Mmm, that was deep

We’ve just endured the 75th [source] ‘famous death’ of 2016, with the sudden and devastating loss of Prince. And I, like many others, felt the need to commemorate the impact he’d had on me, by using Second Life to create a tribute.

Most of the time, when I do this, I’m of the opinion that Simple is Best. Here is my Prince tribute, as posted on Flickr: 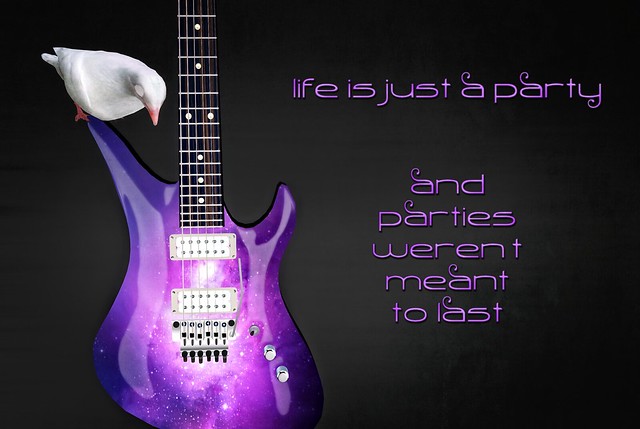 A purple guitar, a dove (to reference one of his most famous songs) and a lyric of his that I felt was perfect for the moment.

I do the ‘guitar thing’ quite a lot when it comes to tributes. Or, rather, I think about something the person was known for, and then I try to create my tribute image around that. Here are two more SL-based tributes showing that.

First, a tribute to Les Paul, the creator of one of the world’s most iconic guitars. There was really only one way to remember him, and that was to find a Les Paul instrument in SL. 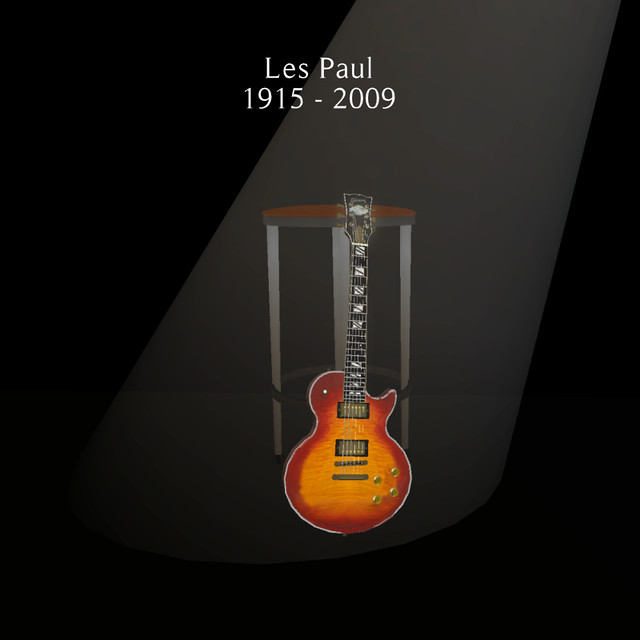 And John Lennon, on the anniversary of his death. The setting is an approximation of the white room and piano from the Imagine video, and – of course – those iconic glasses. 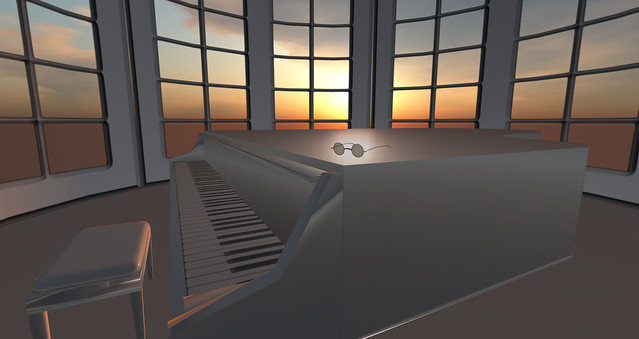 A more recent loss – and one that hit me very hard, considering how much I adore his books – was that of Terry Pratchett. (I adore him so much that I have the ‘clacks overhead +GNU Terry Pratchett‘ plugin installed on this blog. If you have the clacks browser plugin installed, you’ll have noticed that already.) Considering the incredible array of characters he created, I could have gone in any direction with this tribute, but my favourite Pterry character has always been Death, who loves his curries and rides a white horse called Binky. So my tribute featured them. 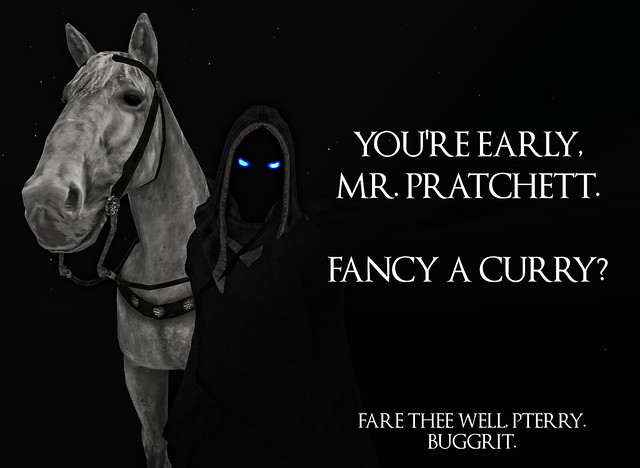 So where does this ‘cult of self’ come in? Well, so much of SL is about the avatar. Shopping and making our pixel dollies look nice is a large part of Second Life, as well as its economy. It’s only natural that, when we create a tribute, our avatar will possibly feature in that tribute. I don’t do it so much these days, as I prefer to pay tribute by using association, but some like to pay tribute by mimicry. We love our idols, and we want to be like them. From our teens, when we develop our first pop/film/sports star crushes, we emulate them. We get the haircuts, we buy the clothes (both the fashion style they have, and their branded merchandise), we band together in groups of like-minded people, we build our identities around the things – and the people – we admire.

So it’s perfectly natural to pay tribute to a deceased celebrity in Second Life with the thing that is closest to us: our avatars. But… does dressing up exactly as that celebrity risk making our tribute all about us, rather than about them? I’m on the fence about this, for those admiration-via-emulation reasons given in the previous paragraph (imitation = sincerest form of flattery, etc), but I still feel a teensy bit… I dunno, weirded out when someone’s tribute runs more along the lines of “I’m going to BE them” rather than “I’m going to be INSPIRED BY them”. It seems to become more about accuracy, about scouring Marketplace for hours to put together the best and most spot-on [insert celebrity name here] look, rather than about capturing the spirit of why they meant so much to you.

Does that make sense?

I mean, hell, I’ve paid tribute by featuring my avatar more times than I’ve not. But each time, I’ve tried to be inspired by the person I’m honouring with the tribute, rather than actually trying to be that person.

Dressing up in partial-drag to honour Holly from Lou Reed’s A Walk on the Wild Side. 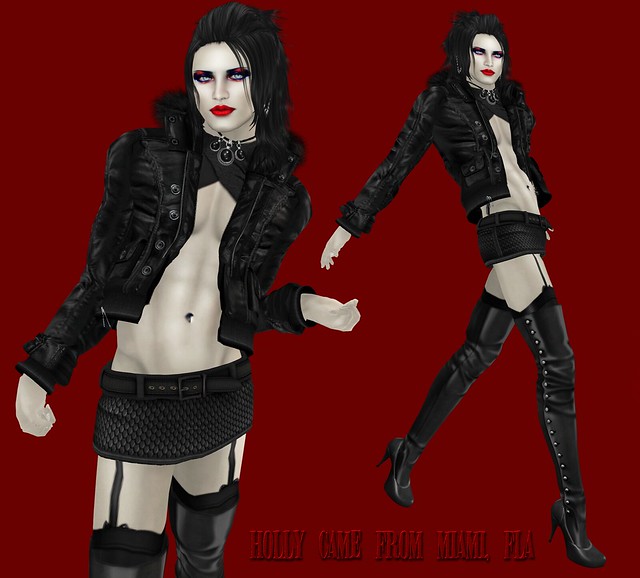 Strutting down a catwalk to honour my fashion icon, Alexander ‘Lee’ McQueen. (I’ll admit that, if I did this tribute again now, I would have taken the spirit of that quote and created a McQueen-inspired outfit to walk that runway in. However, at the time, I was still fairly new to the whole online tribute thing, and I thought it more respectful to pay tribute with a stylish, but sombre, suit.) 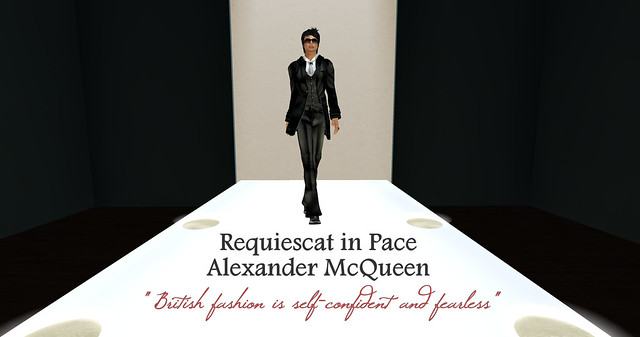 Only days before he died, I’d received Steve Strange’s iconic makeup in a blogger pack. It was only fitting that I honoured the man who pretty much created the whole New Romantic style with the makeup from his most well-known song (also referenced in the chiaroscuro of the image itself) – Fade to Grey. 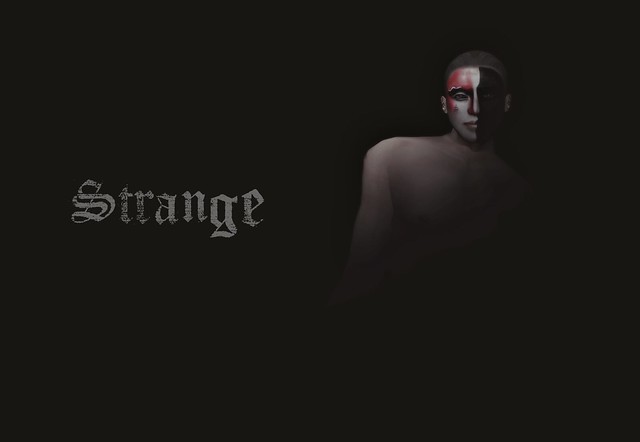 A boy in fur and makeup, protecting the glitter ball until it starts sparkling again, after Donna Summer had died. This one, while on the surface not being particularly much, was all about the spirit of disco, embodied by that glitter ball. 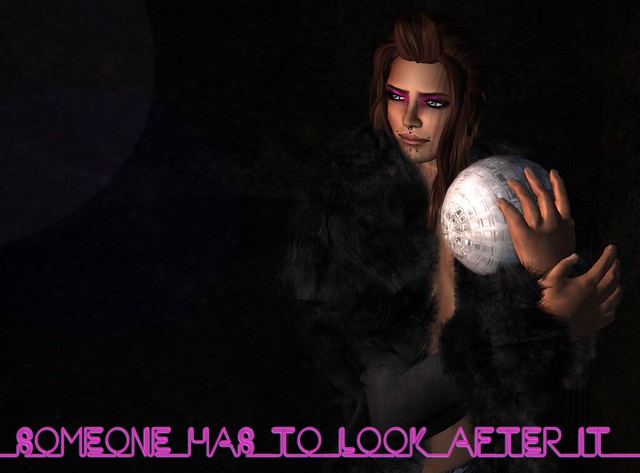 And, finally, the hardest loss of all. How does one encapsulate the loss of Bowie? Many did it by recreating his album covers (notably Aladdin Sane, since the lightning bolt makeup is readily available in SL), and that’s probably – for me – the only “I’m going to be them” tribute that I don’t get weirded-out by, because you’re paying tribute to the iconography that represents  a celebrity, regardless of the fact that you’re being  that celebrity on the album cover). Many of us have already done tributes to Bowie in the past, so we reblogged or re-uploaded those, because hellfire, doing a tribute can be an expensive and time-consuming business, especially if the items are one-offs that you’ll never use again. (Case in point: the Prince tribute cost me L$2000 for the guitar and dove, and I doubt they’ll leave my inventory again.)

But for me Bowie was all about his differentness, and how he made it okay to be different. It was about the stardust he sprinkled over everyone who wasn’t quite like everyone else, no matter in what way. You don’t have to be queer or freaky to stick out like the proverbial sore thumb in a crowd and draw unwanted, negative attention for it. Hell, I was bullied at school because I was bookish and quiet, and I enjoyed classical music as well as the pop that everyone else liked. But Bowie was well-read, he narrated Peter and the Wolf, he sang Brecht, and – without taking into account any other shared differentnesses (is that even a word?) that I had with him – I was drawn to him.

So, for me, my tribute was all about the bright star, and the boy eagerly reaching up to catch the stardust. You can barely see the boy, because he often felt like he wasn’t visible, but he’s there, just yearning for that sparkle. 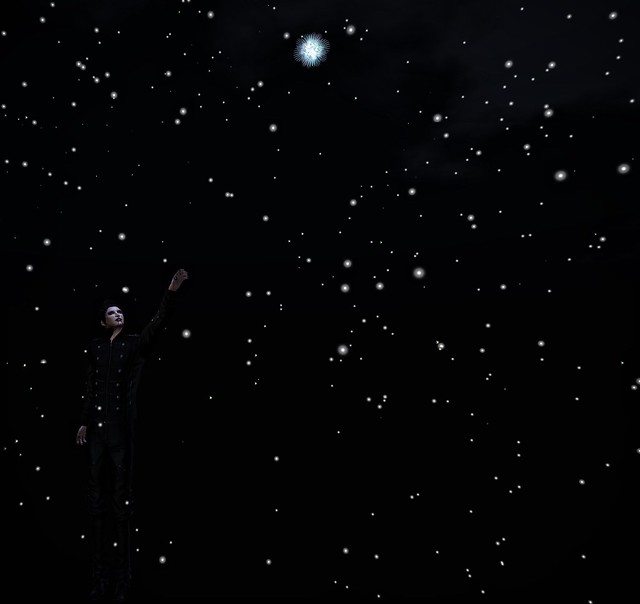 So, back to that cult of self. Of course, our Flickr accounts, our Tumblrs, our blogs, and everywhere else we share pictures from inworld, are all about us and our avatars. One glance at the front page of my Flickr right now will show you I’m all about the fashion thing, and you kinda need to show fashion on an avatar. So I get that, I really do.

But I’m noticing it elsewhere, too, and where I’ve noticed it most is on Strawberry Singh’s Monday Memes. She’s recently started them up again, and that prompted me to go back through some of the older ones and take a look at them once more, remember how I interpreted them (especially the earlier ones, before I had this blog) and so forth. And I noticed something rather interesting.

I didn’t actually number-crunch or anything, but the memes where people got to post a picture of thair avatar tended to get more responses than the text-only memes. This surprised me a bit, since text-only responses are much easier and quicker to make. The difference was even more noticable when it came to posting videos of their avatar. In fact, it was the latest video meme – Dancing in Second Life – that sowed the seed for this post, with almost 60 responses, compared to the 13 responses to the question-only Social Media Meme that followed it*. Yes, social media is something that many people don’t like, so the scientist in me has to say the results were probably skewed by that, and looking back through older memes (before Berry stopped doing them for a year or so) they did garner more responses than they tend to do now, but that’s probably a result of the fact that people comment less on blogs these days (something else I’ve noticed) and prefer to click ‘like’ instead, rather than any lessening in interest.

*The ‘Never Have I Ever’ challenge also garnered 50 responses, but it was the first meme that Berry had done since stopping them, and I would expect the return of something so popular to be greeted with a lot of comments, so I didn’t count that one in my brief look back.

Now, it could just be the cynic in me noticing that (just as the same cynic notices that, when Berry does her big yearly giveaway post, suddenly she gets hundreds of comments more than she usually does) but it doesn’t surprise me. Our avatar is something we identify with, and in most cases it’s our idealised and perfect self. Yes, there are some people who want their avatar to look as much like them as possible, but for the vast majority our avatars are younger, prettier, skinnier, etc. than we are in Real Life. So it’s no wonder that we want to present (and, frankly, show off) this perfect self, this side of us that Real Life doesn’t see.

I don’t really know where this post is going, to be honest. In my rare posts for this tag I usually ramble on a subject and what gets posted is my train of thought as it hits the keyboard. So, I guess, I’ve got in a few of my thoughts about the Second Life cult of self, alongside some other stuff. I’d be interested to hear/read what others have to say about it.