Mmm, that was deep Randomosity The SLife of I

Soon, silence will have passed into legend. Man has turned his back on silence. Day after day he invents machines and devices that increase noise and distract humanity from the essence of life, contemplation, meditation.
– Jean Arp 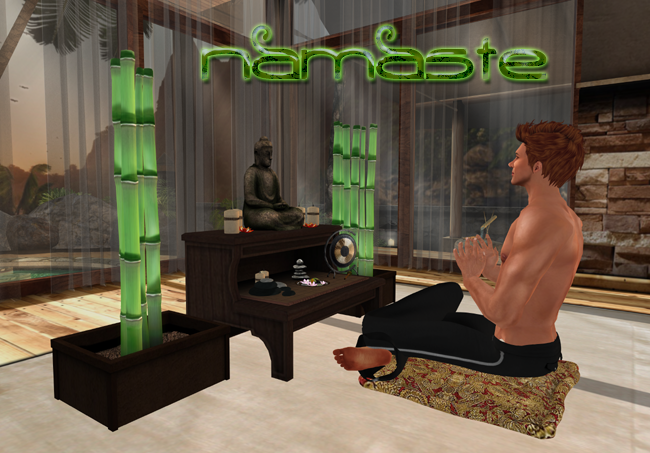 The quote at the top of this post is, I’ll admit, somewhat ironic, given that I’m writing this on one of said distracting devices: a computer. However, there is much to be said for the immersiveness of Second Life (which, of course, needs a computer to access it) and how, even when sitting on a beach in SL one can feel a sense of the same relaxation one achieves on a real life vacation.

We’re a quirky bunch, us avatars. Many of us dress in SL according to the RL seasons. If I’m chilly sitting here at the computer, I’ll pull on a sweater, but then… so will Skell. Daros prefers open spaces inworld, whereas I would rather be surrounded in some way, be it in a house or a forest etc. We decorate our SL homes for various holidays (for us that would be Halloween and Christmas).

Inworld is a mirror of Outworld… or is it the other way around? Let me tell you about something that just happened…

Roughly half an hour ago, I found myself on one of our platforms with a rising and rather intense urge to DO something. But I didn’t know what. I quizzed myself: do I want to build? No. Do I want to put together a fashion plate? No. Do I want to read a book IRL? No. Housework? Hell, no! Sleep? Already had a nap.

I was getting frustrated and feeling pretty restless. ‘Caged tiger’ comes to mind, and it was getting worse. I rarely feel like that, but it’s horrible when I do.

And, just like that, I realised what it was that I needed to do. I needed to breathe. So I went to my beautiful reBourne Bali  skybox, sat down in my meditation room, and did just that.

Back just before Christmas 2012, a friend introduced me to meditation. She patiently guided me as I sometimes IM’d her wondering if I needed to sit a certain way, or breathe a certain way. The answer was no; there’s no right way to meditate. You find your  way to do it. The only thing that’s important is to be calm and still, and not berate yourself or get frustrated if your mind wanders (as it inevitably will). Her method of finding stillness (becoming a lake) didn’t work for me. Every time I tried to become a still lake, I found myself rising, until I realised my stillness was a slow-drifting cloud in the sky.

I meditate twice daily, both for very short periods (just 5 minutes as soon as I wake up and 10 minutes right before I go to sleep), for which I use a simple meditation bell app on my phone. It can be incredibly difficult to still your mind on first waking (all those sleep thoughts still being sorted!) but when mine wanders I just gently bring it back and carry on. Dispelling tension is also hard (I carry mine in my shoulders, facial muscles, and scalp) and I’ll sometimes focus a full meditation session on simply doing that.

The method that I use is a simple one: I focus on my breath at the point where it enters my body (just inside the tip of my nose). I feel the coolness as it enters, and the warmth as it leaves. Simple as that. This YouTube video was the one that eventually gave me that method, and it works perfectly for me.

I remained sitting at my computer desk for today’s extra meditation, simply cupping my hands in my lap with thumbtips touching, and placing the soles of my feet together on the floor (closing the circuit, as it were). With the big mindfulness bell at this website set to ring every minute, I sat and breathed for 20 minutes while Skell did the same in SL. As well as the sound of the bell, I also had the ambient sounds of the forest and birds that come with the Bali skybox.

And the caged feeling melted away :-)

So yes, there’s a hell of a lot to be said about the immersiveness of Second Life. Even though I was sitting in a desk chair behind a computer, I was also sitting in a beautiful house in Bali with birds chirping in a dense, distant forest and a sonorous bell chiming as I became air.