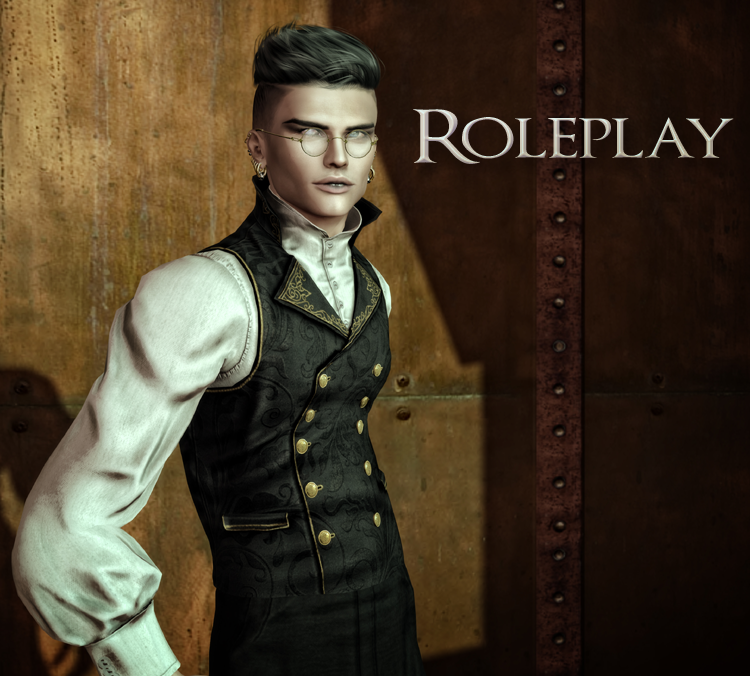 I roleplayed for many years before coming into Second Life. Creating backstory, character, and plot are abiding loves for me, from my early days of AIM chat room RP, through 16-hour text-based sessions in a MUSH environment, to creating fully-realised characters within the visual arena of Second Life. This page is a repository for my roleplay-related musings.

It will include my personal roleplay character sheets and limits (for easy reference inworld) and some Roleplay 101 posts; basic do’s and don’ts for anyone interested in roleplaying.

These apply across ALL roleplay areas

– Most important of all: Daros always comes first for me. Not only is he my partner in SL; he’s also my oldest, closest, dearest friend in RL, and I will let nothing and nobody hurt him or come between us.

– No collaring. If captured, I am not your slave, and I will try to escape. Repeatedly.

– No sex. The only person who gets jiggy with me in Second Life is my partner. No exceptions.

If you try any of the above on with me, I’m gonna let you know in IM that those are not on, OK?

For anything else, IM me & we can probably come to an agreement.

– No metagaming. Just because my tag, meter or profile says I’m a thief or what-have-you, that doesn’t mean you can call me one in RP. If you haven’t seen/heard/been told it IC, then you don’t know it. Likewise, if I think it, you don’t know it. You’re not a mindreader. Base your RP with me on what I do and say and how I look, not on what you can read above my head or in my profile.

– I’m into para-RP. Do me a favour and try to reply with more than just netspeak, yeah? I always give my best but if my best is met with no effort on your behalf I’ll be less inclined to RP with you again.

What’s para-RP? Roleplay that involves full paragraphs of writing, such as this:

Setting the heavy amp down on the sidewalk close to the wall Skell unclips the guitar case and crouches down to extricate its precious cargo.

With the guitar resting across his knees he looks up and then straightens, hooking the strap around his shoulder. He drags the open guitar case closer to him and glances down at the few coins and crumpled low-denomination notes that he’s stuck to the inner lining (he’s not dumb after all). Resting one booted foot on the open lid of the case he begins to tune up.

After a few minutes he leans down to plug the guitar into the amp, confident that he’s tuned to as close to perfection as he can. The sound is louder now, sweeter; a warm reverb through the concrete and bricks around him and he closes his eyes in momentary satisfaction, drawing the pick thoughtfully across the strings.

Moments later he begins to pick out the opening notes to Metallica’s “Low Man’s Lyric”. He’s not going to sing, but he’s worked out a decent enough all-guitar version of the song, and he closes his eyes as he gets into it, forgetting the occasional passer-by as he usually ends up doing. The slow song drifts down the street: an anthem for his life since he moved here.

(No, I don’t usually go on for so long. I was setting up a scene there, but you can expect at least something along the lines of one of those paragraphs from me when I roleplay. And yes, I respond and type quickly, so you won’t be left hanging for ten minutes between poses from me.)

– No button-mashers. Roleplaying a fight is far more interesting – for both parties – than just bashing buttons faster than the other guy.

– Don’t shoot/stab me or try to capture me without at least offering some form of roleplay leading up to it.

– If you need to go AFK or briefly abandon a roleplay session to deal with RL stuff, please just tell me. If I’m left standing for more than 30 minutes without any response from you whatsoever, I will consider that roleplay finished, and I’ll move on.

– I’m gay and so is Skell. Depending on character and situation, Skell might flirt, but he’s already taken and he’s not interested in the ladies. I don’t care if you have a supernatural ability to make your ladyparts irresistible to ALL men. My dick has supernatural powers that make it only attracted to non-ladyparts. Got that?

– Don’t flounce, mid-RP, if things aren’t going your way. I’ll only roll my eyes at you.

Roleplay Log #2: When you leave the scene with a smile on your face