Mmm, that was deep Randomosity 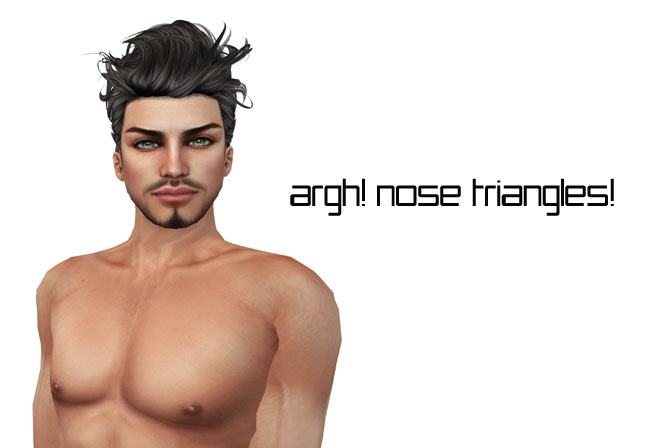 There is an SL-based challenge – started by Genkai Tesla – currently doing the rounds on Flickr, called the SL Bare Face Challenge. It seems to take its inspiration from the recent RL ‘no makeup selfie’ challenge for cancer awareness, and – since the world (and the virtual world) is obsessed with looks it’s providing an interesting insight into how people present their avatars to others.

The rules are simple: post an unedited shot of your avatar, bare-faced. No lashes. No makeup. No enhancements. No Photoshop.

Some guys are taking the bare face idea to the point of removing facial hair, but – to me – if that’s something you normally wear then you may as well leave it on (either that or you’d have to remove your eyebrows, too!). Most of the time these days, when I’m not doing the fashion thing, Skell’s got some face fuzz going on. However, since I do  also do the fashion thing, there’s a second side to him: the smoother and more boyish andro-look. Hence I took two shots and combined them (click here to view that on Flickr).

This is everyday Skell: 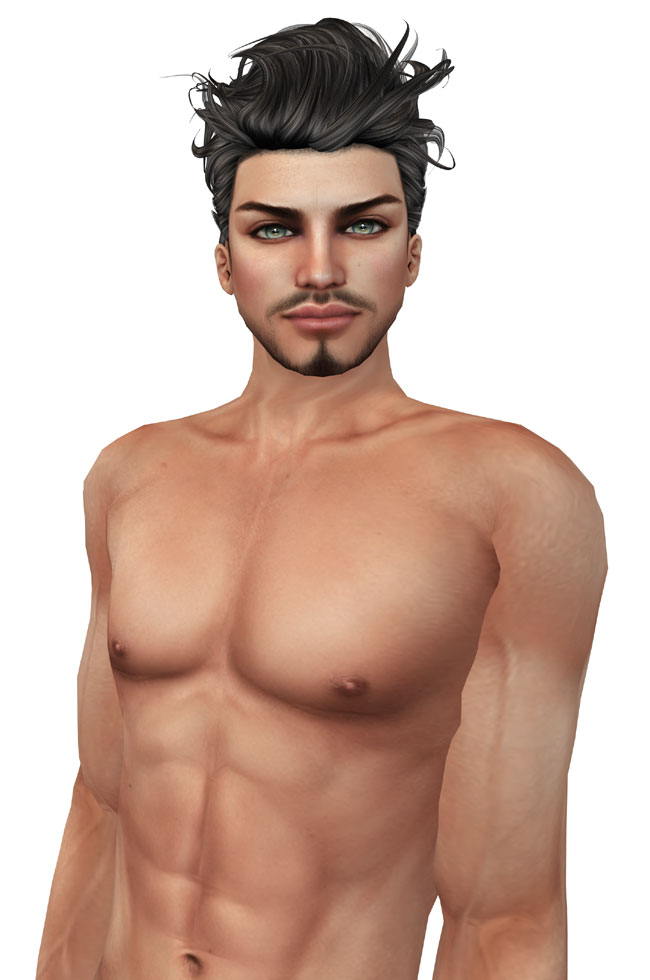 You have to agree, that is a fucking amazing skin. I practically live in it these days. But yeah, like every other skin that I wear, I have nose triangles. Those are one of the very few things that I edit in Photoshop for this blog, because they’re a flaw in the base LL avatar mesh. Normally, I would also smooth out the lumps and bumps where the side of the torso meets the arms, and I’d ease out (as best I could; I only have an ancient version of Photoshop with no liquify option) the worst of the angles on the shoulders.

Here, for comparison, is fashionisto Skell: 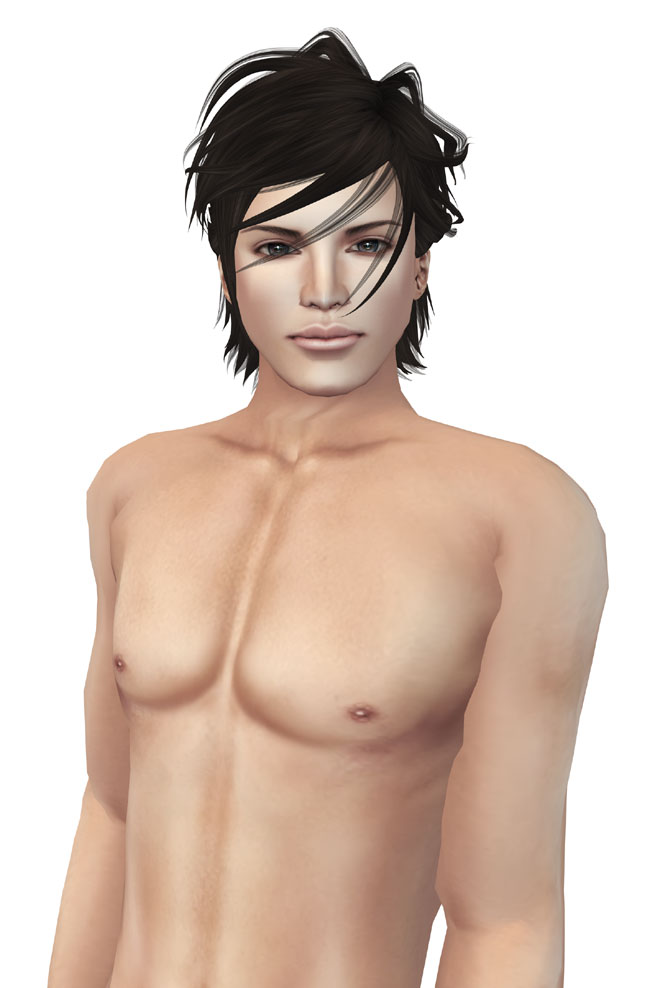 Exactly the same pose and the same shape (although, interestingly, his face looks rounder and his shoulders look slightly narrower; interesting, isn’t it, how the illusion of youth transfers from face to body?). This skin provides a much better base for layering makeup, as do many of my other more andro skins.

Now, the rules for this challenge state ‘no Photoshop’, and people are getting very  creative with all kinds of ways to show their avatar in a good light. This intrigues me. We all squirm a little uncomfortably at not being seen at our best (you have no idea how hard it was for me to let those nose triangles go!) and I can’t help but wonder if that’s not a companion to the fact that in Second Life we can be  the perfect creatures that we are not in real life. Letting go of that perfection feels like being the real ‘us’ rather than escaping to the place where we’re (very likely) a lot happier with our looks.

I’m going to go through some of the entries in the Flickr group and make a few notes about them. Please be aware that, if the original images are removed from Flickr by the people posting them, they won’t show up here.

Firstly, a stunning example of ‘bare face’ from Maya Reyes. This, for me, is the standout of the entire group at the time of writing this post.

That is taking the challenge as-is. An incredible avatar wearing a gorgeous skin (I’m reminded of the beauty of Alek Wek here). Yes, those do look like mesh ears; in fact that could also be a mesh head, since the crown of the SL head isn’t that smooth! But, if a mesh head (or mesh body) is something that you always  wear, then – shorn of makeup, lashes, piercings, etc – that is the ‘basic’ you. I think mesh heads are in keeping with the spirit of the challenge, as long as they are a permanent part of the avatar taking part.

Another lovely entry (and one which makes use of Windlight to minimise flaws in the avatar – more on that in a moment) is this shot by Alana Roses:

Very much the ‘English rose’ look, but take a closer peek around the nose. Yes, I see nose triangles! That’s a genuine bare face without Photoshop, but hmm. Don’t you think that choosing a Windlight preset that minimises the avatar’s natural flaws is actually enhancing  the avatar? While it’s not a physical enhancement, it’s still an attempt to improve on what is seen by the viewer. I’m not knocking this shot by any means; it may be that Alana always uses this kind of Windlight, so it’s in keeping with her usual style. I’m just fascinated by how people are both getting creative with ways to ensure they look their best, and why  they want to look their best.

I used a basic, full-lighting preset because, for me, this challenge was supposed to represent my avatar looking blearily in the bathroom mirror at 6am. No lovely soft light to make him look great; just full-on daylight.

And then we have the jokers. There are always one or two ;-) This one from Miss Yoon, subtitled, “not much left of me, sorry” gave me a giggle:

And then, of course, we have the ones in full makeup. I’m sorry, Talija, but this isn’t ‘bare face’:

I’m not bitchin’; just going by the rules, which state “no makeup”, and you very clearly have full makeup on: eyeshadow, mascara, eyeliner, blusher, and lipstick.

Finally, of course, we have the people who post ALL of their shots to EVERY group they’re in. There are already two full-body fashion shots in the Bare Face Challenge group, and I wonder why people do this? Is it because their finger slipped when ‘adding to group’? Is it because they use a script of some kind to save time by adding every shot they take to every group they’re in (like the people whose ‘following’ count you can watch rise by about 200 people if you refresh their profile every ten seconds; you know the ones – they’re following around 1500 SL avatars)? Is it because they know that group is likely to grow into a huge and popular one (like the “What’s your digits?” group did a few years back) and they see it as a great way to promote their fashion blog?

I really don’t understand this. I see images of fashionistas in the Pretty Boys Flickr Group (here is an example of that. Note the end of the URL: in/pool-sl_pretty_boys. What on earth does this sexypose pic of a female avatar have to do with pretty boys? Scroll through that group and you’ll see loads of female fashion shots). Not a male in sight in those pics. Why post your female fashion shots there? Pure mistake? Trying to catch someone’s eye? (And yeah, that latter is cynical of me, but I’ve been  in large menswear stores and watched as female avatars twirl and pirouette in front of solo males, giving up and moving on to the next solo male when no interest was shown. When they got to me, I’d usually just ask them to stop blocking my view of the vendors, because I was trying to shop.) I really dunno. Makes me scratch my head and shrug.

You can find the Bare Face Challenge Flickr group here. Why not take off the slap and have a go yourself?

2 thoughts on “The bare-faced cheek of it!”