Some time ago, Berry Singh did a Monday Meme about Your SL Pet Peeves. This was my entry (linking you to the Flickr pic, as that was where the discussion was, and we’ll call that part 1 of the series). However, that’s not all of my pet SL peeves, by any stretch of the imagination, and since I’m desperately trying to avoid getting a Twitter account for Skell (don’t give me the opportunity to sound-off quick and easy like that; a blog post takes more thought!) I decided to put a new category on the blog. So here it is. 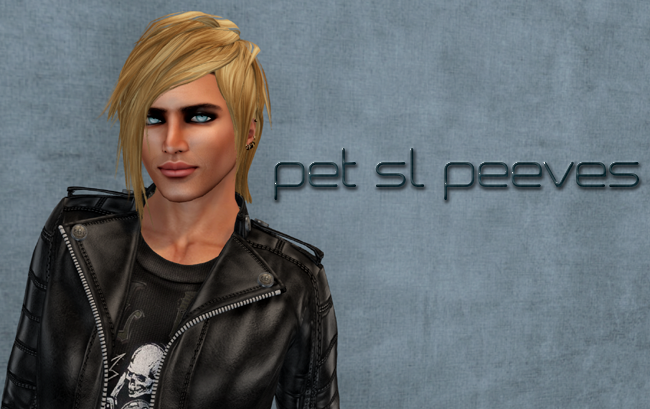 01: Dear blogger, part 1 – I know you always wear those eyes, but WHERE ARE THEY FROM?

This one drives me batshit insane, and it’s one reason why I mention everything that I’m wearing in my credits. Invariably, when I check out a blog post and really love one thing in it… that one thing is the one thing the blogger didn’t mention. So, you’re featuring the shirt, pants, hat and shoes? Great! But don’t you also have skin/ hair/eyes/ jewellery/stretched ears/tattoos/makeup/what-the-fuck-else on? If you really do wear all the same basic stuff all the time, then how about a page or link to a post wherein you detail all of that stuff, huh?

I’ve lost count of the number of times I’ve tilted my head, squinted, scratched my chin, puzzled, and finally given up when a blogger’s credits for the amazing X that they’ve mentioned run thus:

What the fuck is FG? Fat Gits? Fluffy Grommets? How in hell am I supposed to know that’s actually the Finagled Grabbit store if all I have is a cryptic clue?! Giving me a SLurl is good, but stores move around a lot in SL. I’ve seen blog posts and gone almost immediately to the location given in the post, only to find out the store moved on weeks ago and the blogger was using an old LM. For god’s sake, include the full creator’s name in your credits, so I can check their profile picks for their current store location!

I’ll hold my hands up and admit that I did this myself once, but only once. I put a post on Flickr that included a skin from BND. Someone asked me in the comments what BND stood for, as they’d searched and couldn’t find anything. I went into the item properties, found the creator’s store info, and realised it was actually Bird Next Door. That taught me a valuable lesson, and I’ve always tried to include as much info as I can since then.

Oh god, this happens rarely, but when it does, it’s an instant put-off and a lost sale for you, dear designer. I’ve demo’d items with lots of alphas that had an alpha-textured DEMO box surrounding them, with the result that the alpha-sorting glitch left me unable to see the item without fiddling with Hide Selected in the Advanced menu to remove the box.

I’ve demo’d hair and headgear with DEMO pasted right in front of my face (do you even realise that customers need to see how the hair/hat/etc looks with their face?!). Likewise, I’ve demo’d hair and headgear with a ‘cute’ facial attachment (enormous twirly moustache) or other annoyingly-distracting attachment (giant salon hairdryer) that leaves me unable to see what the item actually looks like with my face as it normally looks. 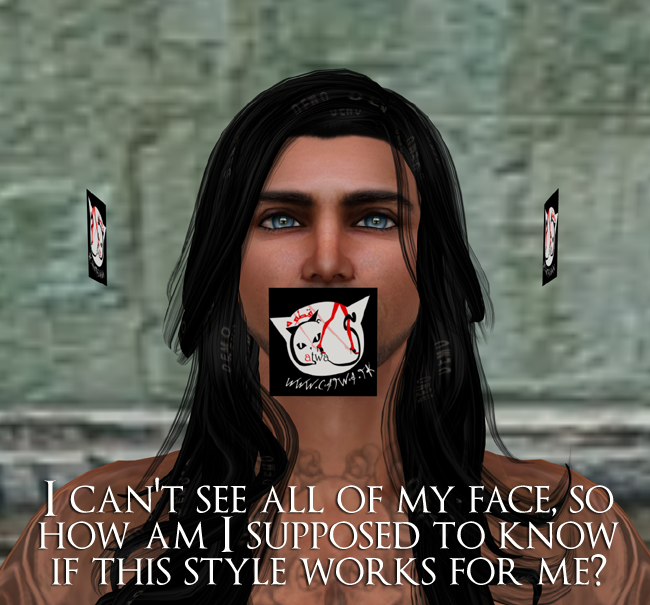 People, I ditch those demos so fucking fast, you wouldn’t believe it. Sale LOST.

There’s one designer whose demos drive me fucking crazy, and it’s the reason why I never open or try on demo packs in the store these days. I always teleport home now. When you ‘wear to unpack’ the demos, your avatar is instantly animated and a whole scene rezzes around you. You’re sitting in a barber’s chair and wearing a giant bib, with a mirror in front of you, and you’re left thinking… what the fuck just happened?

Also, animated unpackers can mess with AOs and poses: 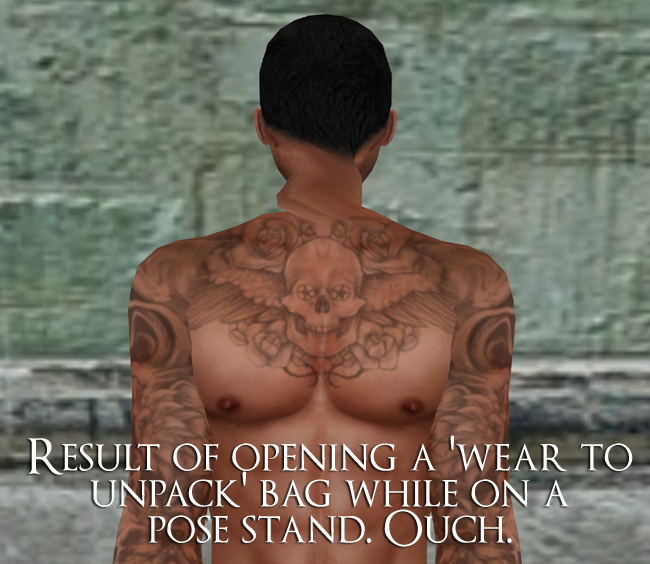 A bag or box that you hold? Fair enough. A lot of people do want to unpack and try on there-and-then, and wearable unpackers are great for those that don’t want to TP home. But some designers go a tad over-the-top. Yes, it’s brilliant and I can appreciate the cleverness and the work that went into it, but when you make me look like an absolute prat in the middle of a crowded store? Nope.

Yes, I’ve been guilty of it myself on occasion, but that’s usually because the location is so laggy that I can’t move for a few seconds after I arrive. I have Firestorm set so that I’m always flying after a teleport, for the simple reason that I got so sick of flailing like a landed fish on top of some loiterer’s head. At least if you’re already flying you can hit the Page Up button and fly gracefully into the air instead of that awful, embarrassing “HAAAALP!” animation the Lindens so kindly gave us when we’re completely stuck.

But I’ve seen avatars standing at the landing point for tens of minutes. Sure, they may be camshopping, but for heaven’s sake, move a few steps away from the landing point so other avatars don’t end up in a flapping heap on your head!

This happened last night, so it makes its way into today’s post. It was frustrating, and ruined a good roleplay session for me. I probably have non-roleplayers reading this, so it needs a bit more detail, to explain how meters and combat work.

In Venexia, a fight was looming between two vampires and three (human) Paesani: myself, Daros, and Bianco – the leader of the Pae. Both Daros and Bianco have Default Combat Mode set on their meters, but I’m Non-Combatant. Non-com means I don’t use scripted weapons; rather I roleplay my attack or defence, and then use dice rolls to determine the outcome. I’m non-com mainly because I absolutely detest the usual button-mashing fighting style. If you’ve ever seen a standard metered fight between melee weapons, it’s a blur; both players swinging wildly all over the place. Sorry, but that holds no appeal to me whatsoever (also, I find it so disorienting and confusing that it ruins the RP for me; you have to enter mouselook and use WASD or the arrow keys on your keyboard to just run around, flailing the weapon and hope you land enough hits to take down the meter of your opponent), and the rules of the sim require that combatants respect non-com’s wishes for RP and dice fighting.

An aside: Many roleplayers look down upon non-combatant status and the roleplayers that use it. The main reason for this? Those roleplayers spend hours working on their fighting skills so that they almost never lose. When facing a non-com, though, the outcome of each part of the fight is left to the pure chance of a dice throw. In other words: they stand a much stronger chance of losing. And if there’s one thing the people who spend hours working on their fighting skills don’t like, it’s losing. As a result, non-coms usually find that other roleplayers avoid them, because so much SL RP is about bolstering egos, and if there’s no possibility of doing so (by winning) then they won’t even bother approaching a non-com, regardless of the fact that the non-com might be able to give them the best roleplay experience they’ve had in months. It is  perfectly possible to roleplay without every single RP session devolving into a fight, just so you can up your ‘won’ stats on the meter, dude…

Bitter? Me? No, just slightly hacked off at how many people I’ve met in RP sims over the years who think exactly that way :-/

The SGS meter used in Venexia shows your combat status fully on the second line. Last night, in the lead-up to the fight, for about twenty minutes we were all in a very small area at the docks. Plenty of time passed in roleplay leading up to weapons being unleashed. In that time I’d checked everyone’s meter. Three of them were on minimal ‘hidden’ status (which hides the important aspect of your actual identity, plus your physical stats, but doesn’t hide your combat status), two – including me – were on full meters. One vamp was roleplaying her attack, but the other? Out came both blades, blue particles filling the room, and he was off and swinging wildly.

First, he chased Daros and Bianco, who ran out of the room, so he came at me. I was in the middle of typing my next pose in response to the female vampire who was roleplaying an attempt to stab me, but I stopped and watched as Mr Flaily-Swords swung at me for about three minutes. I walked a few steps to one side, assuming I was blocking the door and he wanted to get out and go after Daros and Bianco, but nope; he kept slashing away at me. You see, when you’re Non-Com, metered weapons can’t harm you. Your stats don’t go down, you can’t be killed, BUT you still see the blood splats that denote a hit. I think he was confused as to why I wasn’t on the floor, but I just sat back in my RL chair, watching in a mixture of confusion and disbelief, until he stopped.

Daros was telling me to RUN, so I did. I legged it out of the room and onto the ship that’s the Paesani safe haven. Still feeling somewhat bewildered that a great roleplay had – for me – been absolutely shattered, I felt pretty down about it all. The male vampire had not only stopped my roleplay dead; he’d also killed the text-based roleplay I’d got going with the female vampire (and, subsequently, her roleplay, too). All for the sake of not paying attention to meters and deciding he was going to take us down NOW. (Again, with the ego-bolstering thing.)

I deleted the half-typed pose I had still waiting in the chat window, and went to bed.

Roleplayers, take just a few seconds to glance over the meters of those you’re interacting with. You could avoid wrecking a scene for them, okay?

Update
I’m closing comments, trackbacks, and pingbacks on this post, as – for some reason – it’s currently attracting some 30-40 spam comments per day. My Askimet filter is catching them, but it’s a fucking pain to keep emptying the damn thing every day.