Randomosity The SLife of I 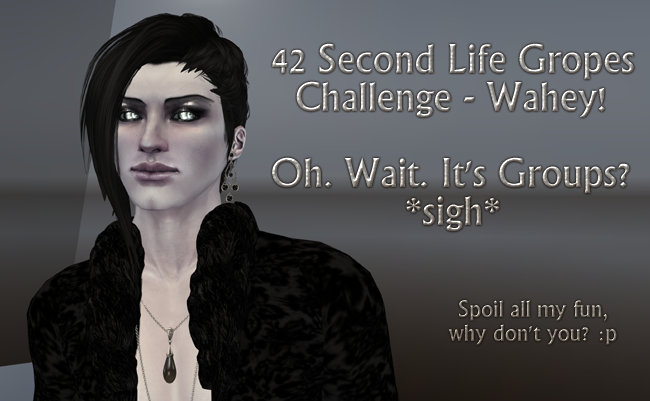 Apparently, this meme isn’t about 42 gropes. And I had my boyfriend all ready to try it out, too! *pouts*

Have you reached the 42 group limit?

Within about three days of it going live, yes! And I’m continually on that limit, which is why it’s so hard to decide which group to drop when I find a new one I really want to be in. Even if we had a 100 group allowance, it wouldn’t be enough! (I liken it to the female handbag/purse dilemma: the bigger it is, the more can be stuffed into it.)

Do you do a lot of group hopping to keep up with all the groups you want to stay a part of?

Sometimes; it depends. I’m still in some groups that I joined years ago, and it pains me to leave them – even though there have been no group notices for months – whenever I need a group slot.

What makes you want to join a group?

A variety of reasons. Group gifts, naturally, but also I (obviously!) need to be interested in what they have to offer. I hop through roleplay groups when I join/leave their sims (likewise any land groups, if I’m renting a home in the roleplay sim).

A lot of store VIP groups have a group fee which you have to pay to join. How do you feel about paying group fees?

I can understand groups charging a fee to keep spammers out (but only if that fee is fairly low). For higher fees, I expect something exclusive in return: either group gifts, discounts, pre-sale access, etc. I don’t mind paying to join a group, especially when they sell high-end items (skins etc). Considering the average price for a skin, something like L$250 to join a skin group that gives out three or five skins to group members every couple of months is worth it.

Name a few groups that you are a part of that you feel everyone should look into joining and share your reasons behind that.

Pure Poison – Fabulous jewellery (and, increasingly, clothing and other accessories). The owner is incredibly generous with group gifts. Currently, the group is L$100 to join, and well worth it. (An added bonus: all the jewellery is resizable and much of it works on male avatars, too.)

IKON VIP – Everyone and their alts should be in this one. Once a month the store puts out a gorgeous free pair of eyes for group members. Currently free to join.

LAMU Group – Home of Analee Balut and ShuShu. Free to join, and absolutely tons of exquisitely-textured clothing offered free in the store for group members (both male and female). I adore ALB’s texturing; it’s insanely good. Hover your cursor over everything and find the free wearable demos. Also, check out LAMU Town. It’s a stunning build, and – if you find the ShuShu store – there’s a load of free footwear, with similar amazing texturing.

Sn@tch VIP – Costs L$200 to join, but it’s the most fun group I’m in. Naughty, sassy, hilarious chat, and sometimes group gifts. This is probably the LAST group I would ever leave.

Gentlemen Bastards Update Group – Because we’re fucking awesome ;-) (Plus, if more people join then I’ll have to make more stuff. I need an incentive!)

Berry left out one other question that I think is rather important, so I’m adding that here:

What makes you LEAVE a group?

Incessant spam messages from the owner. I can’t stand it when a group that I originally joined for store updates begins to spam me with messages about the owner’s DJ gigs, for instance. Or they send out seven notices in five days, all for the same item. The thing that annoys me the most is when a group that I have paid a lot of money to join (in the hundreds of L$) starts spamming me with “vote for us in this SL awards thing” messages multiple times a day. I end up muting group notices for those ones and only checking once a week.

I shall now endeavour to get those 42 gropes in before bedtime, anyway. DAROOOOOOS! *chases after the boyfriend*