You know I have a veil
All covered up, to myself
It’s always there
Now they wanna know…
How does it feel?

Sooo… how have things been with you, my sartorial darlings? Been buying pixel clothes like they’re going out of, er, fashion while I was away? Good, good. That’s what I like to hear. Well, I’m kinda back, and so—coincidentally—are the Monday Memes. So, naturally, I’m fashionably late and doing mine on a Wednesday.

But first, I’m going to tease you with this suit.

No, wait. With THIS SUIT. Because holy shit does it need ALL CAPS.

Choking on style, my dears. Just fuckin’ choking on it. *ahem* Now, let’s hustle into that meme-y stuff, shall we? This week, Berry’s challenging us to a “Never have I ever” confessional. Hrm…

Okay, onto the fashion, because I am all over this damn suit like a bad rash. It’s the Peak Suit by Deadwool, and four variants of it have been out at this month’s Mens Dept. This black pinstripe version, however, is only available at the Deadwool mainstore. As are the coat and the shoes, because (and this is a very rare occasion for me) I’m decked out entirely in Deadwool. Eh, almost. The shades and hair are the exceptions :p 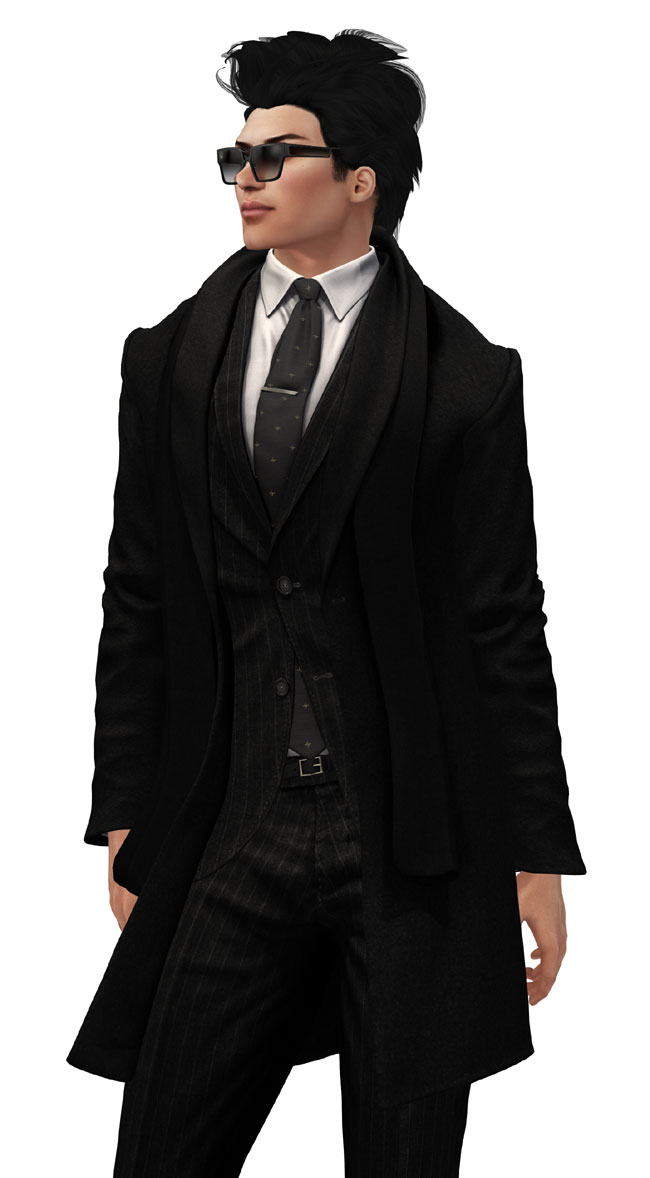 What I adore about Masa Plympton’s work is the subtle detailing. Look at the creasing around the crotch there (yeah, I’m inviting you to stare at my crotch; subtle I ain’t) and where the jacket is buttoned. The shading at the back of the shirt collar, the crumples in the coat sleeves…. GAH!

The shades are by ZOOM. I tried several pairs of glasses and sunglasses with this suit. Okay, I went through about 50 pairs, and that’s not even half of my eyewear collection, but these Mercurium Glasses won me over. They’re just on-trend enough to tip this over from ‘another day at the office’ into something a little more haute. 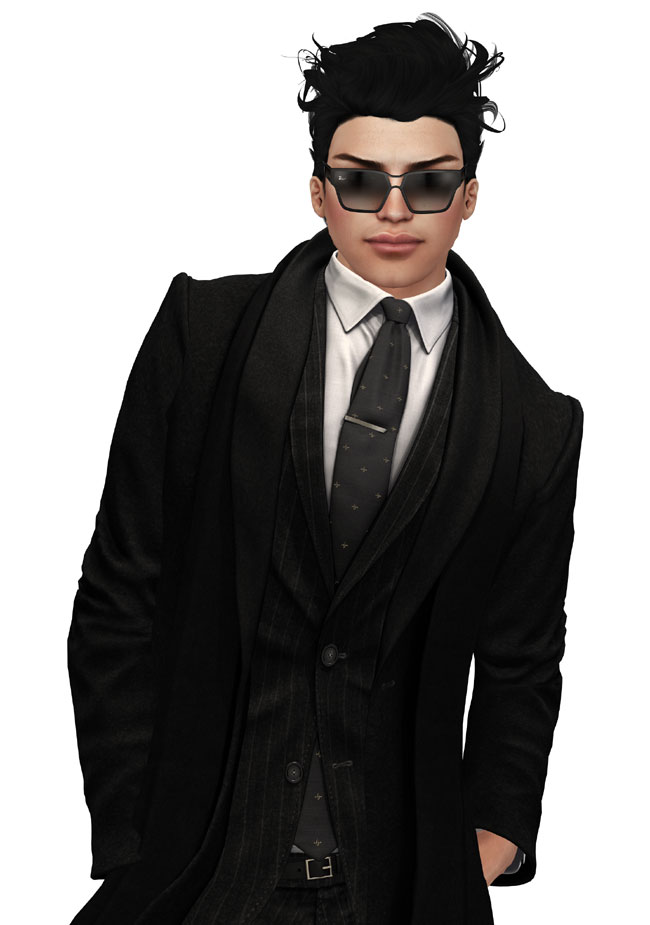 Incidentally, do I look like I’ve put on weight? Because I used the CTRL+zero zoom trick on these shots, and… I’m not sure I like it. I know it’s supposed to get rid of the ‘fish-eye face’ effect, but I kinda think it makes Skell look as if he’s had one pizza too many around the face. Poor lad. I’ll put him on the pixel salads for a few weeks :p 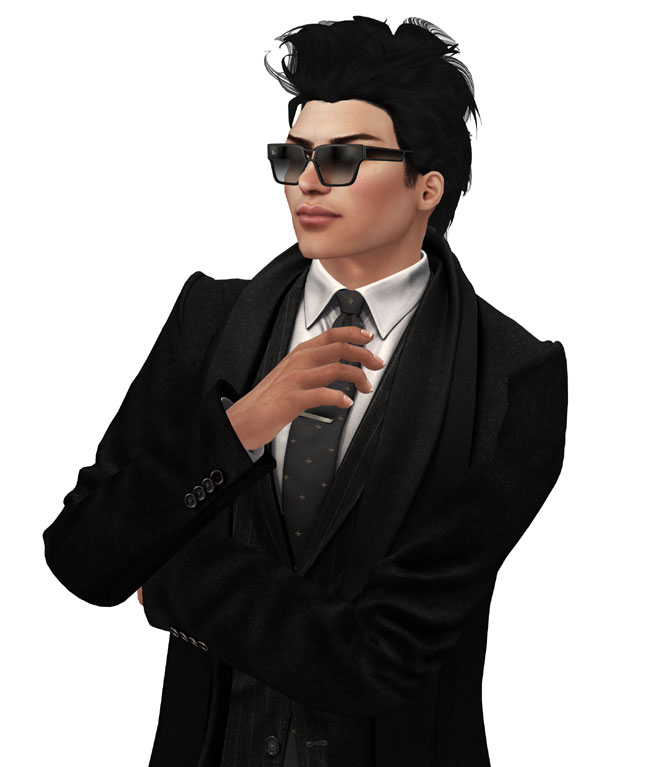 The shoes, like the suit (which, incidentally, has the jacket and pants sold separately) are also by Deadwool. And the coat? Yep, also Deadwool. The suit jacket comes with two versions: the jacket itself (not shown on its own here) and the version to put the coat over.

Go forth and suit-up

2 thoughts on “Welcome to the show, welcome to my life” 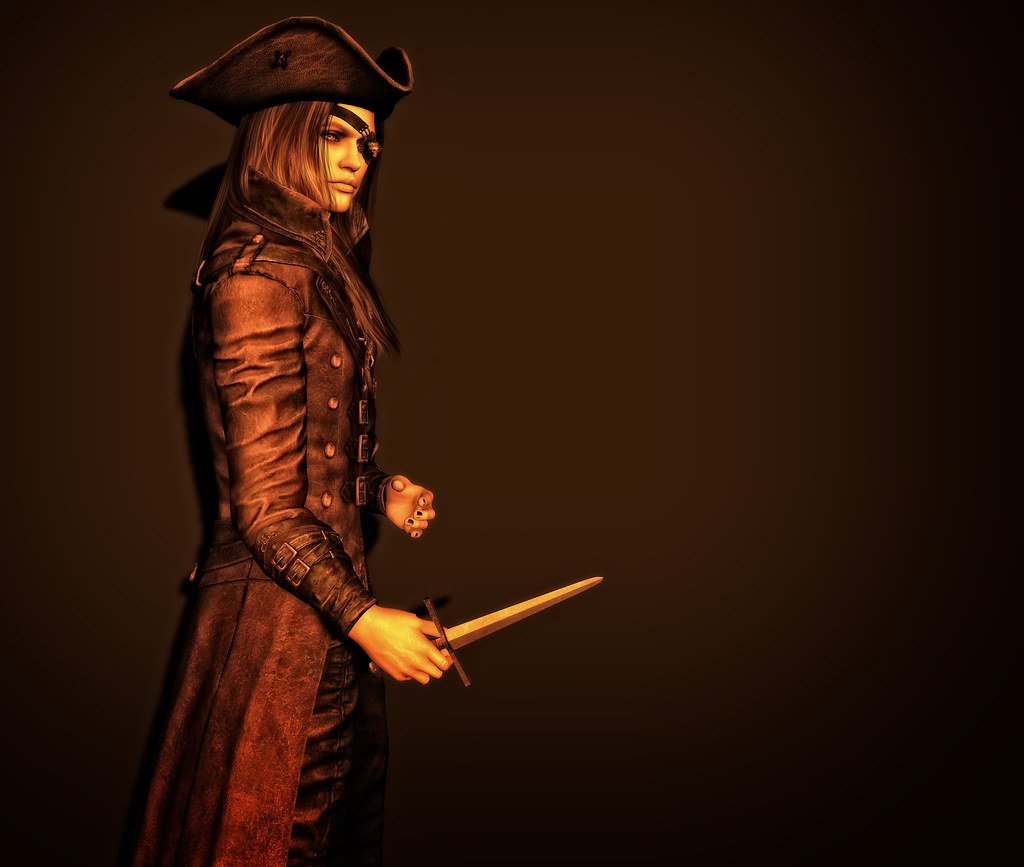 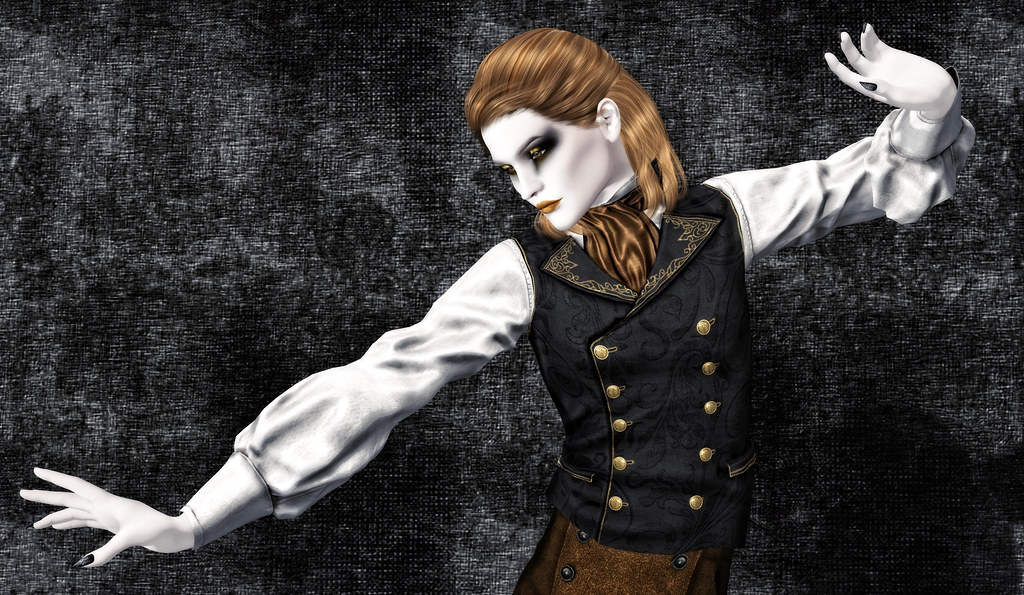