Am I the only one with quirks and traits specific to my avatar? Like others out there, I have (infrequently-logged) alts, and I’ve often said to friends that those alts represent different (infrequently-expressed) aspects of my personality, but Skell intrigues me sometimes because he has habits that I – in real life – don’t.

Case in point: I don’t smoke. I’ve never smoked. In fact, cigarette smoke is one of the main triggers for my asthma and I avoid it like the plague, to the point of holding my breath whenever I have to walk past or behind someone who’s smoking in the street. But in Second Life, Skell smokes. He has ashtrays on every desk that he uses, and he’s often got a cigarette dangling from his hand or between his lips. It’s not an “it’s cool to smoke” thing (because, in my view, it’s not); rather it’s just part of who he is. I guess at least there’s no avatar equivalent of emphysema or lung cancer, but it puzzles me as to why Skell enjoys* doing something that I personally don’t like (and which, in fact, can make me quite ill).

Incidentally, I’ve seen comments on at least one very popular blog that actually tell the blogger off  for glamourising smoking. The comment that sticks most in my mind is one of castigation-by-shame, wherein the commenter informed the blogger she was ‘disappointed’ to see a post featuring cigarettes; basically implying that the blogger had failed in her usual high standards and should be setting an example, since her blog was so popular. And what better way to try and control someone else’s artistic expression than by trying to make them feel guilty?

*And we’re not even going into the slightly-odd depths that are the fact that Skell is his own person who enjoys  doing things. Yeah, so not going there O.o

Speaking of quirks, is there a reason why some female avatars enjoy going shopping in their underwear? I mean, before Project Sunshine and the whole server-side baking thing, that could be put down to varying degrees of bakefail, but now? I often see female avatars skipping and strutting around stores and open areas in bras and knickers. Not bikinis, not slutwear; actual lingerie. Sure, you’ll sometimes see me shopping in a corset and heels, but there’s no way on Philip’s sweet grid you’ll catch me indulging in retail therapy in a pair of boxer shorts or something. Even when I’m wearing a corset and heels I’ll also be wearing pants.

Seriously, was it so imperative that you get to the event as soon as the notecard arrived, that you didn’t even have time to get dressed?! :p

As for this, yeah I know it’s as much an expression of style as my own weirdness sometimes is, but my instant reaction is just, “Honey, why did you even bother? Just leave the pants at home,” – 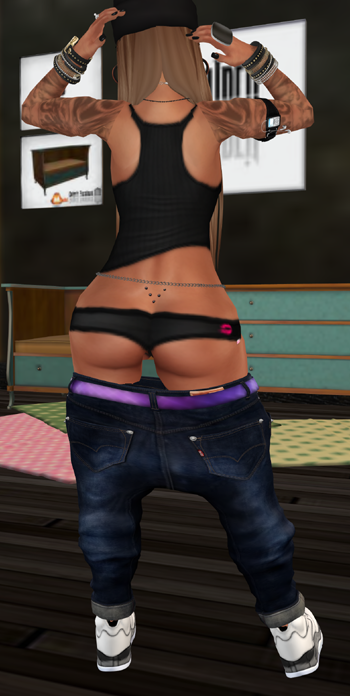 These avatars frequently skip instead of walking. For once, just once, I’d love to see the realistic result of trying to skip in pants like that. Someone please  make a ‘falling flat on your face’ AO…

In non-quirky news, I’ve got my application in for this year’s Steam Hunt. My prize is already made (my god, I’m actually organised, but only because the Victorian skybox that I’ve already blogged is going to be my prize). I’m also going to rez and convex hull my old Renaissance Hunt prize from several years ago: the Fulcanelli  house. It’s just been sitting in my inventory for about three years, which is a shame because it’s one of my favourite builds. Time to update it, reduce the prim count (the convex hull thing) and get it out for sale.