Well it’s been fun times here at Virtual Bloke Towers over the past couple of days. You may have noticed some site downtime, which has – according to my webhost – come about because the site is hammering its shared server with script requests, and overloading the available memory. When I installed a small plugin to analyse exactly what  was causing this? It turned out to be the Jetpack plugin.

Now, WordPress bloggers will know that WP removed all of their stats from installations and shoved them into the Jetpack plugin. The problem with Jetpack is that it is an absolutely massive, bloated plugin which contains something like (at last count) 20 options for your WordPress installation. It is non-customisable, which means that you either have it all or have none of it. The site analysis showed that Jetpack was taking up 60% of the site’s load time, which is unacceptable. So I’ve removed it.

This means the WordPress ‘Like’ button is gone, as are the sharing buttons. Those, plus the stats, were the only things I was using, and yet Jetpack was absolutely killing my server, to the point where my webhost’s automatic kill scripts were killing the site itself for up to 30 minutes at a time. That’s unacceptable to me, so I’d rather live without likes and shares and (*sob*) even stats, if it means:

I’ve also installed a caching plugin, so hopefully the site will get a lot faster from now on, as static HTML pages will be generated and served up, rather than the far more intensive PHP pages that are the WordPress default.

And now, Dear Diary, here is the point where Skell confesses to feeling like a complete and utter idiot.

You remember how, after being hit by SO MUCH SPAM that I couldn’t handle it and blocked the countries of Ukraine and China from accessing the blog? Yeah, that wasn’t an over-reaction, by the way. The spam went from something like 40 comments per day down to about two per week since I did that.

Well, a couple of days ago I sent a ‘You have been blogged’ notecard to the creators featured in a recent post. I logged off soon after, and then came the offline IMs.

The first one was an image link. The second said just, “lol”. And the third said, “thanks, tho”. Flummoxed, I clicked the image link… and it was a screenshot of what that (rather well-known) creator had seen when they pasted the blog link in my notecard into their browser.

It was this page: 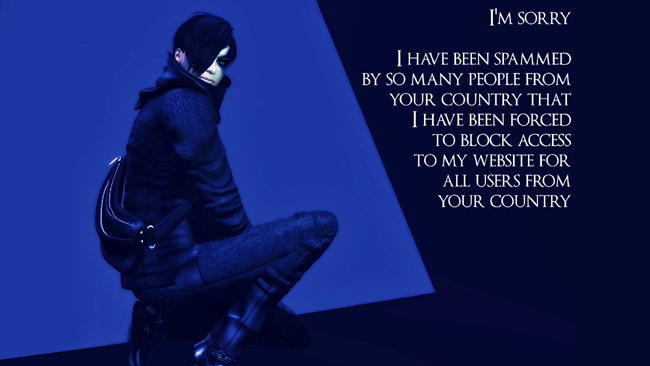 Yep. That well-known creator lives either in Ukraine or China, and they couldn’t access the blog. I was MORTIFIED O.o

I logged back in to tender my profuse apologies, but received no reply, which wasn’t surprising. I then promptly de-activated the country blocks for both China and Ukraine (the only reason I shelled out $35 for the Pro edition of the plugin, but hey-ho). And, within two hours there were five spam comments sitting and waiting for me, from – you guessed it – China and Ukraine. Business as usual, then :-/