Don’t worry about the pilot. He’s… uh… otherwise indisposed.  *toes rug over wriggling heap that’s making muffled sounds* You’ve got ME today, not him! See, there’s this meme thingy that he sometimes puts me into stupid poses for… something about raspberries? Anyway, this week’s meme thingy is all about what I get up to when he’s not arou–

Where was I? Oh yes, this week’s meme thingy is all about what I get up to when he’s not around, and for that… well, he needs to be not-around, as it were. So he’s not. Ignore the thing under the rug. It’s a, um, very big rat that I caught. *nods* Terrible rodent problem in this house. 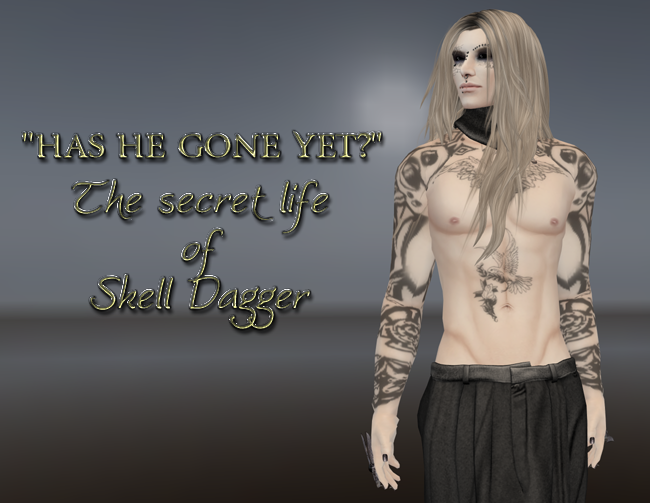 That’s how his day with me usually ends. I just sit around in silly outfits and full-on slap, waiting for him to CTRL+Q. As soon as he’s poufed, I fucking scarper, mate! 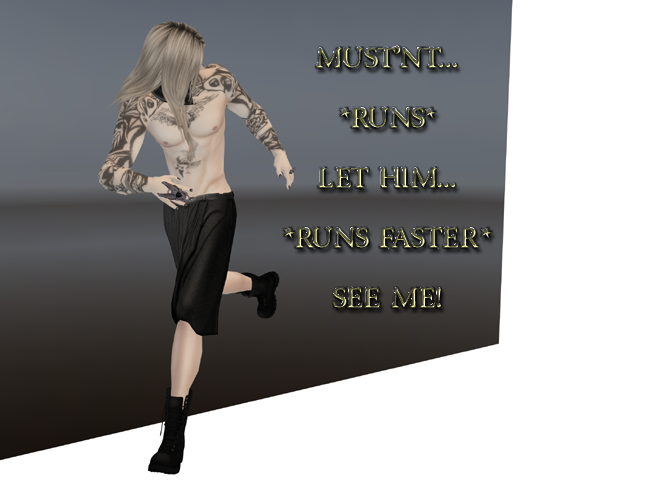 I’m in a constant panic, in case he suddenly remembers something and logs back in, but that only happened once, and I was *cough* with Daros at the time, so I don’t think he minded at ALL. *innocent blink* 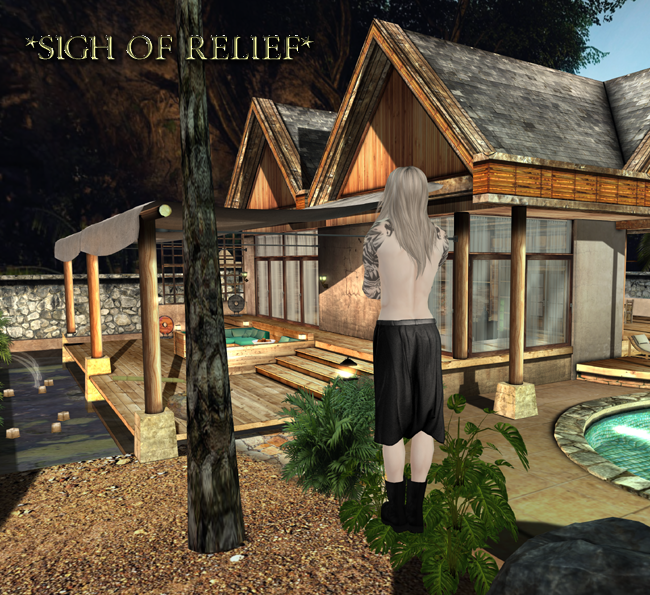 And I leg it into the bedroom… 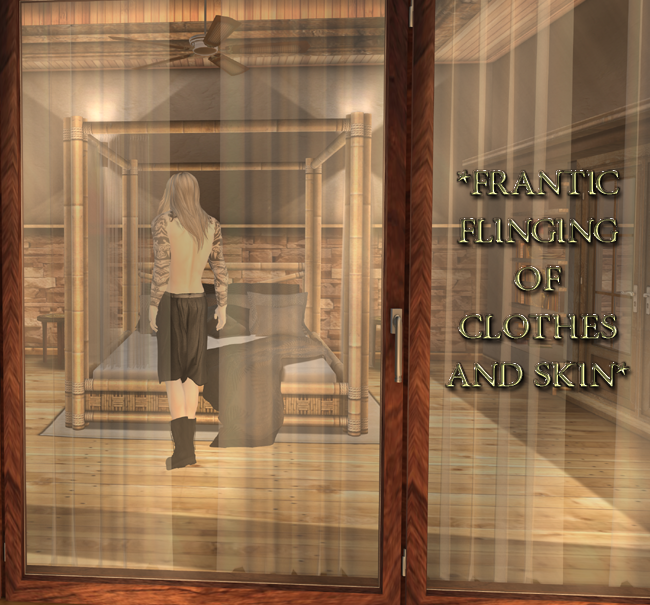 OFF with all that tarty crap, dammit! And back in my own skin. You think we’ve all got those crappy Linden skins underneath? Pfft! We only wore those – every one of us – so you lot out there would make us more and nicer things. And IT WORKED. Muahaha!

*cough* Um, yes, back to the blog post thing. My own skin. 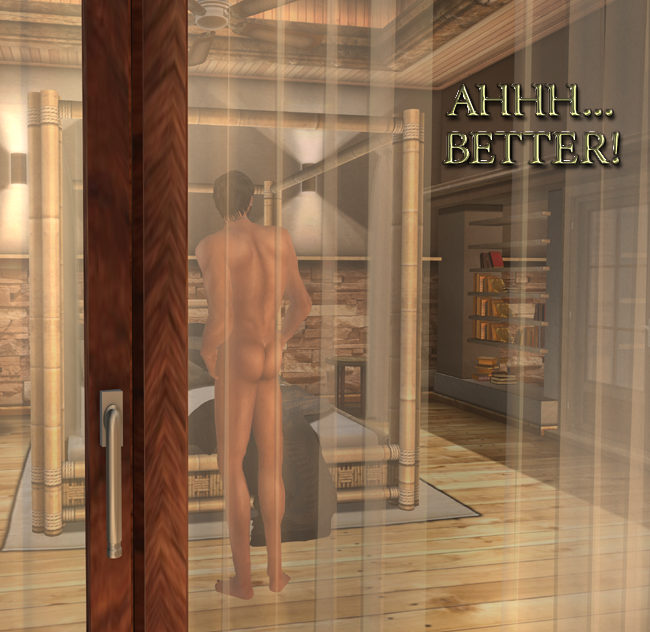 See, he puts me in all this fancy stuff, so when he’s finally gone? I kind of… don’t wear anything.

First, I gotta wash off all traces of the pasty skin and slap… 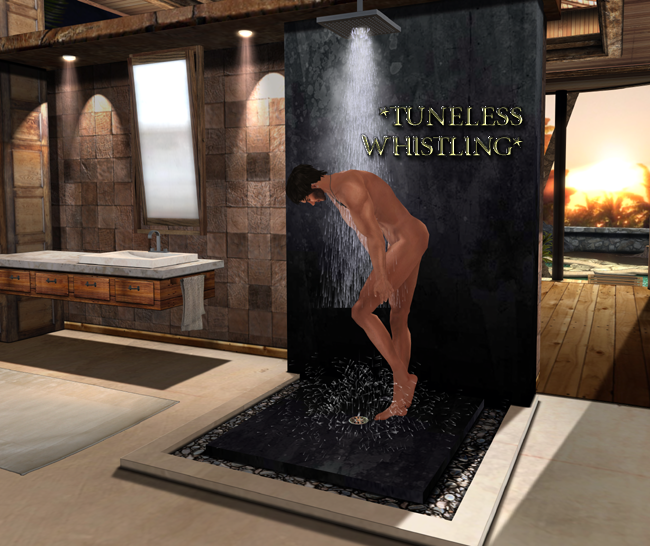 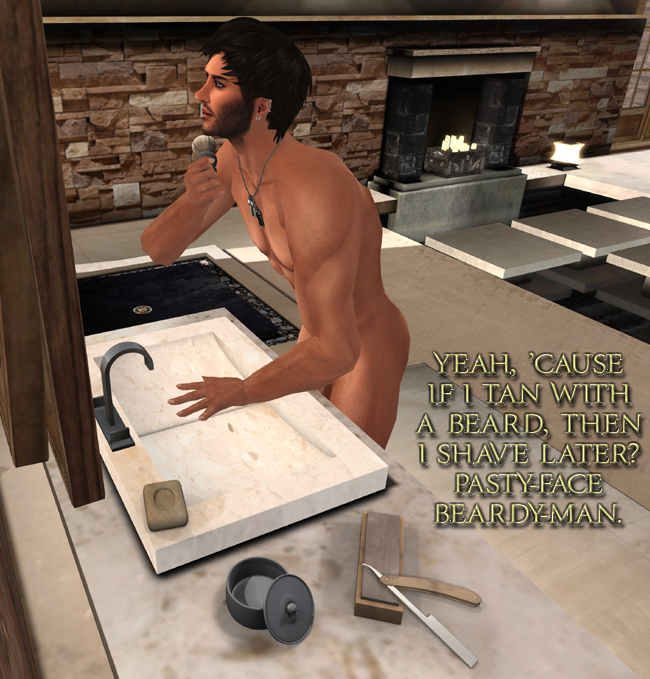 (Uh… do you always tilt your head like that when you’re reading blog posts? Mustn’t half give you a crick in your neck…)

Anyway, then I catch some rays. 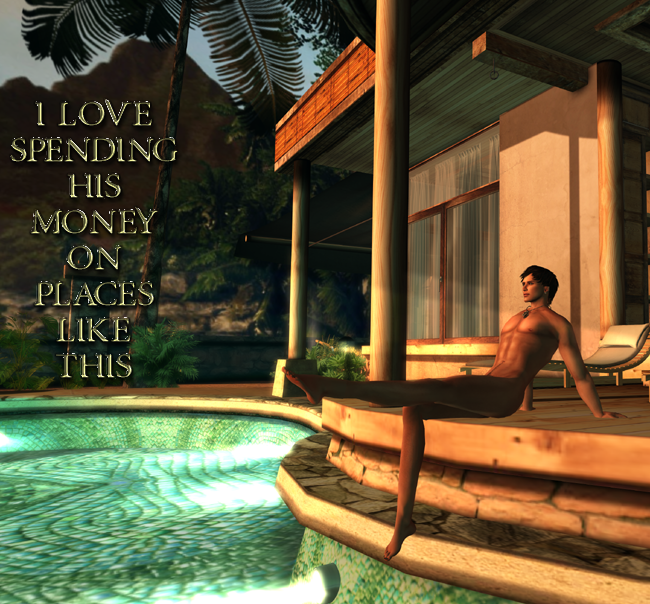 Do I feel bad about him having to work out there in that Real Life place? 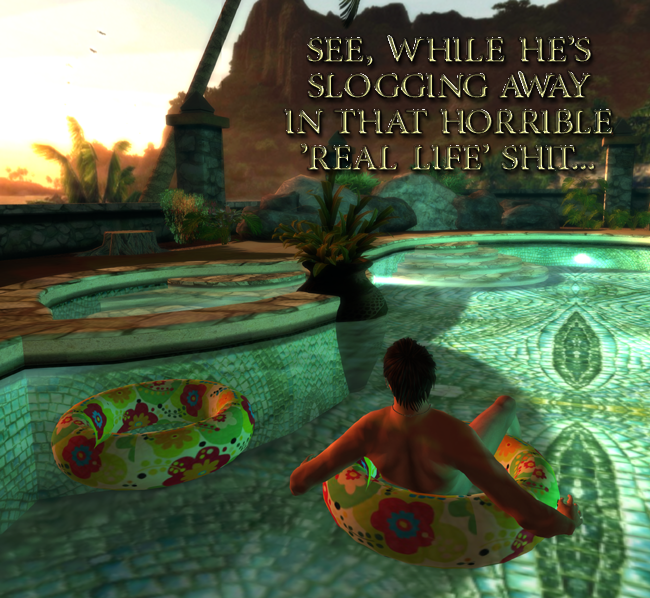 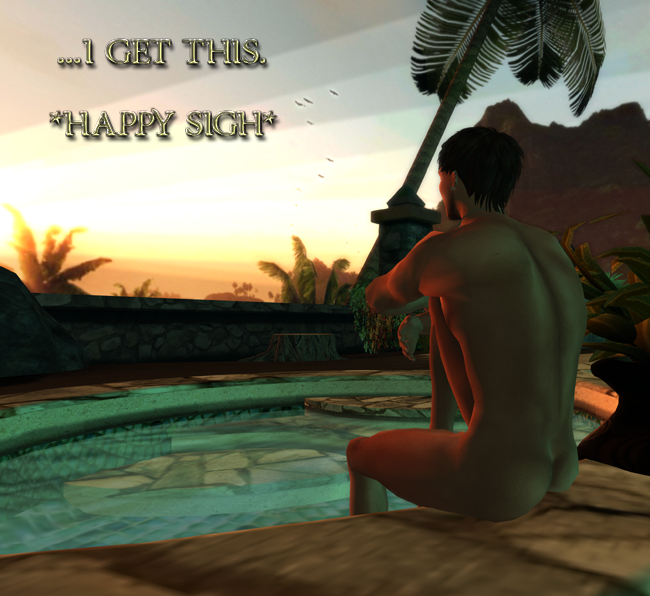 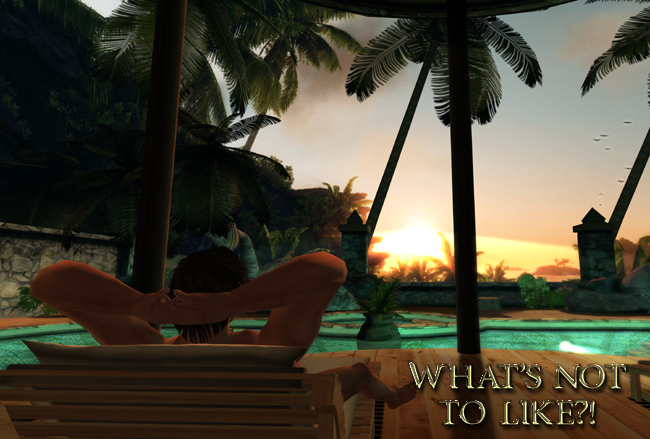 See, I figure it this way: he makes me do all that fashion crap, so I deserve a nice break when he’s not got me all dolled-up, right? 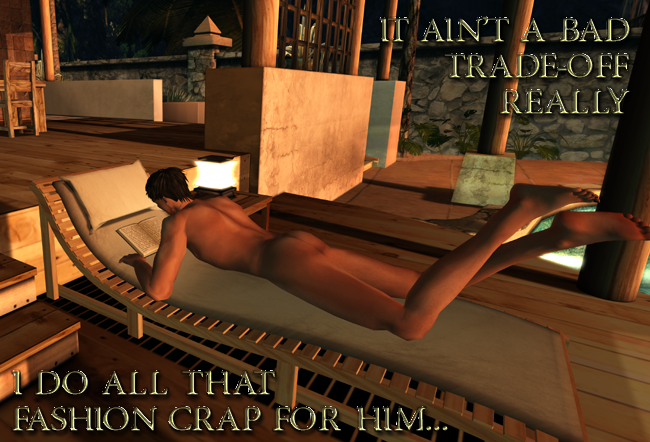 And then… hey, you’re doing that tilty-head thing again. (Also, why are you screaming?) 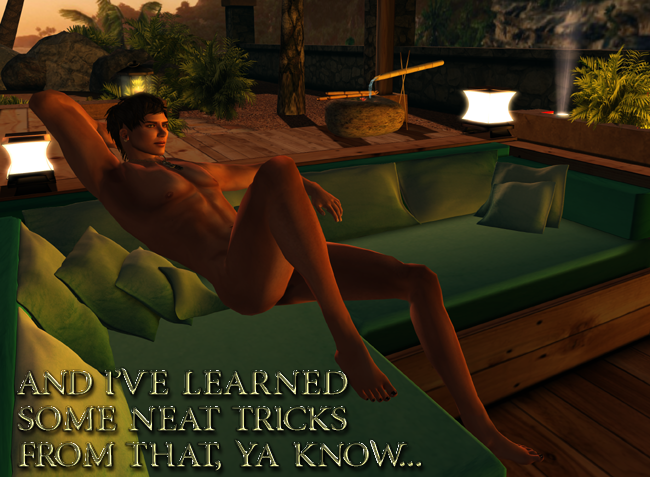 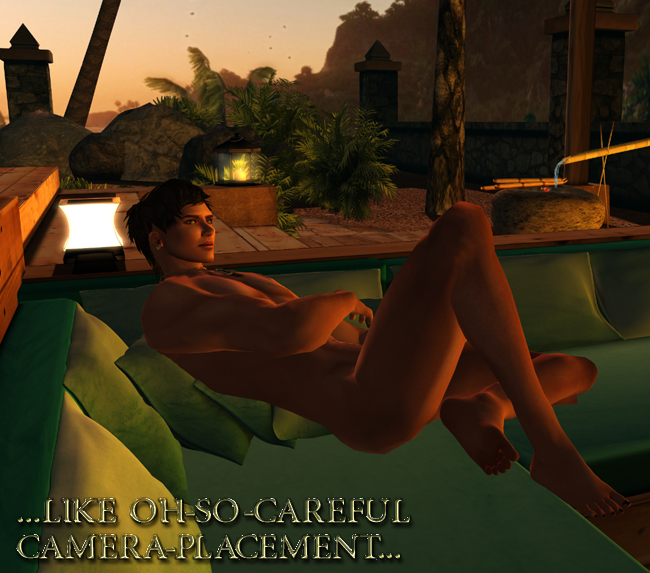 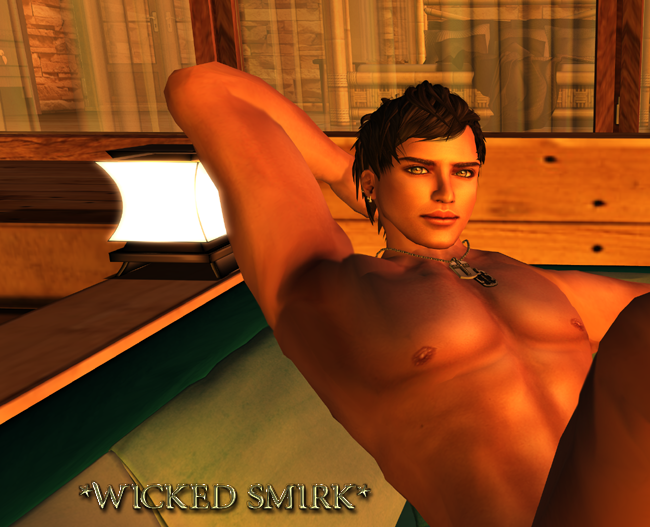 AAAAANYway. There’s one thing we both have in common… 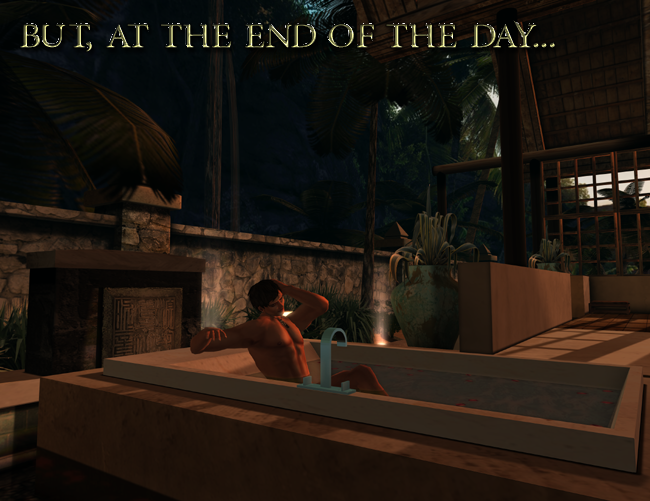 As I was saying…

…after a long day’s slog (him at that Work thing, and me doing his fashion crap) we both gotta just… faceplant. 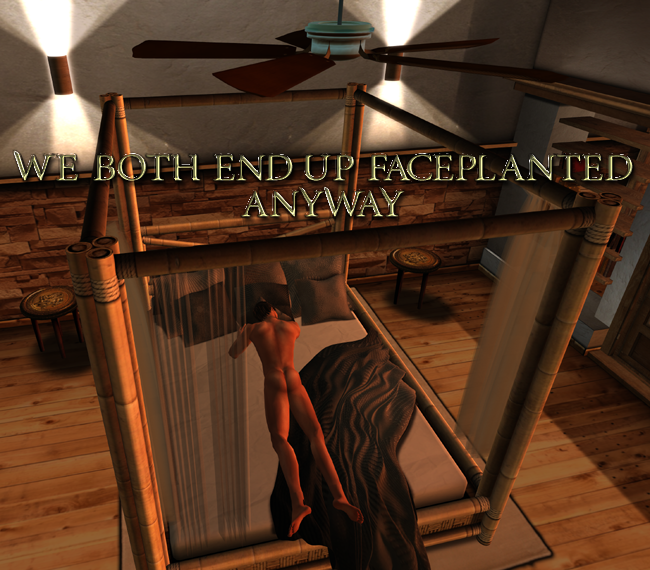 And then Daros’s pilot logs off and the fun really begins. And no, you ain’t seeing pics of THAT! O.o

Brief credits (hey, I ain’t him; you’re lucky I’m giving you these!)

Neck thing (never said I was a wordsmith, okay?): Aitui

SUDDENLY (!!) A HAND RISES FROM BENEATH THE RUG!

Ack! *legs it back into the tarty stuff and poses prettily as the pilot emerges, spitting tack— er, staples*

Pilot eyeballs avatar, then mutters something about blogging the friend thing tomorrow.

9 thoughts on “The Secret Diary of Skell Dagger, Aged Seven and a Quarter”