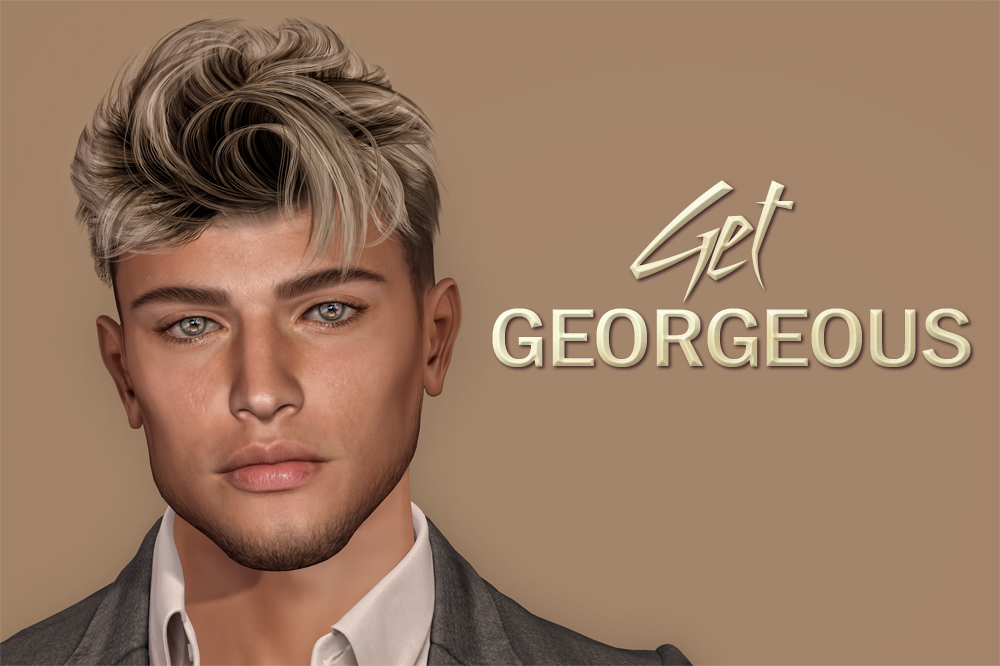 The long-awaited first male HDPRO head release from Catwa has finally landed, my sartorial darlings. And oh boy, does he live up to my punlicious title: the absolutely gorgeous George! 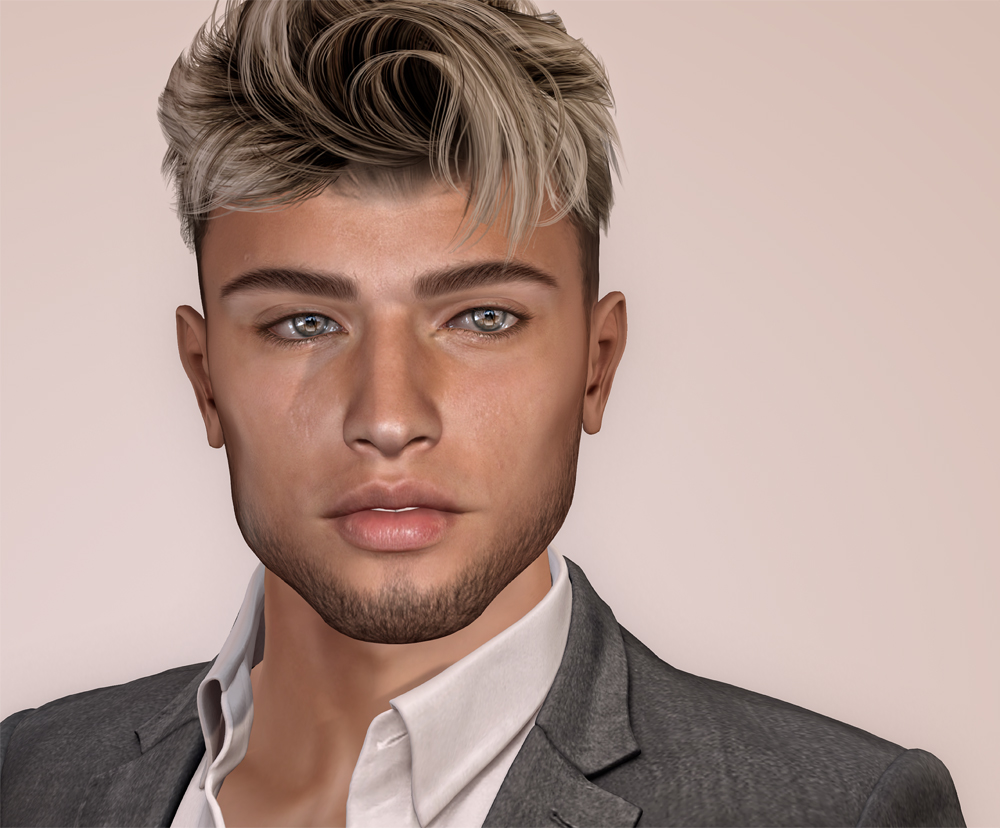 HDPRO is a range of advanced Bento mesh heads, featuring new smoother rigging, high definition textures and materials, and an improved UV mapping that’s now as close as possible to the default Second Life UV. It is also the first Catwa head series to feature the new Universal Neck that you will begin to see more of around the grid. Universal Neck is a collaboration between mesh head and body creators to all use a common neck, ensuring that you will not have to worry about neck seams and neck fixes in future. 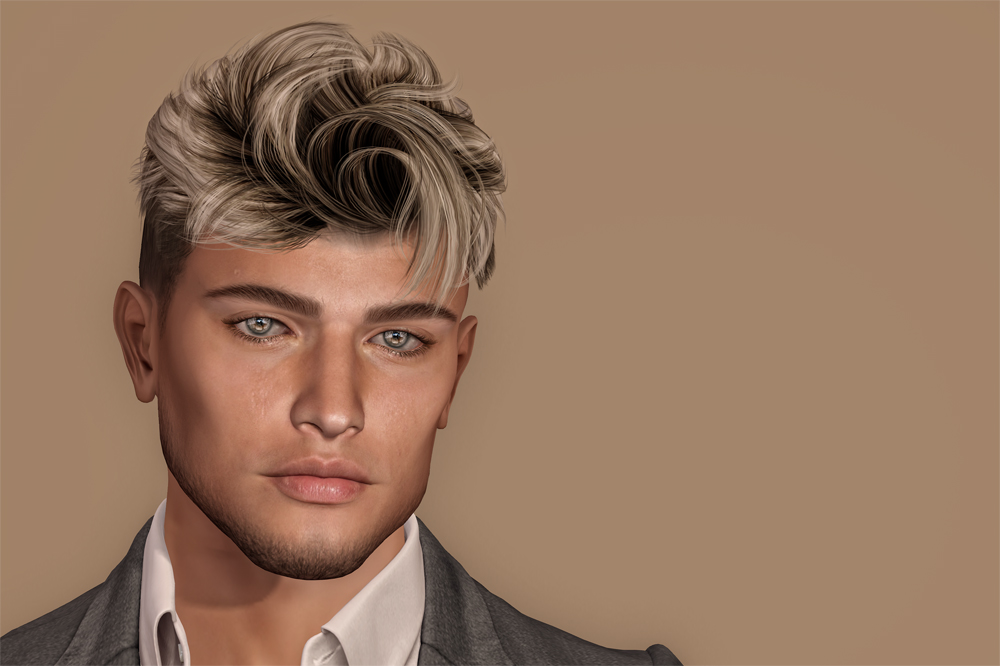 The heads are BoM-focused, but hybridised so you can still use appliers if you want to. It’s very likely that any skins released in future for HDPRO heads will be BoM and not appliers, so if you’re not on board or comfortable with BoM but you fancy taking George for a spin, you might want to read my Bakes on Mesh ‘for Dummies’ guide that explains the absolute basics of it, as well as my Activating BoM on your Mesh Head & Body post.

As the name suggests, HDPRO features HD (high definition) areas for the eye mask area, the lips area, and the ear mask area. The head ships with a big pack of BoM layers containing multiple options for brows, hairbases, facial hair, face tattoos, makeup, and lots more, including all the alpha layers that you might need if you want to go part-BoM-part-applier. Included head skins (shown in this post) are by LV Design. 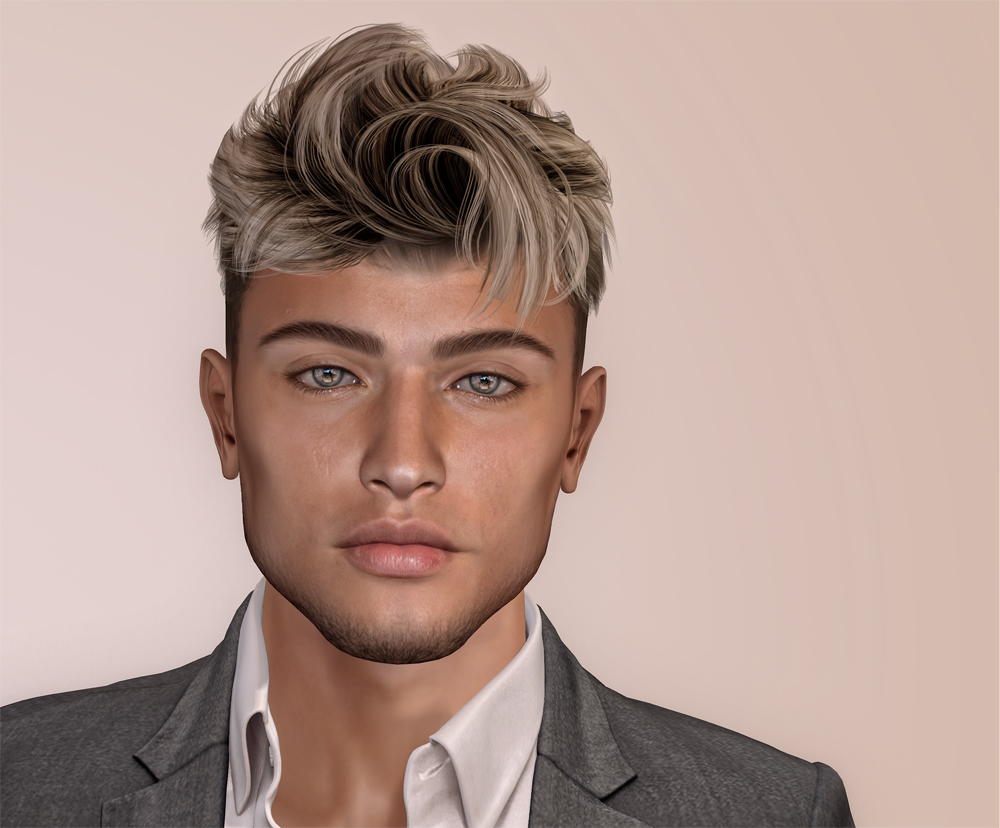 In the three shots above I’m wearing the Beard ‘B’ which is a light chinstrap that I asked Catwa to make and include (the benefits of being a CSR!) as I’d not managed to find a single one that I liked without other facial hair attached to it, and it’s already a firm favourite of mine with this look. You also have other facial hair options (all of which—thanks to BoM—can be layered with each other) from five o’clock shadow, to a neat ‘tache, to goatees to full beards. Fret not; I plan to spam you to hell and back with at least one more facial hair option, coming right up ;-) 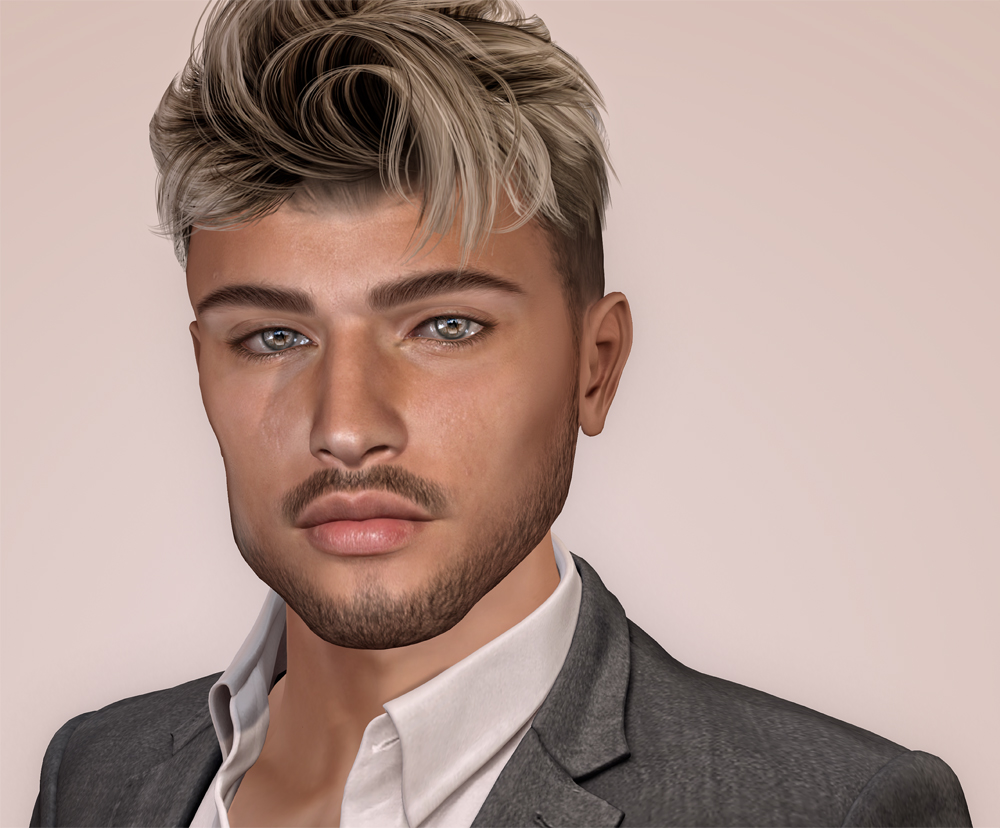 The brows in this image are the HD brows that are included on the HDPRO Style HUD. Also included (but not shown here) are two sets of smudgy black guyliner and one thick smudged tintable eyeshadow that goes all around the eyes (so you can getcha goth on if you want to).

As mentioned at the start of the post, I’ll have a full setup tutorial going live on the blog (it’s all ready and waiting in my drafts queue right now) for Thursday 11th March, when early access to Skin Fair opens. That post will mainly be a copy of the existing HDPRO guide that I wrote when the first two female heads were released, but I’ve ‘bloked’ it up for a male audience. The videos show the male head, especially so since the eye mask options are different than the ones on the female heads, but also because… well, I’m well aware that some guys might shy away from a tutorial showing nothing but a female head. (Yeah, I saw those of you out there who bitched about the original ‘closed HUD’ icon for Catwa’s Bento heads being a salmon pink powder compact…) 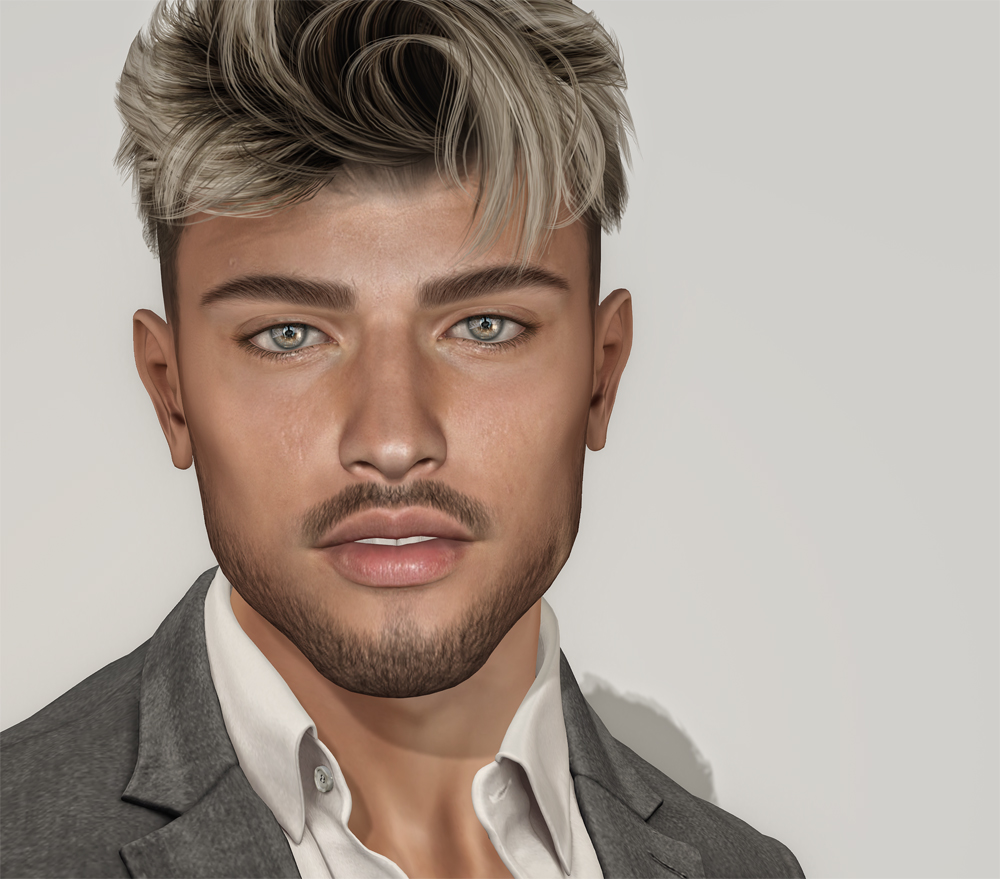 (Yep, these images were taken across a couple of days and in different Windlight settings. Deal with it!)

I’ve had several people telling me how striking the eyes on this head looks. That’s down not only to the beautiful IKON BoM eyes that I’m wearing, but also to the fantastic materials options the HDPRO heads offer. You’ll see more about that in the tutorial post. 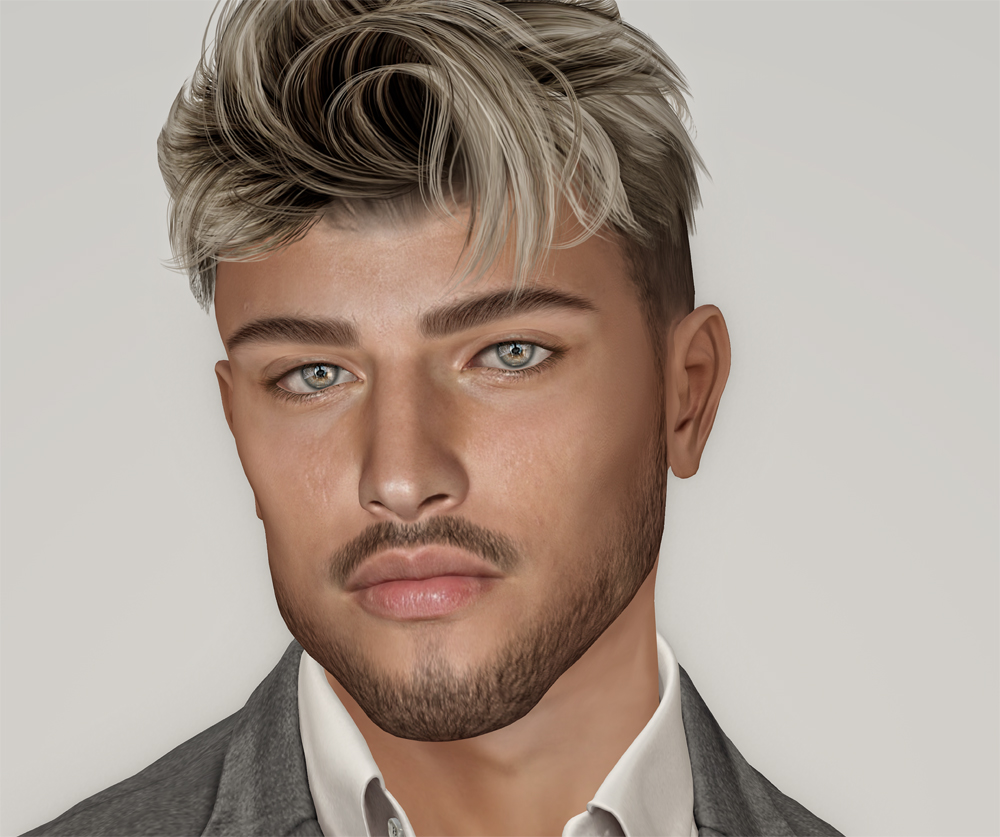 As mentioned earlier, the UV map on the HDPRO heads has changed. It now maps much more closely to the SL UV than the original Catwa UV did. This means that your older Catwa BoM (and applier) skins and makeup may not look quite the same on the HDPRO heads. Just a little advance warning of that. However, the UV map has something very special about it, because…

Yep, the male and female heads share the same UV map. That means you can wear female HDPRO skins on the male HDPRO heads (and vice versa). Below is an example image that Catwa has uploaded to her Flickr, to give you an idea of what to expect: 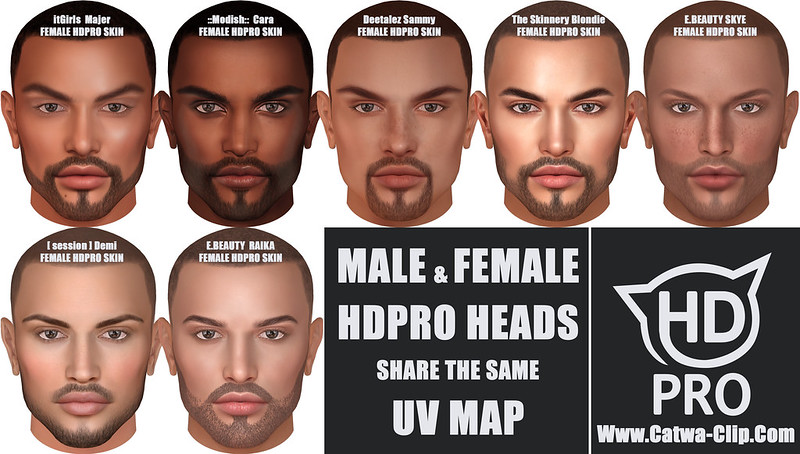 Not only skins, but also makeup, brows, freckles, scars (BTW, there’s a free gift scar for HDPRO available in the gift room at the Catwa mainstore), hairbases; you name it. If it’s on the HDPRO UV map, it will fit the same on both heads. For those of us who like to straddle the gender line—the androgynes, the bishōnen, and the boys who just like to wear makeup—this is absolutely amazing news.

Just a small update here: Already I’m seeing some smartarses flashing their prejudice around in comments elsewhere, about ‘bearded ladies’, ‘Conchita Wurst’, and ‘ladyboys’. Seriously, people? Take that nasty attitude and tuck it away somewhere dark.

Aaaand update #2 for those who are saying “But I don’t want to use female skins!”

*sigh* The possibility of using female head skins is an option, not a requirement, for those that want to. These skins are being shown here as examples of what is possible for those who want to have that option. Those of you who don’t want that option… don’t have to use it. Just use male skins instead.

There are already at least two new masculine skins being created that we know of, and those will be available at Skin Fair, at the same time the head is released.

Caveat here: George is only unisex in its UV. The neck fit is a male one, and will not work with female bodies (sorry to those—myself sometimes included!—who use combinations such as Maitreya Lara with either the V-Tech or Maitreya flat chest add-on).

That said, of course, it’s unlikely that creators of female HDPRO head skins will make male body skins that match to them, so you’ll need some BoM neck blends. Izzie Button of Izzie’s has one set already available here on Marketplace, and she has more in the works. 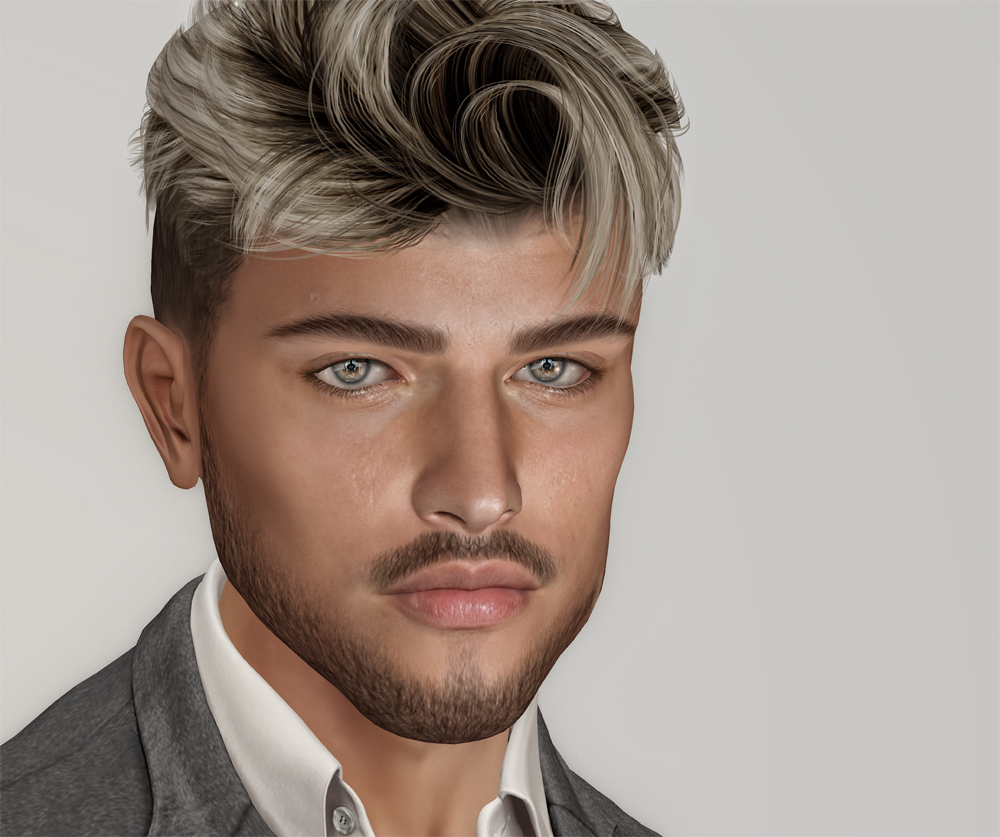 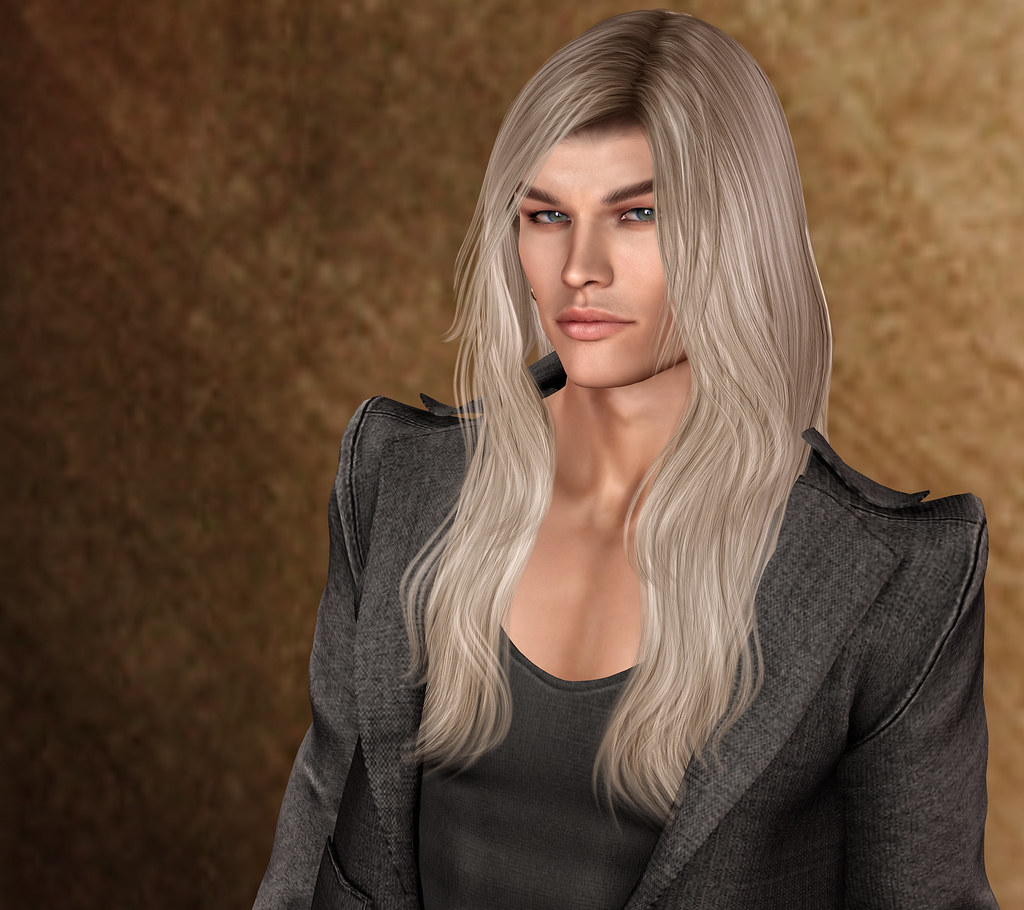 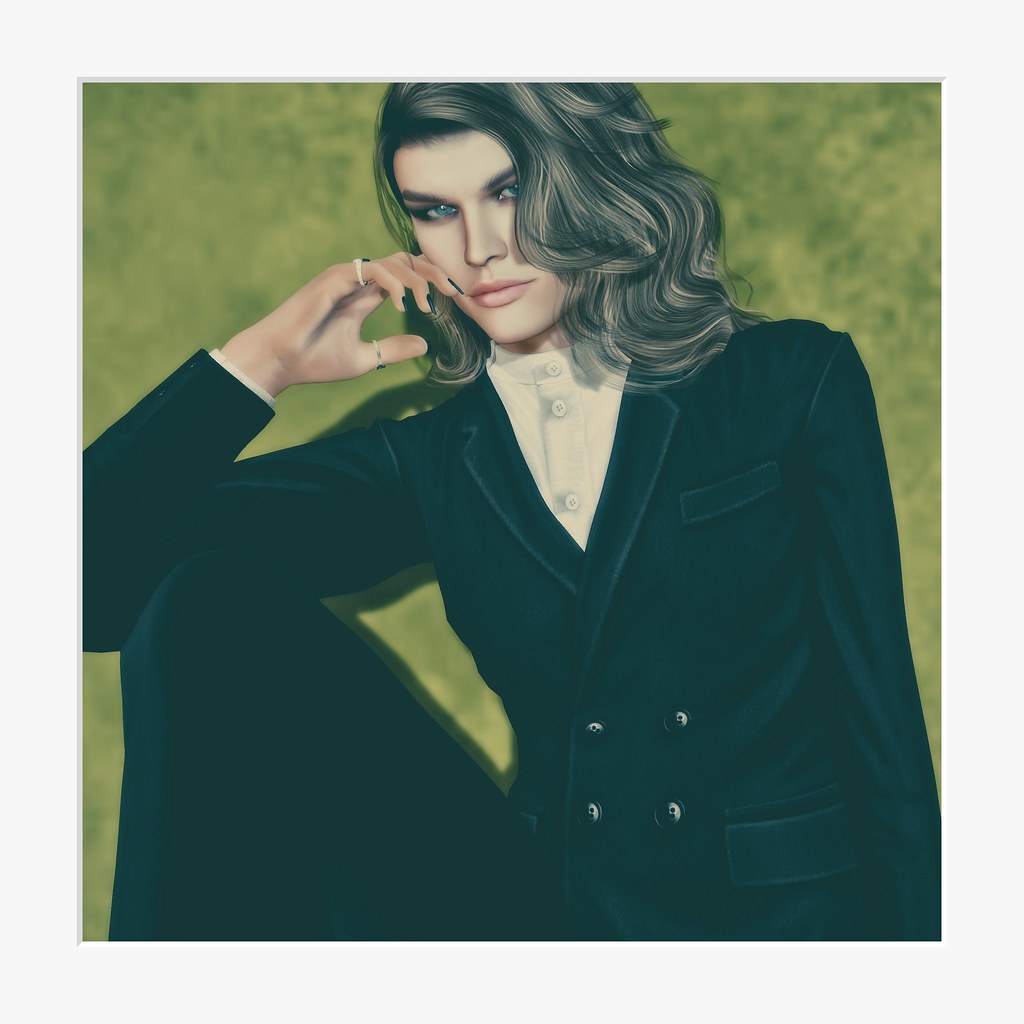 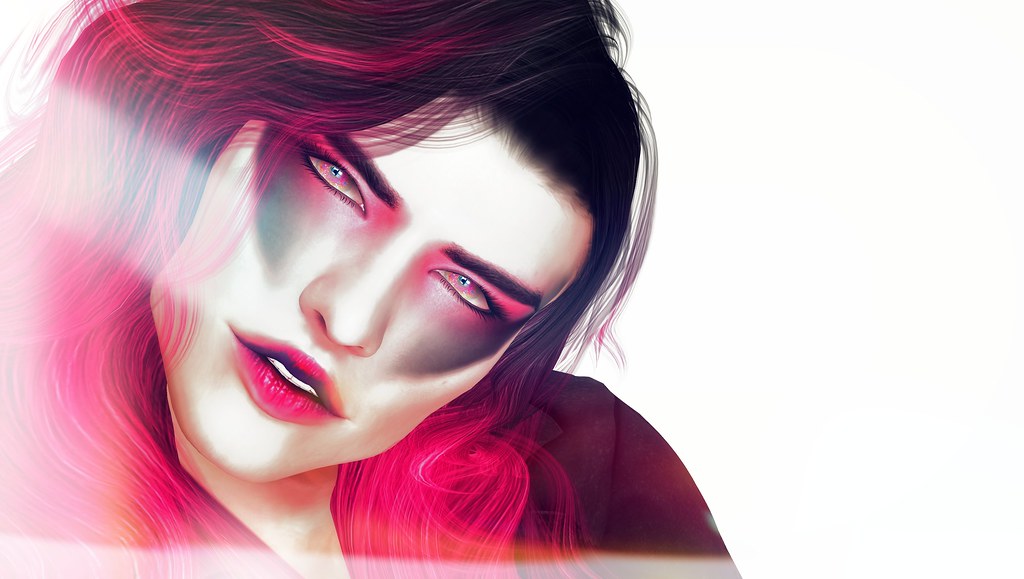 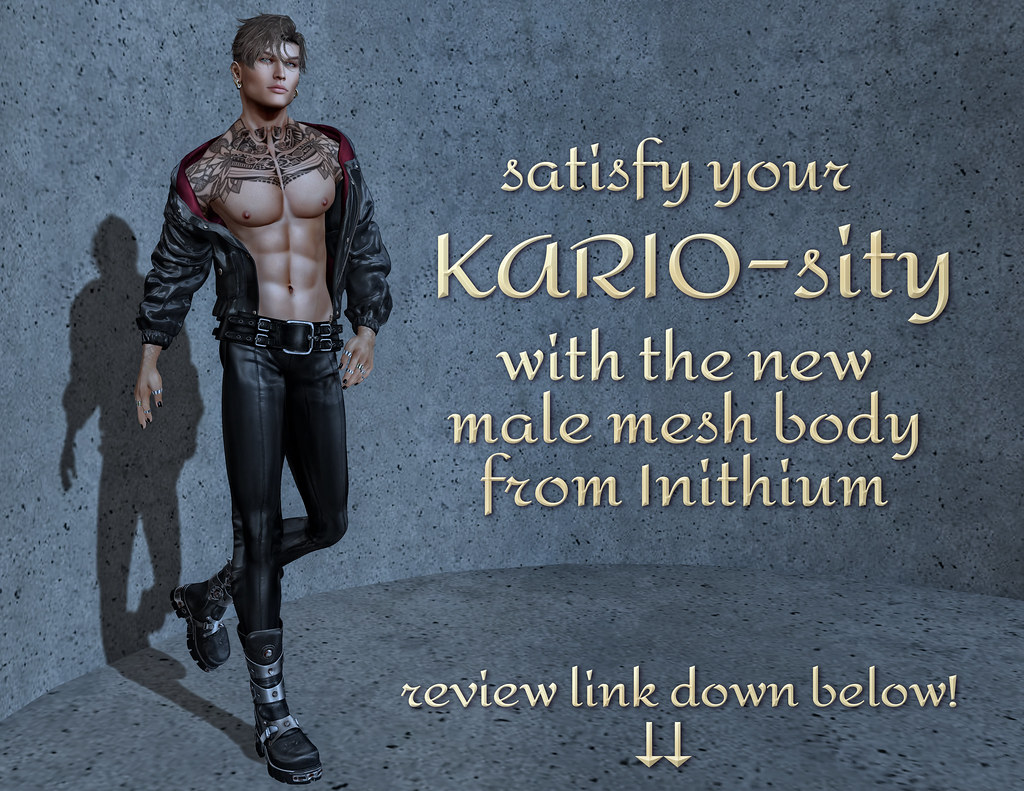 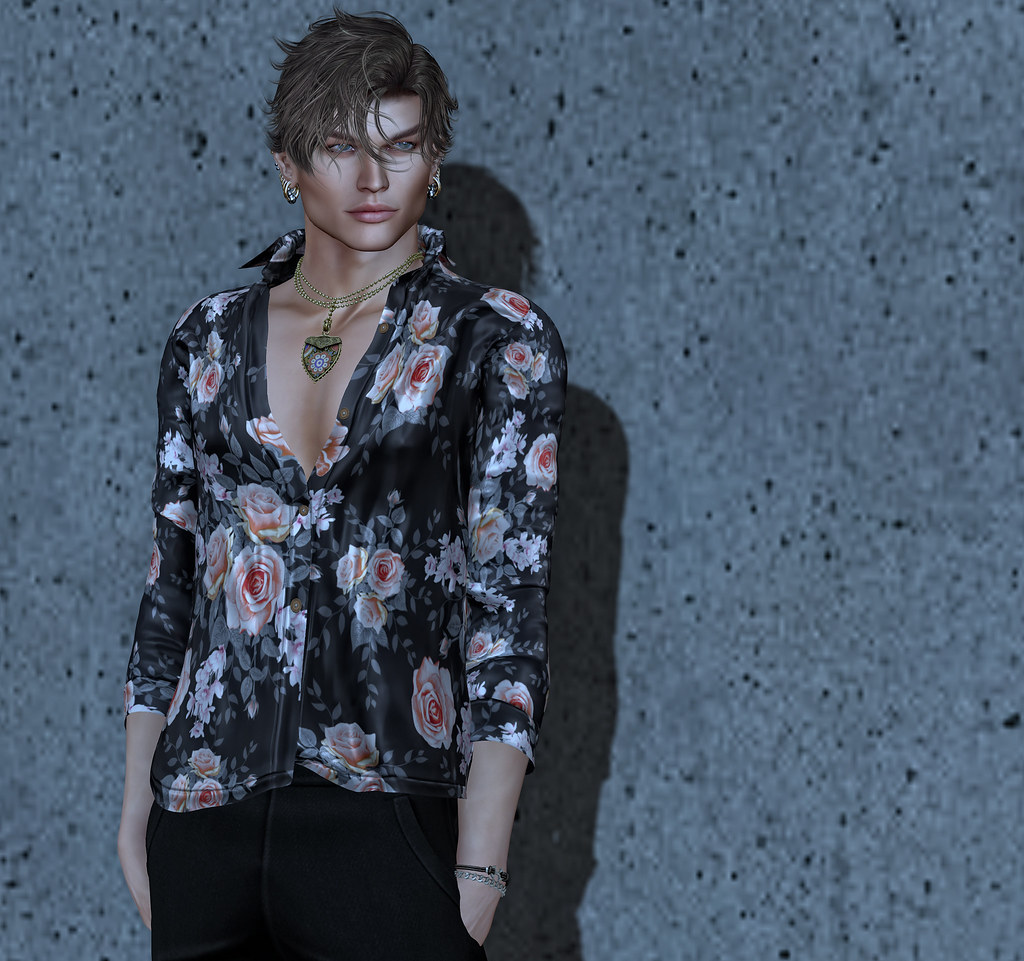 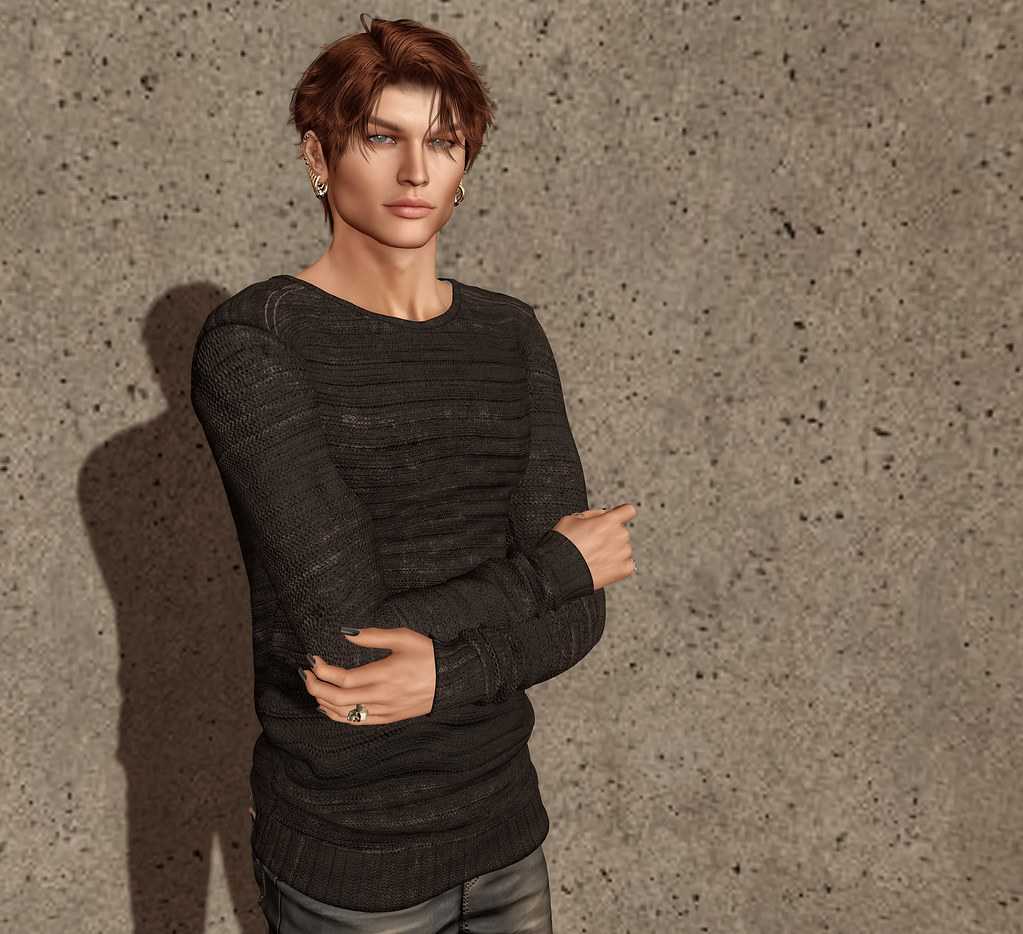 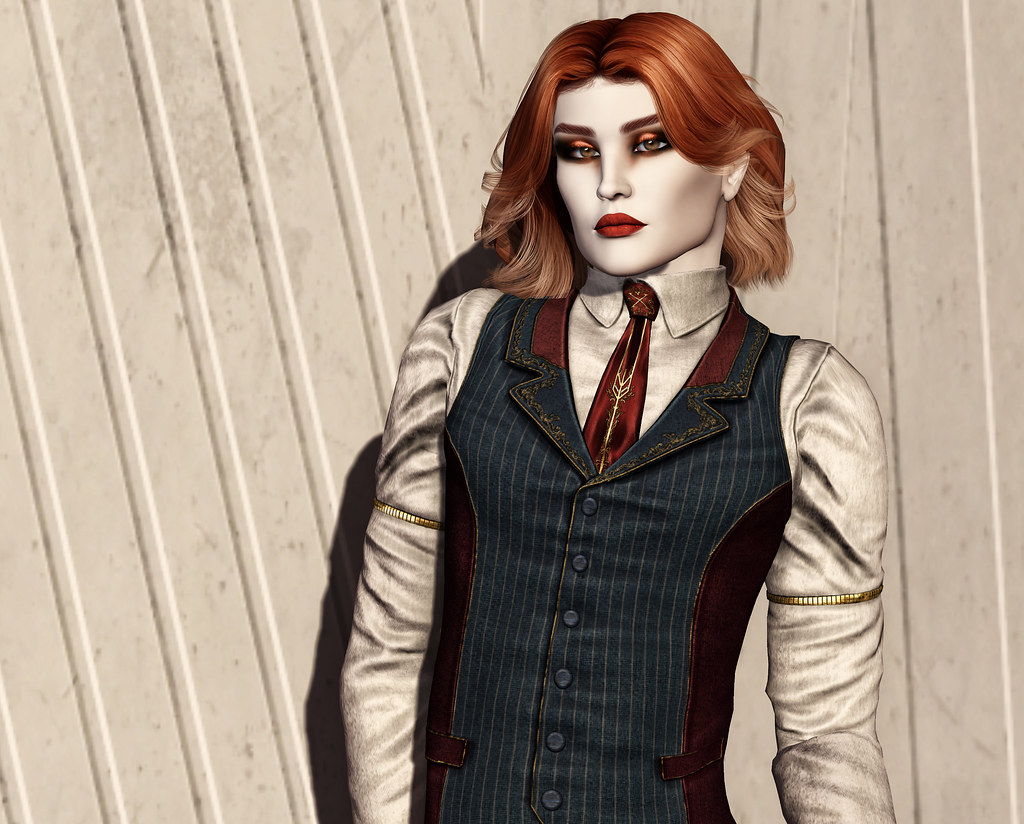