Noob Dude - A Style 101 for the Male Avatar Tutorials 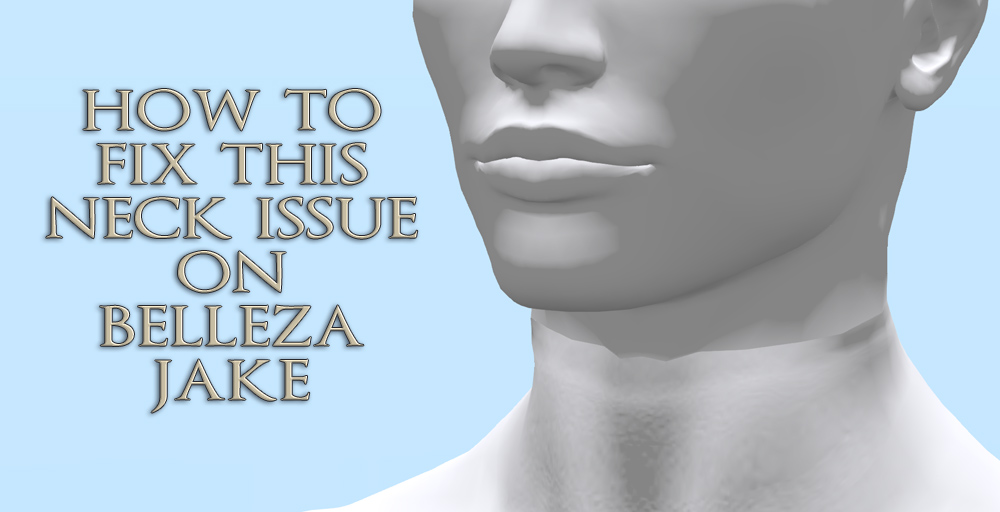 UPDATE: As of today (Sunday 29th August 2021) Belleza have just updated all of their bodies, including Jake. The below neck issue has now been fixed. If you are still experiencing this issue, visit the Belleza store and redeliver your purchase to the v3.0 version.

Since Lelutka gave away their Alain male mesh head as a free gift before Christmas, I’ve seen a considerable uptick in guys asking how to fix a very specific issue. It’s not an issue with their Lelutka head; it’s an issue with their body. Their Jake body by Belleza, to be exact.

Here’s a small composite of some examples (plus one using my own avatar) that I’ve seen lately: 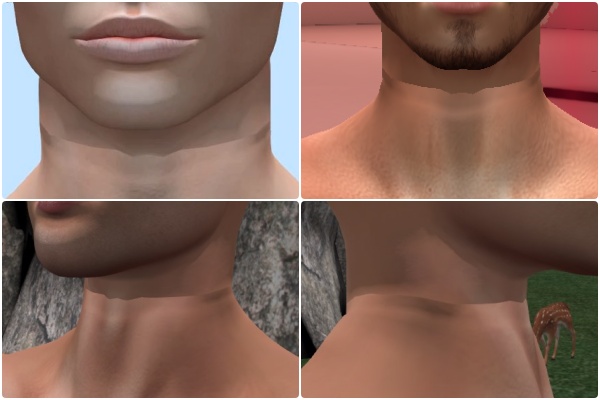 As you can see, it’s a very distinctive issue, comprising the following:

In those images, you’re seeing different head brands as well as different skins. It doesn’t matter which head you’re using, which skin you’re using, or even whether you’re using appliers or BoM (Bakes on Mesh). Issues 1 and 2 are easily fixed, and I’m going to explain in this post how you can do that. Issue 3… is not so easy, I’m afraid. We’ll get to that at the end of the post.

Issues 1 and 2 are caused by your graphics settings. If you’re using the Belleza Jake body and you’re seeing your head looking much darker than your body, as well as that pale ‘stripe’ just below the neck join, then you have a very specific setting disabled in your viewer. Here’s how to fix it: 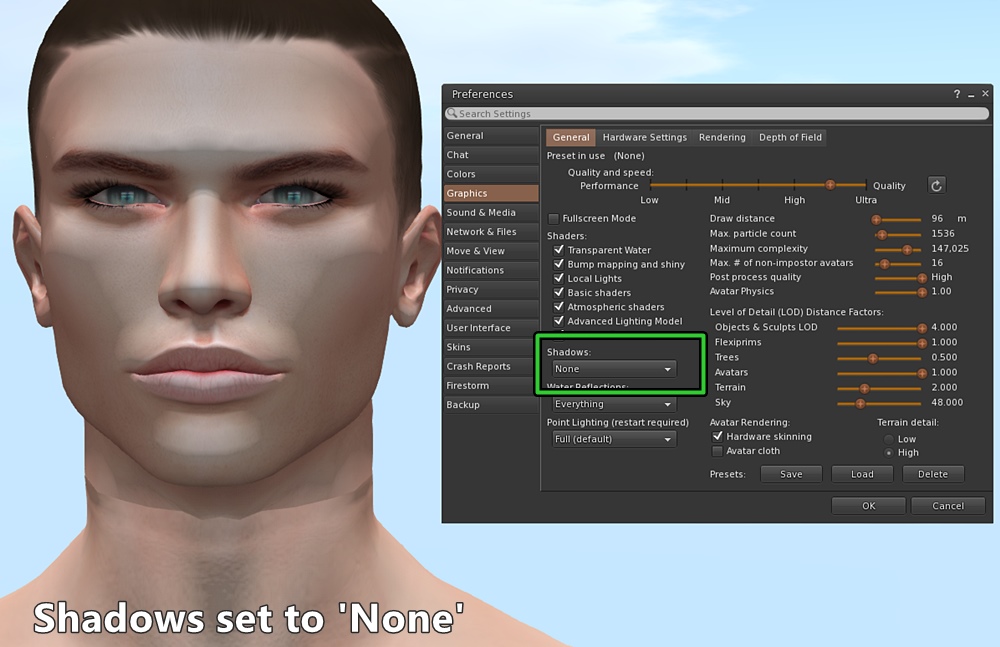 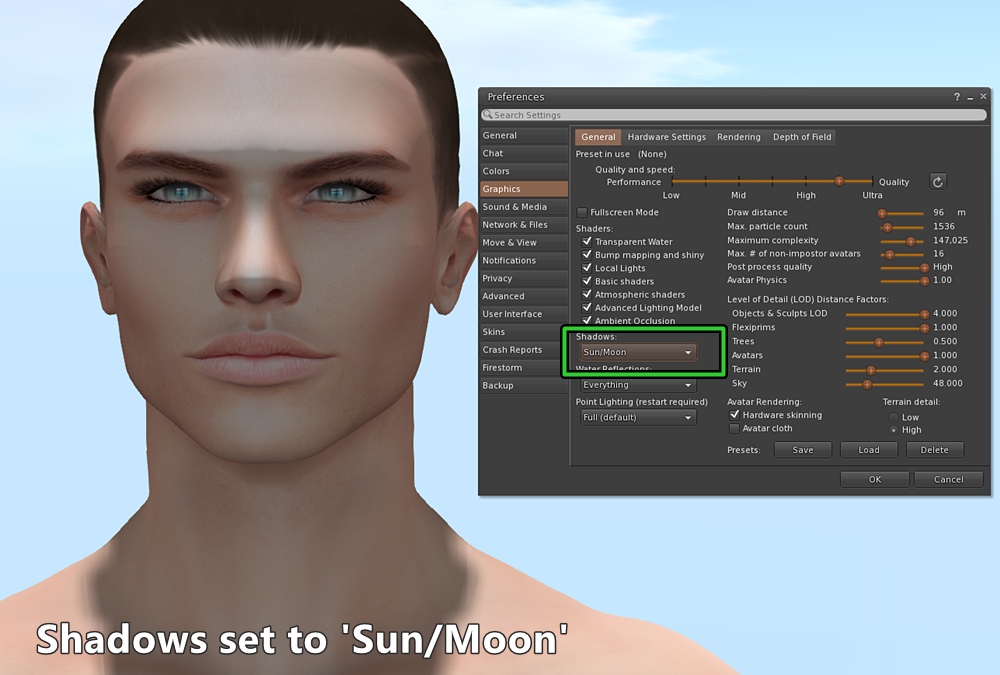 Below is a video using the Firestorm viewer, showing the fix in action. Click here to view it in full size.

What’s happening there? Well, you have the viewer’s Advanced Lighting Model enabled, but have probably manually disabled the shadows setting, possibly because you might think your computer will struggle with the shadow rendering. Unfortunately—and I have no idea why—that will cause those first two specific issues on the Belleza Jake body, and only on that body. Even enabling the basic ‘sun and moon’ shadows will fix it. And don’t worry if your computer isn’t very powerful; you can enable that setting even if your main graphics quality slider is as low as Medium.

You will note that your face might be in shadow after you’ve done this. That will happen if you’re using the default day/night Windlight or EEP lighting settings. Depending on which viewer (and viewer version) you’re using, you can change your Windlight/EEP settings to something brighter and clearer. Try any of the following:

Now we come to issue number 3, and…

Guys, this is where I’ve got to level with you. If you’ve ever tried to search my blog for a review of Belleza Jake you’ll have noticed that I haven’t written one. There are several reasons for that, but the neck issue is the main one. Belleza Jake currently has fitting issues against several major brands of mesh head, and given that it hasn’t been updated in a long long time (just over two years at the time of writing this post) I wouldn’t hold your breath for any fix to the neck fit issue. The fix given in the video above will mitigate the worst of it, but there is still a lingering seam.

To illustrate the issue, I created a plain white BoM skin and wore it, while using the [NB] Alpine Skinlight RGB Windlight setting, which is one that minimises neck seams. The results shown below are against: Catwa, Lelutka Origins (older line: Andrea & Guy), and Lelutka Evolution (newer line, e.g. Skyler, Alain, etc). 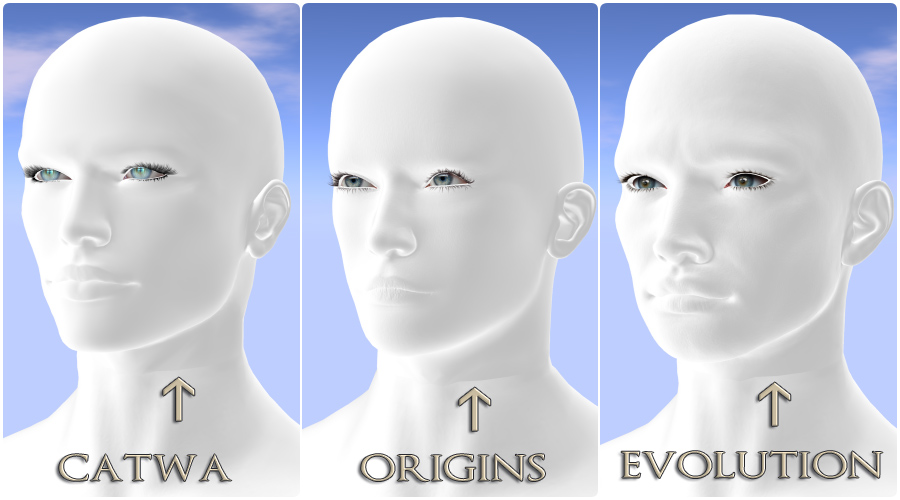 The problem is especially pronounced against heads that make use of the new Universal Neck. Several major head and body creators have agreed to move to a new standard neck fitting (the Universal Neck) so that—going forward—visible neck seams would be a thing of the past. Legacy is one of the male bodies that has the new neck, and Signature has also updated (their folders include two bodies with different neck options: one for the new Universal Neck, and one for the SL neck that fits older heads). But Belleza—being as slow to update as it is—is not a perfect fit for the Universal Neck.

Currently, Lelutka Evolution heads use the Universal Neck, and Catwa’s upcoming male HDPRO heads will also use it. (And those are only the ones that I know definitely have/will have it; there may be other head brands that have also made the switch to Universal Neck.)  And since Lelutka gave away Alain—a free mesh head from their Evolution range—just before Christmas, that would explain the uptick in questions I’ve seen about neck fit issues.

In all honesty, the best that you can currently do—until Belleza eventually updates—is to use the best Windlight that you can. And while I’m not an advocate of using the neck fixes that are included in some head and body HUDs (since they normally should not be needed), in this case I could understand why you may want to use one. You can find the Neck Sheath on the Shape tab of the Jake body HUD. 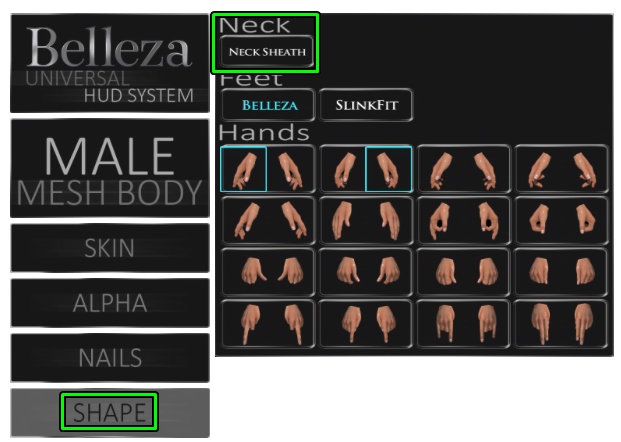 Q. The Evolution package uses 4 head options, but after updating to 2.5, I only see 2. Why?

A. We included 4 heads before our new update to give body designers a chance to update to the new normal. Now that the majority of the body brands have updated, we are only including 2. Your package includes a static ear and a non-static ear version. These will fit seamlessly with most bodies (Maitreya, Legacy, Signature, Slink to name a few). However, if you wear any other bodies, for example, Belleza, you will need to adjust the neck size to 0 on their HUD as they have not yet updated.

However, that ‘adjust neck size to 0 on the Belleza HUD’ option is only available on the female Belleza bodies. Jake doesn’t have that. It only has that Neck Sheath option.

I truly do hope that we see an update to the Belleza Jake body that fixes not only the ‘shadows = none’ issue mentioned here, but also adds an option for the Universal Neck, as well as fixing the splayed fingers issue (that the wearer often doesn’t see but others around them do), and also finally adding a BoM activation button to the body’s HUD rather than relying on a third party add-on HUD to enable BoM.

The creator’s profile does state the following:

2020 is, of course, already past, but it was a bit of a shitshow for everyone so it’s understandable why a project may have gone onto the backburner for a few additional months. But then… his profile also states the following:

Venus, Isis, and Freya are currently all on v5.2, and—according to the date on the Release Notes notecard—that update occurred in 2018. Jake is, of course, already released (sometime around March 2017) and received its last update in December 2018. The creator is still active on Flickr, so I can only hope that an update comes soon. I would love to write a review of Jake, but right now the issues that I have with it are so pronounced that I only ever use it in the rarest of circumstances: that is, when I desperately want to blog a clothing item but it’s only available in a rig for Jake.

I’ve tried to make this post as even-handed as I can. I know a lot of guys love the Jake body, and this post is not a drag on it. I’ve just had far too many guys asking me how to fix the neck issues it has, so I decided it was time to consolidate it all into a single blog post.

2 thoughts on “The trouble with Jake: Fixing this neck issue on Belleza’s Jake male mesh body”