Bleurgh. Too fucking hot. We’ve had a whole week of summer (unusual for Britain; summer normally happens on some random Tuesday) and I’m not built for it. Well, I’m built for it, but I’m not built to work  in it. If my job entailed wearing shorts and flipflops, then I wouldn’t be complaining, but it doesn’t. So I’m going to be distinctly British and have a whinge about the weather. 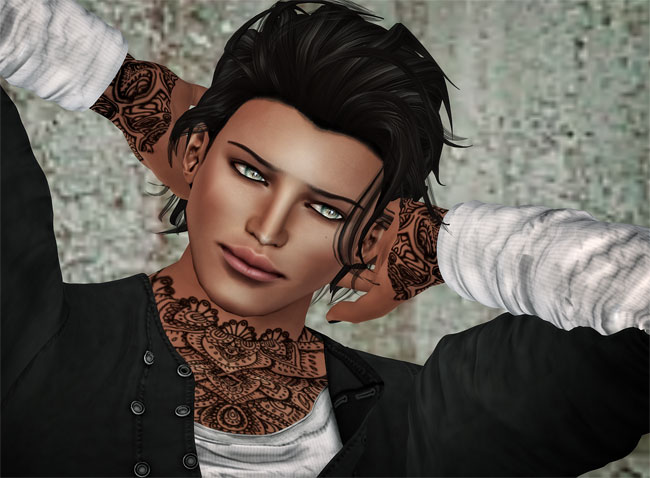 Given that it’s been uncomfortably hot in RL, I couldn’t bear seeing Skell in leathers from head to toe in SL. And while yesterday’s slightly kinky post entailed quite a bit of latex, there were quite a few airholes in said latex to help with, uh, circulation. *cough* For non-kinky wear, though, I needed to bust out the shorts.

It was at this point I came across another problem. I don’t tend to buy shorts, therefore I don’t have many shorts. Well shit.

And then I remembered a purchase I made a couple of weeks ago while browsing the new releases wall at Sn@tch. The Reese Boho outfit is a female one, with strappy little tops, but—crucially!—also with what I actually bought it for: torn denim shorts. They come in clothing and Omega applier layers, so once Skell had those on I think he was a lot happier (although he did insist that he wore a tanned skin, because he didn’t want to look like a pale, post-winter slug that’s just crawled out from under a stone). 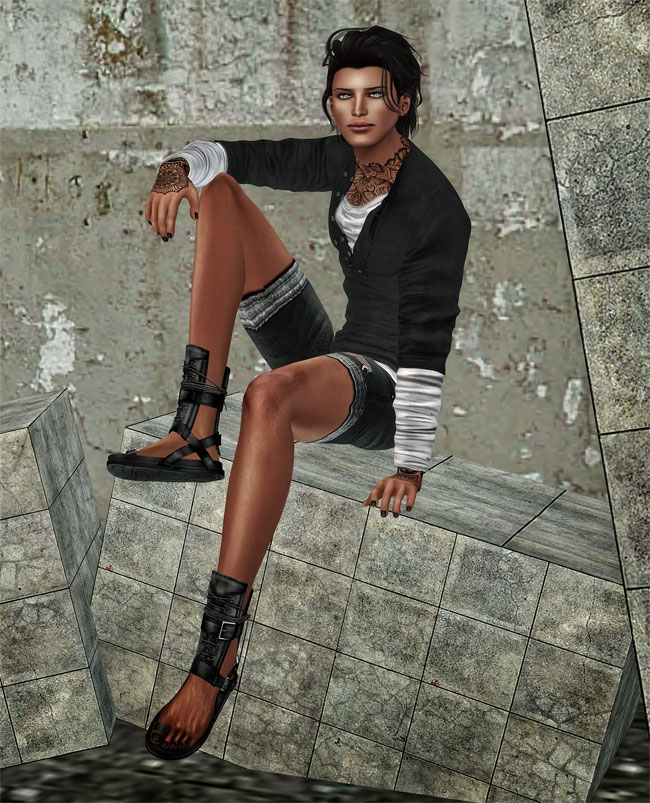 The sandals were a given, since these are some longtime favourites of mine by United Colors. I picked them up at TMD last year (they’re for Slink feet only) and while in RL you’d end up with some horrendous tan lines they look fucking amazing in SL.

The shirt is one from E-Clipse Design that I found at this year’s Menswear Fashion Week. And yeah yeah, it’s a double-layered, long-sleeved job, so it’s hardly suitable for hot weather, but I really liked the way it went with the shorts, and Skell was already happy that his legs were getting an airing, so go figure. I stuck with it. 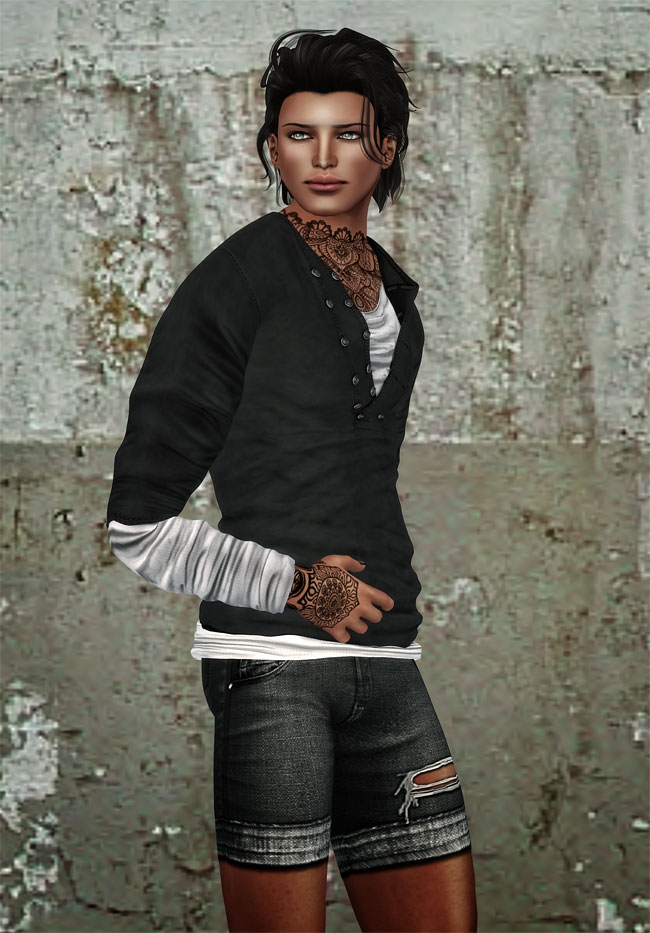 The hair is another new release from Exile for this year’s Hair Fair. It’s the only male style in the set, and it’s another of those scruffy, tousled ‘dos that I love. Perfect for that beach look, when the sticky salt spray blown by an offshore breeze has made your hair get a little out of control ;-)

The tattoos, although not perfectly visible here, are from White Widow at the current run of We <3 Roleplay. Available in both black and white, and in three strengths (Skell is wearing the darkest version in these pics) they come in both system and applier options. I still can’t get over how crisp and gorgeous tattoos look on the Slink male body, compared to the old stretched look on the system body. Although I will say that most faded tattoos still look better on the system body. For some reason, they seem to blend better and actually look older and faded. 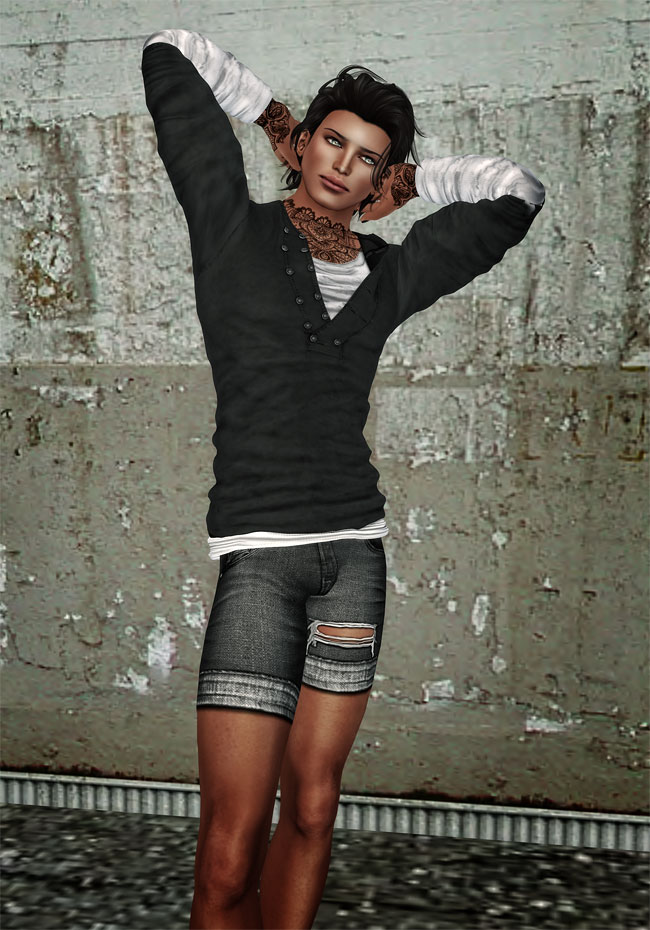 And here’s the full look. I feel cooler already, just looking at him ;-) 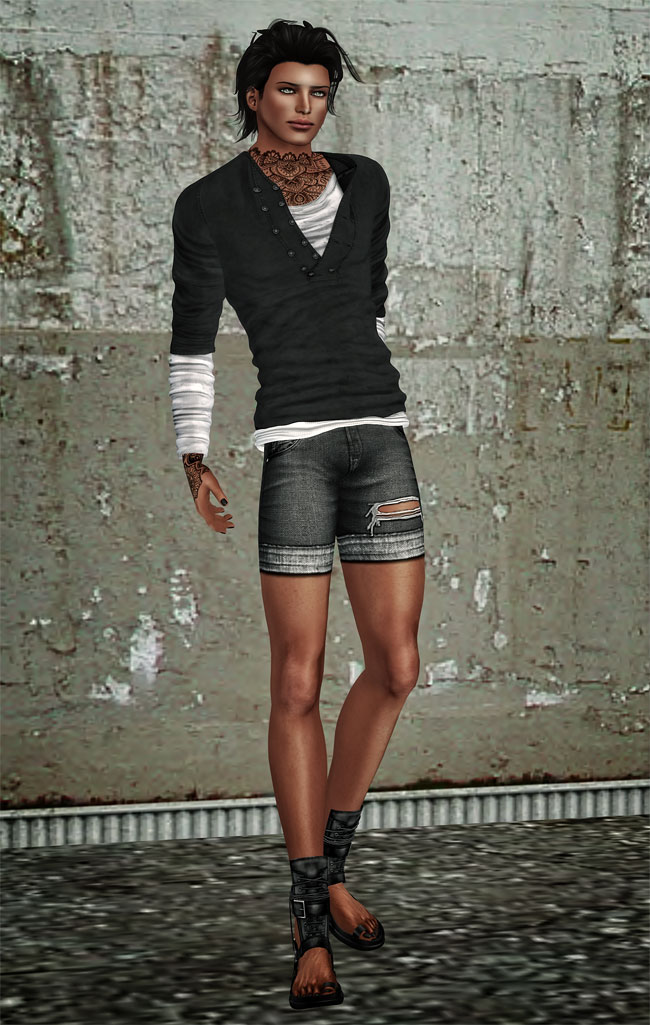