We passed upon the stair; we spoke of was and when.
Although I wasn’t there, he said I was his friend,
which came as some surprise. I spoke into his eyes:
“I thought you died alone, a long long time ago.” 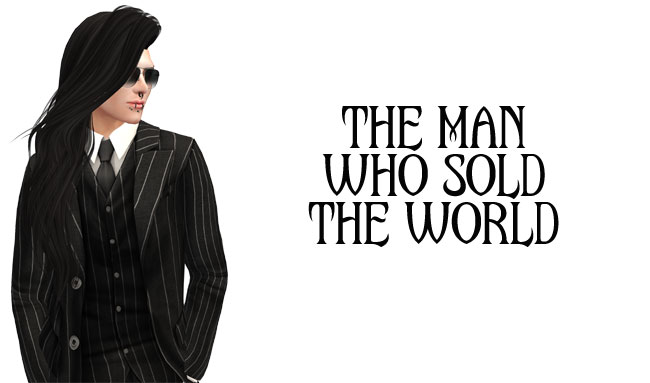 Nothing suits like a suit, and practically every guy—regardless of age, height, or weight—will look good in a well-tailored three-piece. After all, there’s a reason why my fashion tag for this blog is “Suited & Booted” ;-)

I picked up this stunner at Menswear Fashion Week (and, oh boy, do I have a few words to say about that event this year, but I’ll save those for another post). It’s by Gabriel, and I purchased two of the available options: this wide stripe and the more classic thin pinstripe. I was almost tempted into the thin check (second on the left in this photo from Gabriel’s Facebook page) but—no matter how dapper they look—there’s only so much occasion for wearing a suit in SL, and I’d already spent L$1360 on them.

You’ll get two versions with your purchase: a long-legged one, and one that is what I call a “pants that had an argument with your ankles” version. To be honest, with a suit this smart, I wouldn’t dream of wearing the shorter-legged version. The suit is one single item, and it’s fitted mesh, so there’s just one of each version (short/long). No fussing and fiddling with different standard sizing jackets, shirt/vest combos, and pants.

The main new release that I’ve flung (with casual carelessness, of course; can’t look too  well put-together *g*) is this rogueish long hairdo by Exile, which is out at Collabor88 right now. It’s a unisex style, and it’s fabulous to have in Kavar Cleanslate a designer who releases long hair in versions that work with both male and female avatar bases. No more long locks digging in between our shoulderblades, guys! (I suspect I should be sending a case of wine to one Mr Riel for that. *grins*) 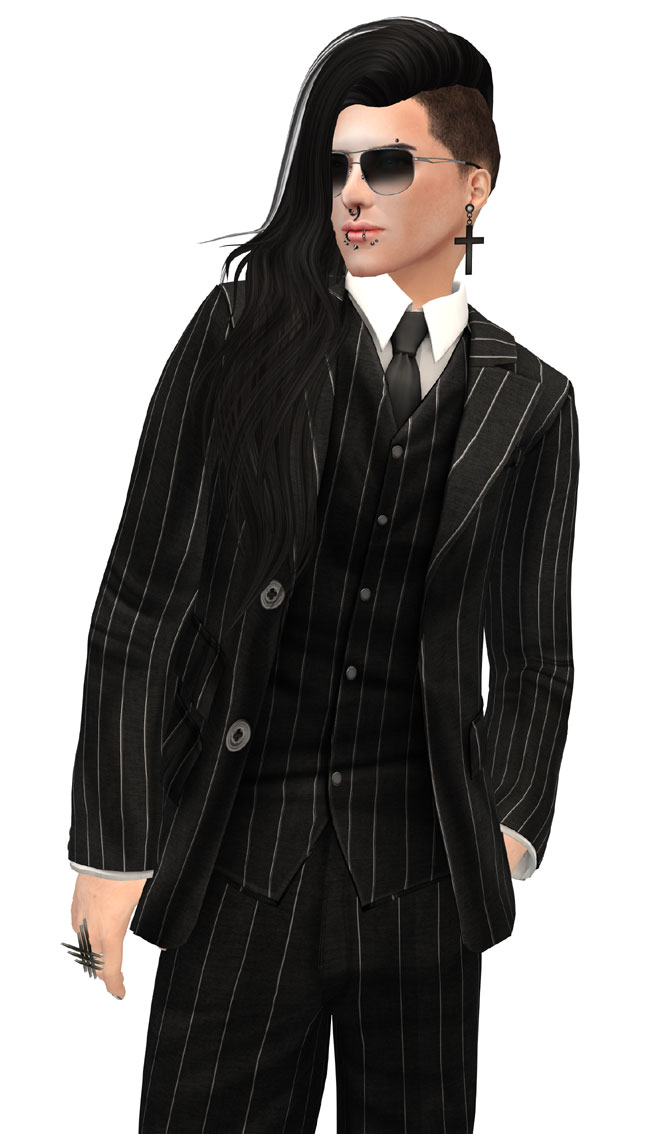 Accessories! I’m nowhere without something  adorning an ear or a finger. The earring is part of a recent release from Swallow, and the ring is something I picked up at a previous Menswear Fashion Week. And my trusty old piercings from Pekka (now renamed as Kibitz, in case you can’t find it in Search) make yet another appearance. This guy may be suited and booted (well, not quite booted, as you’ll see in a minute) but there’s a certain edge to him that sure as hell ain’t City Gent. 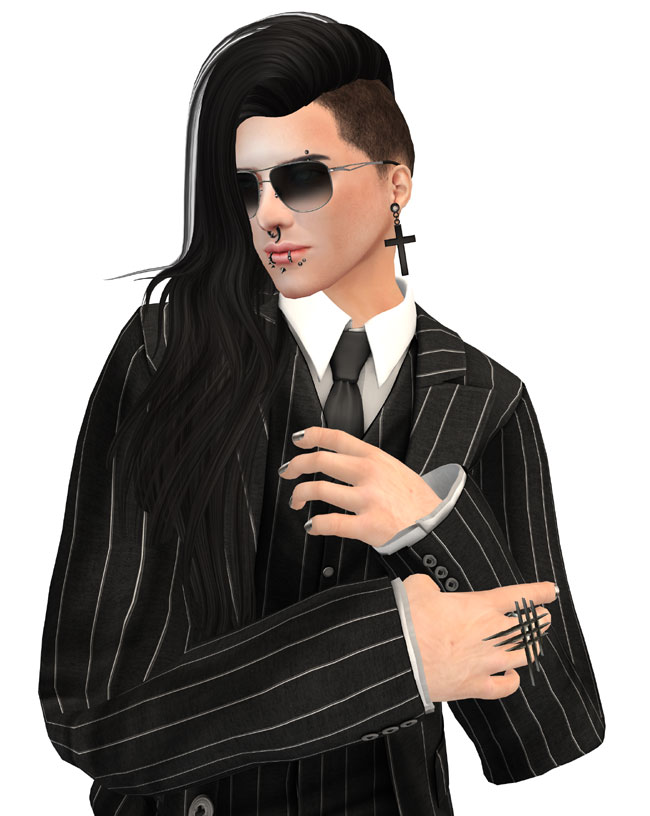 Just giving you another view of this hair, because it’s that  good. Honestly, built-in boob bump for the ladies, and  a flat-front version for us gents. I’d seal-clap and hop around the room if I wouldn’t get the stink-eye from Mr Dagger. *cough* 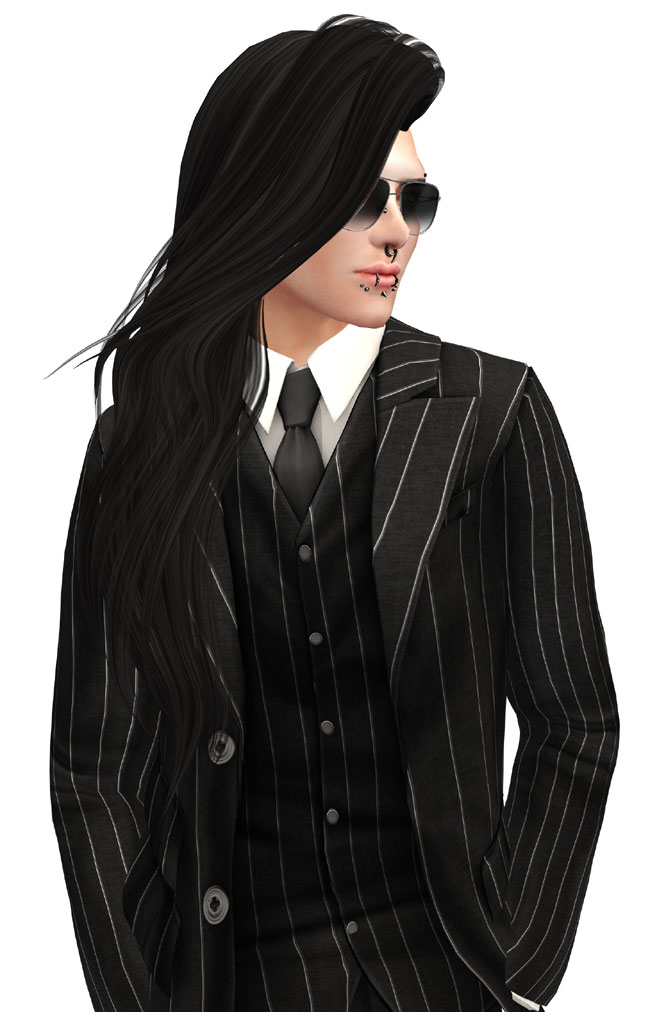 The shades are a new release by Redgrave at The Mens Dept this month. I’ve been buying Redgrave since… gah, since I was knee-high to a catwalk. I never went much for the skins (they didn’t suit Skell’s face shape) but oh my word, were they making great clothing and footwear, even back in the days of clothing layers and early sculpts. Their Mantess  glasses were one of my first mesh purchases, at Menswear Fashion Week 2013, and I still love the hell out of those things. 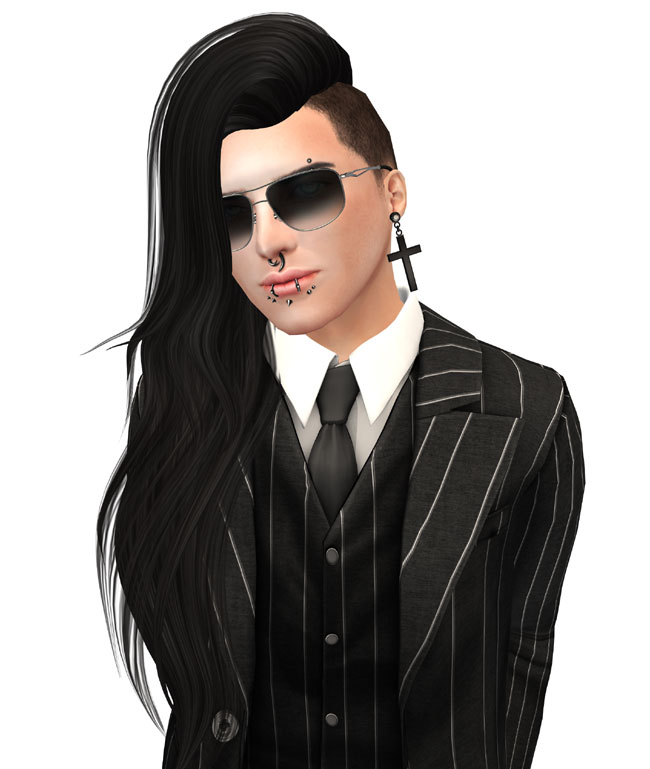 The skin—though it’s partially hidden by the shades—is by Clef de Peau, and currently out at The Mens Dept. I couldn’t wear the initial releases of CdP skins; something around the top upper lip never quite gelled with Skell’s face shape, but the more recent releases have changed that upper lip, and now they look great on him (ironically, just as Tableau Vivant’s skins—which I hardly ever took off at one point—changed to a new upper lip that just looks wrong on Skell. Oh well; swings and roundabouts, eh?

Be aware: The Clef de Peau skin is available in both standard (the default SL avatar) and  mesh (The Mesh Project avatar) versions. Pay close attention to the various sales ads on the Mens Dept display, to ensure you purchase the correct version for you. Also of note: this skin does not have eyebrows. Those need to be purchased separately, and you can choose from solid and cut versions. There is only one purchase board for the eyebrows, so that’s okay. Just be careful when buying the skin itself. Everything is clearly marked, so you shouldn’t have any problems; assuming you bother to read carefully ;-)

Shoes? Shoes! What is Skell in a suit without some freakish footwear? I just happened to wander into the David Heather store opposite The Mens Dept last month, and spotted these spiky beauties. Ka-ching! Purchased on the spot. They’re for Slink flat feet, so they won’t work for standard SL avatar feet. 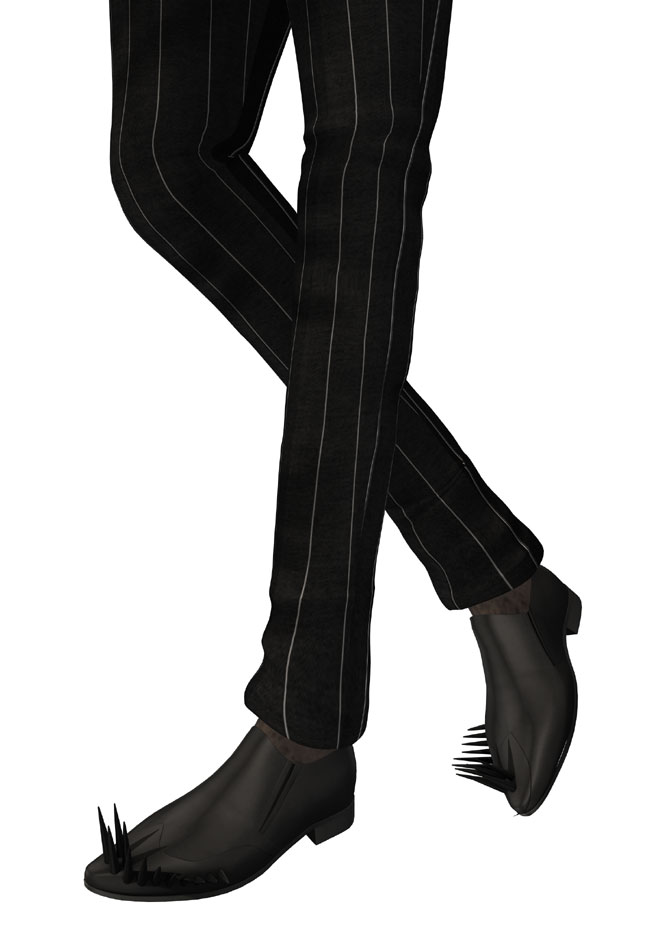 Lastly, yes I’m wearing Slink feet but I’m also wearing socks (because, in all honesty, that suit just looks wrong  with bare ankles). A note to any designers reading this: there is a SERIOUS dearth of applier socks out there (especially ones like these), so that’s a gap in the market you might want to fill. I found just one  store selling them for Slink feet, so thank you to Cannibelle for these.