Suited and Booted The SLife of I

I’m not scared of being different.
I’m scared of uniformity.
Celebrate the freaks. 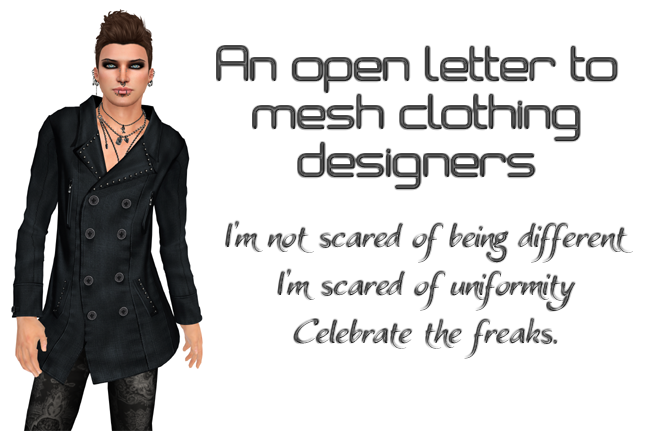 This is something that I’ve wanted to put out there for many months. So far, only my Flickr faithfuls have seen me talking about this, but now I have a wider platform and I intend to use it.

This is an open letter to mesh clothing designers. It’s a plea from the avatars who once happily played around with system and modifiable sculpt clothing intended for avatars of the opposite gender and who are being edged into uniformity by the limits of mesh. If you design mesh clothing (and, in some cases, mesh accessories such as jewellery) then please read on.

(Note: This post is image-heavy. Make a cup of tea while it loads…)

I speak from the viewpoint of a male avatar, half of whose inventory comprises female items, but this isn’t a problem confined to us blokes who straddle the gender line when it comes to clothing. Female avatars who like to wear menswear have the same issue. Vampires, too, apparently ;-)

Whenever I check out the galleries for unisex events these days, it’s almost half-hearted, because I know that in all probability the only thing I might be able to wear from the event is accessories such as jewellery or tattoos. Sure, there’s usually some kind of menswear there, too, but it’s often much of a muchness. It’s either what I call Mr Dropcrotch McNerdyGuy or it’s Mr Buttondown-n-chinos. The other prevalent options are plain old jeans and t-shirt, gangsta guy (one pants leg rolled up), and high formal. If those are your style, then great. Knock yourself out. But what about those of us who like to fly the freak flag sometimes when it comes to clothing?

This was a good deal from a well-known womenswear store. For a time, they offered this entire male avatar (shape, skin, several mesh clothing items) for just L$99 on Marketplace. It’s the kind of offer that will appeal to the typical male newb who doesn’t want to spend much but shudders at the thought of spending the rest of his SLife as Mr Boy Next Door. 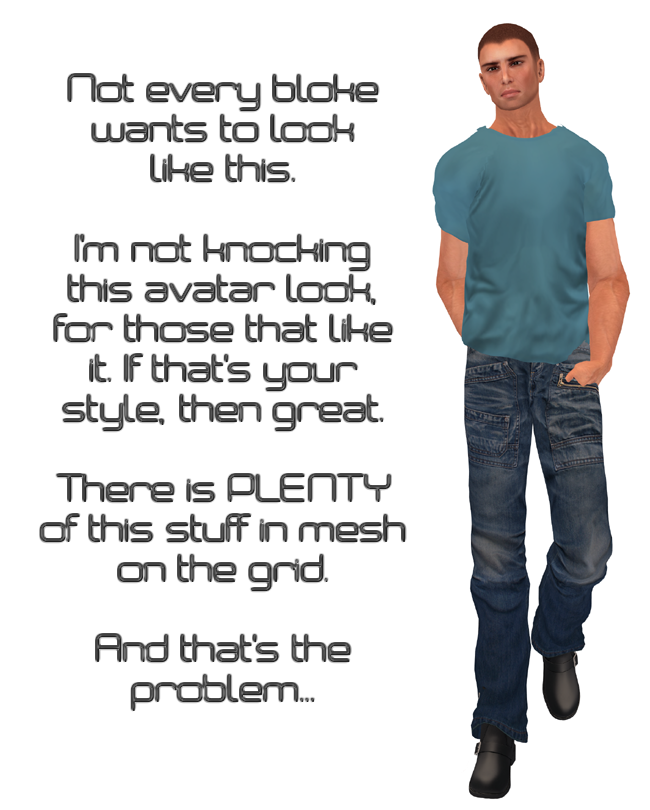 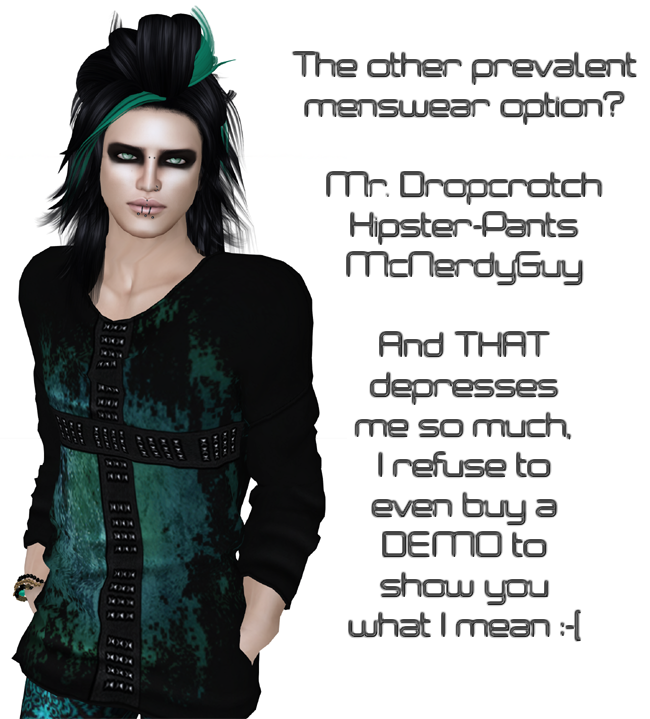 So, where does the problem lie? Is it with the makers of stuff like futurewear? 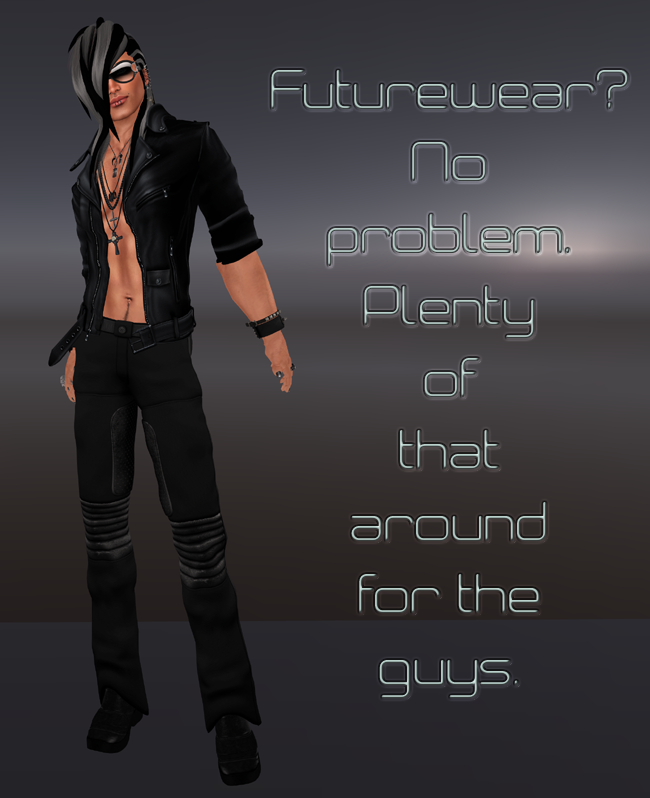 Nope. Plenty of stuff that’s already pretty far out-there and freakish. Futurewear by its very definition is different. In fact, if you’re into futurewear the more different you are, the better! 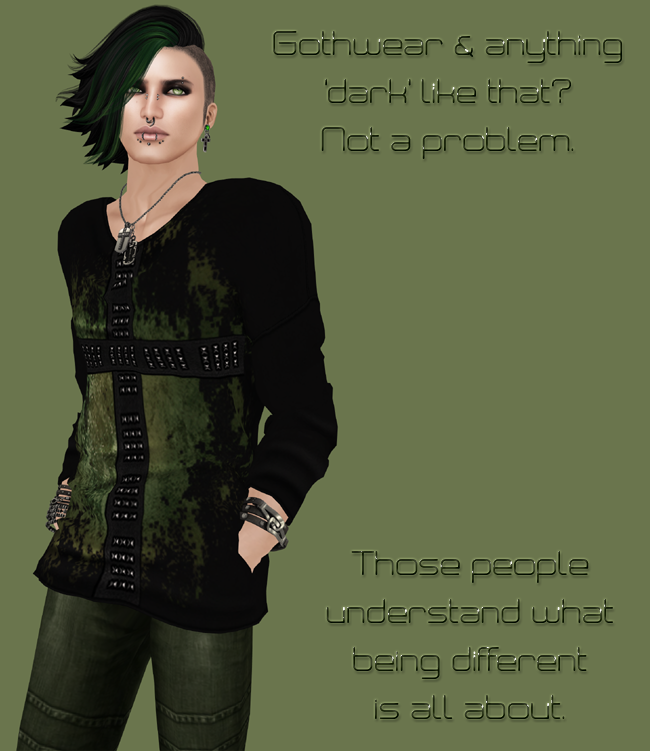 You have to be shitting me. No way. The goths and the makers of “all that darkity-dark stuff” understand perfectly what it is to be different. Those are the people that straddlers of the ‘gender clothing’ line (like me) run to first, in the main. 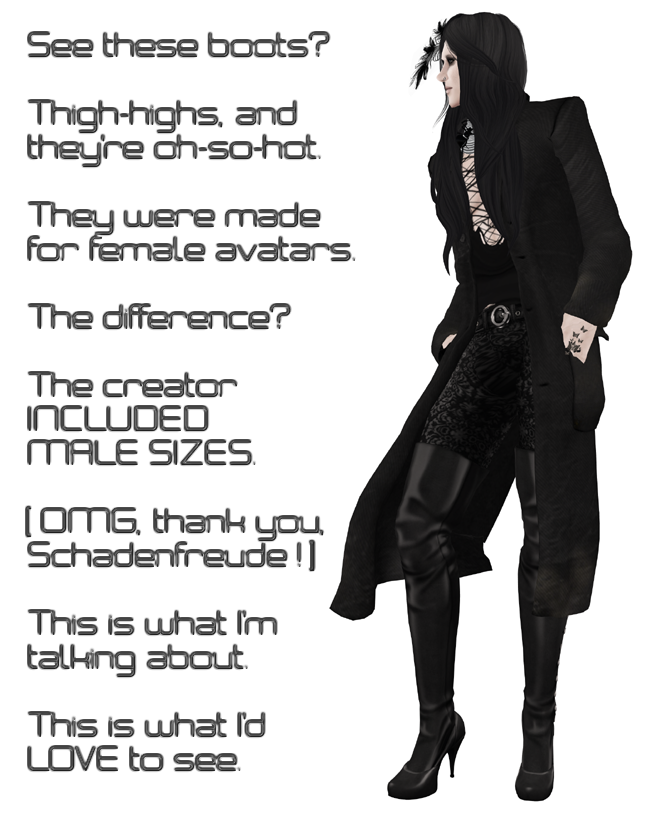 Schadenfreude made thigh-high boots for Collabor88 last Christmas. They were made for female avatars. The advertising included female avatars. I saw those boots at the event, and started drooling. I clicked to get the demos, in the (almost-vain) hope that there might be unrigged versions available that I could resize for my blokey legs and feet.

Mesh came out in 2011. And Christmas 2012 was the first fucking time that I’d found a designer including male-sized items in something specifically designed for women. Do you know how many I’ve found since then?

None. I’m sure they’re out there, but I ain’t found ’em. (Know of somewhere? Drop me a comment, because I would love to check it out.)

Last week, a designer whose group I’m in released the sexiest mesh leather pants I’ve ever seen. The texturing was utterly breathtaking. They were low-waisted, and had a slight dip at the base of the spine. Oh my god, so sexy. If there had been a male version, I would have hit that ‘buy’ button so hard…

…but they were female only. I couldn’t even try the demos because the shaping was very ‘hipped’ and – unless pants are fairly straight-legged in style in the first place – it’s not worth bothering. I’ve tried my old trick of wearing the ‘small’ sizes (these tend to have not much in the way of hips, although they often dig into the back of male avatars) and covering up with a jacket or coat. Sometimes that trick works pretty well, as with these boyish ladieswear mesh pants from Sn@tch: 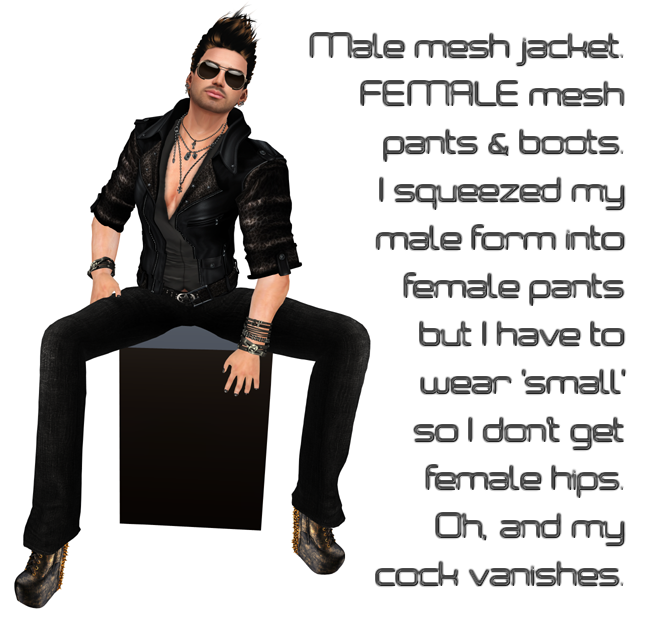 Losing your cock can be traumatic for some guys ;-) With system pants that was less of an issue (the package slider, while primitive, could make up for it – although I’ve seen some over-enthusiastic guys who think the bigger the bulge, the more ladies they’ll get. Um, wrong…) but with mesh ladies pants you need to have the response, “Oh, I tuck all the time!” ready for any amused finger-pointers.

With other, less-boyish, pants that trick works fine from a side view, viz. this look: Those are female pants. But, if I were to wear that outfit and turn to face the camera, my legs would look like sticks because I’m wearing the small size. And, while that might not be so bad on a very slender male avatar, Skell has shoulders, and he looks completely unbalanced (peanut gallery can shut up plz, kthx).

This was what I could do with modifiable sculpts and system clothing: 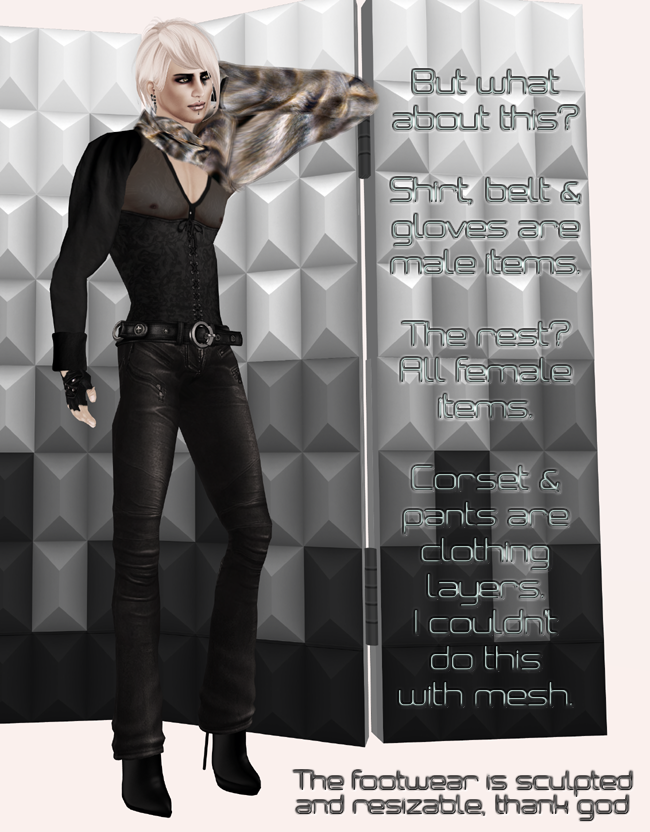 I would struggle to do that with mesh. I’ve tried countless mesh corsets and not found one that works on a male avatar yet.

Here’s another sculpt and system look that would be impossible with mesh right now: 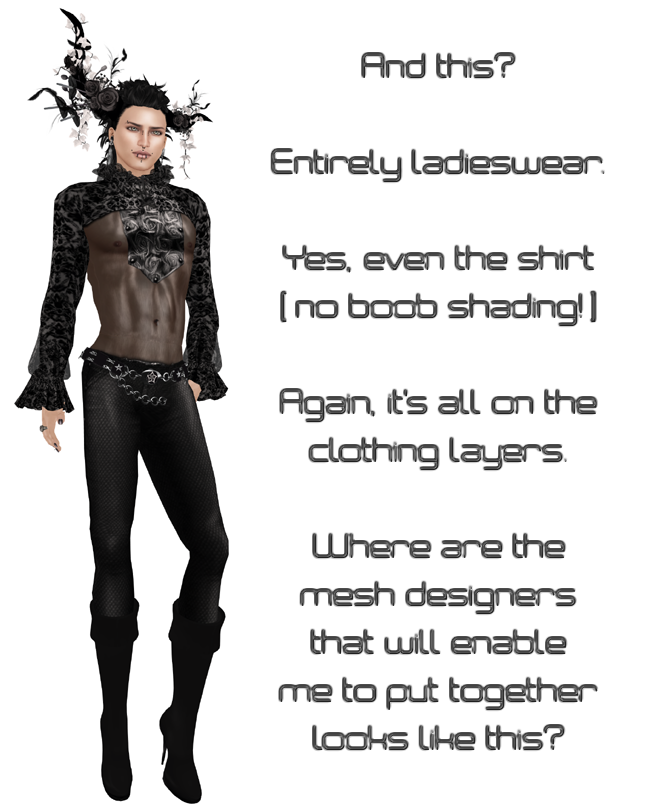 If it were purely down to a matter of personal taste, then this post would just be me bitchin’. It’s not. I don’t fly my freak flag a lot of the time, and I can be as ‘normo’ as anyone else. This is pretty normal for Skell: 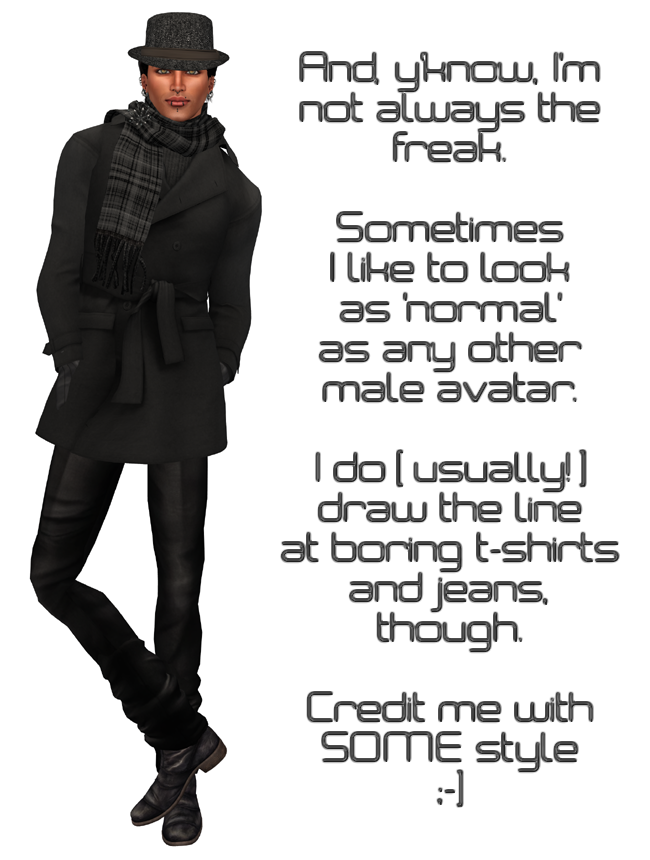 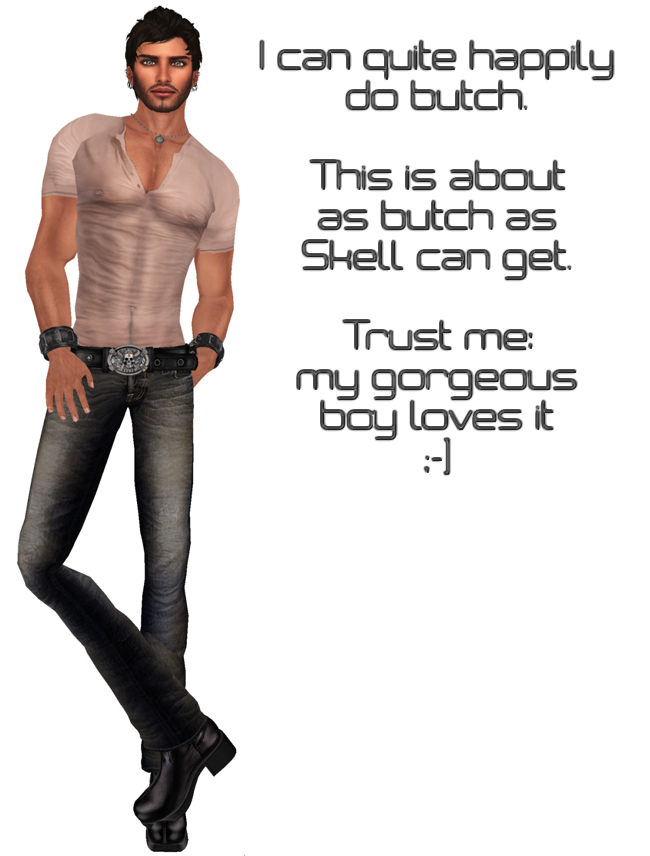 Here’s another ‘normal’ look, with a twist… 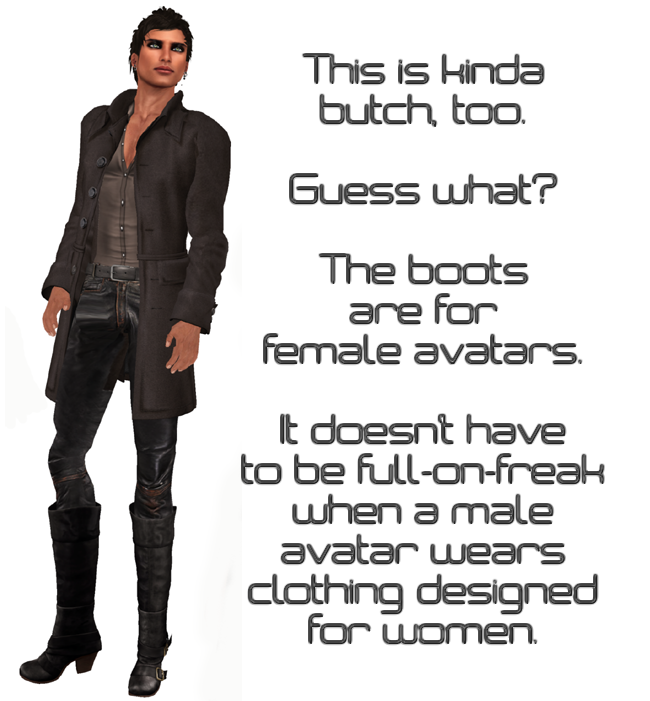 See the difference there, though, even when Skell is butch and/or normal? My own personal taste still  sees me wearing stuff that’s a bit different than the usual menswear offerings. And c’mon; those boots in the last pic don’t even look  ‘girly’ on Skell.  I’ll say it again: this post isn’t about personal taste.

It’s about choice. Having options. And the increasing lack of options for some of us.

What I’m NOT asking:

I’m not asking any  mesh designer to deviate from the style they usually make. If your store sells DropCrotch McNerdyGuy, I’m not poking you to start making high heels in men’s sizes.

What I AM asking:

When you make mesh clothing, consider the freaks. We’re out there, and in a much larger number than you realise. And we buy stuff.

When you make those sexy, low-waisted, gorgeously-textured leather pants for the girls, ask yourself if they might work on a guy. Not your jeans-n-tee SL partner, but a freakish guy like me. Would they work? Then pull down the hips, add a little more masculinity to the legs, and – for the love of god – don’t touch the waistband (ask Skell how many fabulous pairs of male pants he refuses to wear because they’re all high-waisted, and he’ll turn the air blue!). They might sell slowly at first, but as soon as one of us freaky boys gets wind of it, believe me: every freaky boy will know about it ;-)

When you make that stern, mannish suit, remind yourself of how hot  Annie Lennox looked in a man’s suit. Rein in the broad shoulders a bit, add just a touch of curve for breast and hip (not too much) and the butch girls will jump on it.

SL is a creative paradise, and that goes for those of us that wear  fashion as much as for those that design it. There will always be those that just want to click-and-wear, to buy a single outfit and put it all on and have done. But there’s a HUGE number of avatars out there who cherry pick from here and there, who take a pinch of this and a smidgen of that, who do new things with your fashion that you never even dreamed of.

Don’t edge us into uniformity. Give us a hand with keeping this ‘ere freak flag flapping in the breeze.

Edit #1: There’s discussion about this issue on the Flickr image that I linked to here with, if you want to follow over there.

Edit #2: I’m seeing some responses out there (mainly from female avatars) along the lines of, “I have the same problem because I have a curvy avi/big butt etc,” Ladies, I hear ya. Finding mesh clothing for any  shape that deviates from ‘the norm’ that’s been set is damned hard, but that’s a whole ‘nother post. This post isn’t concerned with the lack of clothing that caters for a specific body shape within the same gender as the avatar  (because, if it was, it would be endless because there are as many differing body shapes as there are stars in the Windlight sky). Rather, it’s about gender-biased clothing: the fact that butch girls struggle to find menswear that doesn’t render their still-feminine body into that of a broad-shouldered, zero-hipped male, and that femme boys are mostly shit out of luck when it comes to wearing most of the hot clothing intended for females because hey, boobs and hips and all that ‘womanly curves’ stuff.

I’m not  negating the very valid issues surrounding mesh and body image in general. I could bitch for hours about that, too. Just not in this post :-)

One thought on “An open letter to mesh clothing designers”