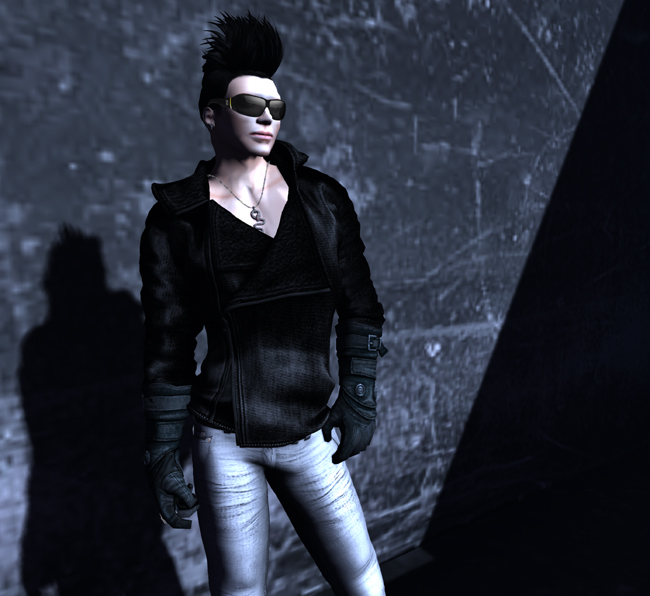 Menswear Fashion Week is the one large SL event that makes my wallet quake. Invariably, I end up spending stupendously scary amounts of L$, but likewise I end up discovering new-to-me designers. MFW attracts a diverse mix of stylish fashionistos, waddling noobs, and a surprising amount of female avatars (who are probably shopping for their partners, although the more savvy creators at the event often put out one or two items of womenswear; smart move, that).

My big weakness is accessories, and my inventory is organised to a terrifying degree, otherwise I would never find a damn thing. This year’s MFW saw me adding to those folders with several thousand L$-worth of stuff. In this post: new shades from ZOOM, hair from Mr. C, and jewellery from GlamDammit. 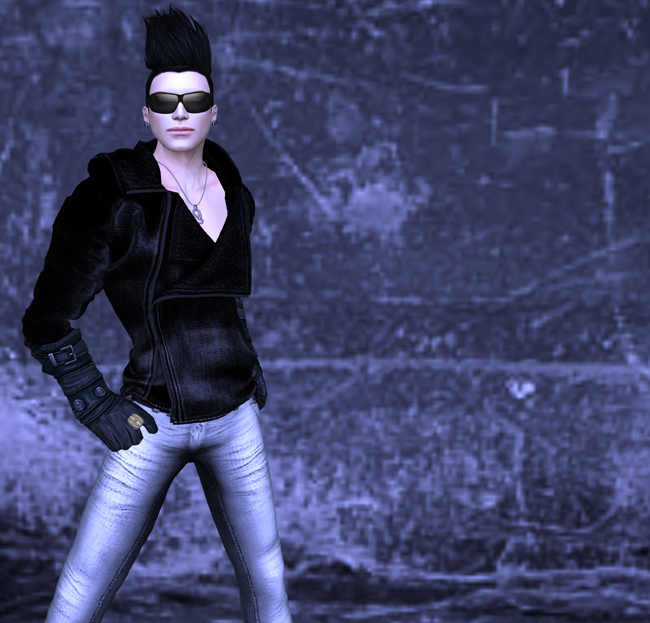 I swear, if getting High Hair was as easy IRL as it is in SL, Sassoon, Worthington, Clarke et al would go out of business. And it even stays that high when you sleep on it! I took a risk on this style, as it’s pretty far out there, even for Skell. A decent hairbase (Exile’s freebie fatpack will work with just about any style you own) is a must, and I’ve been able to work this ‘do into numerous outfits. It’s a keeper, whether I’ve gone urban street or totally glammed-out.

The jacket from Xplosion is beautifully-styled; a great loose-lapel hooded fabric look that has just enough flare at the bottom to work over most mesh pants (yeah, don’t you just hate it when you put a jacket over mesh pants and the pants poke through?) and comes with four different linings per purchased colour (black, beige, blue, and red). Shown here – naturally; this is Skell, after all – is the black variant.

ZOOM is a new store on the grid, and the sunglasses they presented at MFW were so damned good I bought the compan– uh, the whole lot. I’ll feature the aviators later, but shown here is the Eclipse style. Sleek, well-textured, with a simple resize menu. 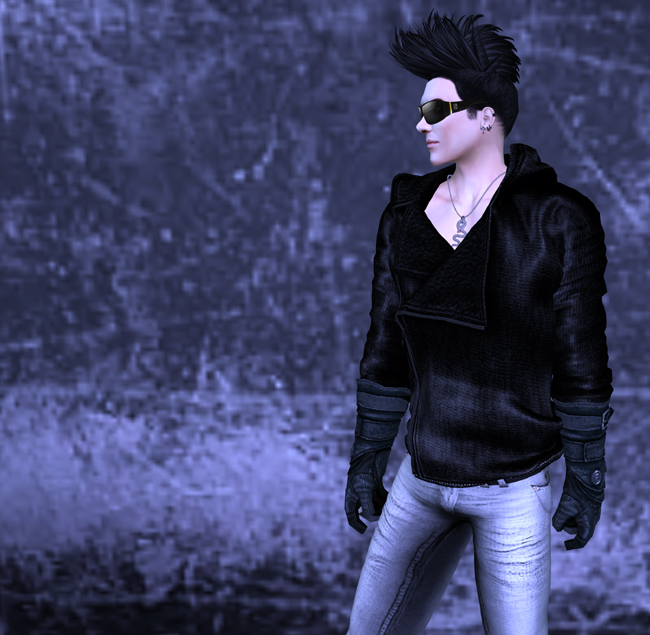 DECO, ah, DECO. Is there anyone who didn’t leg it to that store when they recently held a L$50 sale on all footwear? While I was there, snapping up bargains, I also snapped up these pilot gloves, which work brilliantly with the Xplosion jacket. Sure, there’s a tiny bit of jacket bleed-through at the top of the gloves, but it’s at the back of the arm and not all that noticable, especially if you’re wearing the black jacket.

I first spotted the GlamDammit jewellery set at the Hollywood event, and it appeared again at MFW. This time I snapped it up. The Snakes Alive set is partial mesh and includes two ‘click and add’ rings (attaching to different fingers).

The Tatum pants are by Fiend, and it’s so good to find acid-wash in SL! Nice uptilt at the front hem, which allows for varying footwear styles. And, speaking of footwear, yeah, that’s DECO again, with the Trail boots that I’ve worn to death. Good job mesh doesn’t get holes in it ;-) 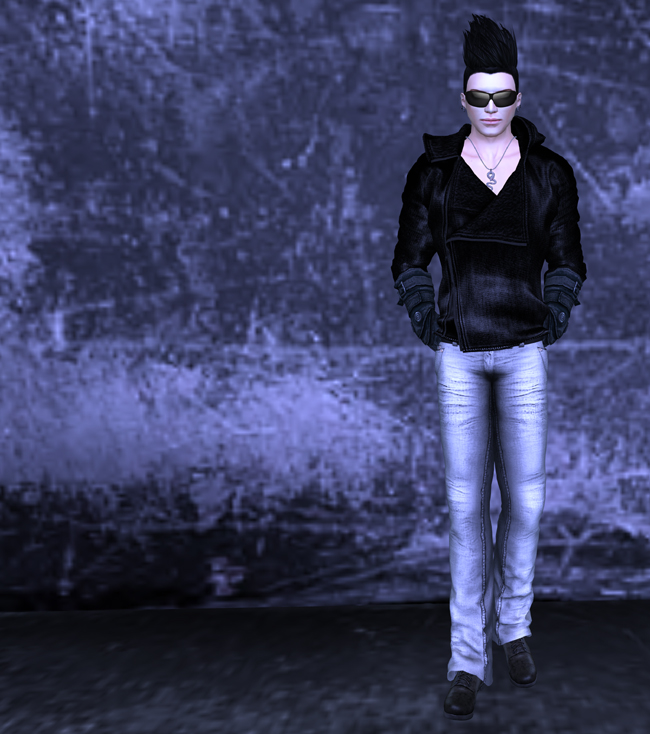 Not too visible here, but Skell’s usually pierced somewhere (*cough*), and this time it’s his ears. Pekka are one of my go-to piercing stores. Sometimes sculpt, sometimes mesh, their items are easy to edit (resizer script and manual edit – thank the prim gods!) and unisex.

Lastly (but not leastly) Skell’s skin is from Fruk. The Rock of Ages variant of the Bennett skin was a limited edition for a previous Men’s Department collection, but I’ve been wearing Fruk skins more and more often. They’re incredibly versatile, going from urban looks (as above) to full-on androgyne (with a bit of makeup).

You want credits? Of course you fucking do! Since most creators keep their profiles up-to-date with current store locations, I’m linking to profiles, rather than stores. Stores move; creators don’t move quite as much ;-)