I wasn’t going to do this week’s Monday Meme (I didn’t do last week’s, either) because it’s all about mesh bodies, and I don’t own one. It’s also a “mesh body revolution” version of the “What’s Your Digits?” meme that I did way back here on Flickr in… Christ, 2011? Now I feel old :-(

But then, after I’d slept on it and woke up this morning with my knees giving me gyp (RL point of note: my knees are completely fucked, thanks to injuries sustained when I was younger), and plenty of crotchety thoughts running through my head as a result, I thought, “Hey, I do  have things to say about mesh bodies. They’re probably not going to be nice  things that other people will like, but since when has that stopped me from speaking up on my own damn blog before now?”

So, consider this as advance warning: This post was typed when in pain and feeling pretty annoyed about that fact. And I think my banner image sums up my feelings about mesh bodies nicely.

NOTE: Scroll down if you’re only interested in the fashion stuff :-) 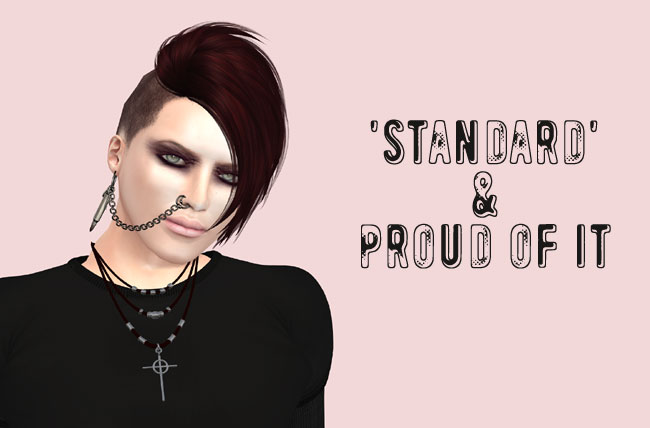 Meme Instructions: Share your avatar’s digits and/or answer the following questions about mesh bodies. If you decide to share your digits, feel free to add your image to the Digits Flickr Group.

Do you currently own a mesh body? If so, do you wear it all the time or just once in a while? If not, skip to the fourth question.

No, I don’t. I’m surprised there’s not an extra part to this question for those that don’t  own a mesh body, so I’m going to add it below.  The reasons why people don’t  own mesh bodies are just as interesting to me as the thoughts of those who do, and without the possibility to air those thoughts I’ll admit that the meme felt very pro-mesh body, with those of us who have other feelings about them being ignored. I’m sure that wasn’t intentional, but I’m sorry; that’s how it came across to me. So here’s my addition to the meme:

If you don’t own a mesh body, why not?

*cracks knuckles* Where to begin?

There are currently four male mesh bodies on the market: Signature, Kauna, Tellaq, and TMP. Nobody but Signature themselves are making skin appliers for their mesh body, and the same goes for Kauna and Tellaq. I’ve tried a demo of the Signature body and had way too many issues (such as “severed head” syndrome) with it. I simply don’t like the shape and the look of the Kauna and Tellaq bodies. (Tellaq is far too muscular for Skell, plus it doesn’t have an alpha HUD. Sorry, but that’s a deal-breaker.) The hands on the Kauna avatar look decent, but oh man, the feet…

Now, as to TMP… I have some pretty strong feelings about this, and I’m not going to mince my words about them. I disagree strongly with their business practices. The whole issue of having to pre-load a card with money—money that you can only add in increments of round hundreds or thousands—and the fact that only the body itself costs a round number; with all the skins and appliers and other stuff costing random odd amounts such as L$375. Then there is the fact that, once it’s loaded onto your card, that money is non-refundable. If you loaded L$500 but only spent L$375, there is no way to get that spare L$125 back. You’re told that you can just add some more money to make it up to an amount you can spend, but every single amount  you can spend is oddly numbered. You will always  have a spare amount of non-refundable money on that card. Guess who has that money? Yep, TMP. Will they give it back? Nope; they’re “holding it for you”. In other words, you just stuck a couple of bucks in their hands, for free.

Then there is the fact that… you don’t even have the damn body in your inventory!  What fuckery is this, that you can make a purchase of that magnitude (I believe the full male body with the alpha HUD is L$5000, which—I would like to remind you—is approximately US$20 or £14) and you’re not permitted to have the object that you purchased in your inventory?! £14 is the price of a lunch, an “endless refill” coffee, and a couple of pints in my local Wetherspoons pub. Can you imagine ordering that, and the landlord giving you an empty plate, an empty pint glass, an empty mug, and a knife and fork and telling you, “Here’s your meal. We’re keeping your food, coffee, and beer behind the bar.”?

Thirdly, well I’m sorry, but I don’t know any  guy whose torso looks like that one, unless he’s spent an entire day tight-laced and has just taken the corset off. What the hell is with that torso pinching in under the ribcage like that? Just… NO.

I absolutely refuse to give TMP my custom. I refuse to even buy the demo (my opinions on the shape of it come from seeing other avatars wearing it).

And now I’m skipping to question 4.

How do you feel about mesh bodies in general?

Ambivalent, veering toward very very wary. I dislike intensely the way that mesh bodies are homogenising SL avatars, especially when combined with mesh heads (NONONO!). If I bought a mesh body (and it would have to be from another creator, not TMP) then the vast majority of my inventory would be useless, I would not be able to put together anywhere near  the number of individual looks that I currently can, and I would blend in nicely with the rest of the “normal”, perfect population. No thank you. I’ll stay lumpy, flawed, “standard”, and proud of it.

IF a decent mesh body (without a head) came out—Slink, I’m looking at you—then I would demo it, but as with all things in SL, I wouldn’t expect the same choice as female avatars get. Right now there are, at a rough guess, maybe five or six female mesh body options on the market (and probably a lot more, if you count the smaller stores’ options, and that’s not counting the various mesh boobs, butts, and god alone knows what else you ladies have to choose from), with appliers being made left, right, and centre for them. You ladies have oodles of choice when it comes to individualising your mesh bodies. Us guys are stuck with TMP as the “industry standard” (god help us) and from skimming my Flickr feed I’m seeing the same designers making the same male skin appliers, and… they all look so perfect, like smooth, anodyne androids. Yes, of course they’re beautiful. But that’s it. They’re all beautiful, and they’re all the same.

If there’s one thing I absolutely rail  against in SL, it’s sameness. We can be whatever and whoever the hell we want to be here, so why would we all want to look the same? Mesh clothing  is edging out fashion creativity and individuality enough as it is (just a glance at the average Mens Dept collection will show you the kind of mesh that’s being made for guys: hoodies, jeans, and sneakers galore), without mesh bodies and heads smoothing us out even more into bland perfection.

I’m not against  mesh bodies. If you have one and love it, then all power to you. SL is whatever we want, and I want to be individual, to be able to use any  of my 8-year-acquired inventory (including clothing layers), and to say “no thanks” to sameness.

What is one thing you would request from designers when it comes to mesh bodies?

More damned options of them for men! *sigh* Nobody’s bloody listening anyway, so I’m pretty much pissing into the wind. About the only versions I would opt for are either Slink or Belleza, and I’ve not heard a peep from either of those in months (Slink hands/feet updates notwithstanding). Belleza haven’t even released a new male skin  for probably over a year, so I guess they’re not really bothered about considering a male mesh body. 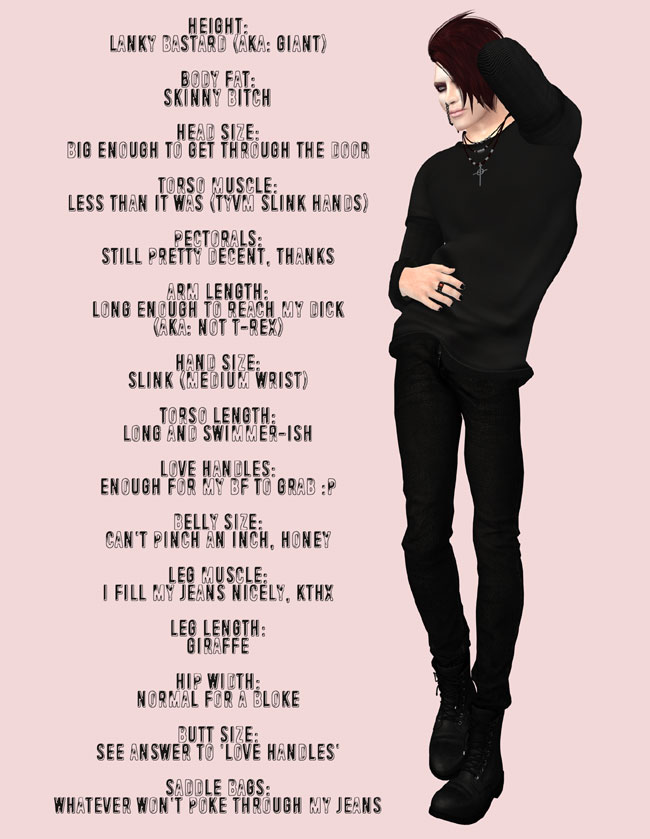 And now, onto the fashion stuff. Despite my bitching up there about “the average Mens Dept collection” this month’s actually yielded quite a bit of stuff that I could use. Consequently, purchases were made (unlike last month, where I barely bought a thing). Here’s an overview:

First up, though, new Exile hair. Gah! I always make with the grabbyhands when that dark grey sack lands in my inventory, and this choppy unisexy style for Collabor88 is no exception. I thought I’d go for a bit of colour this time (sit down, mother) so I’m wearing the “Sin” shade. I’ve picked that up a little in this necklace by CPD (Chaos, Panic, & Disorder!), by editing the thongs to be a similar shade: 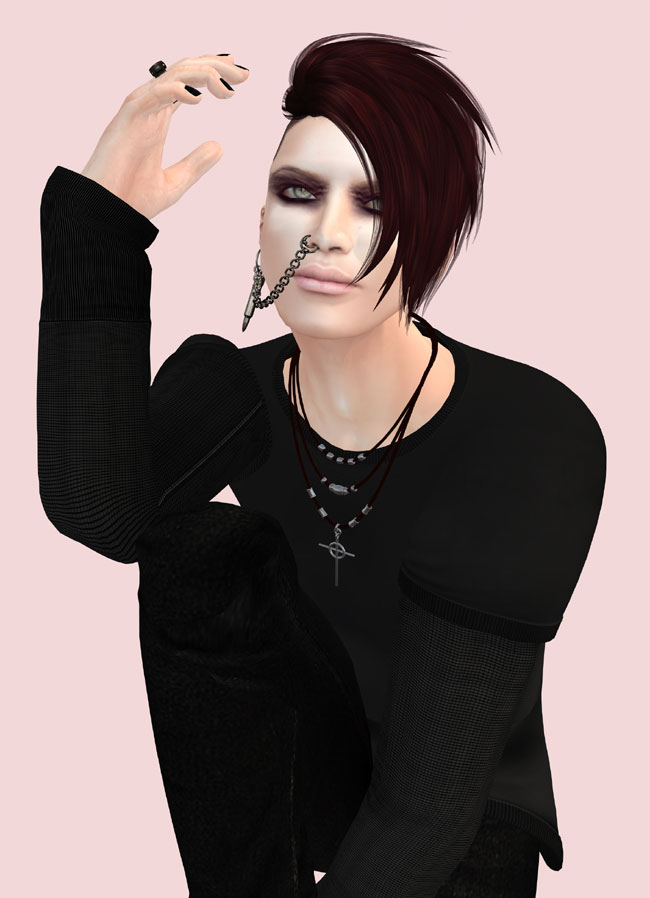 This great layered tee by Razor is just L$79 at this month’s Mens Dept collection, and at that price it’s something you ought to pounce on with as much celerity as I did. 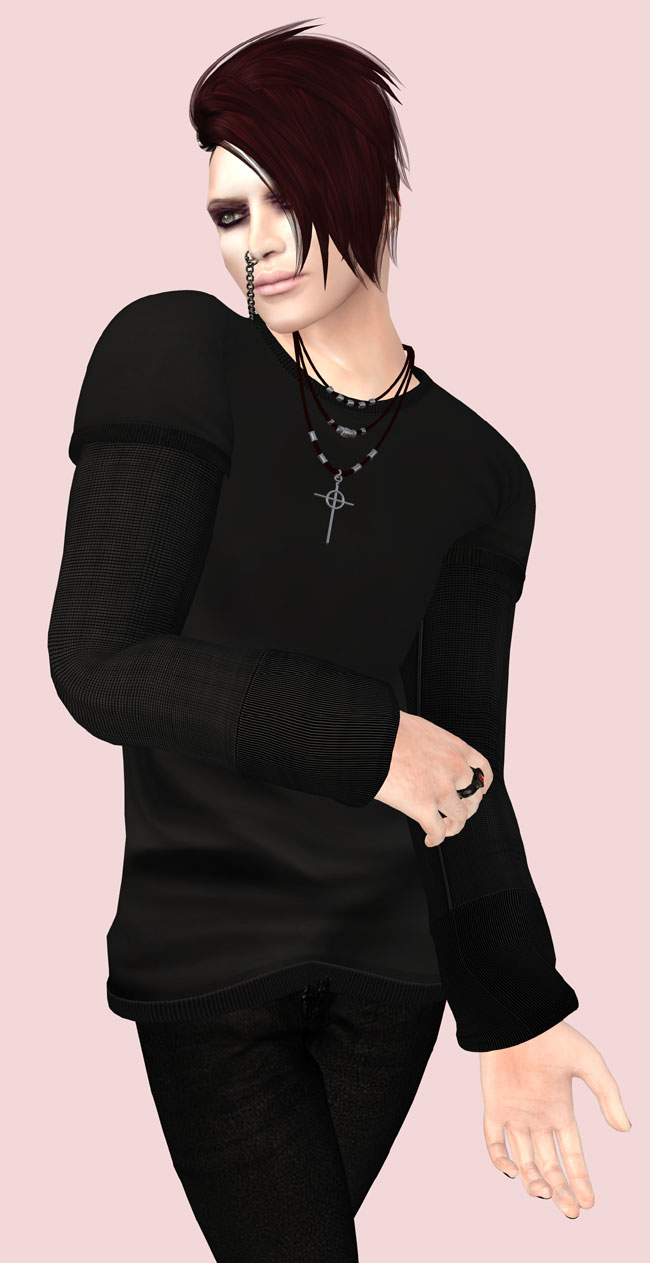 The makeup and nose chain are from a previous Secret Affair, and hopefully they’re now out in the relevant mainstores. Nail appliers by A:S:S, and the ring is by Mandala at The Mens Dept. The display is gold, but the HUD is hugely customisable, so don’t let the gold put you off it that’s not your colour. You also get the full set of jewellery for one really decent price.

Now, the skin. Oh man, the skin. I was surprised to see David Heather breaking into the skin market, but I was pleasantly  surprised when I demo’d their first offering. Pleasantly enough, in fact, to buy the two lightest shades of it. This is the palest one, and it’s positively luminous. I also love the thin, neat brows on it. 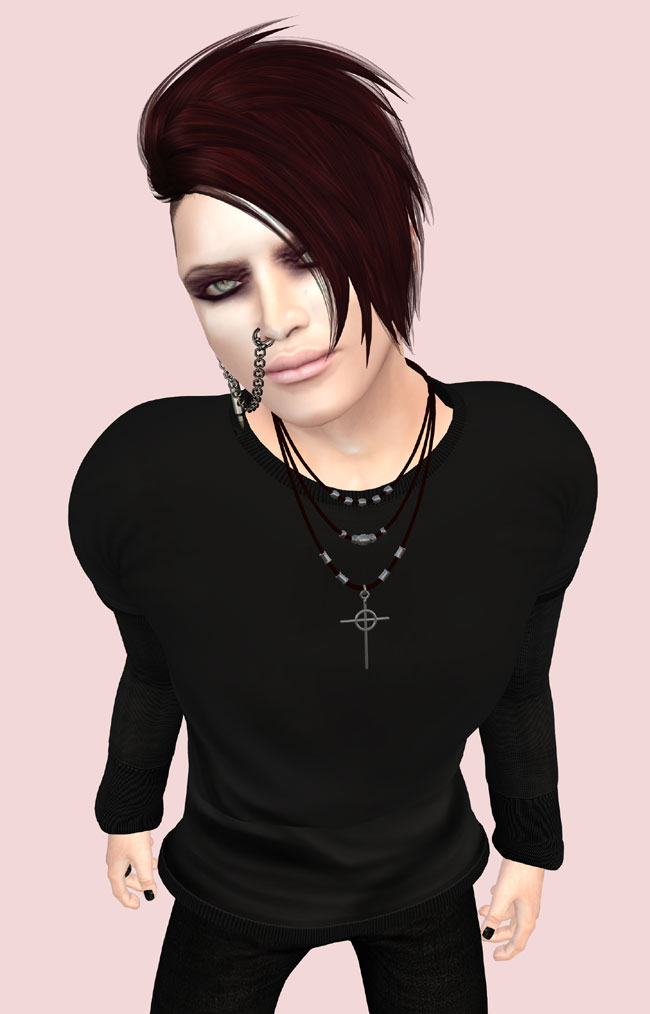 And, lastly, onto the pants and boots. And, oh! be joyful! Jeans that don’t  have the crotch sagging southward! I do love a nice pair of well-done skinnies (emphasis on the “well-done”, because there are some out there that just… no) and these ones by ISON MAN are perfect. Be aware, though, that the boots are attached to the jeans; they’re not separates. Also, for some reason, this set is listed as “jumper set” when it should really be “jeans and boots set” or something. Bit odd, but hey.

7 thoughts on “‘Standard’ and proud of it”