Inventory not loading? Avatar a cloud? Unable to change outfits or wear anything? You need to read this post. 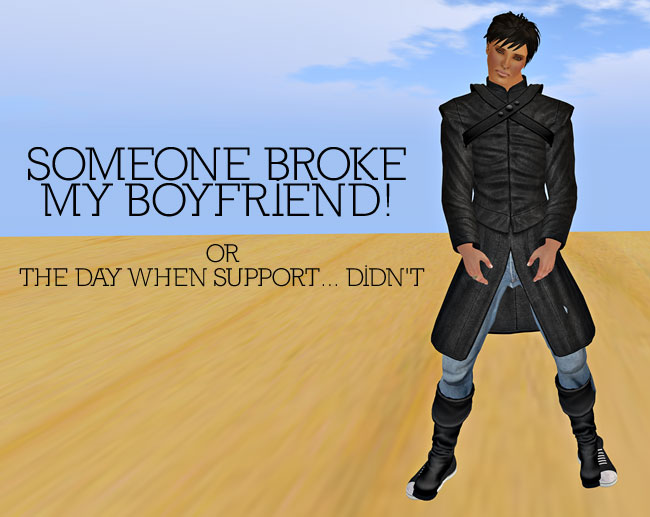 Last night, Daros and I were chatting outside of SL. It was getting late, I was yawning, and so he suggested we both log into SL for a goodnight kiss. On arriving there, I was greeted by a textual wail of, “I’m a cloud!”

He was still a cloud five minutes later, although he appeared perfectly normally to me. We tried the usual fix of changing his hairbase (the brow-shaper one) but that didn’t work. Several relogs later, this exchange took place:

Okay, so this was pretty serious. He was missing a third of his inventory, he couldn’t wear any outfits, he couldn’t even wear a single item, his outfit folders (of which–like me–he has hundreds) were all empty. And, about ten minutes after doing the Test Default Male avatar thing, he looked like this:

Right then. Time to crack knuckles and get that inventory cache cleared. So I talked him through how to do that on Firestorm, and he relogged. We waited for his inventory to load…

Well… shit. Right then. Drastic measures. A full, clean installation of Firestorm. We followed the proper procedures for that. Log back in, import his backed-up settings… and still a cloud with no inventory.

Okay, it was Live Chat time. I thought that maybe he was suffering something akin to the Current Outfit Folder corruption issue, or that Linden Lab needed to run the inventory fixing tool they have on his account. And, of course, Live Chat told him to download the latest official viewer. He did, installed it, shuddered his way through a login on that monstrosity, and sat at Pooley while his inventory… did  actually load.

…and he was a cloud again with no inventory. What in the ever-lovin’ name of FUCK was going on? We’d now been trying to fix this for over an hour and a half, and poor Daros was at the end of his tether, figuring that something was completely fucked up in Firestorm and that he’d have to use the official viewer from now on. I was scratching my head and thinking of all potential issues:

So I went off in search of those. Five minutes later, I ended up on the official forums. And, by chance, I spotted this thread on the ‘server’ sub-forum: What is going on today with inventory and clouding?  It was dated from April 7th, and Daros hadn’t logged in since before then (as we usually chat on a daily basis elsewhere). I quickly scrolled down and then I saw this reply from Inara Pey:

[ … ] as of today, all viewers must  have HTTP Inventory enabled in order for your inventory to load following a refresh and for your avatar to render, as service-side support for UDP fetching has been deprecated by the Lab grid-wide.

Your inventory should fetch correctly / your avatar should render OK once you have re-logged. The option to disable HTTP Inventory will be removed from the viewer in a future release.

I pasted that to Daros and he quickly relogged back into Firestorm. Sure enough, HTTP Inventory was not checked  in his viewer (it was checked in mine, because ages ago I suffered from the texture-thrashing issue and I remembered seeing someone mention checking HTTP textures was a way to stop it. I must have checked both HTTP options, which was why I was having no problems at all).

He checked HTTP Inventory (and textures, just to be safe), relogged and BINGO! He could see himself, and his inventory loaded just fine.

In total, it took me and Daros TWO HOURS to figure all of this out, and by the end of it I was dropping with sleep and poor Daros was frustrated as hell. That has to be the longest goodnight kiss ever.

If you’re having all of these issues:

Then open the Develop menu of your viewer (CTRL + ALT + Q) and scroll down to ensure that HTTP Inventory has a tick or checkmark next to it. Relog, and everything should be fine.