One thing I ask of you,
Let me be the one you back that ass to. 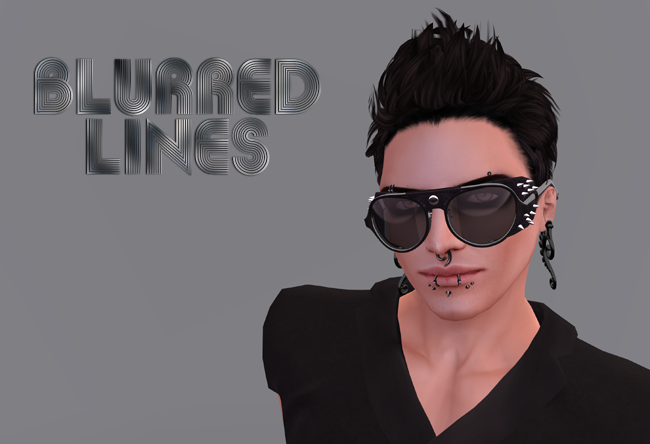 I promised you I would be honest about fashion that I feature on this blog, so I’m going to be straight with you (irony, I haz it) with regard to this outfit. I love the fuck out of it. It’s everything I’ve looked for in a male outfit in SL. But… I’m slightly disappointed and puzzled by the way it was marketed.

UPDATE: Scroll down for an addendum, because this issue has now been handsomely fixed :-)

I actually legged it to the store to buy this (cost for one colour = L$750) because of the notecard, which stated the following:

Who said skirts are only for girls? Not us!

A man who feels confidant [sic] of his masculinity dares to think outside the box will certainly wear the GizzA – Mills Suit.

With a sleeveless blazer type belted jacket and matching skirt, worn over skinny leather pants and with flaring feathers adorning the shoulders, this suit is edgy to the max.

Well, you know me by now. If that isn’t a description that’s going to see me digging deep into my wallet, then I don’t know what is. Here’s the ad image: 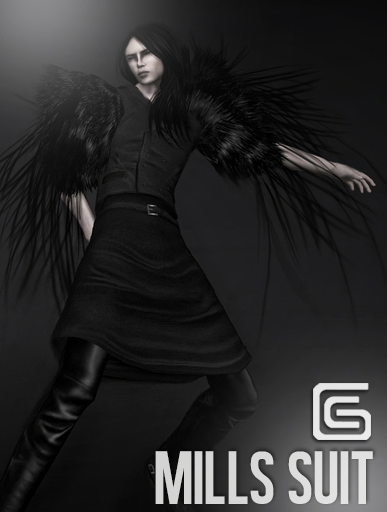 But on unpacking the outfit? No feathers. Thinking it was a mistake, I contacted GizzA’s support, only to be told the following:

Feathers is styling on ad…, if you see the vendor, its doesn’t have feathers

Um. Okay. So, the feathers were mentioned as a selling point in the notecard, and featured on the main ad image. I even screencapped the (no modify) notecard for this post. Highlighting added by me in Photoshop, to show you the selling point: 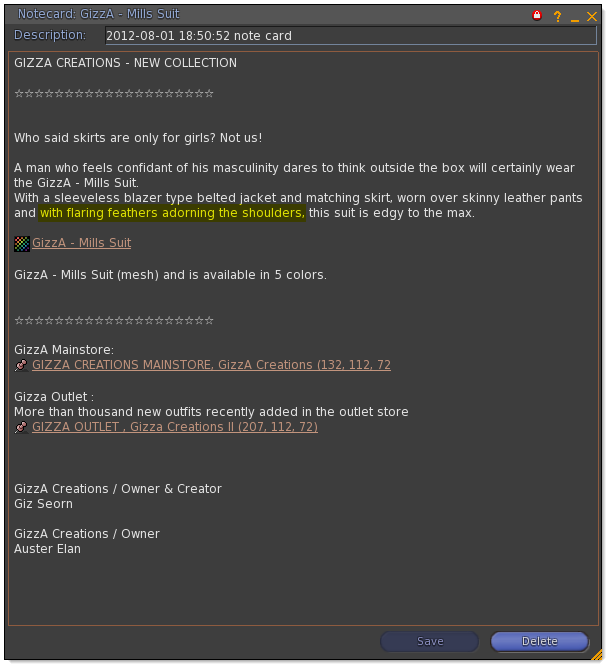 Yes, on the actual ‘cutouts’ of the suits (the ones you click to buy individual colours) there are no feathers, but – if you look at the image above – you’d probably assume the same as me: cramming five suit images together in a clickable way with whacking great feathers on the shoulders of each would necessitate a sales wall about 15m long!

The store’s support forwarded my notecard to one of the GizzA owners, who contacted me a few days later to confirm that the feathers were, indeed, just styling for the ad and not included:

this special part.. normaly not sales…  only show part….

(He did very kindly send me the feathers used in the ad, but since they’re not part of the package that’s on sale, I haven’t included them in this blog post.)

Okay. I really don’t understand why they’re not included, because the suit – as packed in the folder – even includes a pair of boots, so why not the feathers? I’m actually scratching my head over here, but… *shrug* I’m not going to pursue it further. It’s noted here, for those of you that want to buy the outfit: there are no feathers.

UPDATE: The owner has contacted me (I was offline at the time, and still haven’t managed time to log in and reply) and informed me that the feathers are now in all the sales packages. Thank you! :-)

Now, having set that out there (hopefully without sounding bitchy, because I still absolutely love the hell out of this suit, and haven’t taken it off since I got it) onto the outfit itself.

Yeah. God-fucking-damn. Let’s get a little bit closer, shall we?

The skirt and pants are one item (which, given the limitations of mesh, works best; can you imagine trying to layer a separate mesh skirt over mesh pants? Poke-through everywhere!)

I’ve styled the suit with some absolutely awesome mesh glasses from Dutch, and boots from Wertina (the boots included in the outfit are great, but I wanted something a bit more edgy for this look). Hair is by Redgrave, and the earrings are some of my favourites by The Plastik. Full credits are at the end of the post. I’m just going to give you images to roll around in and get all sticky and wet ;-)

Close-up on those boots: 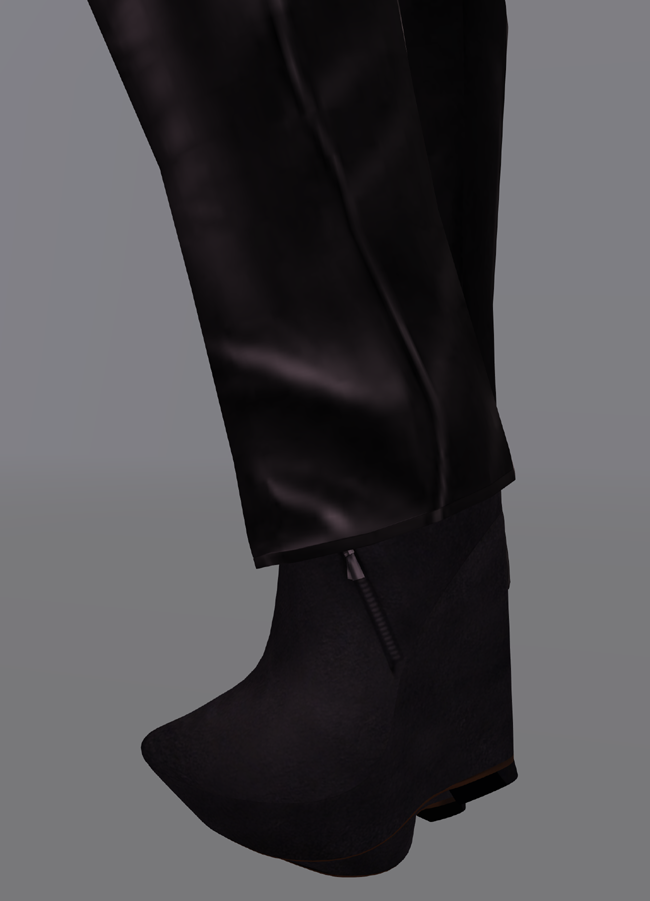 Now, there are a few minor issues with the suit. The shoulder openings are circular all the way around, and some poses (notably those that push the arms in/forward/back) will make them poke through your biceps. Skell has one hands-clasped-behind-back AO animation that does this, but the suit is good enough that I’m happy to overlook it. It’s a minor issue that doesn’t detract too much. Here are a couple of raw, unedited shots of that:

That issue can also be seen in the following image, together with a small poke-through issue in the centre of the chest in poses that lean slightly forward:

BUT! You know what? For all that, it’s still an incredible outfit, and – as I’ve already mentioned – I’m glad that pixel clothes don’t get stinky, because Skell’s not been out of this since last week ;-)

And here’s your music. Pretty much guaranteed that the video will only appeal to straight men, bisexuals, and lesbians, but the song is all over the radio here and I can’t stop dancing around whenever I hear it.