There’s no one left in the world, I’m gunslingin’
Don’t give a damn if I go down, down, down. 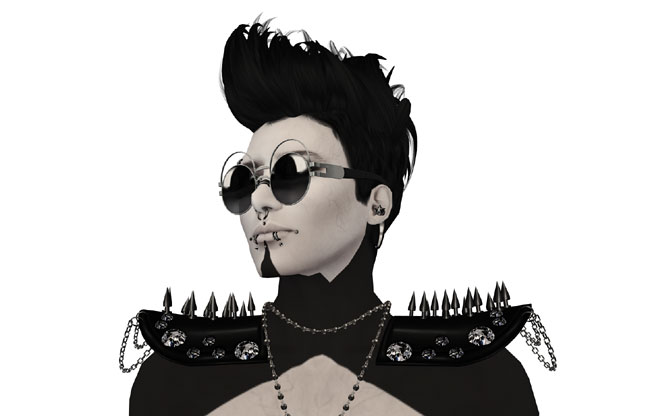 Give me a bangin’ new dance track, and I’ll invariably come up with a bangin’ great look. This one came together after a visit to Black Fashion Fair; a 2-sim event that’s running until May 4th. When I visited it was busy as hell and laggy as fuck, so—as ever—check the gallery for the event at Seraphim, so you can note down what you like the look of. There are little kiosks all around both sims with a numbered map and accompanying SLurls list, so that’s a great help.

Anyhow, before I chairdance my way onto the floor, lemme show you this Fifty Shades of Bonkers that I managed to haul together today ;-)

Oh, hell YES. Where the fuck to begin?! Well, I’ve still not been around all of Black Fashion Fair, so there’ll probably be more coming out of there from me soon, but what I picked up today were the boots, the necklace, and the shoulder pads. 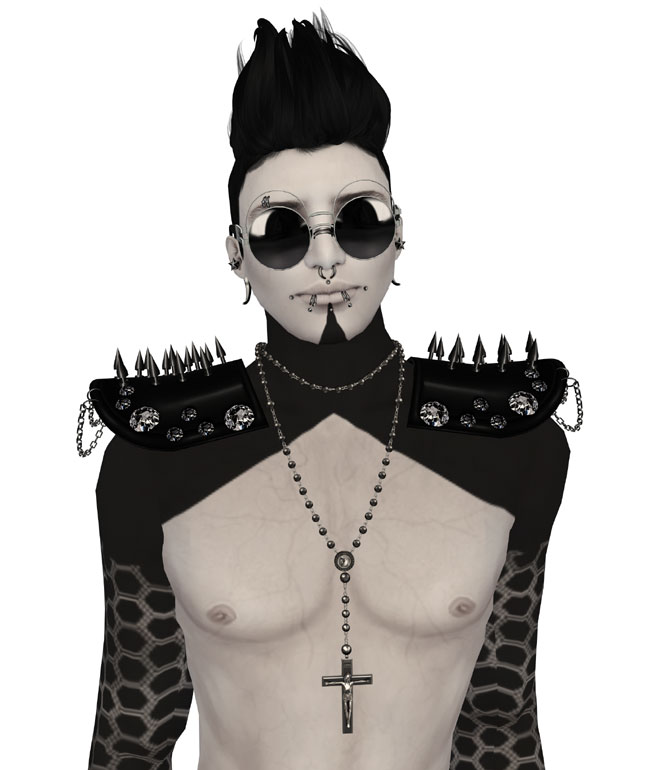 You know me: I’m a sucker for epaulettes and shoulder pads. I must’ve been Joan Collins in a previous— Oh, hang on. She’s still alive, ain’t she? XD These ones are from Cheeky (I so am), and available in several colours. Naturally, it being Black Fashion Fair, and Skell being Prince of Darkness(ish) I picked up the black versions.

The necklace is another stunner from Swallow, whose items I’m loving at the moment. From skins to accessories, they’re coming out with some fabulous stuff. Also, if you’re a group member, make sure you head over to the store and pick up the plentiful group gifts available. This necklace is customisable as hell, and you can have it avec  or sans  Jesus. You get long and short versions (I’m wearing both here, as the short is actually just the higher ‘loop’ of the necklace). 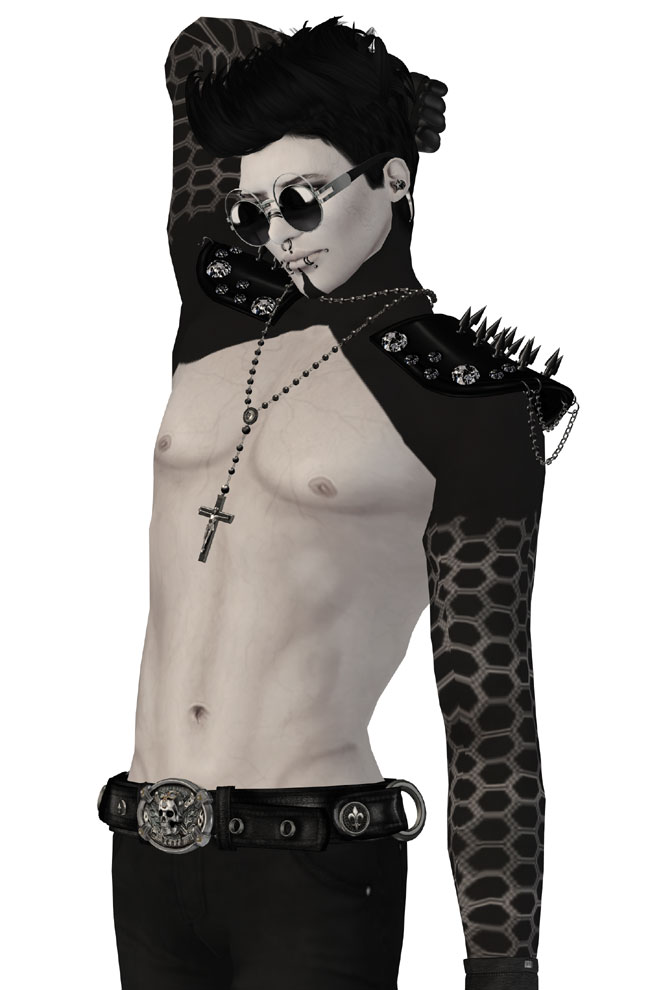 The amazing tats are ones that I picked up at Skin Fair this year, and they’re by Suicide Gurls. The skin, too, is one of… many that I picked up by The Plastik (seriously, I spent several thousand on these skins; I loved the broken, crackled effect of them that much).

I dithered a bit over these glasses by Le Primitif, but eventually took a chance on them, and I’m glad that I did. You’ll get a clear pair and a black-lensed pair in the set, available at The Mens Dept this month. I love unusual eyewear, and these are certainly that. (Did that make sense? It’s 03:30am and I’m kinda sleep-deprived…) 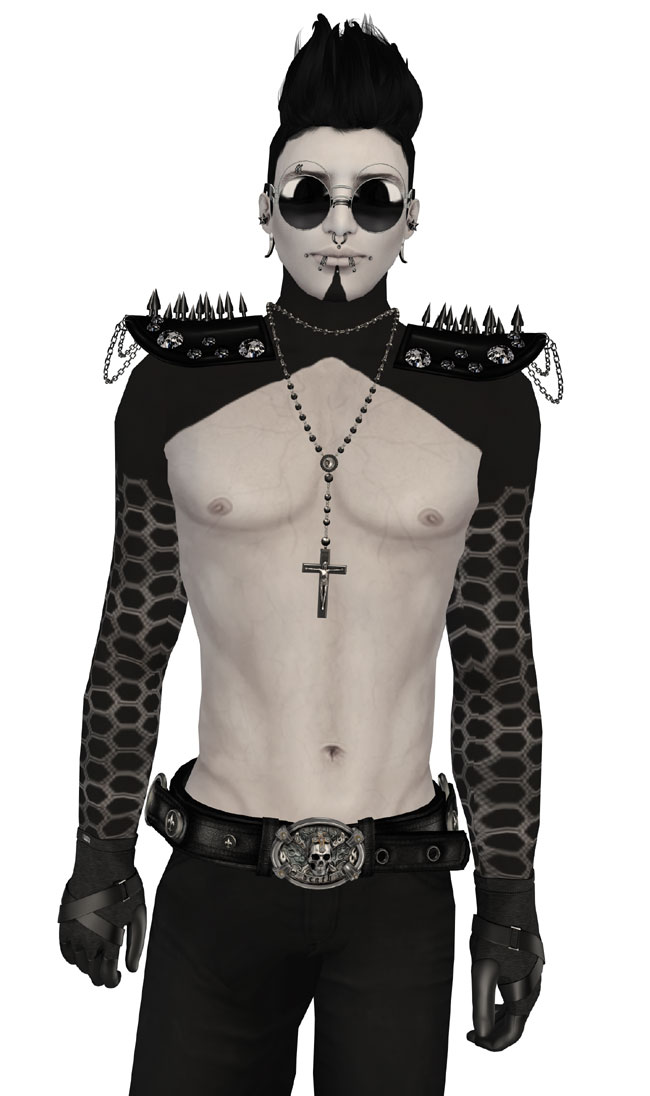 The gloves are another Mens Dept item, from VRSION (now without the KONVERT, for some reason). I first heard of this store at Futurewave a couple of years ago, pounced on their offering there, and have been keeping tabs on them ever since. I’ll be blogging the rest of their TMD outfit soon.

I was happy as a pig in shit (I’m sorry! It’s late and I’m punchy, ‘kay?) to see a new clothing layer pants release from Sn@tch (with all the expected appliers, for all of you mesh bod aficionados). These Debbie Ripped Jeans (named, I presume, after the still-gorgeous Ms Harry) have a great textured skully belt (which I’m covering with an equally fab skully belt from Lapointe & Bastchild; forgive me, Ivey!).

Lastly, also at Black Fashion Fair, I picked up these shitkickers by Angel of Metal, who also brought some fucking AWESOME unisex platforms to the event (seriously, my sartorial darlings, run for those things!). 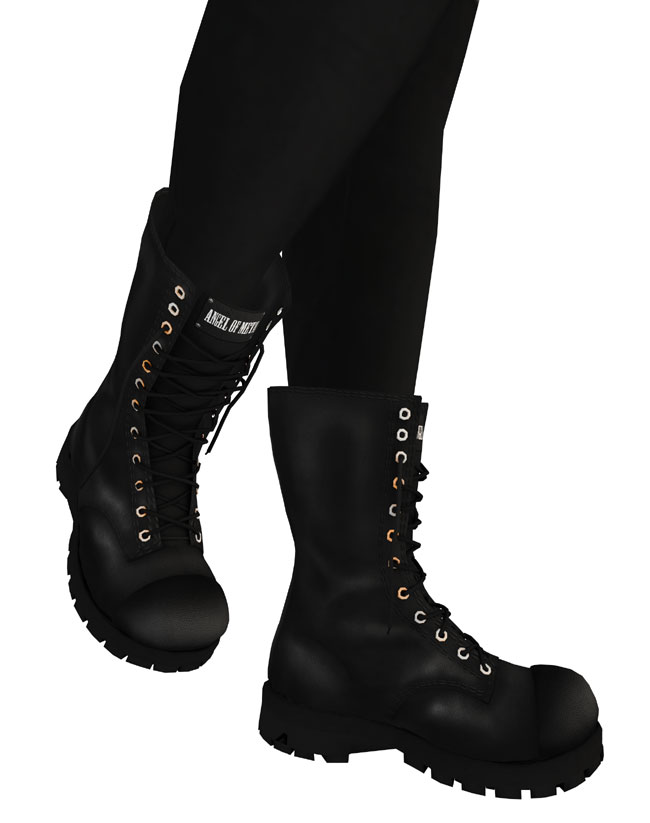 Right, I’m gonna get back to my chairdancing ;-) (And if there are no sleep-deprived typos in this post to embarrass me tomorrow morning… er, afternoon, then I’ll be bloody gobsmacked.)

Your music. Yeah, I’ll bet you didn’t expect him to sound like that, did ya? ;-)