This week’s Monday Meme sees me in an introspective mood. Berry is asking “What is your perception of Second Life?” and she’s suggesting that we film a one-minute video of our favourite location inworld, and/or answer some questions as well.

Well, y’know, I can’t make a film of my favourite place in SL because he isn’t logged in right now <3

What I can  do, though, is write about (and dig up screenshots from ancient backup hard drive folders) some of those places I’ve called ‘home’ or hung out in a lot over the almost-eight years I’ve been inworld. I’ll answer the questions among the nostalgia, okay? :-)

When I first rezzed in SL it was off the back of a bad RL relationship. Consequently, when I was griefed three times within a few hours of logging in for the first time, I felt pretty raw. Daros encouraged me back, having rented a small plot of land in Jindalrae (a sim which we now almost completely own). This is what I logged on to: 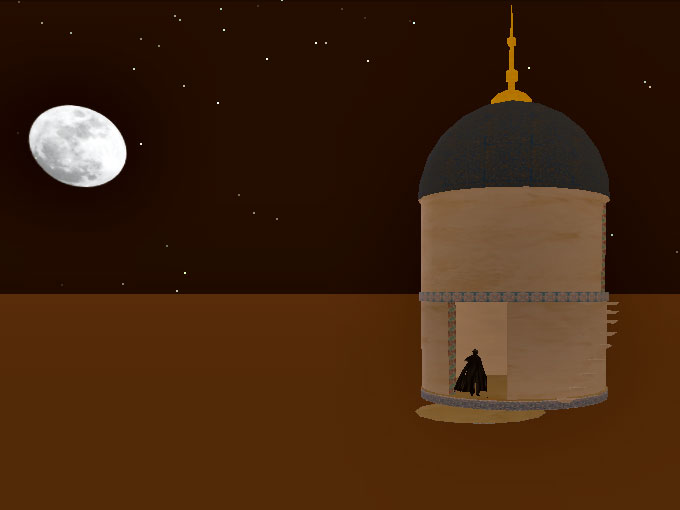 He’d built me a home. A safe place to go to, high up in the air. A few days later that little home was swapped out for what we called The Safehouse: a skybox with bright stained glass windows and partitioned living areas. He built that, too. 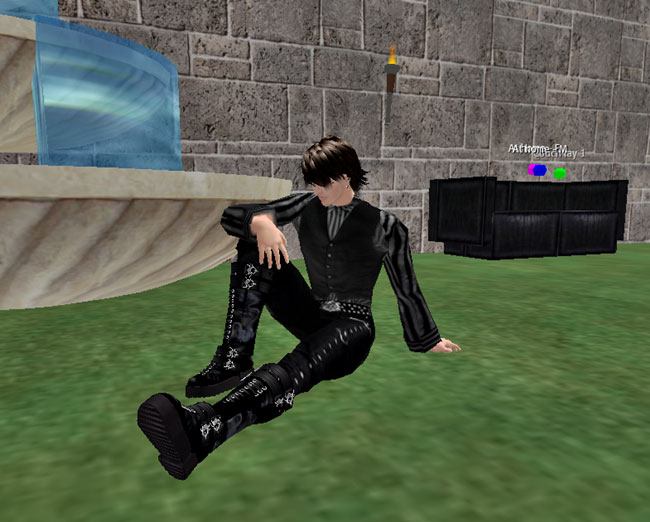 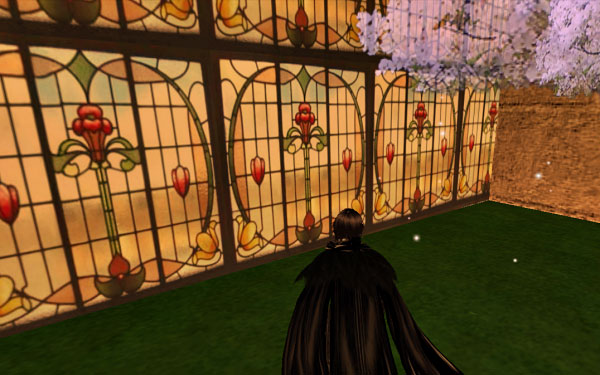 When someone loves you enough to want to protect you and create a safe space for you, what else can that space be but ‘home’?

This was our first purchased home on that little plot of land: a beautiful open villa by Lily Lioncourt of Fire and Water. 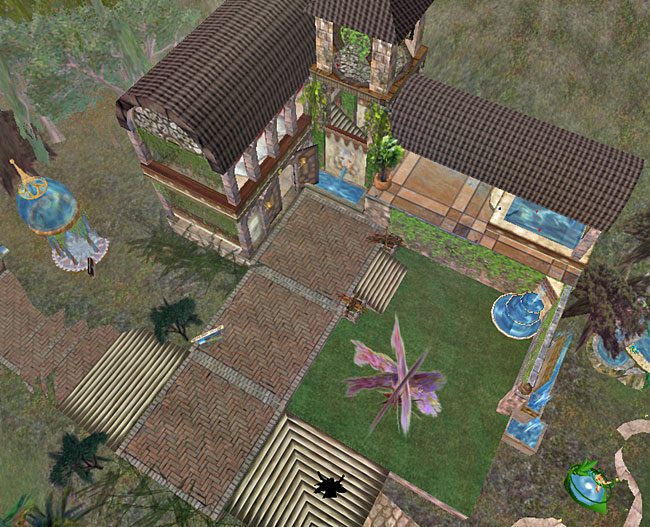 The view from the porch, complete with tiny boyfriend in the distance. 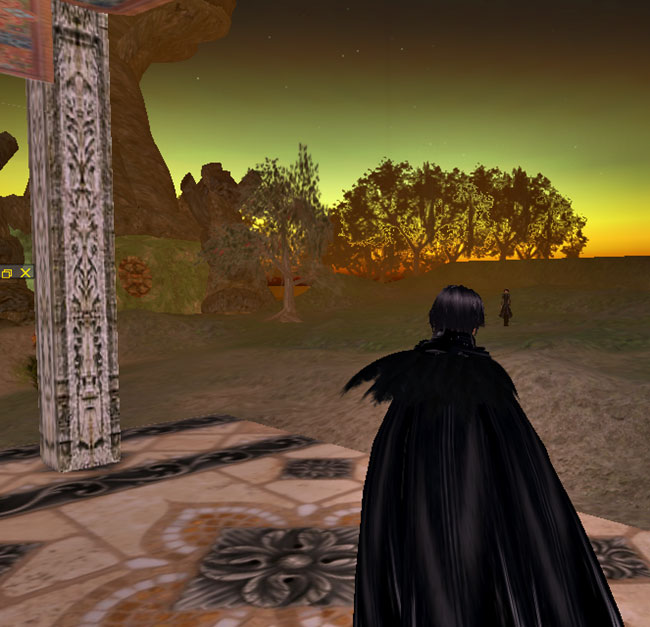 What is your perception of Second Life?

My personal perception is of a place that is literally my second home. I feel as secure there as I do in my bricks-and-mortar home in real life. It’s a place where I can be creative, where I can bridge the 5000 miles between me and Daros and really feel as if he’s sitting right there with me. It’s something I’ve never managed to explain to anyone who has never logged in; that feeling of connection and association with your avatar. Logging into SL can feel like coming home and closing the front door after a long, hard day of slog at work. There have been nights when I’ve felt so comfortable—so right—logged inworld that I’ve stayed there while I slept in real life. As soon as Daros logs in we’re together, and I greet him with a kiss, and when I log off (or we both do) we kiss again before Ctrl-Q. Something would be missing from my life if I didn’t get those kisses.

Back to the homes, and this one is still in Jindalrae, albeit with the tower section now removed so the house is floating in space. We call it our Treehouse, and we’ve remodelled it so many times over the years. 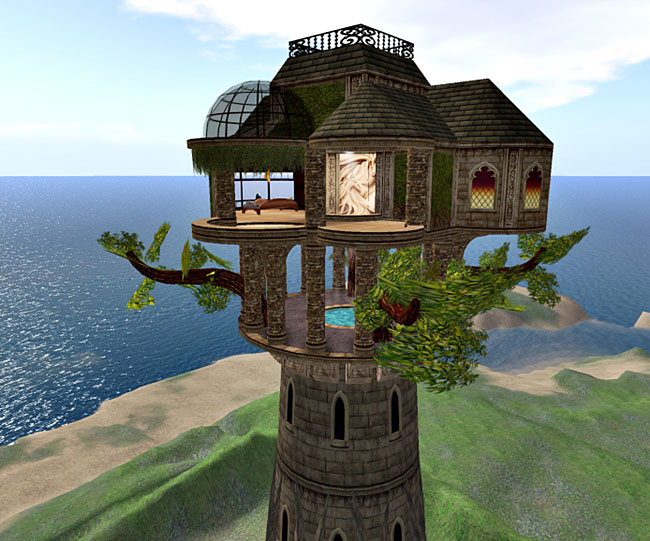 The view is ‘see for miles’. 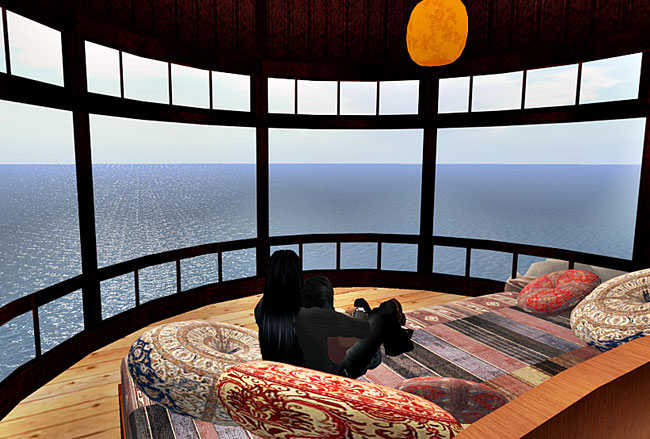 I added optional curtains and a warm fire later on, plus some furs and cushions to lounge on. 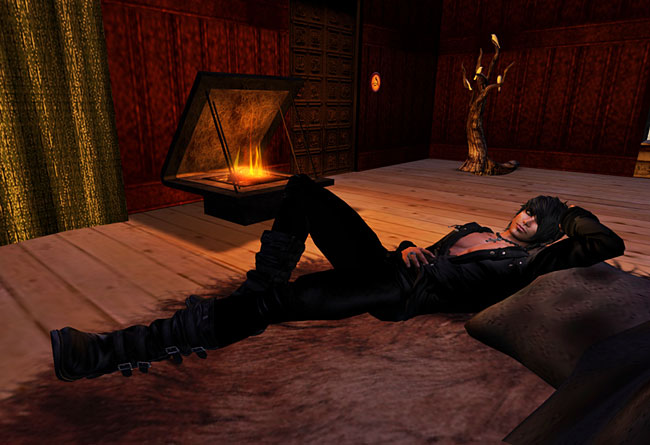 Down in the lower area, after Daros remodelled it several years ago with a lot of Moroccan-influenced furniture. 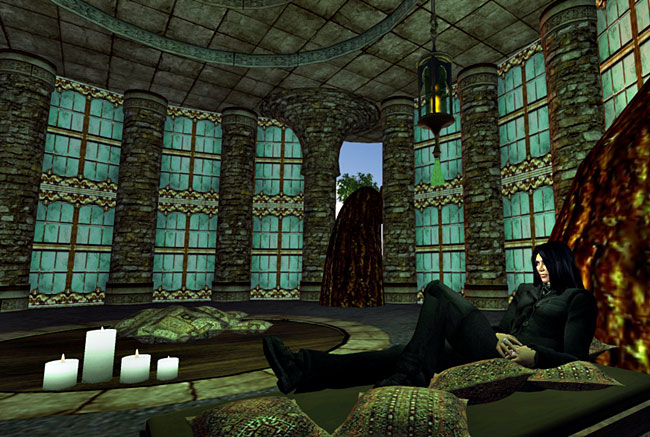 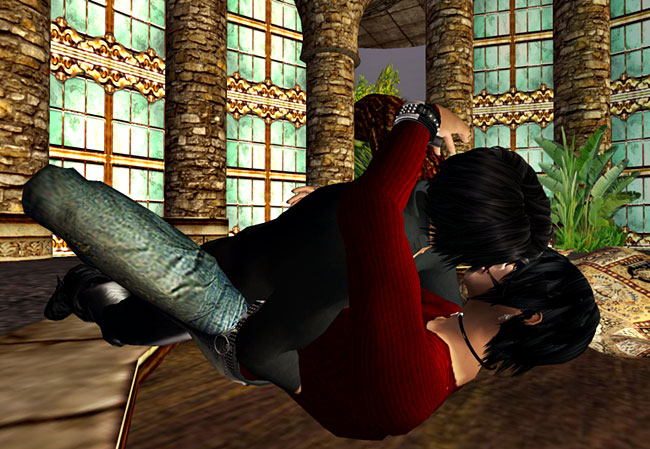 Do you feel the portrayal or reputation Second Life seems to have in the mainstream media is justified?

No, and it never has been. The pearl-clutching about “all the sex stuff” is ridiculous. There’s plenty of “sex stuff” in real life, and since SL is an alternate life… are we supposed to live like monks and nuns? Utter bullshit, and I’m calling it.

As for the other thing that SL residents are so sick  of hearing—why don’t you get a REAL life?—well we all have one of those as well. Given a choice between spending £50 inworld (an amount that will give me at least a whole month of enjoyment and pleasure, and sometimes longer) where I can be with my best friend and have a lot of fun, and spending £50 on a single night out (and, with prices the way they are these days, that’s scrimping) I know where I’d rather my money went. I explain to people that, just as they like to spend their money on those things, I like to spend mine in a virtual world.

“But you pay for things that don’t exist!” they say. “You don’t actually have them.”

“You pay for beer that you piss down the toilet within a couple of hours,” I tell them. “You pay for cigarettes that you set fire to. Those are just as transient as virtual goods.”

“But I enjoy the cigarettes and booze,” is usually the response to that.

“And you think I don’t enjoy time spent in a virtual world?”

They just can’t get their heads around it.

Back to the homes. The place I spend most of my time now is our Steampunk Tower, also in Jindalrae. I love warm autumnal tones, and I love steampunk. I’ve picked up little bits and pieces over the years that I’ve furnished this place with. We always spend Christmas here, and I deck it out with a tree, cards, lights; the works. 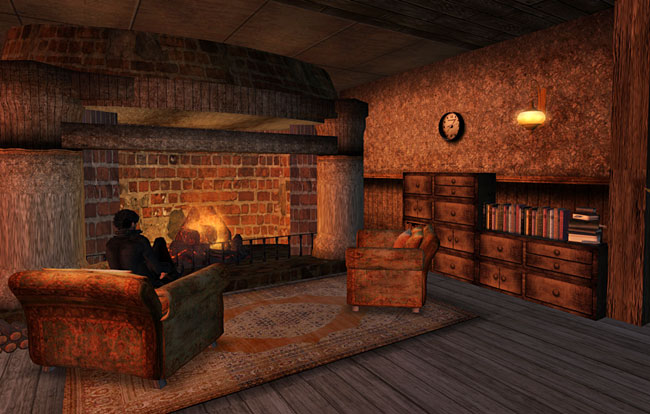 I sit and write here, too. 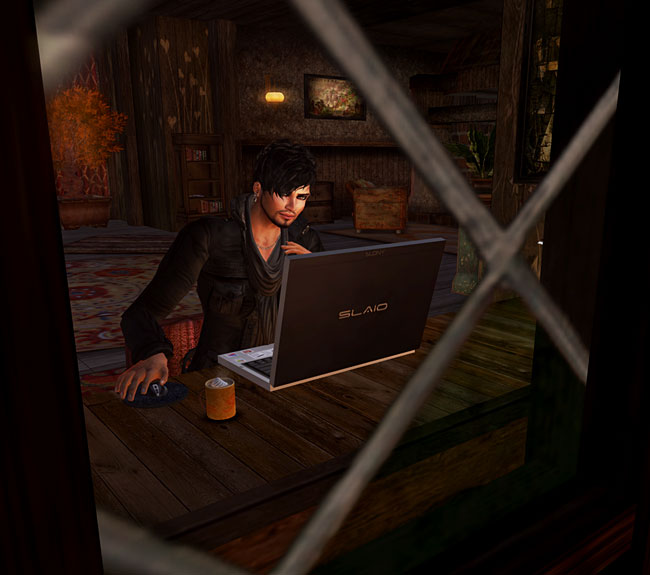 And this is what makes it really home for me. 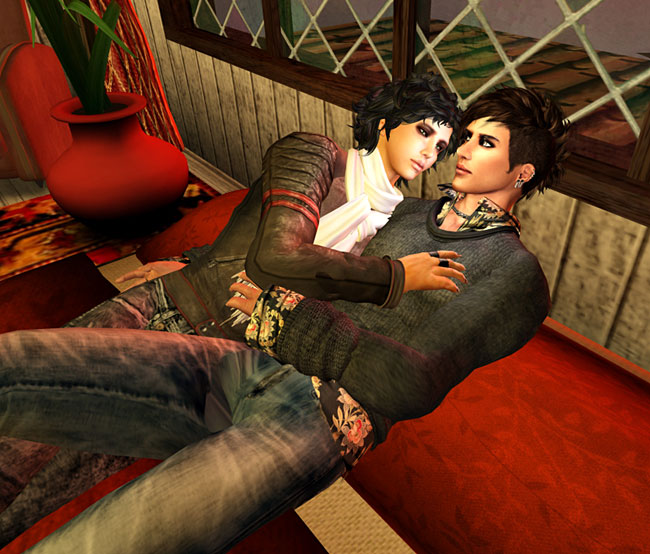 Our other plot is in Star: a waterfront plot that looks out over the Sutherland Dam area. It’s one of only six (I believe) deep water regions in SL, going down 80 metres. We have homes on the ground, below the water, up in the sky (my vacation hacienda is up there), and a large dock house actually in  the water. This was the first underwater home I built there, some time back in 2007/8. 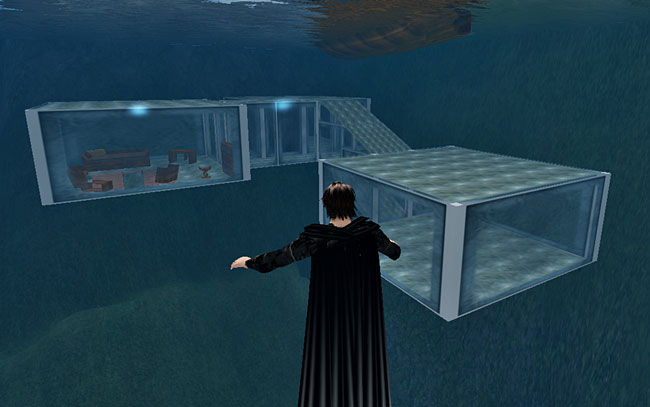 And this is the dock house. Again with the steampunk ;-) 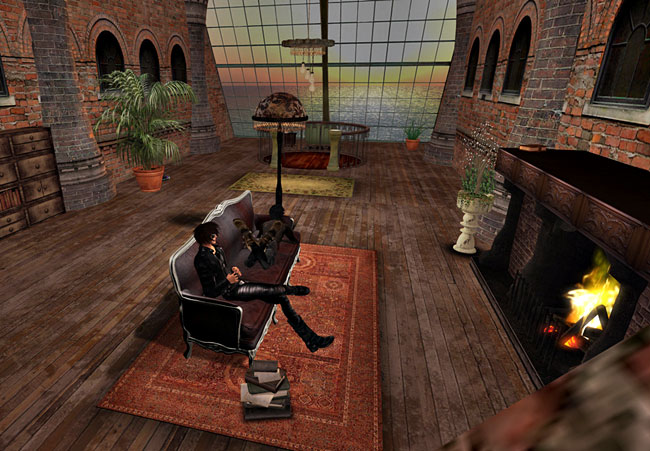 Do you talk about your Second Life with your real life friends and family?

I’m not shy about it, and I’ll mention it if something is relevant to it in a conversation I’m part of. My mum doesn’t understand it (I told her I’d planted a beautiful garden in SL and she just said, “Why don’t you just work in your real garden?” Well, Mum, I do! I just like virtual gardening, too. No slugs, weeds, etc…)

As before, if I’m talking to a gamer then I usually get a better response than I do from someone whose idea of “gaming” is playing Candy Crush Soda Saga on their phone.

Let’s move on to some of my favourite places and old hangouts in SL, apart from “wherever Daros is.” Many of them are long-gone, because I’ve found that the places I’ve loved best didn’t make enough money to stay open. As much as SL is a place for creativity, if that creativity isn’t financially rewarded then it struggles to last. It’s a bitter irony, when you think about it.

We’ll begin with the first place that knocked my virtual socks off; somewhere I used to teleport to just to be  there and listen to the sounds around me: Airship Outpost. This was a ragtag bunch of shops high in the air, held aloft by rotors, giant blimps, steam vents, and the occasional rocket. 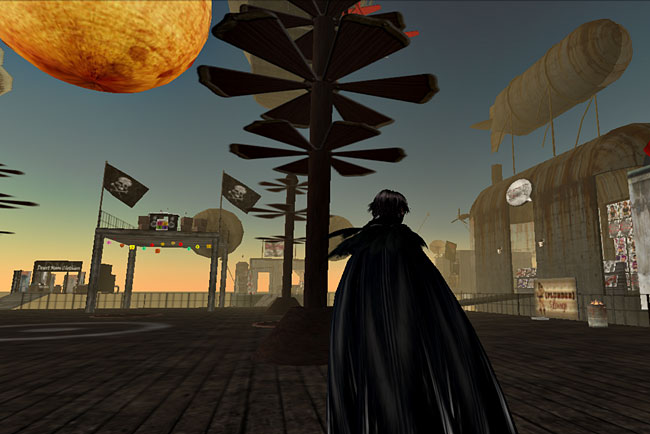 The second place where I spent a long time (and where I came into my love of always walking around places whenever I could, as opposed to flying or taking teleport boards) – The Block. This was an urban shopping sim, and it was the first place I came across that actually looked like a real city block. This was where my love of fashion shopping in SL took form. I bought from Mechanism, FORM, and Sinistyle (my first big SL purchase was L$650 or so on a long leather coat from there. I dithered for ages, then thought “fuck it” and hit ‘buy’).

Alchemy Immortalis, Empress & Heirophant, Ceangeal. Oh man, I spent so many hours just standing on those beautiful windswept hillsides and wandering around like Cathy from Wuthering Heights. I loved those sims so damn much. 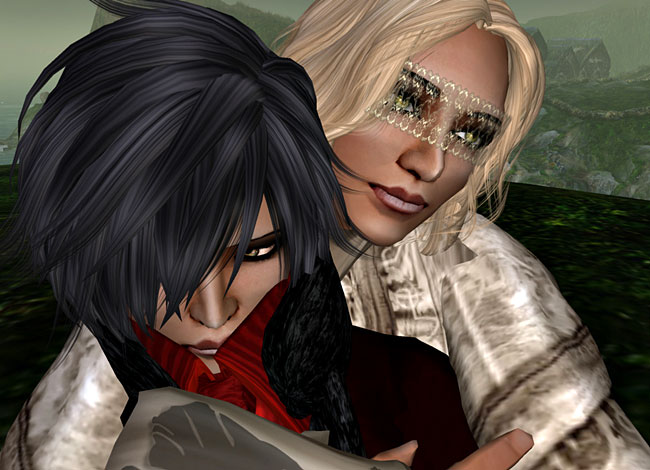 What is your most favorite thing to do in Second Life?

I don’t really have a favourite thing, but I love it when I get into the flow of creating something and before I know it, hours have flown past. If Daros is online, then I love to sit with him while we chat about everything under the sun. And, of course, I love dressing up my Skelly pixel dolly ;-)

Another place that Daros and I used to go to a bit: the Forum Cartel Hangout. I believe it’s still there, but we stopped going a long time ago. It was formed by some regulars on the old forums and was a general place to go and sit and chat. If you were online alone and popped in there, it wouldn’t be long before someone spotted you on the HUD that all members had to show them someone was there, and you didn’t stay alone for long. They threw some great bashes at celebratory times. This shot was taken during a Halloween party. 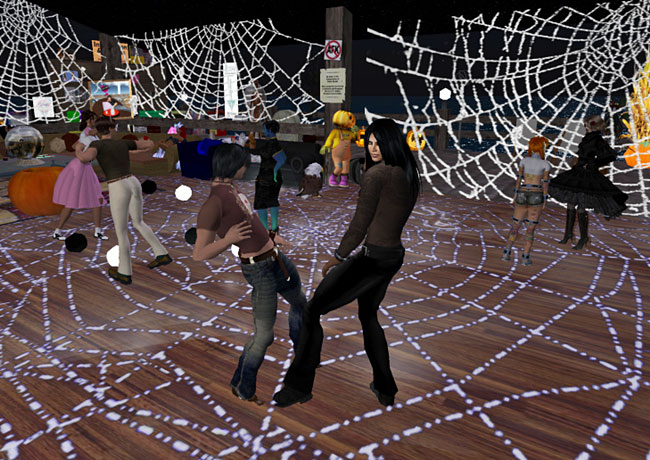 But they do say that home is where the heart is, and my heart rests in that little safehouse back in Jindalrae :-) 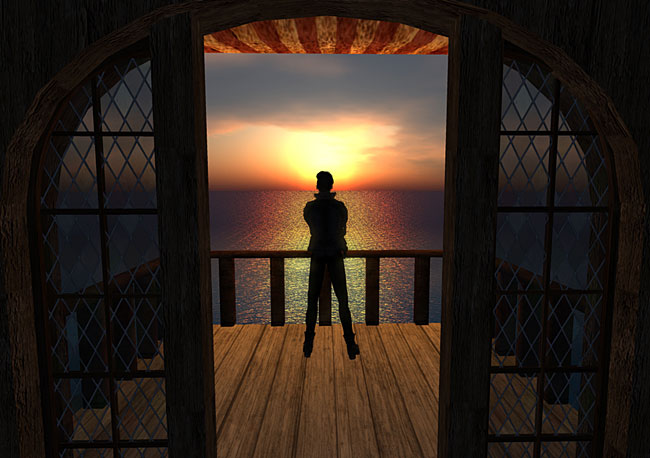 And I’ll build a home for you, for me…

2 thoughts on “To build a home”