And you sway in the mood the way you did when you were younger.
When you told everybody, “All we need is now.”
Stay with the music, let it play a little longer.
You don’t need anybody; all you need is now. 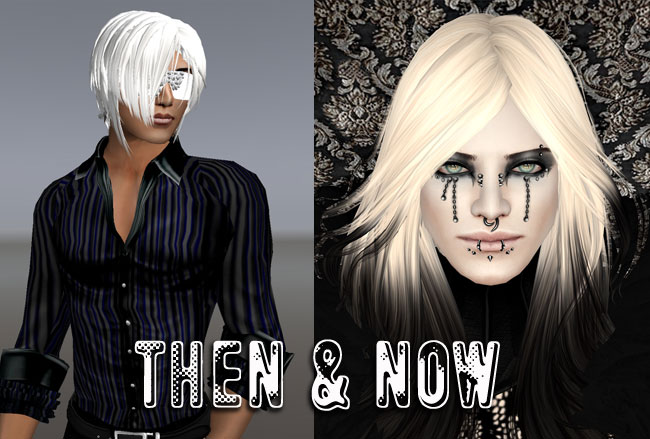 This week’s Monday Meme is an interesting one, but I had to dig a bit deeper for it. Berry is asking us to compare our first blog photo with a more recent one. But, considering my first blog photos were these two— 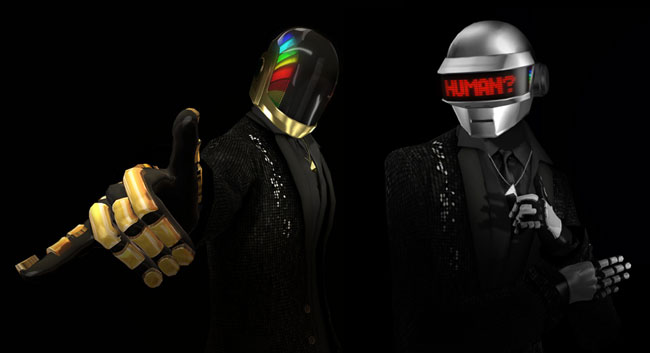 —that, uh, isn’t very representative of much. ;-) Nor is it representative of when I started taking serious fashion shots, since I’ve only been blogging for about two years and I got into SL fashion about six years ago.

So I decided to hit up the one place where I’ve been plunking my fashion stuff since 2008 (well, the fashion stuff began in 2009) and that is Flickr.

Meme instructions: Share a side by side comparison of your first blog picture beside a recent picture of your avatar. Don’t forget to share the link to your image in the comments and add your pictures to the Blog Memes flickr group.

So here we go delving back to 9th March 2009 with what was arguably my first attempt at a ‘proper’ fashion shot. 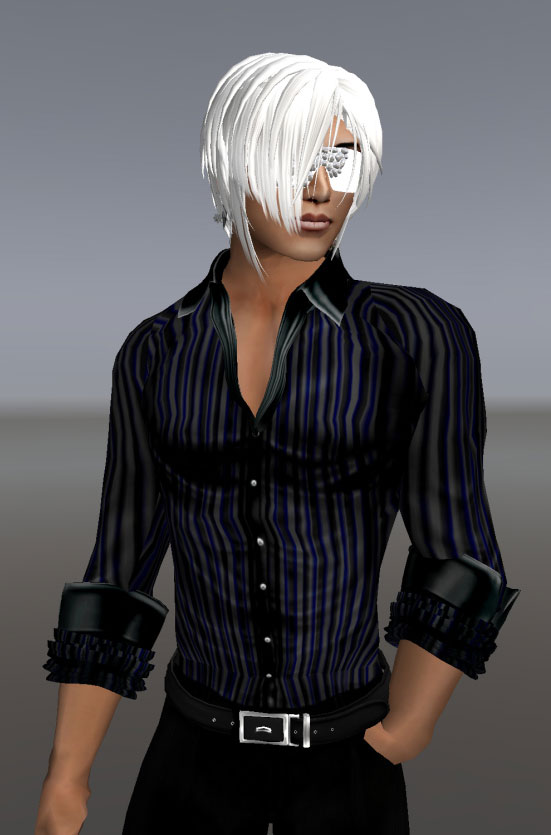 I’d just discovered Aoharu (that’s where the shirt was from), and those Gaga ‘Fame’ shades that everyone was wearing at the time. I was living pretty much in my Excess skin and hair at that time (you’ll note that—if you follow me on Flickr—my user icon has always had white hair. That’s a relic from the days when my hair colours were either jet black or pure white). Back then we already had sculpts (note the collar and cuffs of the shirt, as well as the belt) and I was shopping at places like Armidi, Agrace, Aoharu, Aitui (all the As!), Meriken, Truth (remember when he also made clothing?!), and Redgrave.

Fast-forwarding to a similarly-stylish look that’s more recent, and well… it’s clear that mesh has had a big impact on fashion. This look was actually pretty simple: the suit was a one-piece from Gabriel. But it was those epaulettes that I added in a fit of madness that completely made  it. So I guess you could say I’ve got a lot  more inventive in my fashion choices in recent years. Mesh has actually aided me there, because—as the amount of mesh male clothing that interests me is dwindling, and all I can do is sigh wistfully at all the great stuff for the girls that I know I could never wear, because y’know, built-in tits and all that—I’m leaning more and more toward interesting accessories that I can do crazy things with to spice up an outfit. 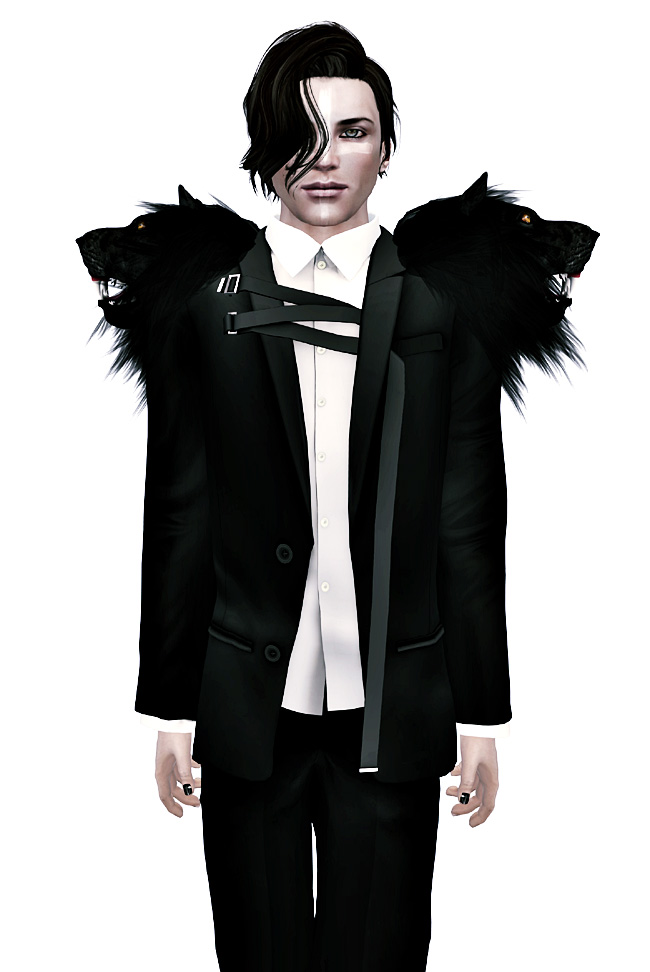 But there are several sides to Skell and his fashion choices, and the androgyne look is never far behind anything he does. This is an early andro look from 20th August 2009: 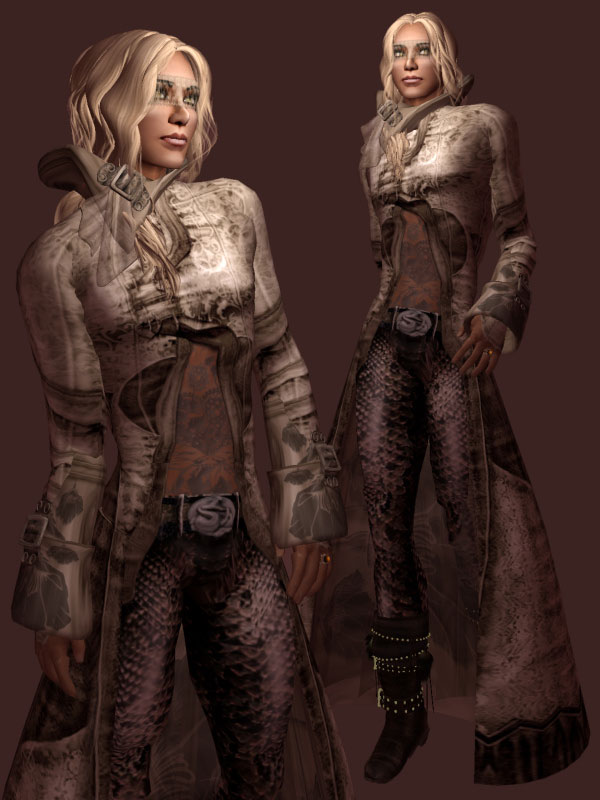 Yep, that’s Maitreya female hair. I still wear it to this day, along with several other Maitreya styles I bought back then. The coat was by LeeZu! and I made the golden lace eye veil myself.

And moving forward? This is a very recent androgyne look: 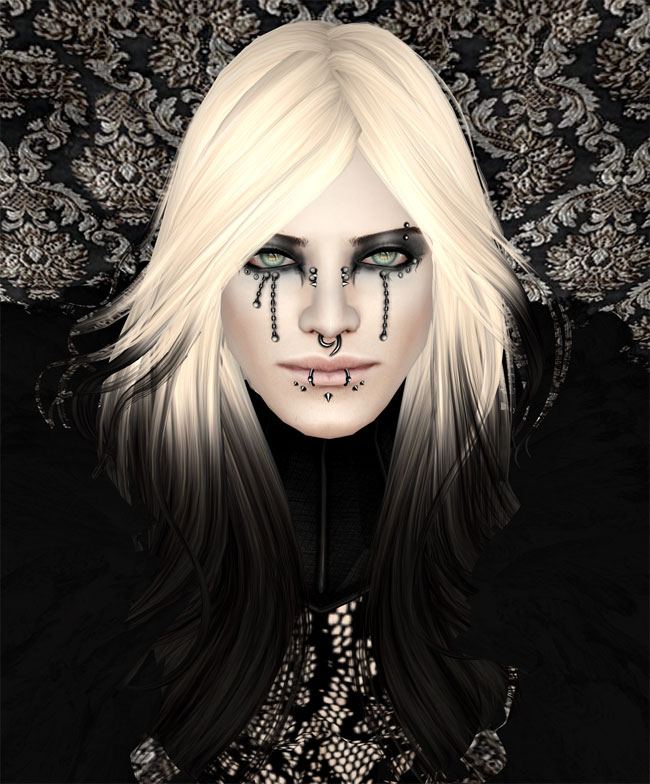 Yeah, that’s an all-in-one black lace catsuit with a floufy feather coat over the top of it. Bonus heels underneath. When I glam it, I really  fucking glam it, my sartorial darlings ;-) 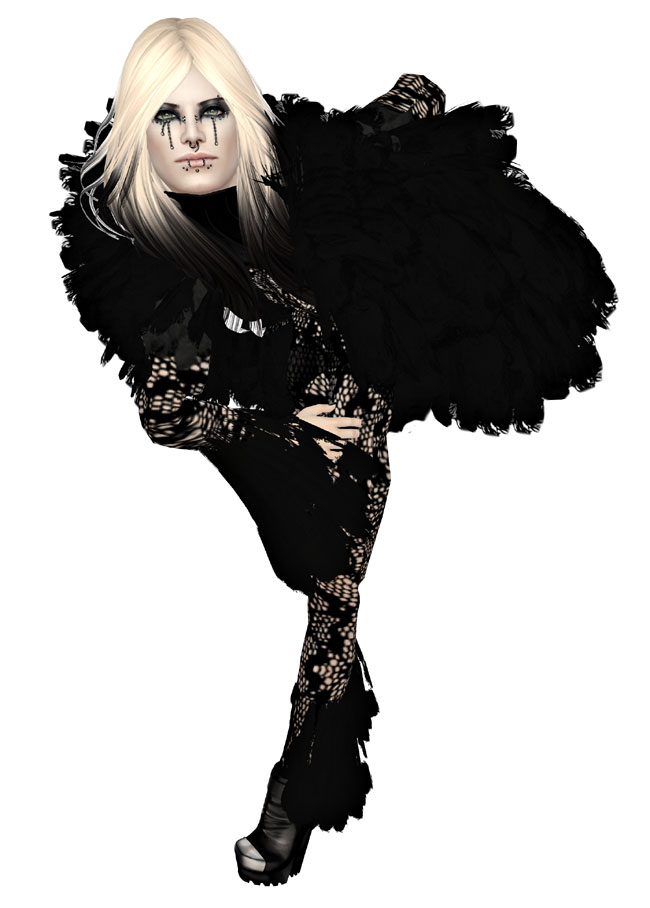 So, how have I grown as a blogger? Or, rather, as a fashionisto? I take far more risks than I used to, that’s the main thing. Once upon a time Skell’s fashion was stylish, yes, but also kinda… boring. I sometimes ask myself: was that because of what was out there back then? Because I did occasionally manage to find brilliant things, and when I did you can bet your life I finagled them into fashion looks. Here are a few examples of those early flutters of inspiration:

April 2009 I found this (free!) knitted clothing layer cardigan in the Demise stall at some large event or other. I nabbed it and, since I already had those shoes, I shoved a casual look together around it—

Who remembers the Dany French Touch store, with its exquisite  texturing? Now long-gone, I still miss that place. I picked up this suit and built a whole Dandy Highwayman look around it, also in April 2009—

(See what I mean about the white hair back then?)

In roughly 2010 I discovered Sey, and I must have lived in this look for several weeks after that— 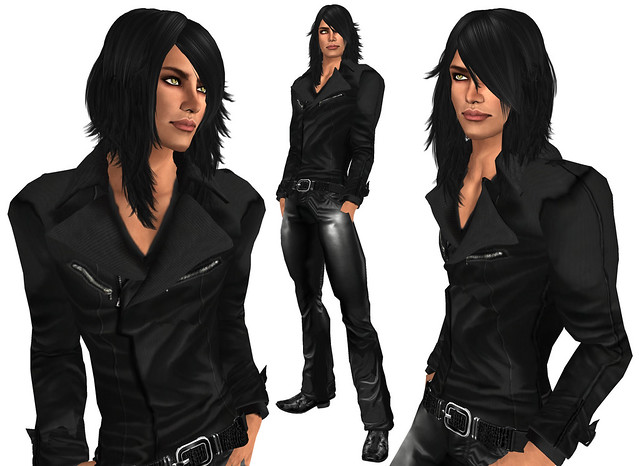 Hippying the hell out in a fab L$10 pair of pants from Sn@tch that inspired this Woodstockian look in early 2011. I still love those pants— 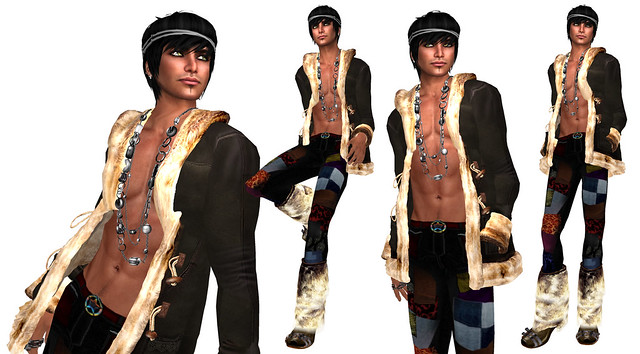 Noticing something with most of these? Yeah, I’ve always white-backgrounded, and I still often do. It’s the best way to show off the clothing, rather than what I can do with Photoshop. I’m not knocking you Photoshoppers by any means, but I’d rather spend time on the look than in the graphics program.

March 2011, Skell downloads the Phoenix viewer and discovers multiple attachment points and makeup layers. WHEEEEEEEEEEE! *ahem* This pic was the start of my utter addiction  to SL fashion. I think there are something like three belts and two necklaces in that picture alone—

That was also before I hit the sliders and skinnied down a bit. I had thighs like hams back then ;-)

And soon after that there was this, inspired by Mother Monster’s Judas  song— 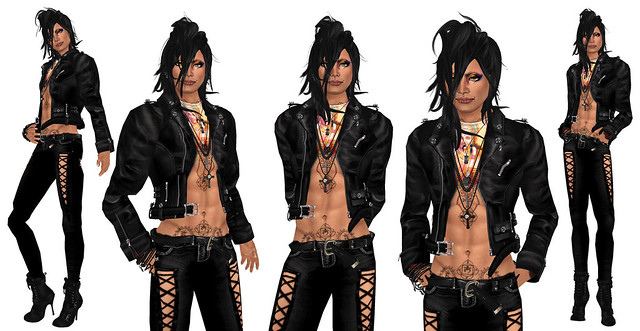 And this. Prim lashes, baby—

Yeah, I went kinda nuts. I love this shit; can’t you tell? 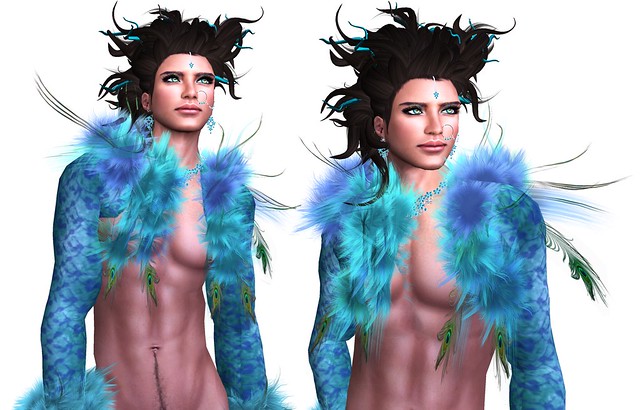 That was all the joy of clothing layers. I can’t do half as much of this now with mesh *sadface*

Anyway, let’s move into the next year and see how things progress…

2012 and mesh hit the grid. I got my first mesh hair and attended Menswear Fashion Week. Oh boy, did my wallet learn to cringe every MWFW thereafter- 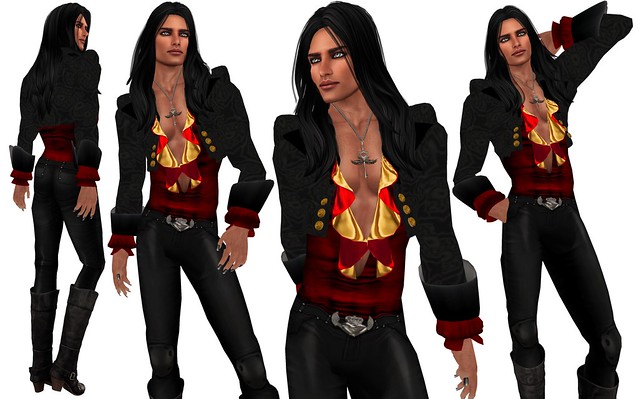 Late 2012 and I finally had a computer that could handle shadows. Shadows and mesh, oh my god. Playtime just got a helluva lot more fun! 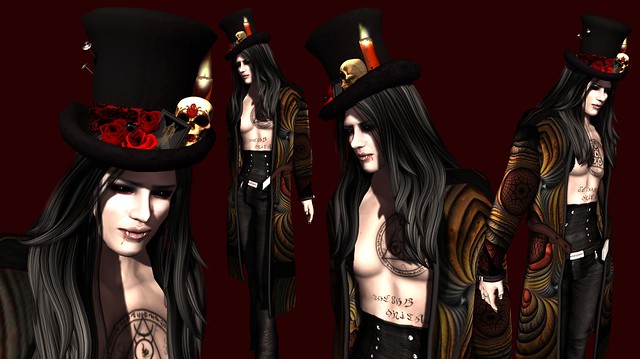 2014 and I’m shooting in the open skybox that I still use to this day. I started to pull away from the white backgrounds around here, but I’m moving back to them again of late. 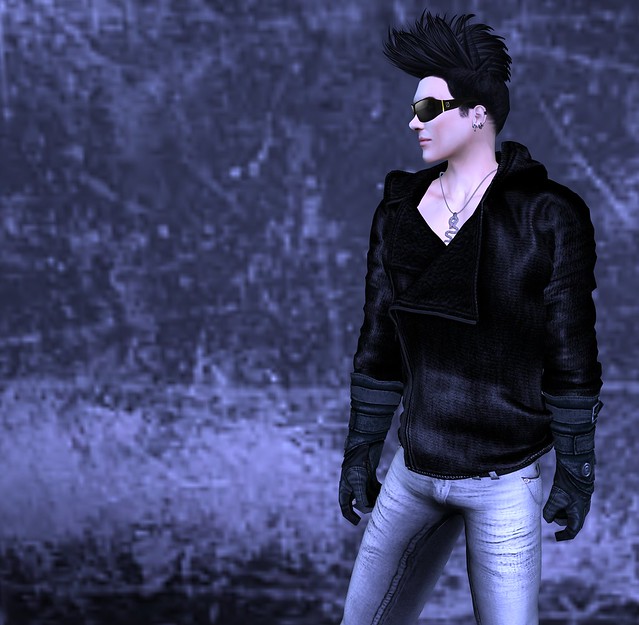 Occasionally I’ll set up an entire background, as I did for this shoot— 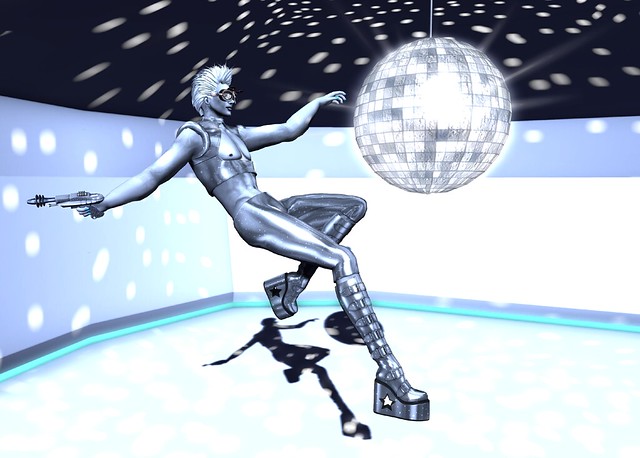 At the end of 2014 I was back to the white backgrounds. I’m still not quite sure why this is my most-viewed picture ever, with almost 800 views. This outfit just came together in minutes. Strange; the stuff that takes us hours can glean very little attention, but the stuff that falls into place with no effort at all is what gets the clicks and pink stars on Flickr—

And now? Now we’re here, with two pictures taken from my recent blog posts for Futurewave— 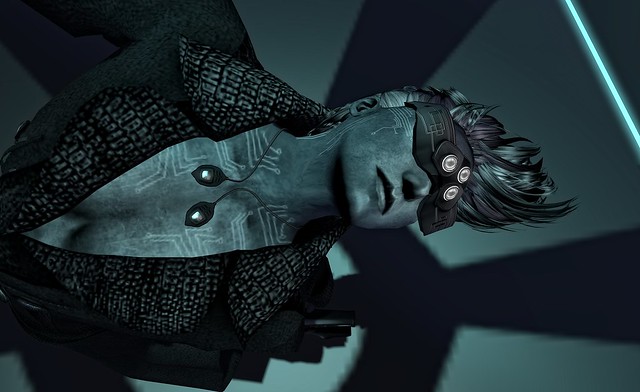 And this shot, again from a Futurewave post. It was shot entirely on location at our new HASRA roleplay sim, and I wove a whole story around it. It’s still one of my favourite blog posts and photoshoots that I’ve ever done. You can read it here :-) 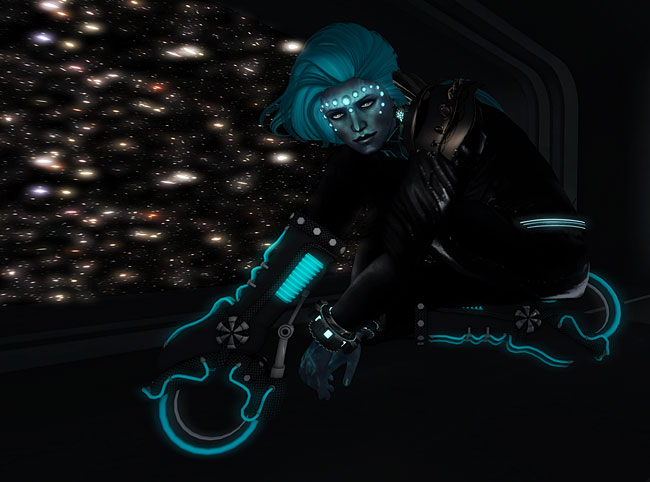 I’m not even going to think about offering a credits list, because seriously O.o However, if there’s anything you’re curious about, drop me a comment and I’ll try to dig out what it was and where I got it from.

Edited to add: What might be a fun challenge is to see just how much my own photography skills (as well as the new abilities we have with the viewer, such as shadows etc) would change those earlier looks. It might be fun to wear those old outfits again and re-shoot them, just to see how different are now.