Nope, and you never will again! (Not if Skell has anything to do with it, anyway.)

I couldn’t get out of doing this week’s Monday Meme, my sartorial darlings, because I was the one who suggested it!

Meme instructions: Transform your avatar completely so that even your friends wouldn’t recognize you. Don’t forget to share the link to your image in the comments and add your pictures to the Blog Memes flickr group.

My original suggestion for this meme also had a secondary rule: You’re not allowed to change gender or species. Y’know, because I couldn’t make things too easy, right? The immediate thing most people would think of would be to switch to their opposite gender (assuming their avatar presents a binary gender in the first place). The second thing people might try is a complete change of species (thus a furry might become human, or vice-versa). The challenge is to change yourself completely within your usual gender and species limits.

I’ll admit I did feel somewhat for poor Deoridhe Quandry (who I probably put very much IN a quandary!) but c’mon, lil’ faerie lass; you can think of something awesome! ;-)

As for me. Well… this was Skell’s reaction to what I did: 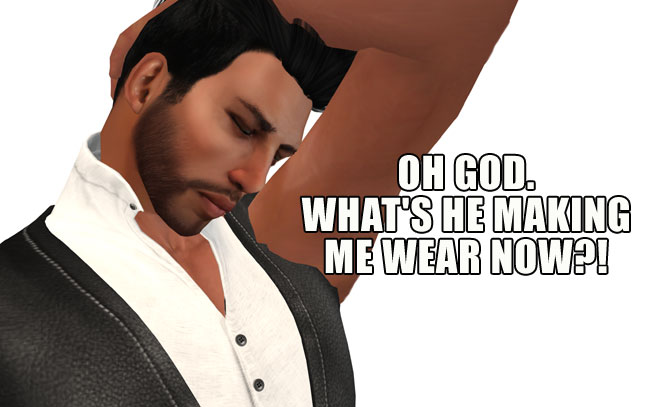 Okay, well the avatar itself was easy. I picked up this full Lee Avatar  by TELLAQ at January’s Mens Dept. I got it mainly for the skins included (five, in total) but it also came with a shape and a suit. So I shoved Skell into the shape and skin #5, and he was okay with that.

See? He looks happy as a little fluffy spring lamb!

Moving on! Skell’s hair is the Revolver  style, by Exile (hairbase also to match from Exile). And his eyes are the chocolate shade from IKON’s new Charm Eyes  range.

Well, you kind of needed to be wearing something nobody would ever recognise you in, lad! Something you would NEVER wear! Y’know; if anyone who reads this blog regularly saw you across a crowded room wearing that, they’d never in a million years think, “Oh, there’s Skell!”

So I, uh, well I had this outfit from Gizza sitting here. And, while it’s a great outfit in and of itself, it’s really not something you’d ever be seen dead in. Is it?

Oh c’mon. Don’t be like that! It’s only a pair of baggy pants! I know you hate dropcrotch pants with the passion of a thousand fiery suns, but you don’t really  look like you’ve crapped yourself, y’know. C’mon, just give me one nice pose for the screenshot here. *pleading smile*

Yes! Yes! Anything! Makeup and rhinestones it is. Thanks, Skell! You’re a brick! *kisses* 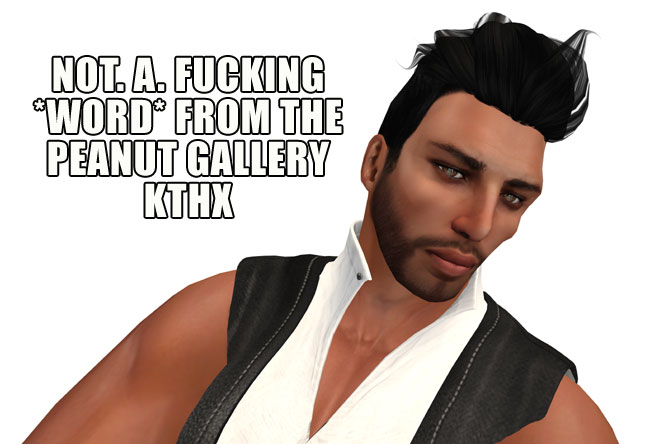 2 thoughts on “Have you seen this man?”