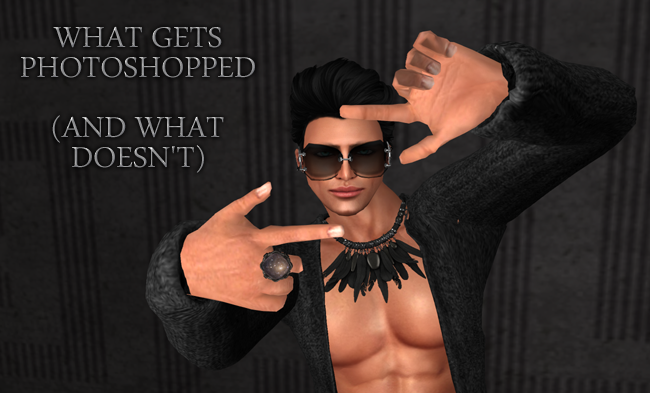 Let’s get it out there: I’m a vain bastard, okay? I like to look good (I wouldn’t have a 150K inventory otherwise) and I want to look good here. However, there’s one thing you won’t find on this blog, and that’s Photoshoppery out the fucking wazoo.

There are some awesome blogs out there; ones that focus as much on the graphic design talents of their owners as they do on the items (regardless of what they are) that are being featured. Some blogs are true works of art, and I adore those blogs… for being works of art. Hell, I love beauty (look at my boyfriend!) and I have a strongly-developed aesthetic sense.

What I also have, though, is a strongly-developed sense of honesty. And no, I’m not saying those Photoshopped blogs are dishonest; rather I’m saying that – like most of you – I’ve seen an item featured in a beautiful blog post and purchased it, only to be slightly underwhelmed because it looks nothing like the way it looked on the blog. It’s happened to me – and probably to you – rather a lot.

What I hope to give you in this blog is what stuff actually looks like. I’m no Photoshop expert. I dabble a bit, but I have nowhere near the skills of some of the top bloggers who can smooth and liquify until their avatar looks almost real. There are some things that I will edit, and some things that I won’t. This post will show you exactly what those things are, and what you can expect from me when I come across those things that aren’t quite as they seem.

What WILL get Photoshopped

1. Thumb spikes and all the assorted monstrosities of the male avatar mesh around the hand and wrist

I can remember the day when the thumb spikes appeared. I’d just bought my first rezday gift to myself back in 2008: a new skin. I put it on, and suddenly these horrible points appeared on my thumbs. Now, whether I’d simply not noticed them before, I can’t say. But they were damned obvious at that moment; to the point that I thought something was wrong with the skin! These will always be edited out, as they’re an ugly fault in the avatar mesh itself.

NOTE: When I mention ‘avatar mesh’ here, I mean the base avatar that we all have, not an avatar that’s made from mesh (as in: a purchased mesh avatar)

Addendum: Since I now almost exclusively wear Slink hands, this is no longer an issue. However, in older posts (and in my pre-Slink-hands Flickr images) these edits were made.

Dear God, how I hate nose triangles. Again, it’s an avatar mesh issue. These will always be smoothed out, with one exception: if the post is about a featured skin, I will include a raw shot to show the skin with nose triangles. The reason for this is that some skins handle them better than others. Whether nose triangles are a ‘feature’ of my shape or not (and I know quite a few other people who suffer with them) I don’t know, but for those that do have them, you’ll get to see them on featured skins. 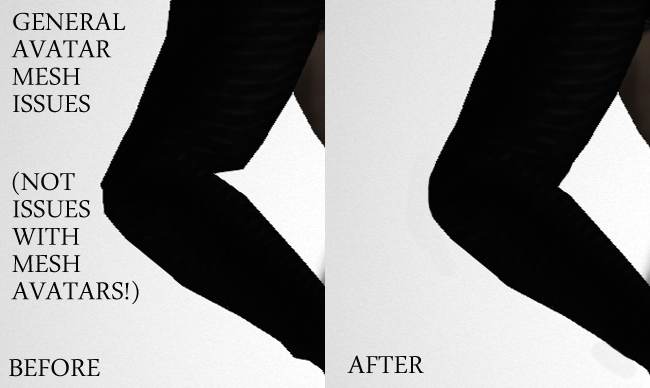 Let’s face it: the SL avatar mesh is far from perfect. It’s very old, it has a lot of faults. How many vertices do we have in the crotch? ONE! (Which is why so many pants and underpants layer items ‘streak’ down the insides of our thighs).

The male avatar mesh can be particularly unforgiving. Pointy butt. Severe stretching of textures across the shoulders. A horrible lump behind the shoulderblade in arms-up poses. Weird points and dents in the elbows with anything but the slimmest biceps (shown above). Random points and angles.

These, and other avatar mesh issues, such as knee breakage (go into a deep kneeling position and watch your shins poke through your thighs – ouch!) will be Photoshopped, for aesthetic reasons.

Addendum: This no longer works in any viewer, sadly.

Again, this is mainly avatar mesh-related. Sometimes, no matter what you do, the avatar mesh projects ugly spiky shadows instead of smooth ones. Again, these will be edited for aesthetic reasons. 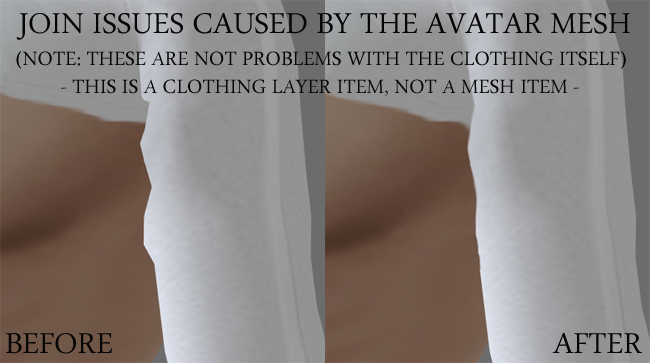 These occur primarily around the inner arms, as seen above. That’s a clothing layer item, and – since I’m not going to blog only mesh items here – I’ll be using these quite a lot. These issues are not a fault of the clothing; they’re a fault in the avatar mesh, and will be edited for aesthetic reasons.

6: Bits of me that poke through (when it’s not the fault of bad mesh or alpha layers)

Believe me, if an alpha layer that comes with mesh clothing is crap, I will tell you. I’m not going to bitch about it; I’m going to just let you know that it ain’t perfect, and you can make up your own mind as to whether the clothing is worth the risk.

In the case shown above, it was the pose that made a tiny bit of Skell’s shoulder poke through (the avatar mesh broke). This (and when I simply cannot edit Skell’s shape to fit an item – which will also be mentioned) are the only times I will edit out bleed-through like this.

What WON’T get Photoshopped 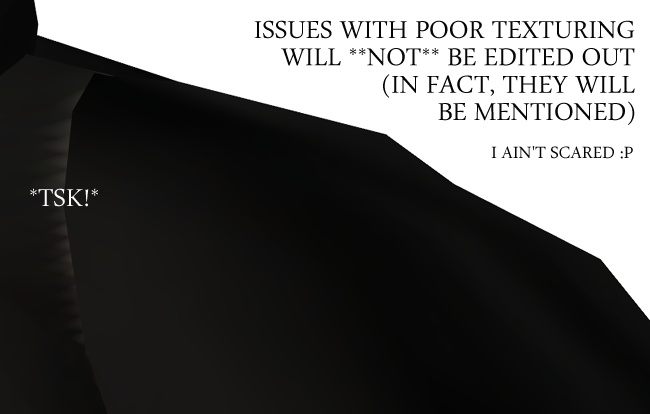 To be honest, I don’t have a lot of bad clothing, mainly because I throw it out if it’s too horrendous to be worn. However, sometimes there are items that I really do love, but they have a few minor issues. In the interest of transparency and honesty (and because, like me, there are some of you out there that are willing to overlook minor issues for a fabulous item of clothing *g*) I will mention these so you can make up your own mind.

These will include: texturing where the seams are incomplete or obviously don’t meet (and seriously, I know how hard it is to match seams, so I’m not going to bitch about silly little imperfections; only the stuff that is noticeable), and items that are stuck together and No Mod (such as a jacket with an attached, non-removeable shirt).

Other things I’ll mention include, but are not limited to:

I’m not out to be a complete bitch here, nor am I out to piss off designers. I just want to tell it like it is. And hey, I’m English, so even when I’m bitchin’ I’m usually polite about it ;-)