Or, at least, that’s the kind of proud exclamation on the badges/pins sported by the oversized birthday cards my grandparents always sent me when I was a wee Skelly. Well, technically, Virtual Bloke should have been wearing that badge yesterday, but since I’ve been sick as hell this past week I missed The Big Day by one day. So Happy *airkiss* Belated *airkiss* Birthday, dear blog.

I knew this anniversary was coming up, and likewise I knew I’d have to Do Something Special for said anniversary. But could I think of anything special? Could I bollocks :-/ I’ve been somewhat silent here of late anyway, but still fairly active on Flickr. Life’s been a busy thing, my health isn’t exactly the greatest right now (and yeah, you don’t want to hear me bitchin’ and moaning about that anyway) and so SL fashion has taken a little bit of a backseat for a while.

When I log in these days much of my time is taken up helping in the Catwa support group, since Catwa herself very graciously offered me the opportunity to become one of the CSRs for her store thanks to all the help I’d already been giving in-group. It’s a rewarding job, since—as regular readers here will know—helping guys to look good in SL is a passion of mine, and while I help out all genders in the group I tend to specialise in helping the pixel menfolk out there sort out issues with their Catwa heads and get themselves looking great. But, unless I close the group chat and actively push myself to ‘take a day off’ from it (there are no set working hours as a Catwa CSR—I can come and go as I please—but there is  me and my damnable wish to help people all the time!) I often don’t get anything ‘fashion-y’ done because all of my attention is going either to group chat or IMs where I’m helping someone one-on-one.

That said, one thing that I have  managed to do in the last couple of months is the thing that gave rise to the slightly head-tilting title of this post: The Androgyne Compromise. 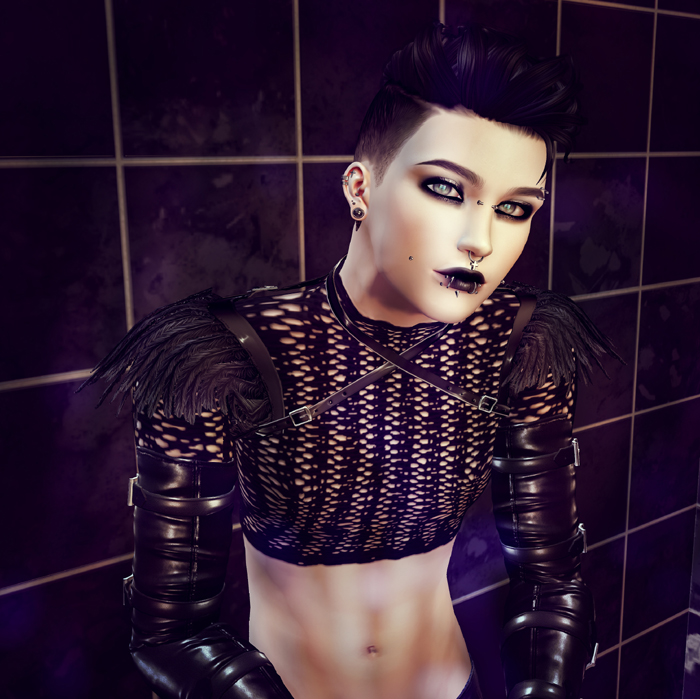 Syd joins the ranks of my alternate personas (not alternate accounts; they’re all Skell himself but with different base looks) alongside others such as The Rocker and The Gentleman Bastard. Syd has finally given me the chance for full-on, in-yer-face androgyny in Second Life again, replete with heels and a faceful of slap… but he comes at a price. And that price is the ‘compromise’ part of the title.

Syd gives all that glorious genderfluidity back to me, but he cannot do that with my original shape. You see my kind of androgyny is Skell’s usual very male shape—broad shoulders, long and lean swimmer’s torso, slim hips, and giraffe legs—topped by a beautiful face. But because of the way that Syd is created he has, by default, a smaller and more bishōnen shape. Without completely Frankenmeshing your avatar and disguising where heads, waists, and necks don’t meet, and shooting images from specific angles only, it’s nigh-on impossible to create multiple looks using a male mesh body and a female mesh head. Yes, there are ‘unisex’ heads (Catwa has three of them, for example) but those are all female (and very femme-looking) heads that also contain one male neck fit option.

And when I say Frankenmesh I really mean it. I know of one well-known androgynous blogger out there who has worn multiple mesh bodies and alpha’d out sections of them, so he could have the lower half of Maitreya Lara (for the heels and some amazing pants) and the upper half of, say, the TMP male body (for the masculinity), and he’s had to hide the very obvious mismatch at the waist with clothing. That’s a fantastic workaround for photoshoots, but given how resource-heavy mesh bodies and heads are to begin with (remember: each one comprises at least THREE copies of itself, to account for all the layering options) one simply cannot walk around SL wearing two mesh bodies all the time. Your avatar complexity would be through the goddamn roof, and nobody but those on NASA-level computers would see you anyway.

So Syd is my compromise. Since Slink has not brought out a male heeled foot (despite all of the begging and notecards from many of us guys who would love one!) we have no choice but to compromise. And that compromise involves the following:

But hey… HEELS! Not to mention all of those amazingly-hot variants of pants that the ladies get, while us guys are assumed only to want either ripped and/or baggy jeans, or sweatpants.

(Sweatpants. Jesus fucking Christ, don’t get me started ranting about sweatpants, my sartorial darlings. My health is lousy enough as it is right now; I don’t want to add a fucking coronary to the list.)

Anyway, where was I? Oh yes. HEELS! 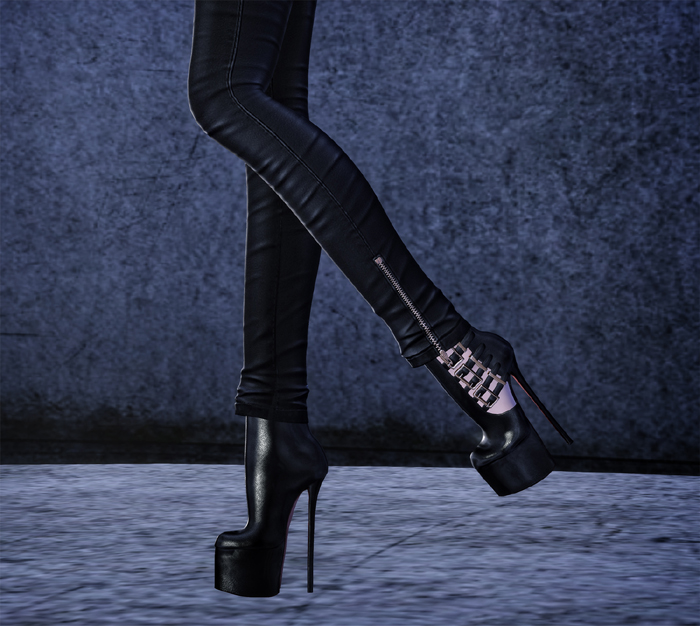 You have no idea how good it feels to be able to wear what I want  to wear (when I’m in the mood to wear it; Syd’s not a permanent persona, after all), after years of seeing thousands of heels that only female avatars can wear. I have a very small handful of ‘these fit guys too’ heels that I’ve been trotting out time and again (and by ‘very small handful’ I literally mean about two or three pairs) and if I’m getting fed up with wearing those all the time, then others must be getting fed up seeing me in them whenever I want to wear a more andro outfit.

That said, I’m going to share those items with you now, in case you’re on the hunt for heels that work with male bodies.

Cubura brought out their Men Boots (Slink, Signature, Adam, TMP) and their Metal Boots (Slink, Signature, Adam). Their Tomas Boots are rigged for Signature and Belleza (male and female) as well as for Maitreya, but the MP ad claims they also fit Slink. Sadly, though, Cubura no longer rigs any of their clothing for Slink, having dropped support for it and moved to only Signature, Belleza Jake, and Maitreya Lara. A lot of Cubura’s clothing items lean toward the cute femboi look (not something I’m into, even if the clothing has black options) but they do have one or two stellar items, such as their Arcangel Shorts, which I’ve worn a lot (although I need to wear Signature body to get into them).

Here’s Skell in both the Men Boots and the Arcangel Shorts from Cubura: 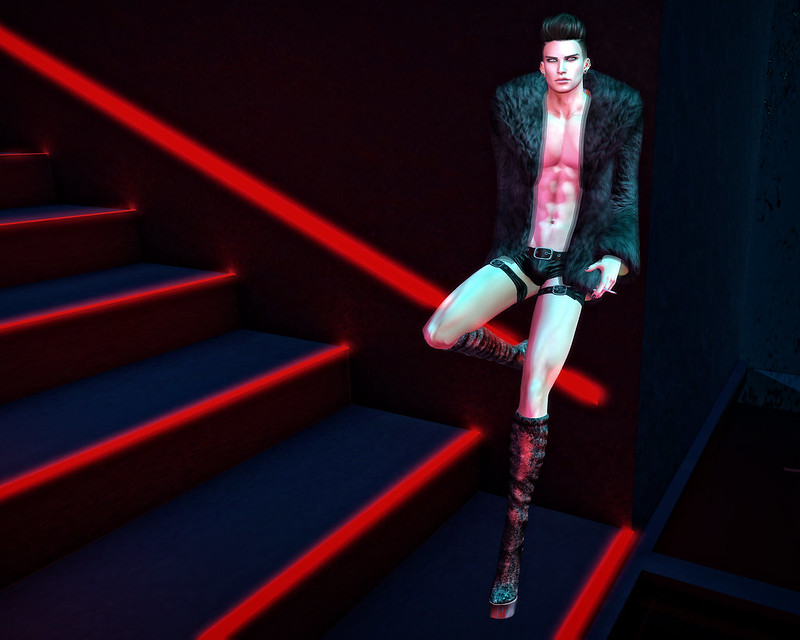 Violetility have their Penta Platforms, which come with long and short ‘stocking’ options. Since these are far more specialised in look they don’t work with everything. They haven’t come out of beta, and there are some small issues at the back of the thigh on the longer versions, but they’re definitely worth getting. 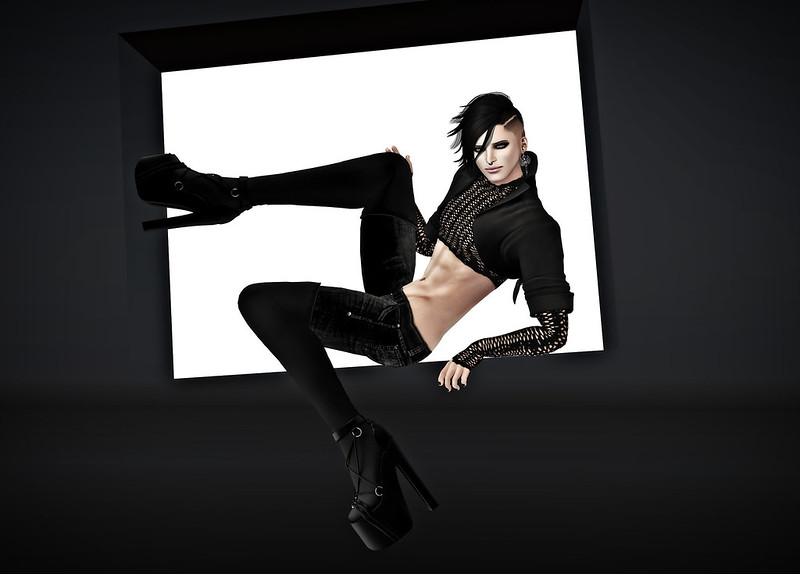 Sadly, other gems are no longer available, such as these hot as hell platform boots sold by Boys To The Bone, which were only sold at Romp! one time (although BTTB do have other unisex items available on their Marketplace store, such as the Tabi Heels). 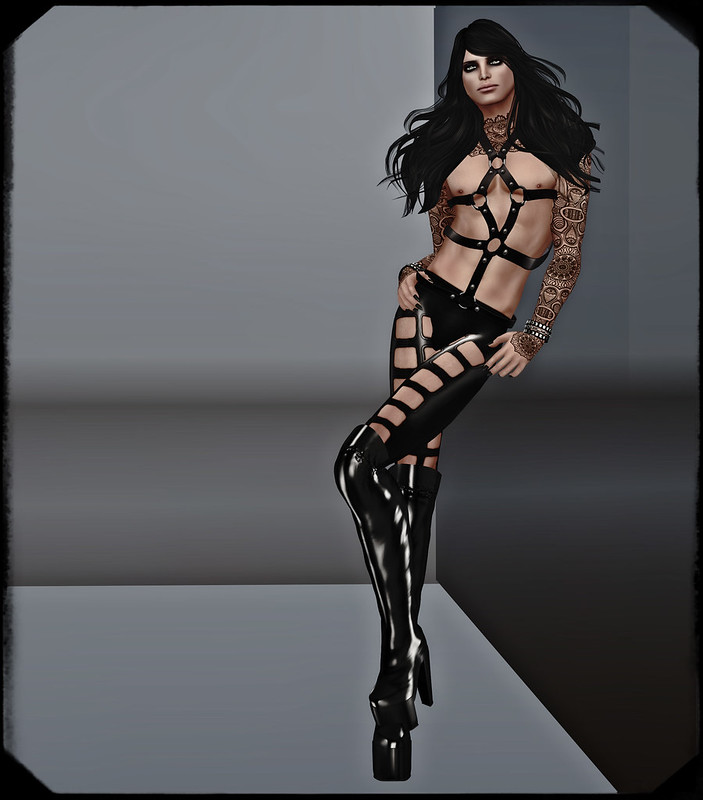 Also, check over Blackburns Marketplace store. They’ve been rigging more for female mesh bodies lately, but their earlier boots (such as these FREE Laced & Strapped Leather Heels, the studded Edda Wedges and Heels at just L$29 each, the Spike Booties at L$49 each, etc.) are sculpted but still look fantastic, they’re modifiable to fit bigger blokey feet, and they’re cheap as hell.

And, finally, RIOT’s fucking amazing  Trixie Heeled Socks for Men, which were out at Shoetopia a while back (and I hope to god are now out at the RIOT mainstore) which allow men to wear female shoes.

Anyway, I guess that’s my Blog Birthday gift to you freaky boys out there: a list of some of the great heeled footwear that guys can wear. So let’s move back to Syd, because he’s threatening to poke my eye out with his mascara brush, the little bitch…

Yeah, you masc old fucker. Give the pretty boy his limelight. 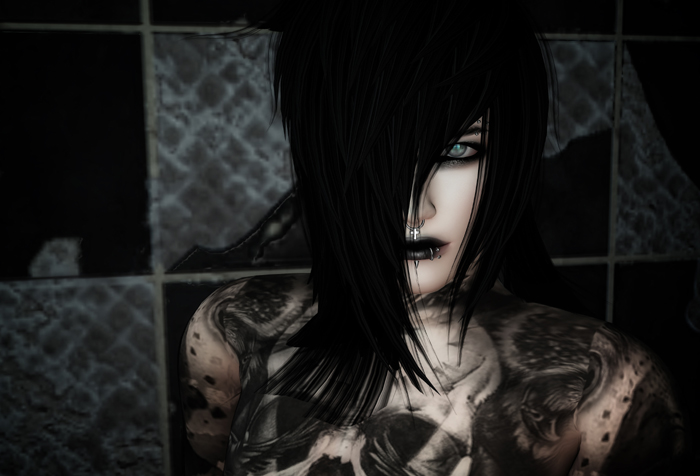 Syd has enabled me to look at my inventory in a whole new light. The hair he’s wearing in the pics above and directly below is an old style from Monster that never really worked 100% to my satisfaction on Skell. I did use it for one look, but it didn’t see the light of day again thereafter. Which is a shame, because it’s a great style. Yes, it’s an old flexi job, but it still looks amazing. 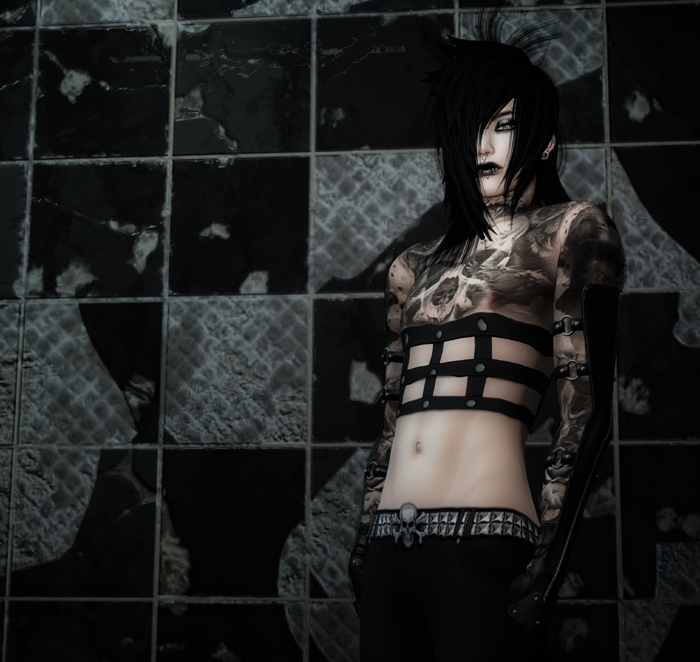 Those strapped gloves for Maitreya were the first things I bought, after spotting them. (Okay, okay. You win. About eight pairs of heels were the first things I bought. But I meant clothing  here, okay? Not footwear!) In fact, those gloves were what sparked off my final decision to at least try  the Maitreya-n-VTech option. However, I didn’t wear them in the first outfit that I put together. Instead, I went hunting for V-Tech compatible clothing, and I came across the Grima Marketplace store. And Syd’s look (and name) were born.

C’mon, he was always going to wear black, but his bitchy, mouthy, punky personality came about because of the clothing options in that store. And his name (in case you hadn’t already guessed) is a bastardisation of one Sid Vicious’s moniker. Now, thanks to Grima, this was his first look: 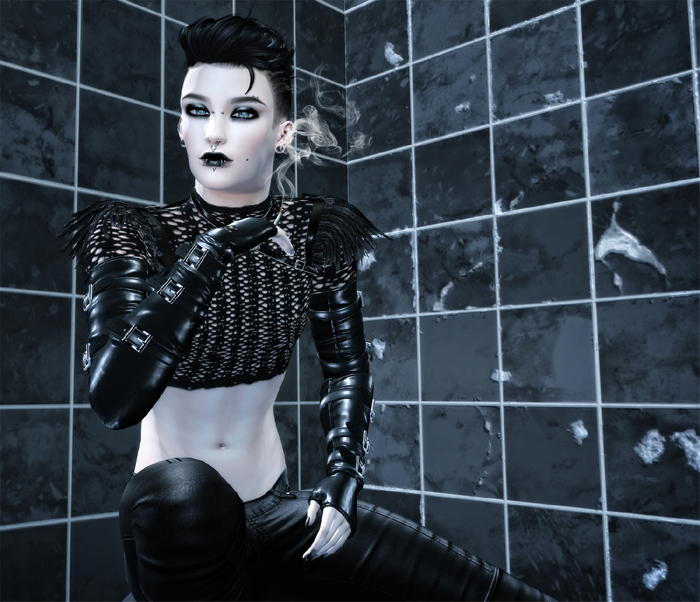 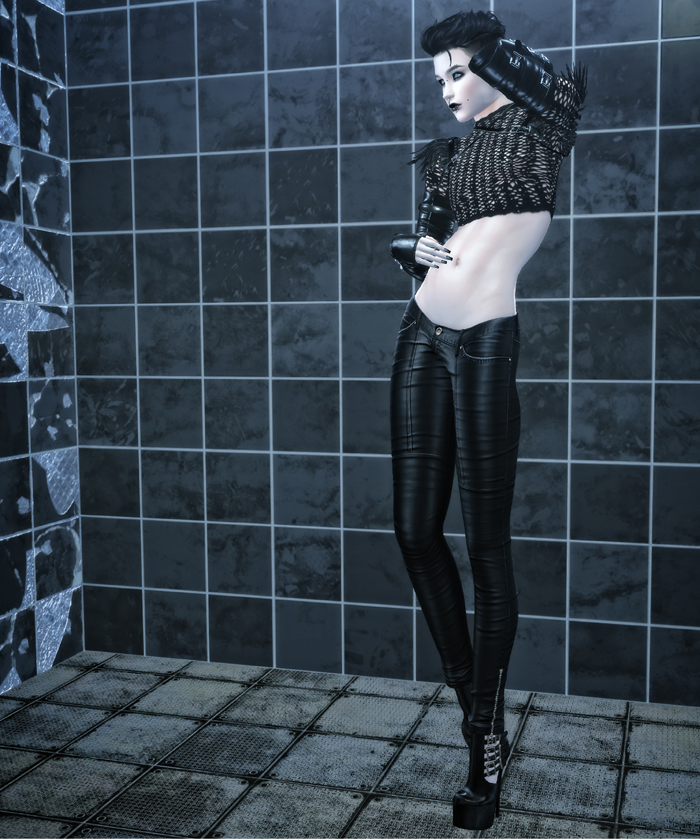 The face took quite a bit of tweaking to get it from feminine to masculine. Syd wears Catwa’s Catya head, which—alongside Catwa’s Sofia head, and her new Eva head—lends itself very well to a more masculine androgynous look, with a bit of slider work. Look for heads that have a more ‘mature’ look to them (‘pixie’ chins will work for the more cute femboi avatars, but if you want the kind of “is that a boy or a girl?” type face, then look for something that starts out looking a bit less… well, ‘girly’, really).

The hips… oh boy, those were a whole other matter. I spent hours tweaking the sliders, going from hips to love handles (the latter being crucial to get right) but I finally landed on something that was slim enough to be male, since the androgyny that I’m aiming for is ‘beautiful man’.

The more I tweaked, the happier I was: 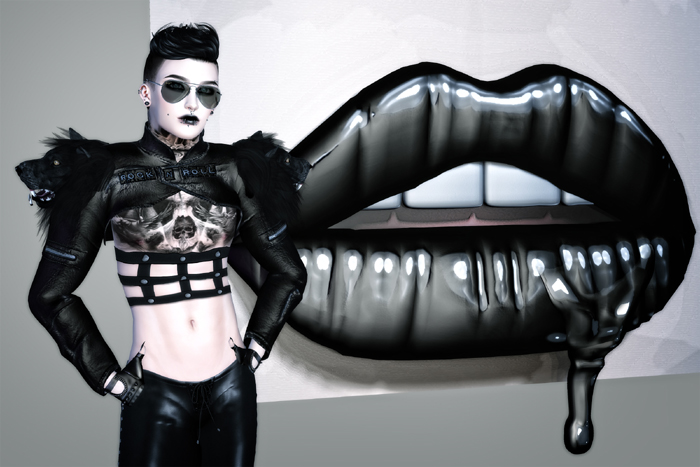 Mesh clothing for the upper body is still hit-and-miss. Unless you find a designer that offers tops especially rigged for V-Tech (and, as I’ve already mentioned, many of those tend to prefer creating the more pretty femboi stuff) anything that goes onto the front of the torso and is Maitreya-rigged will usually have built-in-boobs. The ‘rock-n-roll’ jacket shown above is V-Tech rigged, and thus the bottom part of the torso (over the top of the pectorals) is flat. The Maitreya-rigged version assumes that breasts will begin at that point, and it swells out to accommodate them.

In short: appliers are your friends. Tattoos can assuage that “JFC must I be bare-chested all the time?” feeling, and of course there are applier tops around that—if you dig for them—will give you all kinds of options.

Skins are another issue. I opted for a Glam Affair skin, mainly because that’s the Maitreya body default, and because Pink Fuel offers V-Tech appliers that match Glam Affair. I’ve yet to play around with Omega stuff, but I have all the relays ready to go (Catwa, Maitreya, and V-Tech) so it’s only a matter of time before I set aside a few hours and go nuts with demos to see what I can do.

But those heels are worth it, right, Syd? 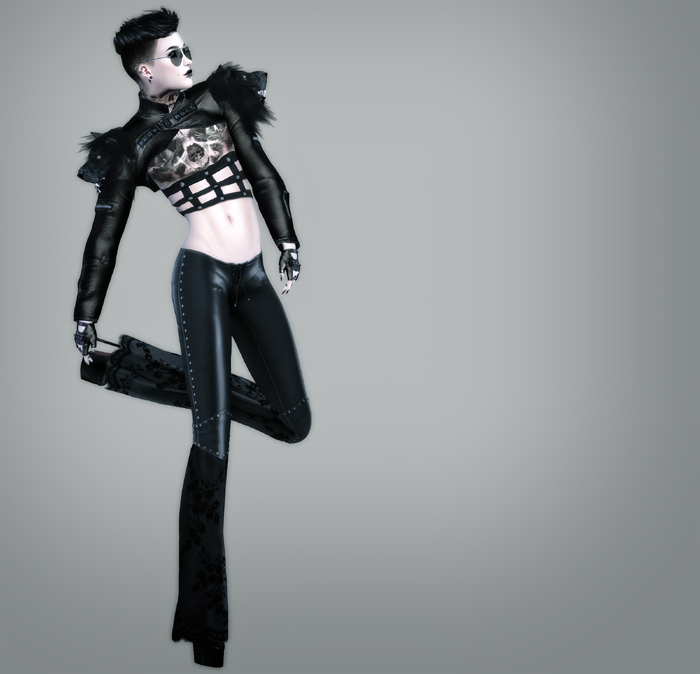 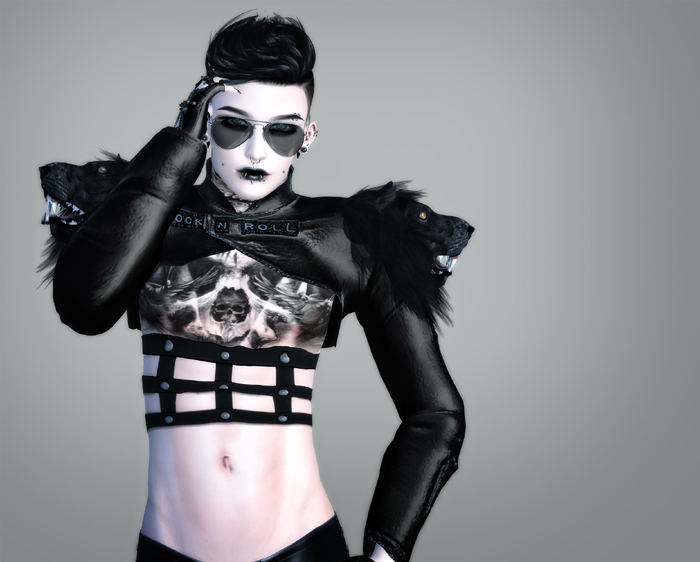