This, my sartorial darlings, is the first in a (very) occasional series of guest posts on Virtual Bloke. Please welcome Matty Luminos to the blog :-)

Decades ago, before the internet existed, roleplaying was done with paper, pens and lots of funny-shaped dice. One of the games I used to play back in the 1980s was Shadowrun, and that was my inspiration for today’s post. Shadowrun was set in a dystopian cyberpunk future that merged science fiction with fantasy. There were hackers and gunfighters but there were also elves and dwarves. And magic. So I worked a little magic of my own and stepped forward in time, and here I am, in 2248. Still looking pretty good for my age, don’t you think? I’m wearing the new Geralt body from Signature, which I utterly love, along with Catwa’s Justin head and Egozy’s Zladim skin in Fair. The pointy ears are from Mandala; I’ve had them for years and still love them. 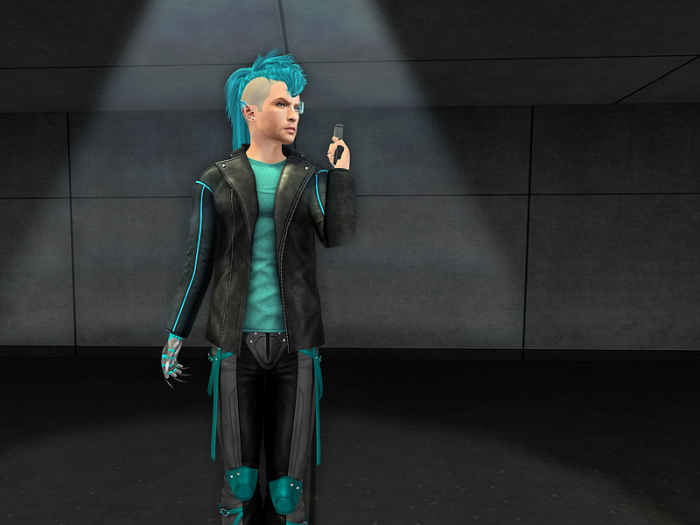 The feature piece of this outfit is this awesome leather jacket with t-shirt from Rebellion, made for Gianni and Slink bodies. It has superb detail in the materials-ready texturing and several colour options in the HUD. I just love the glowy trim along the seams. I chose black with blue trim, and put the rest of the outfit together to match. The back of the jacket features an embossed “biohazard” emblem that really pops with advanced lighting settings on. 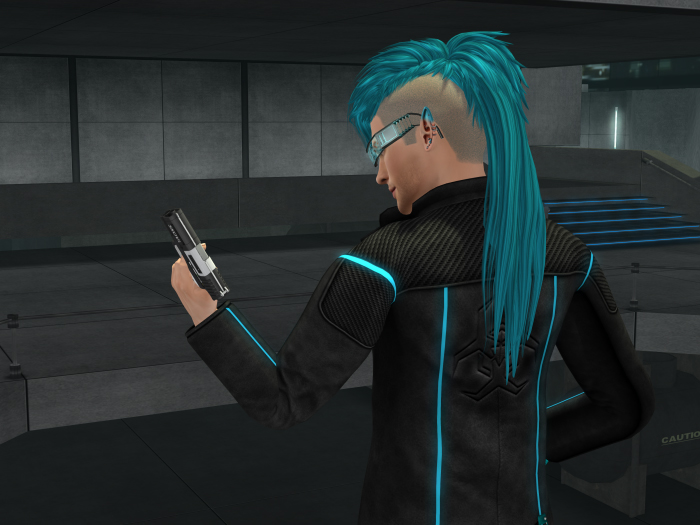 Complementing the jacket are these padded leather pants from A&Y which is pretty much THE go-to store for anything cyberpunk. These pants have a HUD and while you can’t change the colour of the main pants (there are separate colour packs available) all the trimmings, straps etc, are infinitely customisable with the tinting HUD. There are fits for Gianni and Jake here, with both normal and shorter, boot-cut versions of both. Jake fits the Geralt body best. 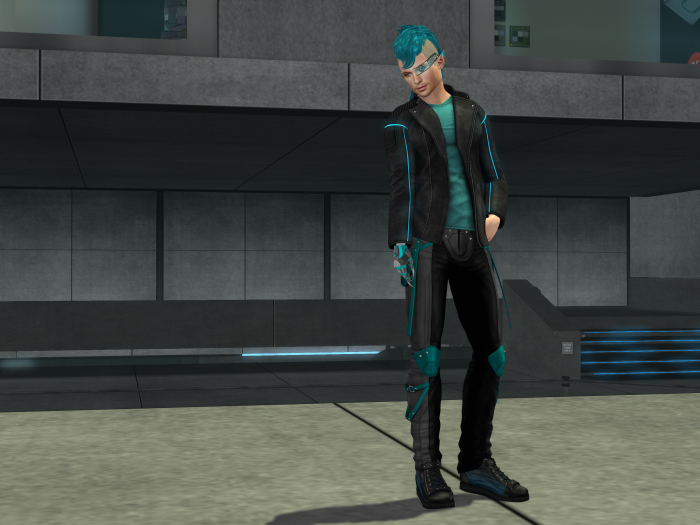 Also from Rebellion are these “Resistor” Kicks and as with the jacket, the attention to detail in these shoes is exceptional. The pack includes Slink fit and a pair of unrigged mesh, along with a texture hud for the fabric side panels. I just had to include a close-up shot to show you how awesome these shoes are. 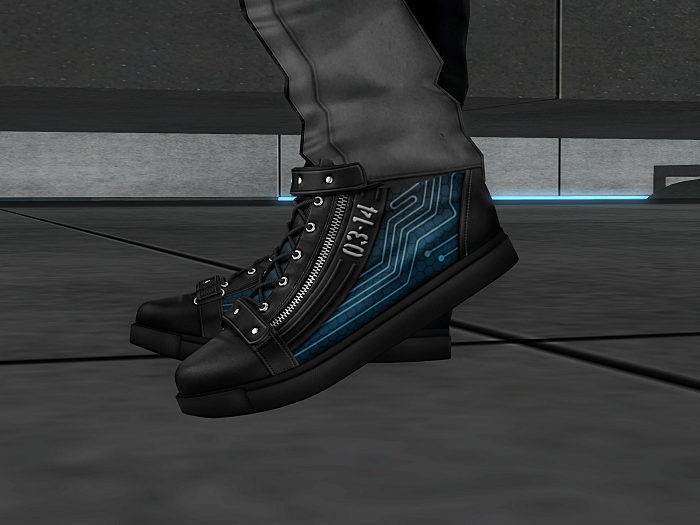 Since this is The Future, the technology of prosthetic limbs has advanced considerably, so I have this awesome shiny new bionic hand from Poisoned Diamond. It’s unrigged mesh and fully modifiable, is available in several colours, of which I chose white for maximum customisation. I turned some of the faces bright blue, hit that Fullbright tickybox and woah! It’s electric! Though you can’t see it all here, it covers the arm up to the elbow and there’s an included upper-arm attachment as well. The pack includes both left and right arms. It’s just a pity the hands aren’t bento. 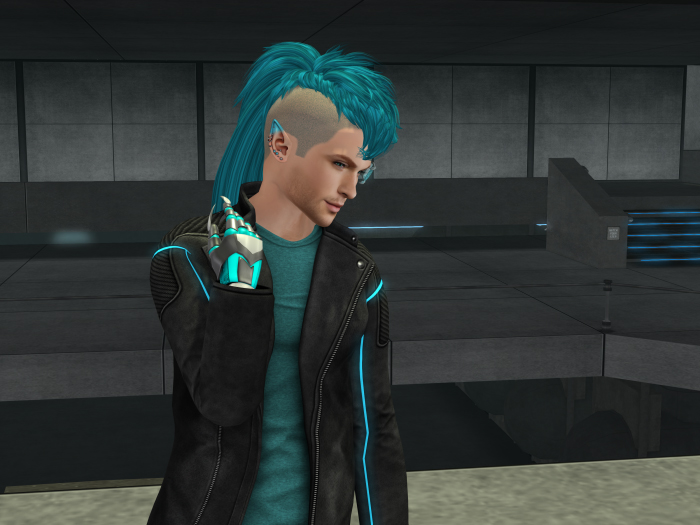 Wait, what’s this? Blue hair? Yup. This is “Valhalla” from Adoness; I think it’s actually made for girls but I don’t care. I got the “Naturally” pack which includes a range of fairly normal colours including my usual dark red, but also includes white, and since the pack also includes a tinting hud, I went a bit crazy. I have to give a special shout-out of thanks to Cruella Pennell of Adoness, who helped me with an issue I had with a faulty HUD, she was quick to resolve it and very helpful. And she liked the sneak preview of one of the pics I sent to her. 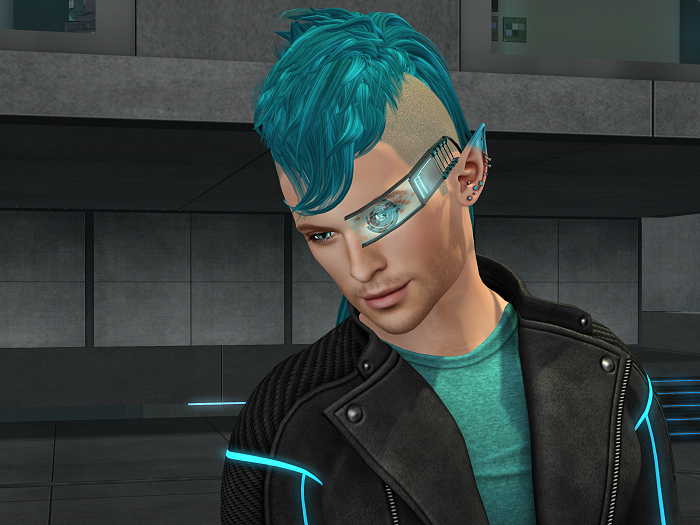 The last piece I’d like to mention is this nifty visor from Paragon. It’s a pity you can’t see it in the pictures but the texture on the glass is actually animated and it’s very, very cool. It’s no-mod (resizable by script) and different colours are sold separately but at just L$10 each, even the whole set is a bargain. Each pack includes a left and a right eye version.

*Rolls dice* Uh-oh. Looks like I failed my time-travel check. I’d better get back to 2018 before I cause a paradox. 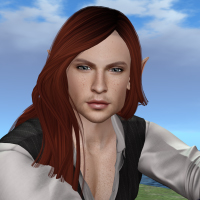 Not too long ago, Skell posted on the official SL forums asking for volunteers to contribute to his blog. I love Skell’s style and I’ve been following his forum posts for a while, so I jumped at the chance and was delighted when he said yes.

I’ve been in SL since 2006 (if you count my first avatar) and for 11 of those 12 years, I’ve pretty much stuck to the same look; red-haired elf/neko, one-handed since mesh hands became a thing. Hell, for a good chunk of that time, I hardly ever even changed my outfit, except to upgrade it to mesh. Recently though, I’ve started experimenting with different looks, from furry to fallen angel. You can see some of my experimentation on my blog and my Flickr feed.

In RL (yes, I know it’s a dirty word) I’m a mature, geeky gay guy from north-west England, I live with my long-term partner and work on the IT helpdesk for a well-known insurance company. When I’m not working or on SL, I’m usually in the pub. I don’t look like an elf in RL. More like a dwarf, to be honest.