The future is coming, people. Better put your goggles on. 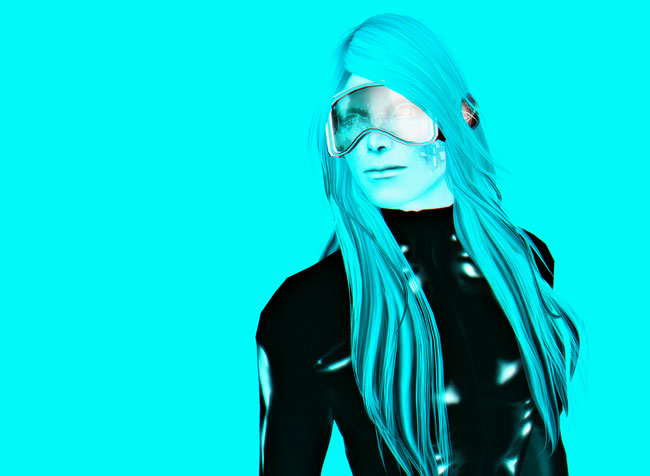 Yes, he’s been fucking around with Windlight again. Settings are at the end of the post ;-)

Today, my sartorial darlings, I am mingling a meme with a preview. Futurewave—one of my three favourite events on the grid—will be starting on Friday, and the blogger packs have begun rolling in. Consider this post a sneaky-peeky for the freaky blokey (okay, I should step away from the caffeine right now) because there’s some great unisex stuff coming in so far, amid the mesh boobage that I sadly have to consign to the “can’t wear this” bin.

I’ll be blogging Futurewave over the next few weeks when it runs, so expect to see SLurls and suchlike once the event opens. Until that time, settle your eager wallets with the knowledge that the event will run on just one sim (no hopping around for you!) and it begins at noon PT on Friday Feb 13th, ending at midnight on Sunday March 1st.

First up, the meme-y stuff

Alongside the preview, I’m also going to incorporate this week’s Monday Meme, which is all about blogging milestones:

My Second Life noobdom began on June 24th 2007, when my ghastly pixellated self rezzed on Welcome Island; the huge castle full of helpful tips that virginal avatars once wandered around when they first popped into existence. Back then mesh as we now know it didn’t exist, there were no sculpts, the sparkling water and drifting clouds of Windlight were a long way off, and flexiprims in your hair were the height of sophistication. You kids today don’t know how well off you are! *shakes his cane atcha* ;-)

Being the lover all things black-n-gothy, I chose the Male Goth look for my avatar. From the back it wasn’t too bad. But one day into my avatarial existence I found the camera controls.

Yeah, I went shopping that very afternoon. It took me another six years to start writing about it.

Virtual Bloke was born on May 24th 2013, after years of me saying I would never write a blog for Skell. So I guess that was my first major milestone: actually starting the damn thing! And, amusingly-enough, my very first post also featured that noob picture of me, and you can see a bit more of my history there if you fancy a giggle at mostly-naked Goreans and a bit of nostalgia for when YadNi’s was the  place to go (hell, it had a money tree).

My second milestone? That came about when people started sending me things. I can honestly say that I feel honoured every time a designer thinks well enough of my work to add me to a blogger list. I’m just sitting over here blathering about my nigh-on eight year addiction to SL fashion, and these wonderful people shove fatpacks at me to play with! My inventory might whimper whenever something drops into it, but I’m going to take this chance to blow pixellated kisses at the designers who enjoy what I do enough to offer their items to be part of it. A lot of people think that blogging is about getting free stuff, and of course that might happen, but it’s not why I started creating my Flickr fashion sets back in 2008, and it’s not why I started blogging in 2013. I did it because I simply adore  dressing up my pixel dolly in all kinds of crazy things. And you insane people want to encourage me! XD

I don’t know when my third milestone came about exactly, but I guess it would be roughly before the last World Goth Fair, when I nervously applied for my very first official event blogger position. The wonderful people of Cursed Events swept me up in their fishnetted arms, and I was stunned when the first response to my application was along the lines of, “Oh hell yes!” Shucks, you guys. *sheepish grin* So yeah, my third milestone would be my first foray into officialdom as a blogger. Since then, I’ve blogged for the World Goth Fair (an event close to my heart), A Clockwork Spiral, and now this is my first official Futurewave (I did blog the last one, too, but without my official name badge on, so to speak).

And now, the bloggy stuff

So here we are, coming up to Futurewave itself, and I’m kicking off with previews from Beautiful Freak and BluPrintz. I always seal-clap when the Beautiful Freak blogger pack arrives, because I know  it’ll contain stunning makeup that I can slap onto Skell’s phiz, and this collection is no exception. (Hey, I’m a poet…) 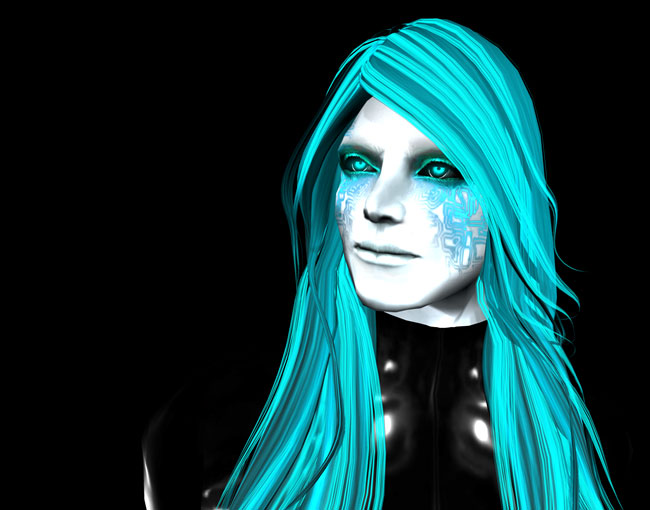 The Circuit Eye Makeup  is just one in a set of new makeup items from Beautiful Freak at this year’s Futurewave. Not shown here (because it’s rare that I can get lippy to work for Skell) is a set of lipsticks and also a full makeover set featuring both the eye makeup and the lips. Sold in several colour packs, I went for cyan purely because of the visual aesthetic in the song I was listening to.

The makeup fades down the cheeks and up the temples, and if you get your Windlight just right it glows like hell. I absolutely love this stuff! 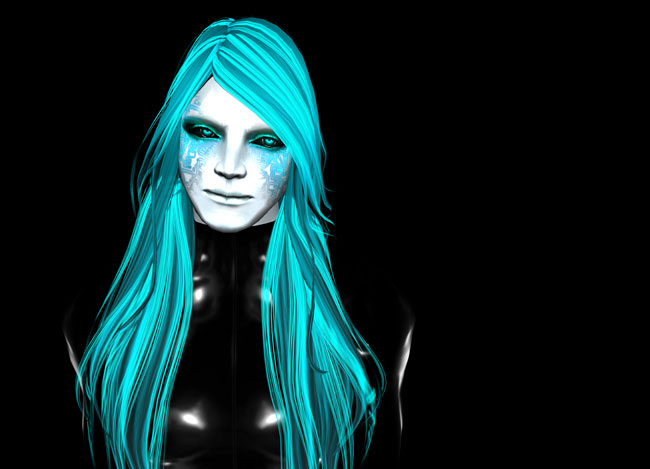 Second up is a series of mesh goggles by BluPrintz, who have several other items at Futurewave, including unrigged heels (hell yes, I’ll be trying those out!) and a funky futuristic tablet accessory.

I’ll admit that I kind of went a smidge overboard on the Windlight here. Uh, I got carried away, mmkay? These goggles come in multiple options, from animated AI female faces, to flickering oscilloscopes, moons; all kinds of stuff. They have a HUD that makes them infinitely-customisable with several metals, multiple options for animated textures on the ear pieces, colour-change detailing, and several options for opacity. I picked the Scanner  pair here.

Yeah, I know. I blew the colours waaaay out. I’ll be featuring these again at some time, and I promise I won’t over-Windlight next time ;-)

My hair is an Exile style and I dipped into the Wildcards HUD for this bright aqua shade. The Windlight that I used really did a number on it. And, if you want to take the same kind of pics, here are my Windlight settings for that. I use Firestorm, so you might not find these settings in your own viewer.

I started with the Phototools B/W Light 12 preset and then edited the preset to fiddle around with the settings (see the left-hand pane). I also used two projected lights on Skell’s face and torso, so I could catch that bright white skin. 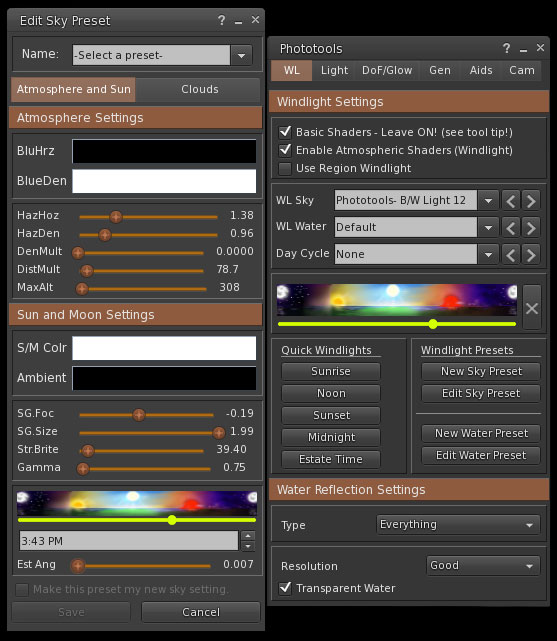 Pull down the goggles, my sartorial darlings. The future is coming… 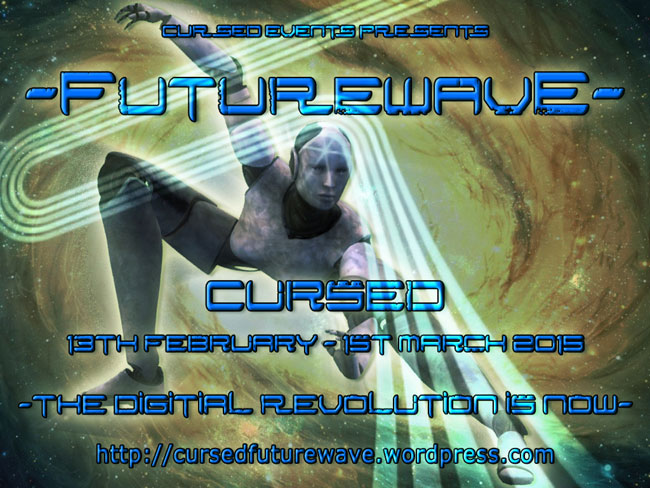 Your music. Yeah, it’s a cover, and yeah I’m giving you the ten-hour repeat version of it. It was my colour inspiration for this post, and it’s fucking awesome.