The second in my series of posts for World Goth Fair, and its musical accompaniment is Gary Numan. Deal. (Actually, Splinter (Songs from a Broken Mind)  is his darkest and gothiest [is that a word?] offering to date, so all of you darklings out there should give it a try. Highly recommended.)

This time I went all-out, purely because I was bloody determined to make this incredible (female) hair from Damselfly work on a male avatar. And, when you go all-out, by god you gotta do it properly. I don’t do boobs, but I will  do skirts and part-skirts (well, sometimes) and I always  do corsets when I get the chance to, so this is the mishmashiest (shut up, I started typing this at 4am-ish as I was getting ready for work) of mashups that I’ve done in a long time. 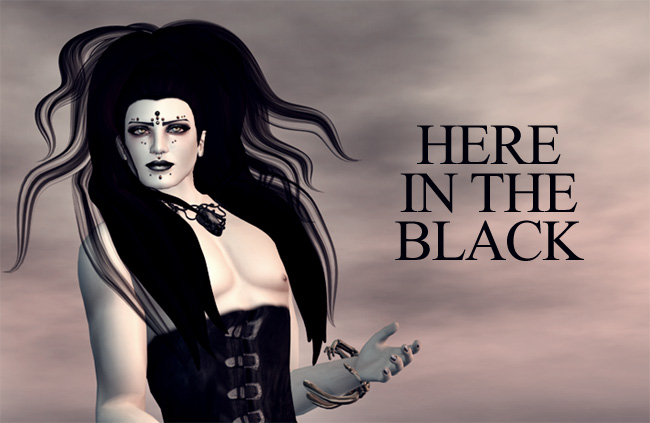 Where to start? Well it was the hair that kicked it all off. As soon as I tried this style on there was no way I was going to miss out on using it in a blog post. It’s the amazing Octotavia  ‘do by Damselfly and, yes, it’s for girls. If I turned sideways you’d see there’s a touch of built-in boob-bump, but it’s not too extreme and thus a guy can get away with it. If he’s got balls the size of melons. Shut up, Skell; you gotta  have, to even think of going for this one! :p

And, of course, once I’d gone bonkers-awesome with the hair I had to go equally OTT with the rest of it. I’d hoped to find at least one wearable corset, and I did. It’s not a mesh item; rather it’s part of AD Creations’s gorgeous (utterly utterly gorgeous; ladies you really need to get this!) Sophie  mesh dress. Under it I put a pair of pants from an outfit I’ve had for a long time: Vlad  by Utopia Designs. They’re not at WGF, but that entire outfit is perfectly goth with a nice vampish twist to it. 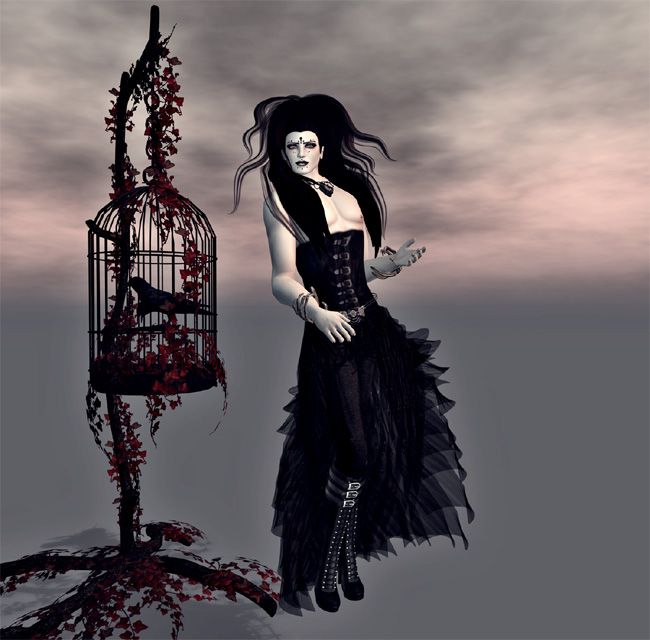 The boots are courtesy of The Little Bat’s gacha at WGF: the Axi Boots  (shown here in grey; scroll down for a close-up). And, after that I cammed back, eyeballed Skell, and realised he needed something around his midriff. Hrm, but what? Could I possibly have a belt or a part-skirt that would work? It turned out that I did. BitsyB has a Frills Galore  dress that has the perfect swept-back open half-skirt, and a dig through the “woah, mama!” jewellery from Sax Shepherd Designs brought up this Risq: Desclos  belt. I’ll be featuring more from this set in a later post where I focus more on the accessories, because it’s a stunner. (Incidentally, although made for female avatars, the belt is very easy to edit so it’ll cradle much slimmer male hips). 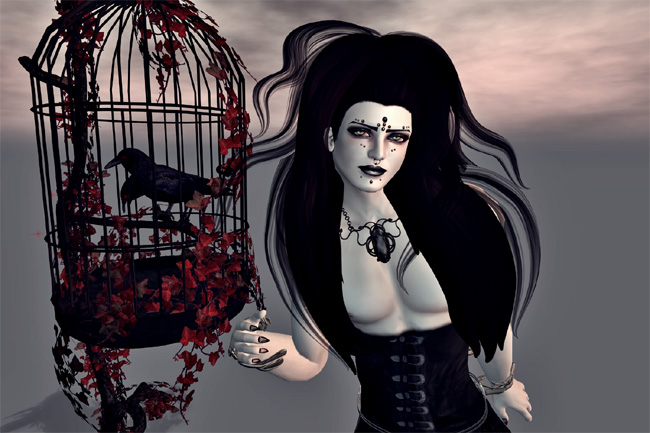 The skin is an oldie-but-goodie from Tableau Vivant (pretty much my go-to for looks of this ilk) mainly because I wanted something pale that had no eyebrows. Why? Well, as soon as I saw this Loveless Makeover  set from Beautiful Freak Cosmetics, I may just have shrieked, “OMG! Siouxsie Sioux eyebrows! I’ve been looking for those for AGES!” 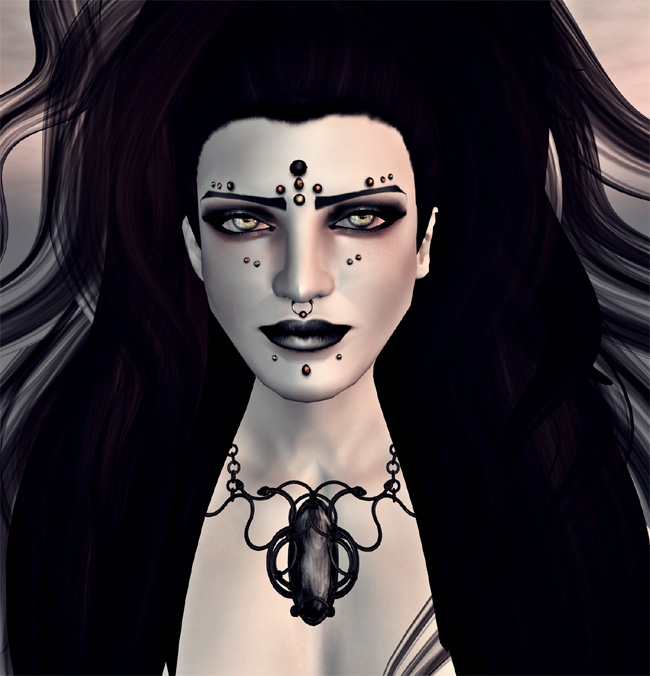 And then, natch, we must accessorise. I already have a ton of stuff by Ellabella, and I love Ellantha’s piercings so much that I’m willing to spend ages editing them to fit Skell’s weirdly-shaped features. Shown here are the Division  facial piercings (I’ve rotated the studs above the eyes just a tad, as that worked better with those amazing brows).

The necklace is part of the Naga  set from CPD (Chaos, Panic & Disorder) and, again, I’ll be featuring more of those in a dedicated accessories post. I love this necklace, with its flowing metal tracery and the huge stone. From a distance it looks like an entangled beetle. 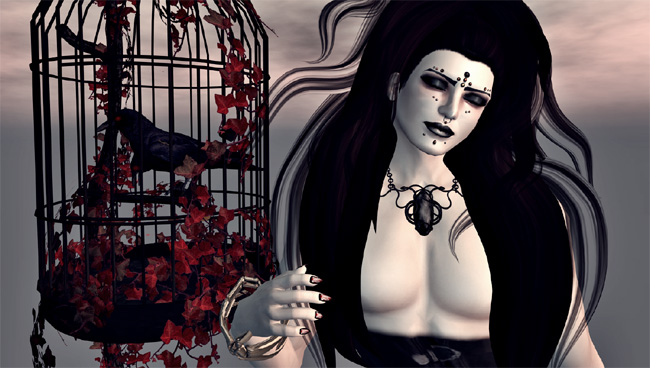 Nailssssss, my precious! By Snow again, this time with the Ribcage Manicures, and look, Ma! I wore a dab of colour! A final accessory (how could I resist these, with a name like ‘Skell’, seriously!) is the Mano  set from BLiensen + MaiTai. Honestly, I love these to bits. I’m only showing the clutching skully hand bracelets here, but the rest will feature in the upcoming accessories post.

The beautiful decor item is the Nevermore Fantasy Raven Cage  by Angelic Designs. It’s low-LI mesh (epecially for how detailed it is) and it contains a very subtle deep red sparkle, which can be turned off if you don’t want it (I loved it, and I’m the first person to cringe at anything remotely blingy, so this is truly subtle). The autumnal red of the ivy just sets it off perfectly.

Finally, a close-up of the boots for you, and a mention that the poses are from the Promenade set by NanTra at WGF (which comes with a lovely parasol, although I thought Skell was accessorised enough already!). 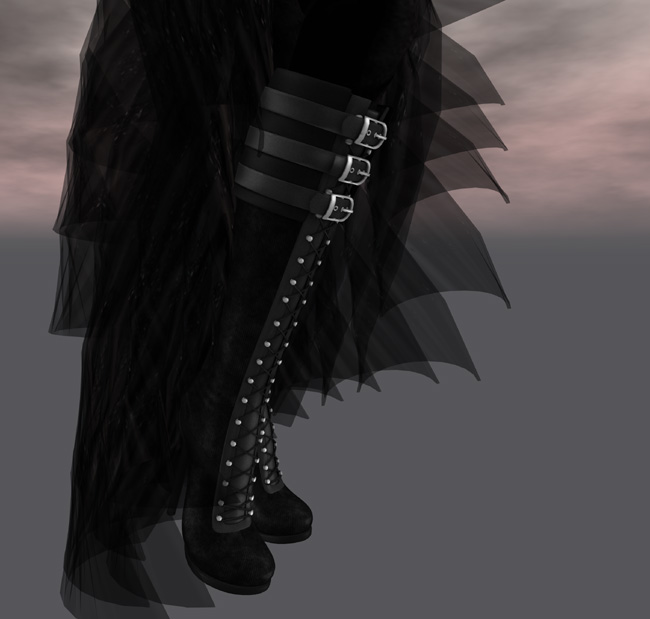 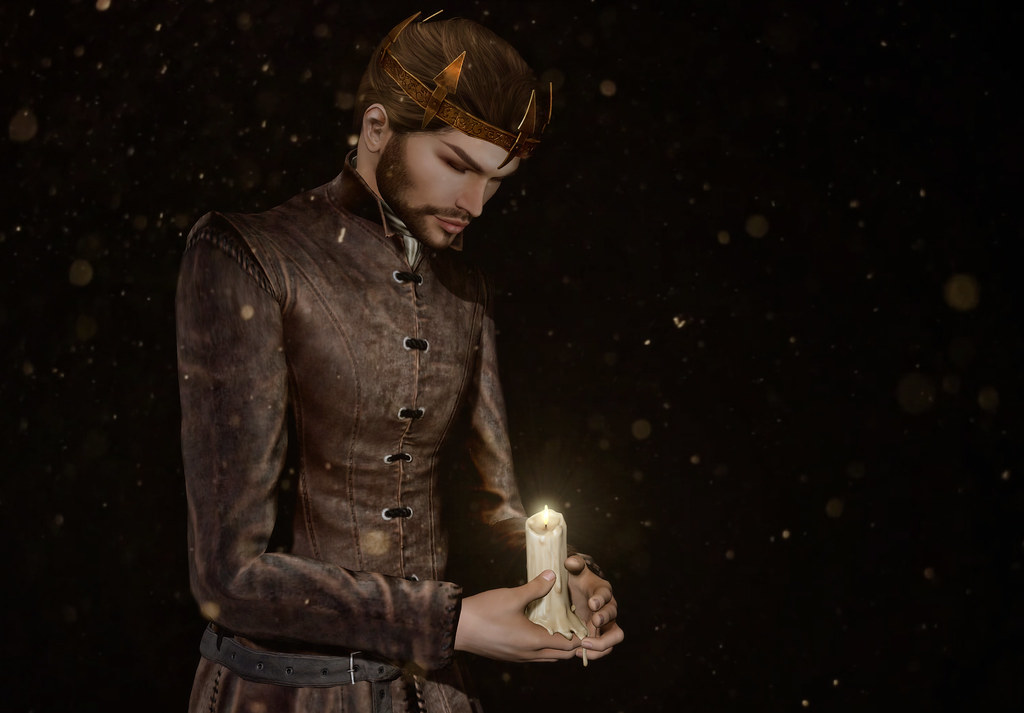 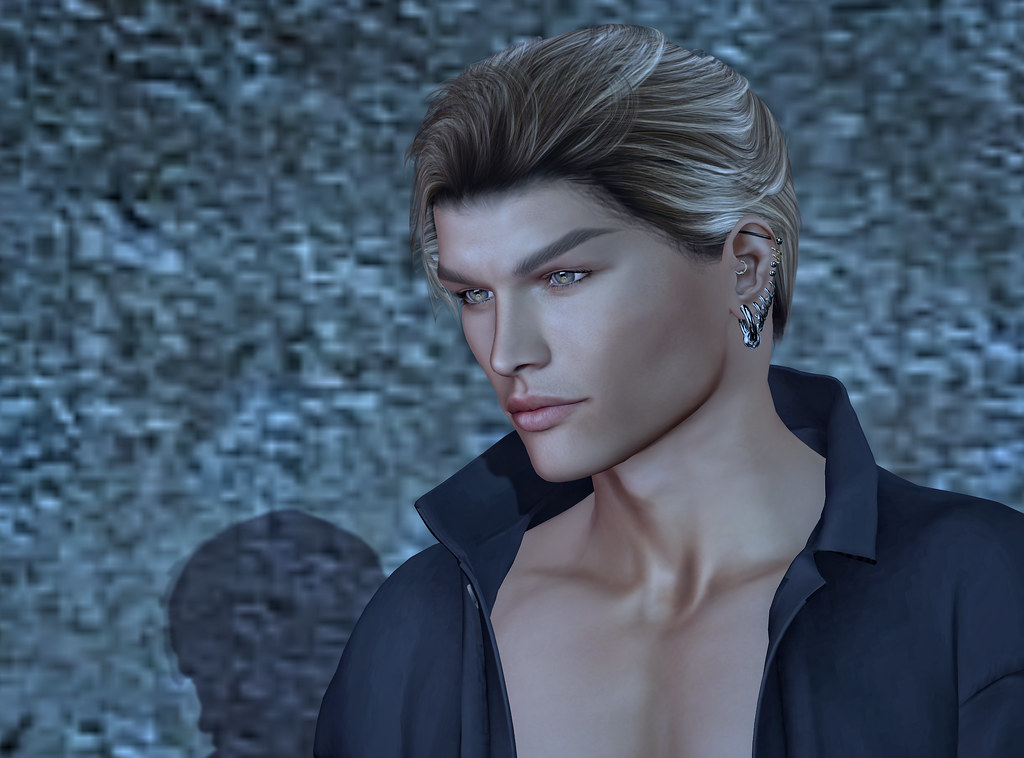 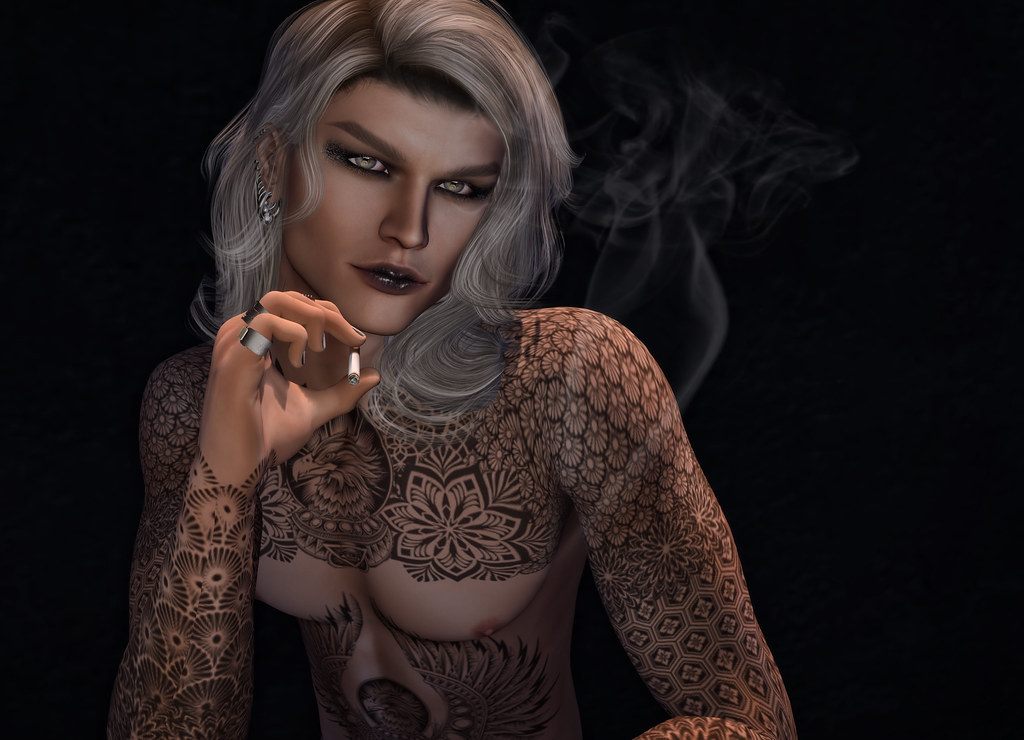 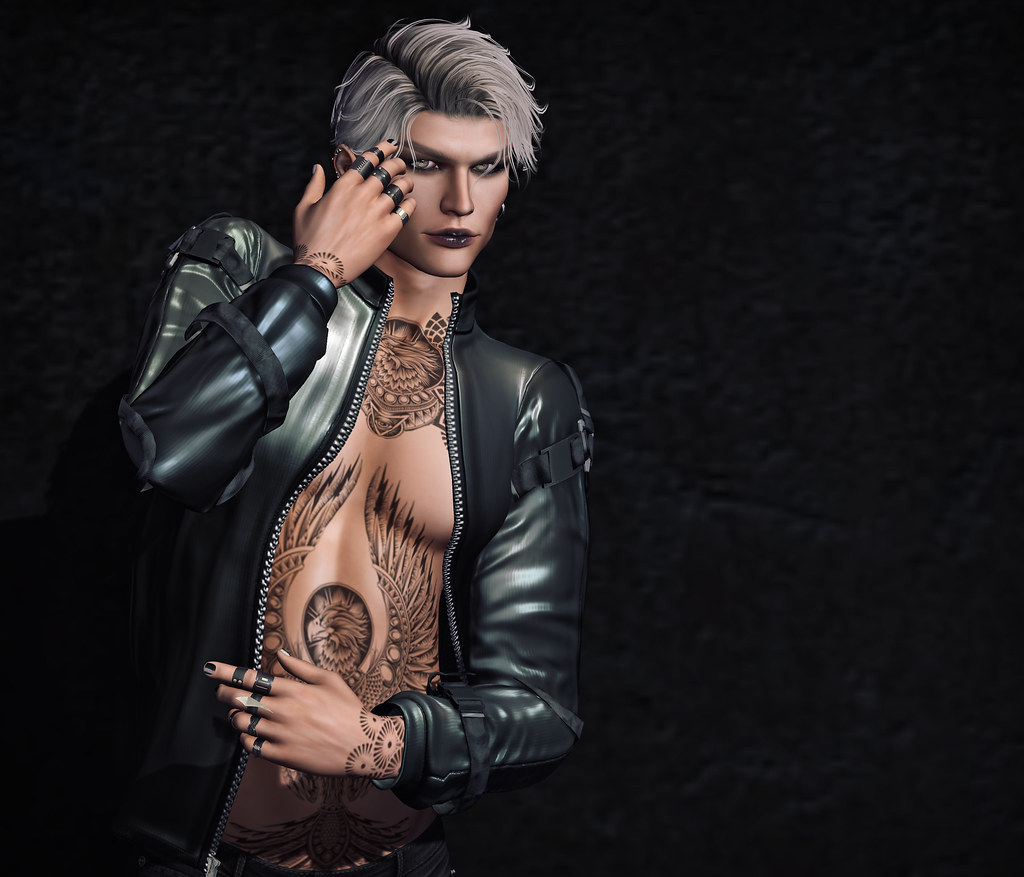 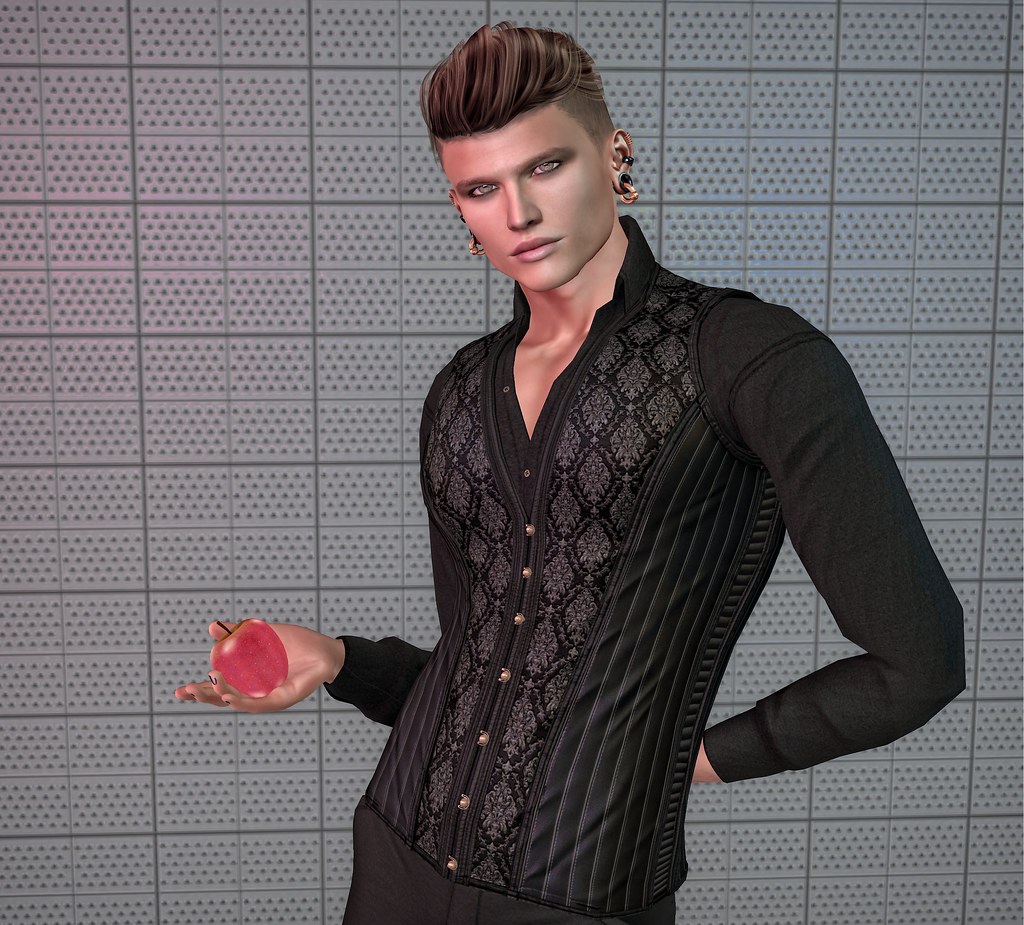 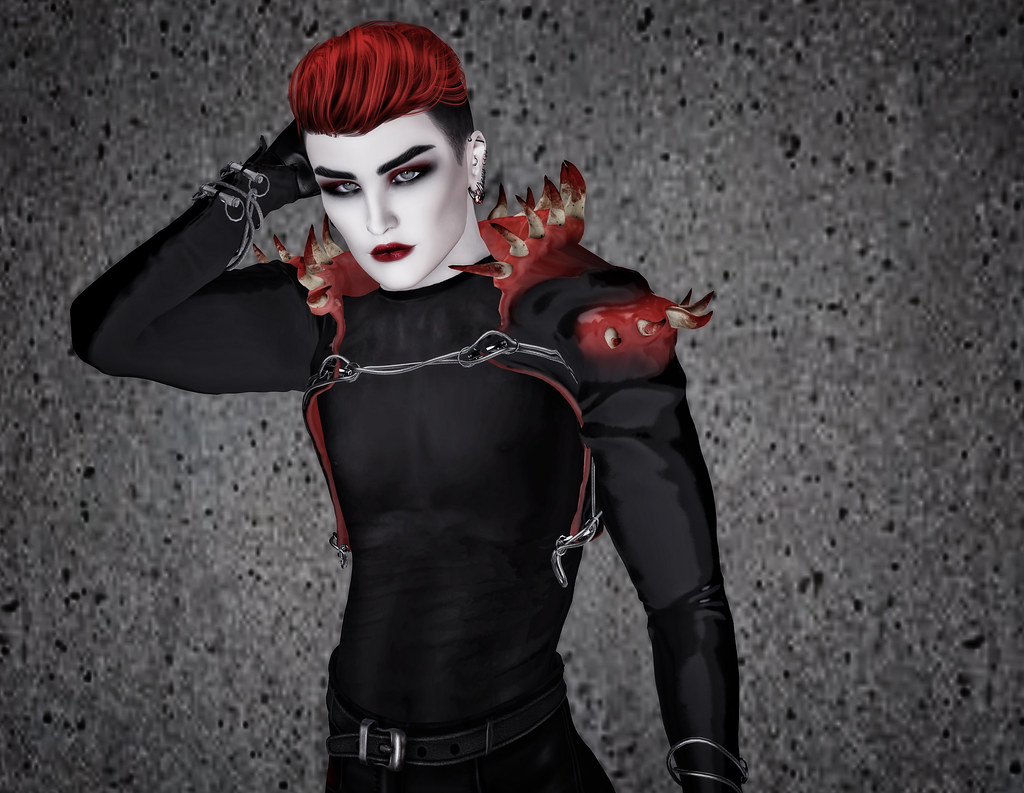 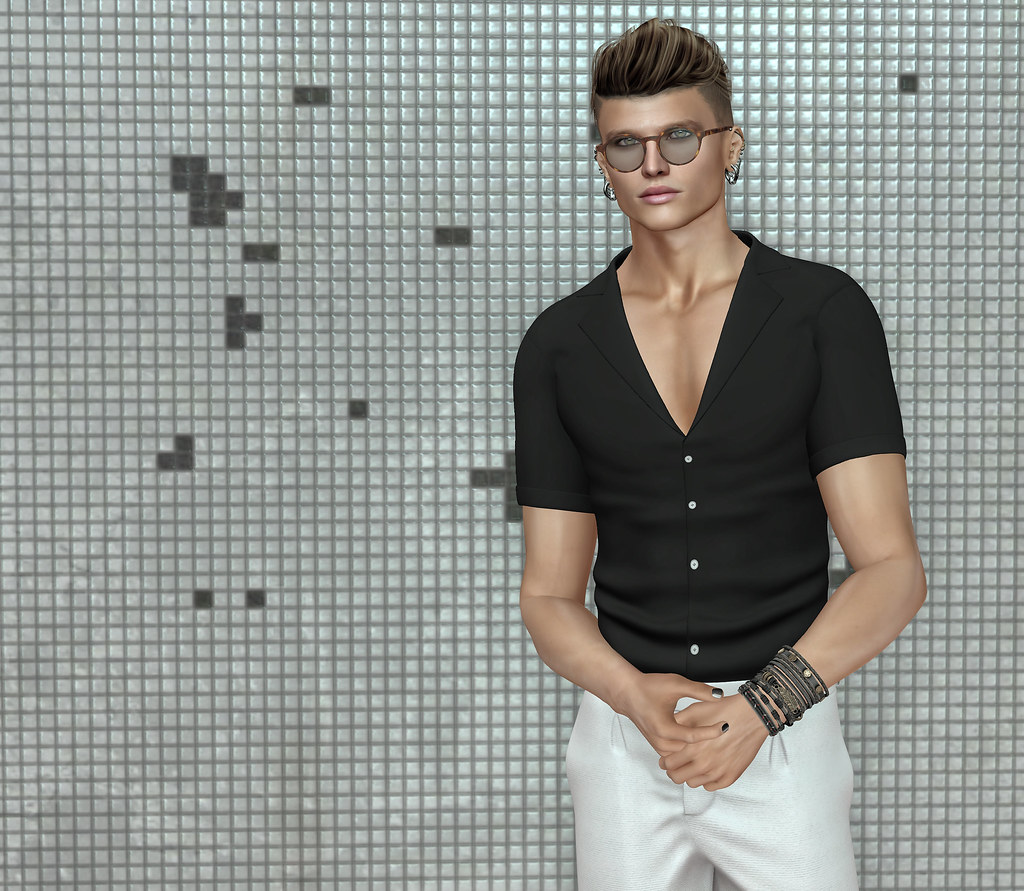