Back with a bang, my sartorial darlings. The blog has finally  moved to its new server, so I’m celebrating with a cornucopia of goodies from the June Mens Dept collection. Oh, and a feather boa ;-) 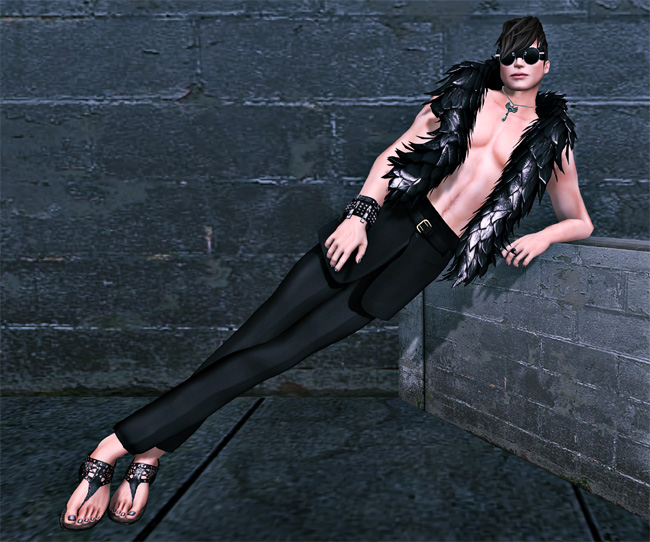 I just about shrieked when I saw these pants by David Heather. I mean, let’s face it: we all know that I love anything slightly unusual, out-of-the-norm, and just plain different. After so many events at which all I could find were dropcrotch pants and jeans, it’s an absolute joy to find well-tailored clothing like this. There’s something so understated and ‘instant classic’ about them, and the shadowing is gorgeous.  Multiple colours are available, but of course I went for black.

I waded through my inventory for a couple of days, trying to find something equally amazing to wear with them. And then, on a random Marketplace search (I don’t even recall what I was originally looking for now; I think it was male costumes or something) I came across an old favourite store of every avatar over the age of about three years: Bare Rose. June Dion has long been an incredibly prolific and generous creator (full outfits at her store are around LS150 and in a bewildering array of styles) and she’s uploaded all of her newer mesh items to Marketplace. I saw this rigged mesh feather boa for men (INSTANT purchase!) and knew I had this look sold.

And then, once I enabled Advanced Lighting to take these screenshots, I realised it also has the most amazing materials on it. Holy crap. 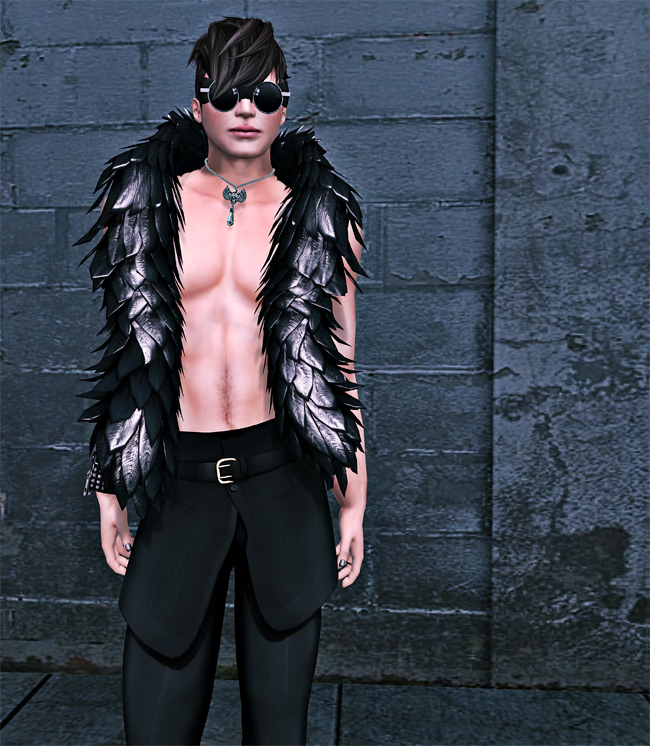 So what the hell footwear would set off a look like this? I tried a couple of pairs of boots, and – even when those boots were high-heeled – they didn’t work. More rummaging, digging into recent purchase folders, and BINGO. A couple of weeks ago, these sandals for Slink feet were out for L$50 Friday at Pure Poison. They’re still available (full price now) and, as with the boa, they have some fantastic materials work in them. 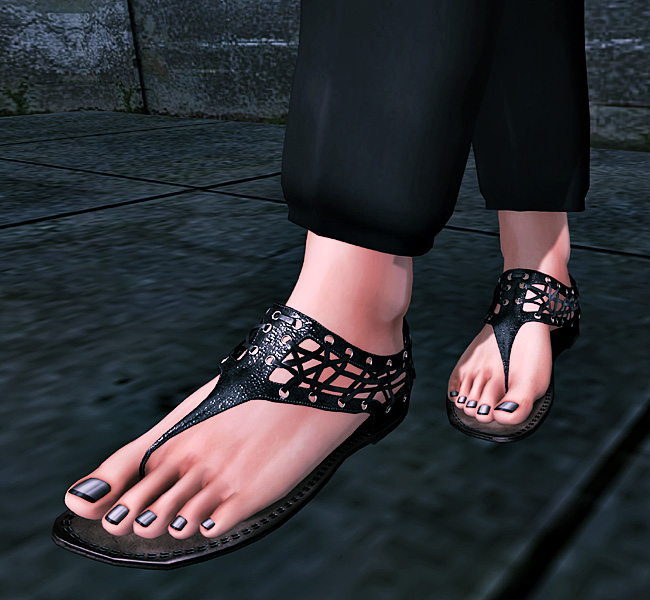 And, since Ivey Deschanel has been making Slink nail appliers, I headed to Sn@tch, where the new release wall this week contains these black-tipped appliers. Again, lots of natural shades, but there was also a gorgeous silvery-grey shade, so that was what I went with.

Staying with Sn@tch, and I had a necklace that I’d recently bought (couldn’t resist it; hell, its got a skull on it, and with my avatar name there’s no way I’m passing that up.) 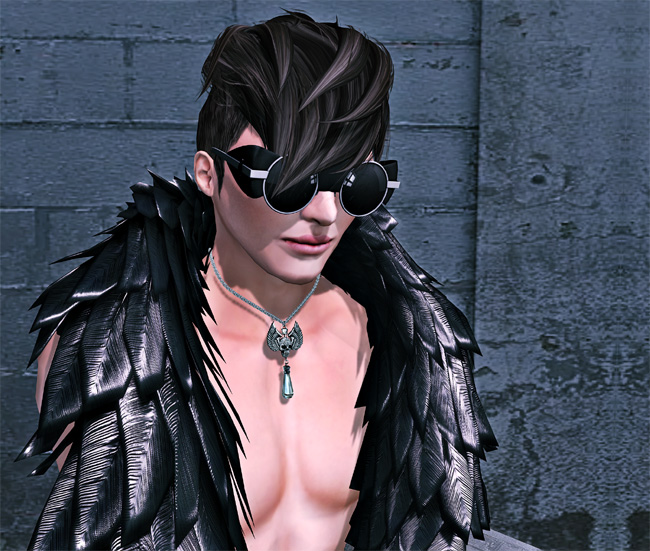 And yeah, those shades. Totally flashing me back to the 80s. Remember the Thompson Twins? Uh-huh ;-) These are from David Heather (again; like Lucien Marcelo, he’s bringing out the classic, smooth-lined stuff that I adore lately) at Mens Dept. The hair, too, is from another fast-becoming-a-firm-favourite-store for me: INK, at Mens Dept. 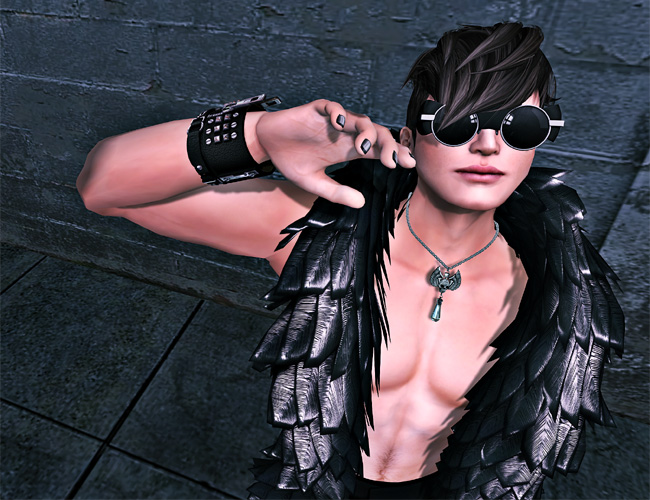 I gotta pause here, to mention the skin. Until recently, I’ve not been able to get Clef de Peau skins to work on Skell (his mouth and their lips never quite gelled for me) but the latest two new releases from there have been different, and I fucking love ’em. This is Mathias, at Mens Dept. It comes with an awesome array of stuff, including Slink appliers for hands and feet, and  for Slink nails (again, both hands and feet). Also? Lovely little happytrail, there. Not too in-yer-face, but enough to invite an inquisitive tongue. (Hey, Daros…? *bats eyelashes*) 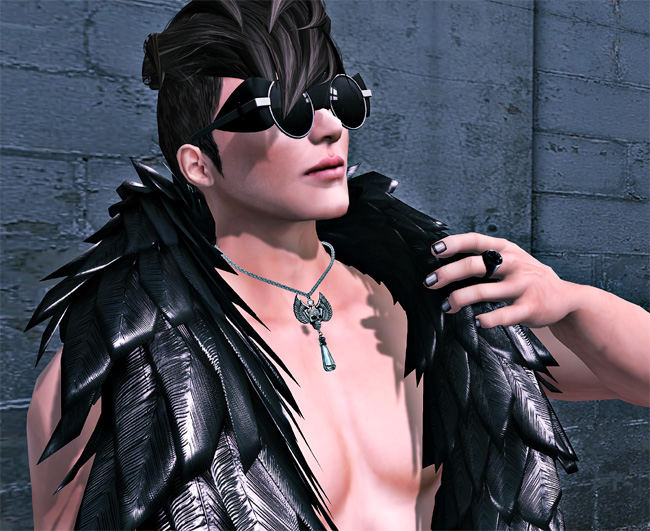 The ring (gah! apologies, because the lighting didn’t work to show that off at its best) is by Swallow at the current Dressing Room Fusion event. There are three rings available, in differing metals: a huge ‘Trust no bitch’ one, a locked heart, and the one that I picked, with a fleur de lys on it.

EDIT: Adding another shot with a better view of the ring for ya :-) 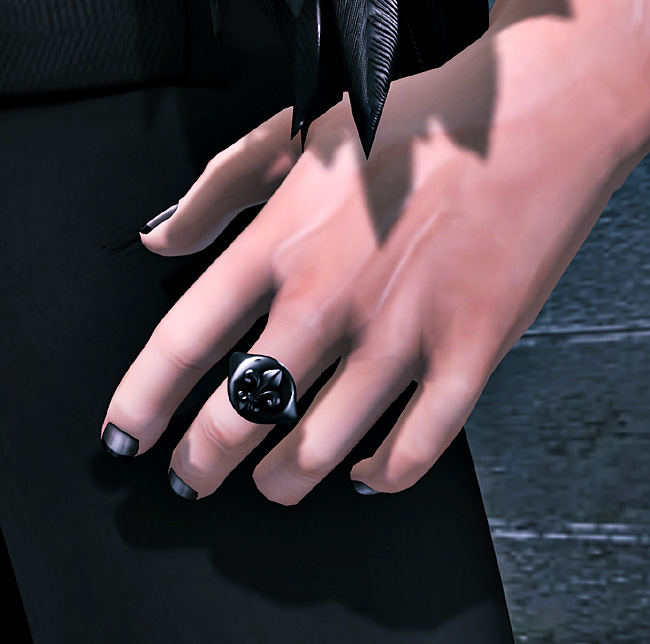 And finally, if you don’t snap up the latest bracelets release from Mandala at Mens Dept, then I’m sorry, but you have to be nuts. Male and female versions are included, and you get five styles in each colour pack. Seriously, that’s a lot of bracelet for yer buck, so to speak. And again  with the jaw-dropping materials! 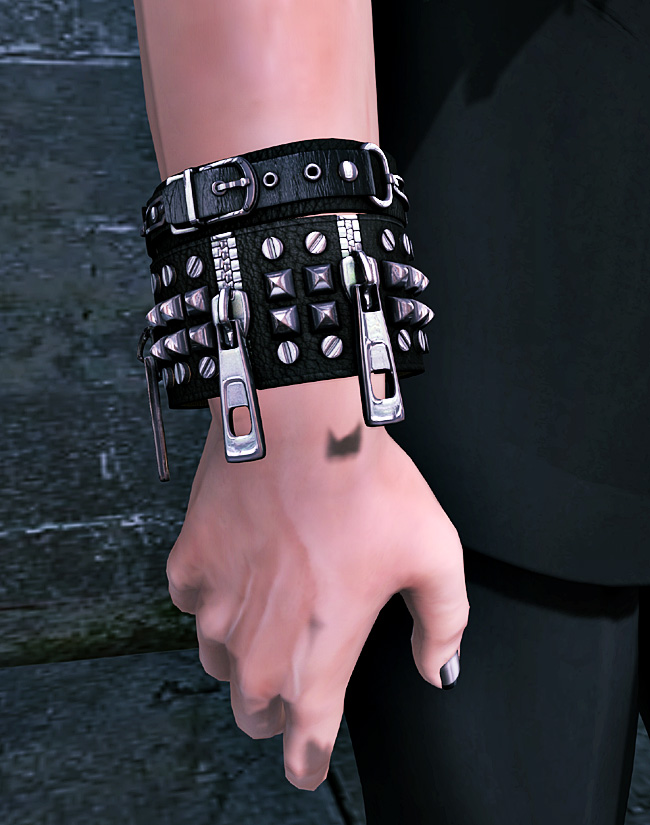 4 thoughts on “Sometimes my knees can barely hold me up”