After all, anyone who would spit at what I’m about to show you must be missing half a brain and both eyeballs ;-)

Finally, my sartorial darlings, Skell can get up off his knees (look, I started this post in the gutter and I’ll carry on, if it’s all the same to you) because what he’s been waiting for—for what seems like years—has finally happened: Swallow has released something new he can wear! More precisely, they’ve released a male Catwa head applier.

A couple of years ago my favourite SL skin store stopped making skins for system avatars and moved to making installers for TMP heads only. Skell would sob and wail and gnash his pixel teeth every time he saw a stunning  new skin on Swallow’s Flickr stream, only for it to be TMP-only. My lovelies, you know  how I feel about TMP, so there was no way on earth I would compromise my moral standpoint just to look pretty. I’ve finally stopped bitching about mesh heads, to the point where Skell hasn’t taken Catwa’s Daniel head off since he got it, but I’ll never stop bitching about TMP and their business practices. Not sorry about it.

But I was browsing Marketplace the other day, looking for cheap stuff to throw together a Noob Dude kind of post, and I remembered that Swallow have a great L$1 skin on there. Imagine the shriek I let out on seeing a male Catwa applier at the top of Swallow’s page. Since I practically live  in Swallow skins, I was all over this like a bad rash. (Ew, nasty analogy there, Skell…)

So here is Martin, in all his gorgeous glory: 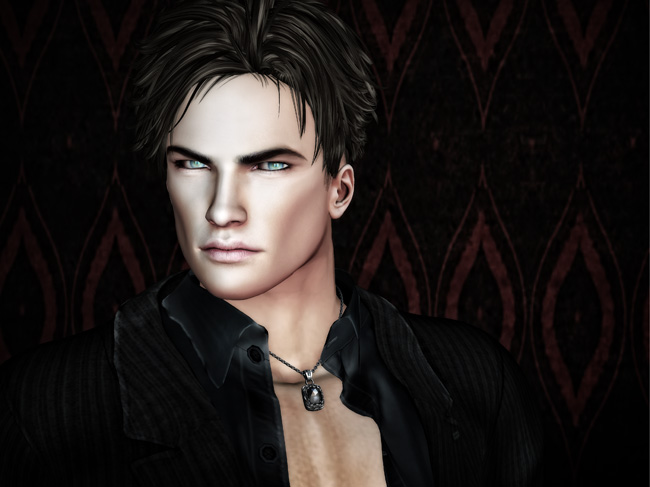 Oh hell to the YES. Sign me up and I’ll roll over. What a face. If there’s one thing I’ve always adored in Swallow’s skins, it’s the beautiful detail around the eyes, but also this time look at the lip textures. This skin is, quite simply, exquisite. To the point where I’m going to do something I don’t usually bother with when it comes to skin posts: I’m going to zoom in on several points.

Let’s begin with the eyes and brows. So many skins fall down—when it comes to my personal aesthetic—with the brows. They’re often either too heavy and thick, or they’re too unkempt. Skell has always been well-groomed; even when he has facial hair it’s neat. These brows are quite heavy, but perfectly-shaped, and the detailing of the individual hairs is so beautiful. And, moving onto the eyes, we have waterline eyeliner built-into the skin, which is subtle enough that it won’t turn off guys who are averse to any kind of cosmetic look on their face, but strong enough to give definition to the eyes. 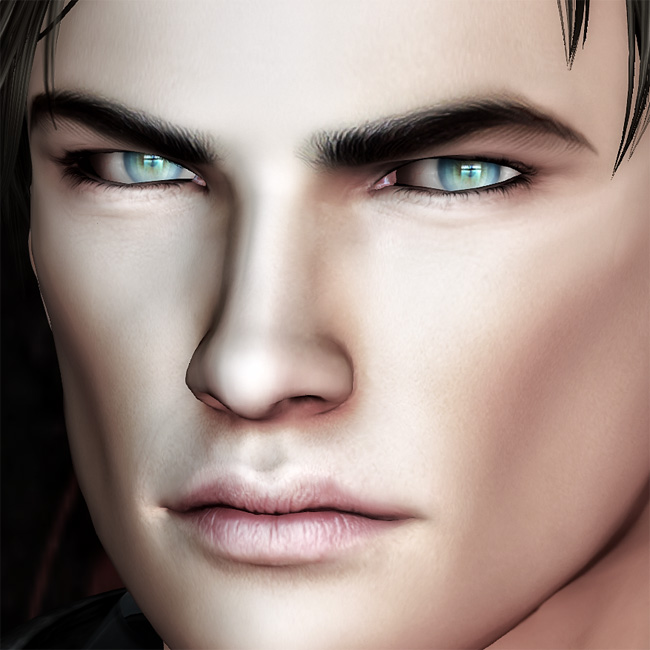 And then there’s that mouth. Is it wrong to want to snog your avatar?! Cheekbone shading, too, which—alongside the included shape—means you could cut glass with them. This is as close as I’ve seen Catwa’s Daniel come to the TMP head. It doesn’t match the jawline exactly, but the cheekbones are spot-on.

Overall, in each skin tone pack, you’ll find the applier, a shape, and a pair of high-definition ears. I own almost all of Swallow’s mesh ears, and these are a doddle to fit. I find they stick out a bit too much for my liking, so I simply kept the Catwa Daniel ears enabled and edited the Swallow ears over the top of them, until they were almost ‘merged’, then hid the Catwa ears and fine-tuned the positioning of the Swallow ears.

Swallow appliers are available for most male mesh bodies, and there’s an Omega option, which will also work with Vista’s Bento hands.

I love this skin so much I splurged on the fatpack. Now… over to you, Æros ;-)