This is the second in my roleplay log posts (as before, names of other players have been changed) and, whereas the last log focused on when it all goes Pete Tong, this one focuses on that lovely moment when a roleplay scene has gone right and you leave with a smile on your face. This post is shorter, and with far less commentary (mainly because I don’t need to point out bad RP stuff like silent poses and metagaming, etc).

Rivet Town was a (sadly short-lived) roleplay sim back in 2008. From memory, it comprised three sims: one for the upper class side of the city, one (across an awesome bridge) for the undesirable side, and one which was a fabulous old amusement park. I took Skell for an OOC wander around there, and you can check out the pictures I took (as well as some IC shots) in this Flickr set.

Daros and I played in Rivet Town as The Gentlemen Bastards, which – as you probably know – is the collective name we gave to our stores, and if you ever see me out and about then I’ll probably be wearing ‘Gentleman Bastard’ as a group tag. The Gentleman Bastard is, like RockStar, one of Skell’s alter-egos. He’s a thief, and a ne’er-do-well. This was how he looked back in 2008: 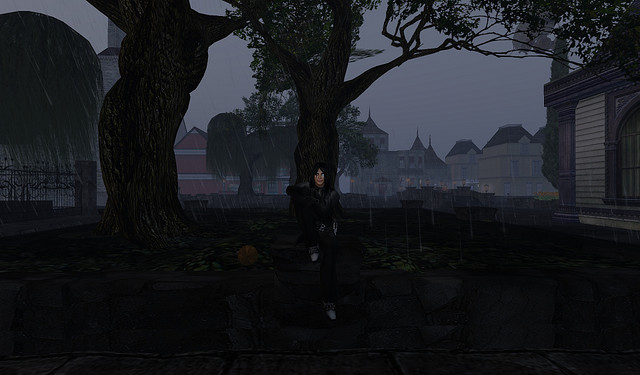 Always smartly-dressed, he was one of the two gang bosses in the town. 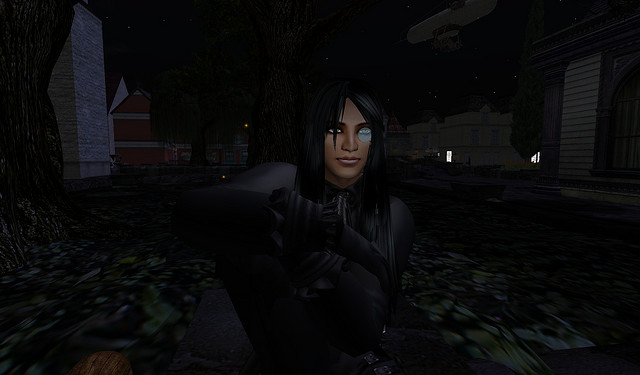 You don’t fuck with him. If you hear the *snick* of his switchblade, then it’s too late! 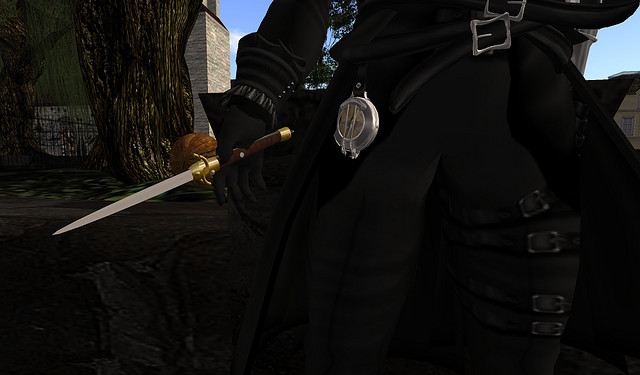 He later got an upgrade. This is how the Gentleman Bastard looked in 2010. (I think it’s time to upgrade him again, so that’s a task for the future.) 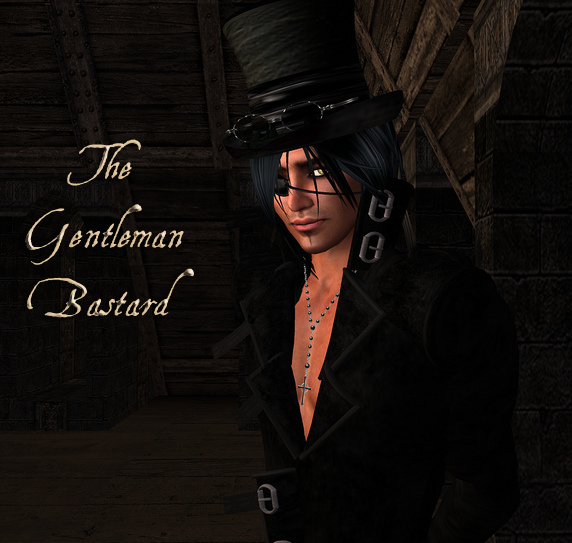 ETA: Here’s his 2019 updated version. Gone is the eyepatch, but he now has a ‘blinded’ eye on that side. This is possibly going to be his final form, as I really love how this version turned out. 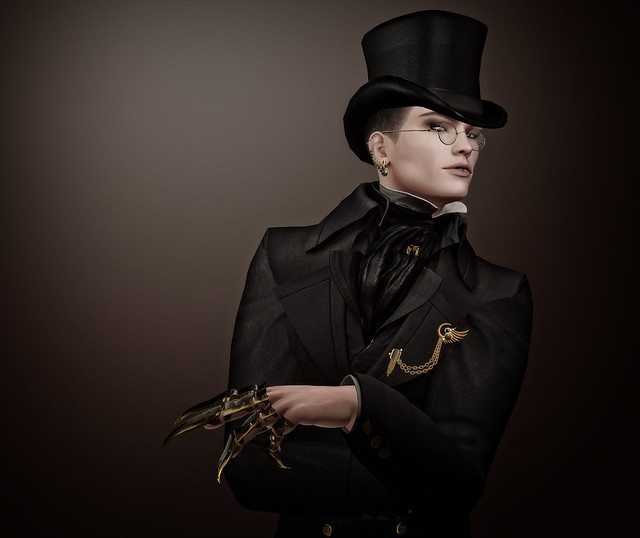 Skell wanders the posh side of town at night, making his rounds, eyeballing locks and windows for vulnerabilities and musing to himself as he walks. (This was, and still is, a favourite thing of mine to do when a roleplay sim is quiet, especially when I’m new to the sim and still getting a feel for it. Even if there’s nobody around, I’ll go walkabout and roleplay my reactions as I do so.)

He enters the town’s church (a nice warm place to be on a chilly night) and says his piece to the Almighty. As he does so, he’s interrupted.

Commentary (mainly to denote where I was in my sim walkabout) is in orange and will also contain notes where I slowly figured out Skell’s character. This is a short RP log, but it was a nice one. I was new to the sim (this was my very first walkaround In-Character), and “Miss Davidson”‘s great roleplay gave me a warm welcome.

Everwind Beardmore was the fabulous NPC (non-played character; AKA a bot) that stood at the railway station landing point up in the sky. Skell made a point of greeting him every time he went there ;-) (Incidentally, I loved how that was the sim owners’ way of letting players know what the weather was/what windlight they should use for the relevant atmosphere.)

[2008/08/21 19:31] You: Good to see you again, old chap.
[2008/08/21 19:31] Everwind Beardmore: Welcome to the Rivet Town Train Depot. Our town is open for full-immersion roleplay but some aspects are still being developed. We thank you for your patience. Now, if you’re ready, just step through the door and choose your destination. Oh, and if you would like, you may click on me to join Rivet Town Citizens and become part of the adventure. Good day to you!
[2008/08/21 19:31] Everwind Beardmore: Oh! One more thing…the weather looked threatening this morning but it seems to have cleared so you should have a pleasant evening! (Set your Evironment to Region Default)
[2008/08/21 19:35] Skell Dagger chuckles. “How quaint.”

Teleporting down to the main sim, Skell begins to wander alongside the canal at the posh end of town.

[2008/08/21 19:38] Skell Dagger eyes the mansions across the canal with a lick of his lips. “Rob you blind, so I shall,” he whispers, the words caught on the wind and carried to the water below. “Rob you bastards bloody blind.”

He walks past two women who are in conversation together. ICly, he wouldn’t chat to them, but he would politely acknowledge them.

Characterisation: Oh, he’s a rogue, this one ;-)

Characterisation: Believes in God (as did most people of that time) but his belief is shaky at best. God’s not been looking out for this thief, which leads me to believe that something bad has happened to Skell recently.

Characterisation: He may be a thief with no respect for authority, but he’s surprisingly honest when it comes to emotions.

Characterisation: Bastard he may be, but he’s a gentleman bastard. Was brought up to respect women. He wouldn’t dream of robbing her person. (In fact, I rather think he’s the type to watch from a distance to make sure she got home safely. That’s not to say he wouldn’t rob her home before she got there, though…)

‘Peelers’ (for reference) was the old name for the police in Victorian times (after Robert Peel, founder of the police force in England). In Rivet Town, the police station was right opposite the church.

[2008/08/21 19:59] Skell Dagger comes to a halt outside the courthouse and stares up at the solid brick walls in silence. A quick glance around to make sure no Peelers are lurking, then he spits on the ground. “I’ll give you that for your justice,” he growls, boot heel grinding on the cobbles as he turns away in disgust.

Characterisation: Yes, something bad has happened to him all right. This gave me a hint of backstory, too: that someone he cared about got caught and jailed.

[2008/08/21 20:03] You: Stopping right outside the door of the police station, Skell raises a gloved hand and scratches his fingertips very gently over the glass. “Rat-a-tat-tat,” he sing-songs gently. “Do you boys smell a rat?” Then, with a gleeful little laugh he carries on walking, whistling a jaunty little tune as he strolls down the street.

Characterisation: Likes to keep the police on their toes, and relishes when he can get one over on them.

One of the sim’s events was a vote for the town mayor, hence the sign that follows.

Characterisation: Note that his lips are moving slowly. He can read, but it’s difficult for him. I wasn’t aware of that, until he read the sign ;-)

Back to the canal. All the time as I’m wandering and roleplaying, Skell’s character is slowly revealing both himself and his past to me.

Characterisation: Clearly he had a lousy childhood.

He heads to the cemetery.

Characterisation: Sometimes he finds himself without a warm and dry place to rest his head, indicating that he’s either generally homeless or living in the Victorian equivalent of various squats.

[2008/08/21 20:16] Skell Dagger hops up on the wall, shivering as the coldness seeps from the stone through to his skin. “Chilly arse,” he mutters with a little chirp of a laugh. “Never had a cold arse remind me I’m alive before.”

A cat yowls somewhere close by.

Characterisation: He hates cats! That may seem insignificant, until you think of the differences between cats (independent) and dogs (loyal). Skell is clearly a ‘dog-person’ because he values loyalty.

Leaving the cemetery and returning to the canal.

[2008/08/21 20:23] You: After a long time spent staring down into the water, Skell heaves another sigh. “I still miss you,” he whispers, then slides off the wall and back onto his feet.
[2008/08/21 20:24] Skell Dagger stands across the canal from the great house and watches it thoughtfully for a moment. A golden gaze flicks over doors and windows, examining them as best he can at this distance. Good locks, he notes. But glass is always fragile…
[2008/08/21 20:26] Skell Dagger pauses to check his knives and pistol by the light of the gaslamp. A glint of silver, the gleam of black metal, and the flash of a mischievous eye, and then he strolls across the bridge.

Someone was in one of the residential homes in the ‘posh side’, and I was hoping to maybe entice them down to roleplay if they wanted to, which is why I stopped within chat range of their home and Skell started singing an old music hall song ;-)

[2008/08/21 20:29] You: A soft voice passes by below the rich windows, singing as it wends its way past: All me life I wanted to be a barrer-boy, A barrer-boy I’ve always wanted to be, I’ve got me papers – I carry them with pride; I’m a coster, a coster, from over the other side. I turned me back upon the whole society, And gone to where the ripe bananas grow. They’re only a dozen a shilling – That’s how I earns me living – I oughter been a barrer-boy years ago, Gerroff me barrer! Oh, I oughter been a barrer-boy years ago.
[2008/08/21 20:30] You: Nobody within notices the sharp eyes glancing at locks and windows, but they’re there. Quick and eager… and disappointed. Well damn and blast it.

Nobody within came out to roleplay either. Ah well.

Skell walks into the small park, but doesn’t see the woman sitting hidden by the shrubs and bushes (a failing on his part, since he’s supposed to be so sharp-eyed!)

[2008/08/21 20:31] Mabel Tunwarm hears the voice and the rustling of coats as the figure passes. Her fingers move to her temple to calm the ever-present twitch.
[2008/08/21 20:31] Mabel Tunwarm concentrates on the strings of her violin, keeping to herself.
[2008/08/21 20:31] Skell Dagger looks up. Sunrise already? Well that’s the end of his nocturnal duties, he supposes, and he hops onto the wall for a well-earned rest.
[2008/08/21 20:33] You: Looking up as the airship glides silently overhead, Skell spots something else moving, something that had managed to keep itself hidden from his normally night-sharp gaze. A woman? “Chilly morning to be sitting out here, Miss,” he remarks.
[2008/08/21 20:34] Mabel Tunwarm watches the sky lighten with each moment. The smells of the morning drift past her nose causing a seldom seen, genuine smile to form on her lips. She breathes the scent in deeply, letting her shoulders relax, her arms, her body….but then stiffens with the sudden sound of a man’s voice.
[2008/08/21 20:35] Mabel Tunwarm looks only slightly over her shoulder, gathers the volume of her skirts and hurries off.
[2008/08/21 20:35] You: When no reply comes, Skell cocks his head. Well, she won’t be the first dead ‘un he’s come across at dawn, but this one looks more like a proper lady, not one of the old gin-soaked birds from the lower side.

Characterisation: Although the reference to dead’uns and gin-soaked old birds indicates that Skell has found the occasional dead old alcoholic woman on the shady side of town, it also gave me an idea for a BIG bit of backstory: he’s not been ashamed to rob graves in the past. Now that took me by surprise!

And that’s the end of the log :-) It was short and sweet, gave me a nice introduction to the sim (I only wish it had stayed around longer, since it was an amazing build, especially the old buildings of the shadier side of town), and by the time it was done I had more of a handle on Skell’s character and backstory. This is when it all goes right.