Throughout this series I’ve been mentioning Medieval- and Shakespearean-themed roleplay sims, and for a reason. The Roleplay 101 series was birthed as a ‘How To’ series of notecards when Daros, Rannon and I (and a couple of alts) were playing in just such a sim. I’ve expanded on them greatly in these posts, but that was their genesis.

In the previous post I mentioned that I would be posting a few (edited to change names) old roleplay logs and analysing them. Some may be really good logs, but most will be (wittily-annotated) examples of the kind of roleplay one bumps into in Second Life. By the time you’ve read a couple of these, you’ll know why Daros and I are so.damn.happy when we find a good roleplay location that contains some good roleplayers. Sad to say, this particular log contained a lot of the bad stuff. I’m quite sure everyone involved (us excepted, later in the log, and you’ll see why) was having a whale of a time just sitting around, chatting OOCly and complimenting each other ICly on their outfits. Suffice to say, this is one log that I will label: DIRE.

This is what Skell looked like when he was playing in this sim, back in 2008: 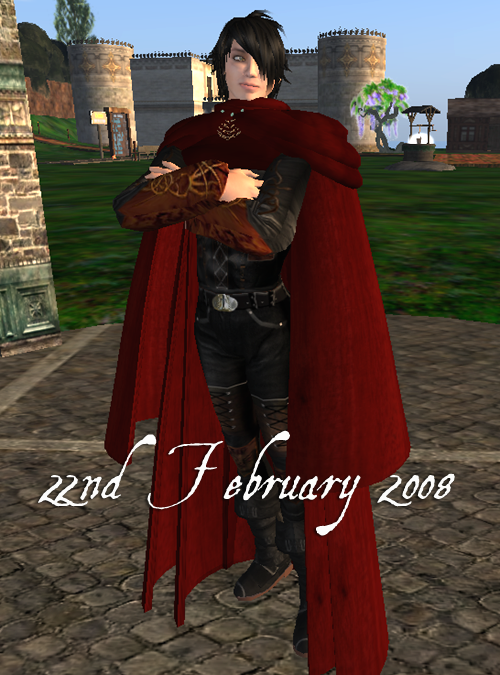 What a sweet and innocent lad!

Daros, Rannon and I were trying to interweave several storylines into this Medieval/ Shakespearean/fantasy sim. When we first arrived, there were two factions, and Skell joined one of them as the young Lord who would inherit the family estate. Daros and Rannon came in as a pair: Rannon was a soldier making his way back home from the wars, and Daros was his young manservant, with a twist: he was also a Fae, but kept it hidden. When he was stressed, he sprouted beautiful big wings, which distressed him enormously. It was a fun, innocent role, and he played it to the full. Meanwhile, on alts, Daros and I had a sub-plot going: his character was an evil male witch who wanted control of one faction, and was going about it through bewitching Skell, and I brought in a mercenary alt whom I played as the witch’s cousin.

All names have been changed, for obvious reasons. (Skell doesn’t actually appear in this log, as I was playing Ghis.)

An En Garde tournament is taking place (as it always did; the entire sim seemed to revolve around that damn game!). On landing in the area, the greeter whispers the following:

A strange mist moves across the land,passing through it you feel your inhibitions lift. Inexplicably you are drawn to the sounds of revelry in the forest as if gypsy blood runs hot through your veins: dancing, singing and merriment await!

The women in the sim were all wearing silks (and yes, we soon realised that was the excuse behind the ‘lower your inhibitions’ fog). The men mainly wore their usual pants and boots, but were bare-chested (big woop). I actually found a screenshot that I took on the day (names blurred, for obvious reasons). 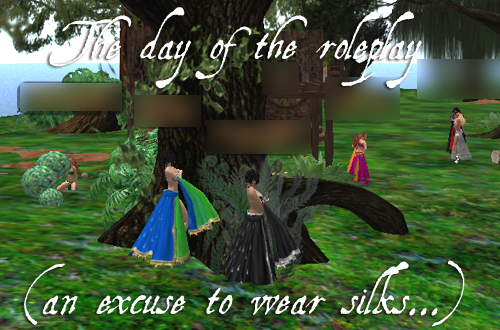 I’ve left in some ‘amusing’ OOC chat (highlighted pale blue) and the En Garde chatspam (set to dark grey so it doesn’t distract too much) because some of the interactions were in response to that. My own (somewhat jaded and waspish… okay, bitchy) remarks are in orange. IMs that are pertinent to this RP (when they arrive) are in green.

Incidentally, neither myself nor my character of Ghis are misogynists, before that gets huffed about. This is an in-character roleplay set in Elizabethan times. A woman’s role truly was obedience to the men around her back then (and not in the mildly-kinky and usually titillating definition of ‘obedience’ that is found in SL). Yes, you would find the occasional fiery female (the formidable Bess of Hardwick, for example) but – unless you’d stumbled into some Shakespearean enclave of independent women (the Greenham Common of its time, perhaps?) one would not discover a whole village full of them. Especially ones that fought and sparred with weapons. Ghis’s reactions in this log are merely a reflection of the realities of that era.

NEVER ARRIVES (Yep, because he saw Ghis – who is a big, hunky guy – arriving and talking to HIS HAREM OF WIMMINZ)

And there it is. The opening gambit…

Pay attention, Dear Reader: THAT is how you ‘mind-read’ in roleplay – when you have a character who could concievably do such a thing (eg: a fae) and you then mention it as a possibility (“…as if he can hear some of those thoughts…”). The kind of mind-reading that I bitch about is when someone thinks something and someone else frowns in response to that thought, when the frowner has no IC mind-reading ability.

And, finally, she gets to the point…

Oh no, honey. You leave me out of your petty little squabbles. I deflected this as politely as I could.

And there, I’m afraid, is where my five-year-old log cuts off, and I’m not digging through three old backup drives to find where it continues ;-)

So, Dear Reader, spot the actual roleplay (which would be the thing that contains dialogue and plot and suchlike). And remember: this was on a themed occasion in the sim, which was pre-planned as a ‘roleplay event’. What eventually happened was that, if Ghis and Zin hadn’t shown up, the only thing people were doing was blandly reacting to other people while they watched a game. Someone cracks a joke, someone else giggles. Someone wins a game, someone else claps. Someone mentions they feel woozy, someone else makes an innuendo in reponse. Even Daros had very little to work with, but was doing his best to inject some life into the scene before Ghis and Zin showed up. Knowing his roleplay as well as I do, I can tell from his poses that there was nothing at all going on in the scene to interest him; he was hanging on grimly until Ghis showed up.

From memory, the only decent RP scenes I had there were mainly with Daros and Rannon. There was one good scene where we finally managed to involve everyone in the captor plot, and it was actually brilliant. AT LAST people ‘got it’ and everyone was joining in. Poses were tumbling out all over the place in the tavern and I dared to hope that we’d finally struck a spark to enliven things up. And then, during the course of the scene, Zin showed up (as he had to at that point, because the scene was beginning to go round in circles and we wanted to keep it moving forward) and Keef’s instant knee-jerk reaction to Zin’s presence (seriously, he clearly disliked having an evil witch character in the sim that he’d built an evil witch hut in the forest for) saw him ‘hear something dangerous outside’ and go rushing out, followed – one by one over the course of ten minutes – by everyone else.

Zin and I continued for a while on our own, and when we finally exited the tavern… everyone was watching an En Garde game. *sigh* At that moment, we realised that ‘roleplay’ sim was a lost cause.

This sim was promoted as a roleplay sim. Like so many other RP sims before it, it began with a few small homes that could be rented (of a necessity, since roleplay sims don’t pay for themselves and the owners need to recoup some costs as best they can), and eventually ended up (I believe) as an entirely rental sim, keeping the period theme. Much of the scenery (castles etc) was removed to make way for more rental homes, and the RP just… fell through. Not that there was much of it to begin with, because this was NOT a roleplay sim; rather it was a themed social sim.

Let’s analyse two separate bits from that log. First, some ‘social roleplay’ from the other players, with our poses removed and commentary attached.

So… what is actually happening here? Um, in short, a big, fat NOTHING. This is classic ‘social roleplay’. People are trying to keep it in-theme (note Never’s use of “nay” instead of “no”) but was that interesting for you to read? There is a lot of silent posing (people think a lot here, but won’t actually say what they’re thinking) and there’s a lot of mind-reading (Keef, especially, seems to want Verbena to articulate that thought, but his frustration at wanting to respond but being unable to leaves him posing a silent response, in the form of a frown).

When was the last time someone agreed with something you thought but never actually articulated? Yeah, I’d freak out, too ;-)

Where are the actions? This is dull. Dead. Flat. It’s people sitting around and chatting, as you might sit with your mates in a skybox and natter about a friend’s upcoming rezday party while you sort your inventories together; only they’re trying to keep a vague themed setting.

THIS IS NOT ROLEPLAY!

Dialogue and reaction, yes, but also ACTION. People do things. That reads more like an actual story than the piece above it does, even with the muddled poses that often come with multiple-person roleplay (it can be difficult to respond in a single pose to everything and everyone around you, especially when something else happens that affects you either when you’re mid-pose or you’ve just pasted your pose into chat).

*sigh* I know, I know. I’m just bitchin’ at some people’s idea of having fun. “Leave ’em be, Skell. let ’em do their own thing, their own way.” Yeah, eventually we did. However, looking at it from a true roleplayer’s perspective, so many so-called ‘roleplay’ sims are just this: they’re social sims with a theme. It’s incredibly difficult to find a ‘proper’ roleplay sim, where people believe in story and plot, and when you do find one with hints of that, you throw yourself wholeheartedly into it, praying that you’ll find like-minded people who enjoy weaving stories with you… and then, slowly, the social reveals itself or it creeps in. Hell, even the owners of Venexia recently introduced some drastic changes to the sim, because they realised it had turned into a social sim where people mostly sat in their homes and nattered in group chat. The changes worked: we finally have action in the sim.

Action is what drives every story you’ve ever read and been engrossed by. How many pages of a book containing no action, no conflict, nothing to strive for, nothing actually happening, would you read before you put it down? And action doesn’t have to be fights and raids; action can be simple things. Patting the pouch that hangs at your belt, with a smug grin…? That shows you have money; it’s an open invitation to get robbed! A grimace speaks worlds about your levels of despair and disgust. And doing/saying, rather than thinking/wondering gives other people something to react  to, rather than leaving them hanging and carrying the entire roleplay themselves.