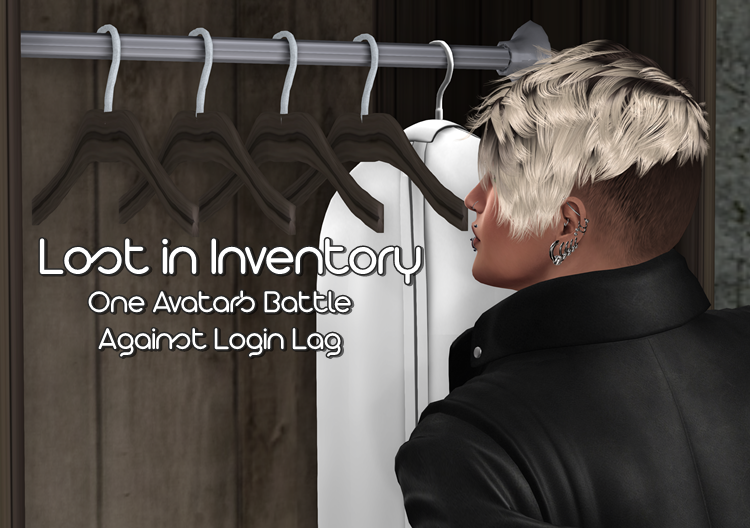 This one’s probably going to be something of a ramble, my sartorial darlings…

Long ago, in my callow SL youth (July 2009, to be exact), I created a comic called Lost in Inventory. (Click the image for the full-sized version.) 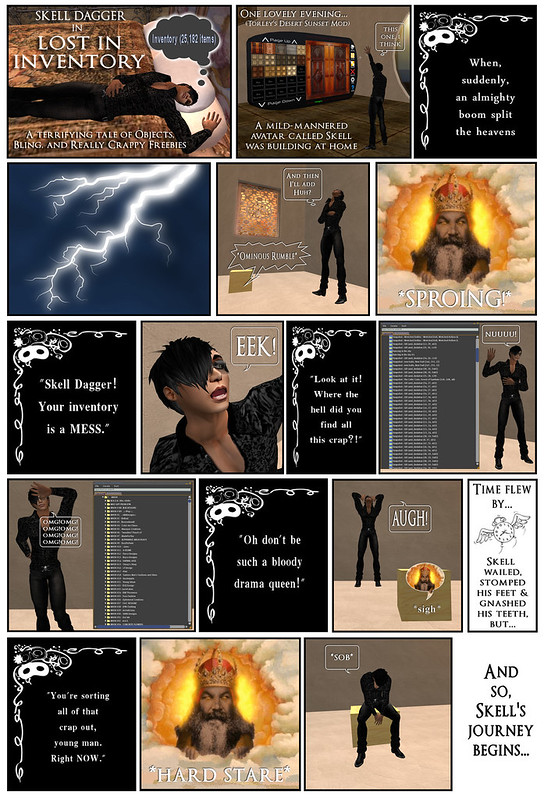 Ah, the folly of innocence. Those halcyon days when I regarded an inventory count of 25,182 items to be “too much”.

Ahahaha. AHAHAHAHAAAAA! *chokes*  Oh dear lord, that was a good one. My inventory count has now reached somewhat mythical levels, as evidenced by this response by Rhonda Huntress on a forum post entitled Inventory Cleaning, wherein someone asked “What’s your count at now?” –

I felt I needed to clarify, so… 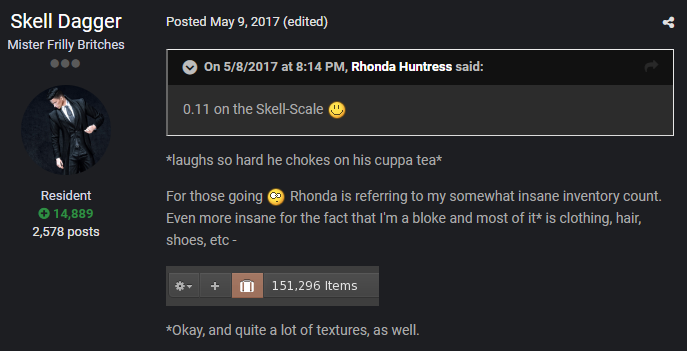 Erm, actually, looking at it in that light, yeah that is rather… um… excessive? Yeah, it is. It’s THIS excessive:

But eh, I’ve been slogging my way through it. I keep on top of deleting notecards, landmarks, unneeded scripts, and all of that other bumph. I box up (or delete) sizes of items that I don’t (and never will) wear, mainly because I don’t own those bodies and have no plan to own them.

But then someone resurrected that inventory cleaning thread, and Oz Linden was consulted on the rumour that a high inventory count can cause lag. In his reply, Oz said the following: 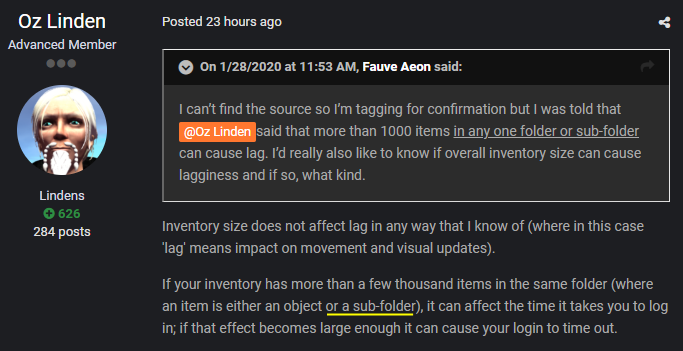 Note the bit that I’ve underlined. My eyes went straight  to that, and a millisecond later my brain went “Oh shiiiiiiii—”. Because—although I’ve been meticulous in avoiding having more than even a few hundred  items in one individual folder (for example: my Objects folder is immaculately sub-foldered)—my login each time can take upwards of a minute on Skell’s account. And that up there is the reason why: sub-folders also count as an item!

I am so so so careful to ensure that my inventory is sub-foldered, BUT in doing that I make use of the system folders that we all have: Body Parts, Clothing, etc. Inside Body Parts I have sub-folders for: Mesh bodies > Brand Name > Body Name, and Mesh Heads > Brand Name > Head Name, and so on. But some of those sub-folders contain a lot more  sub-folders. So—armed with this startling new information—I took a closer look at Skell’s inventory. And I didn’t like what I saw:

Well… crap. The second number on each of those lines is the number of sub-folders.

So, since that long login is starting to worry me, it’s time to change tactics and overwrite twelve years of muscle memory. I’ve always set my inventory to have system folders at the top, but it appears that I need to move some of the sub-folders that are inside them… outside  them. And rather than having them below everything else, I’d rather have them in with  everything else. Luckily for me, I’m not someone who is all that resistant to change (leaving aside my initial reluctance to move to mesh heads, because that’s a joke in and of itself these days), so once I’ve come up with those initial folder names it’ll just be a matter of switching off that System Folders to Top option and getting used to the new folder position.

And then… there’s BOM. Has anyone else’s inventory just exploded  now that we have 30 individual makeup tattoos instead of one neat little 30-button applier HUD? I’m not knocking it; I love the versatility of BOM (and I’ll love it even more once a couple of specific skin creators update for it), but dear god my inventory was inching dangerously close to 200k as it was! Let’s just take a look at what BOM can entail. Below is one ‘head skin’ and one ‘body skin’ from Birth, in applier format: 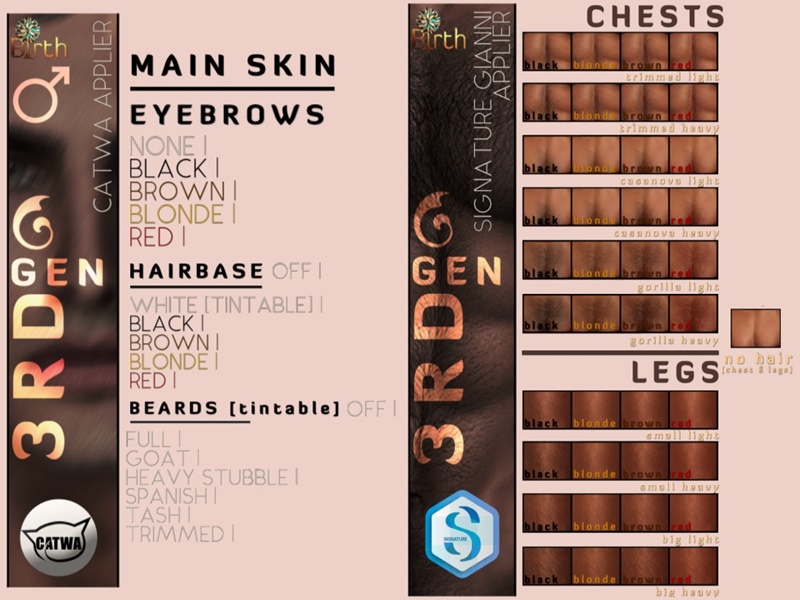 And here is the ‘head skin’ in tattoo format: 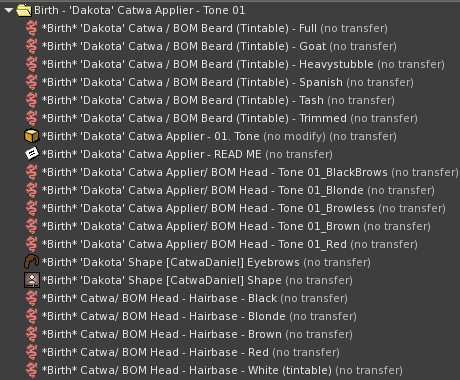 Followed by the body skin, also in tattoo format: 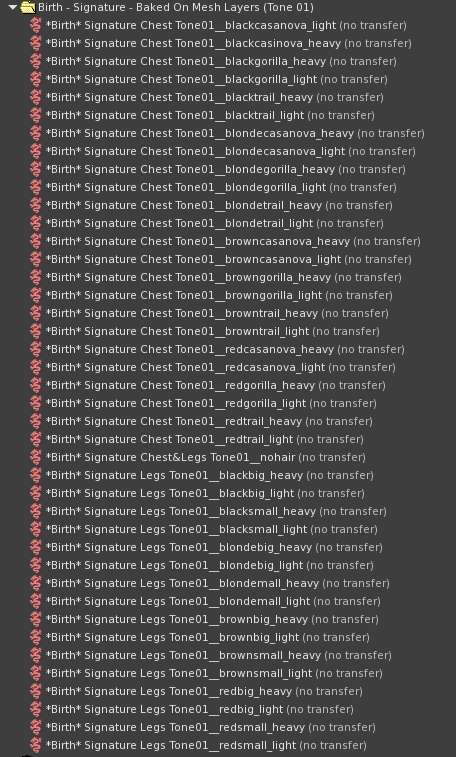 Thats going to need some trying-on and boxing up of the stuff I’m not going to wear, because I’m not lugging all of that around the grid with me! Unlike many guys in SL, I change my look all the time, so there’s a strong possibility that I’ll have black hair one day and red the next. The damage limitation option for me is to just box up the versions that—based on past history—I use very infrequently (for example: Skell hardly ever goes blond) and keep the ones I’m more likely to use.

So what do I do already to try and keep my inventory in order? Because posts like this should contain some inventory-sorting tips, right?

The first thing I do is have a monthly folder structure outside of all my other folders. As a blogger, it’s crucial that I know where I got something from, so I have sub-folders for specific events, and then weekly sub-folders for everything else. Review copies, Marketplace purchases, demos, and gacha items get their own sub-folders within the monthly folder. As I shop an event I will move everything purchased from that event into its sub-folder (thereby ensuring that if I crash during teleport—which sometimes can happen when leaving a very busy location—I don’t have to dig my purchases out from my objects folder). Event demos go into a !DEMOS sub-folder for the event. I don’t unpack anything there and then, and I never demo while at the event (mainly because when I demo I can spend hours going through multiple items to see what works together). 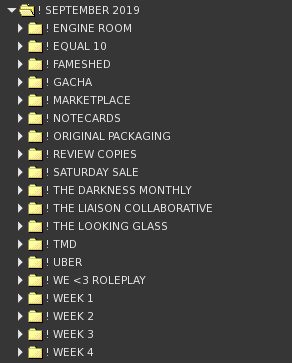 After every shopping session I always—without fail—do the following for my new purchases:

No matter whether you’re starting with a small inventory (hello, alt!) or staring bleakly at an absolutely chaotic morass  of crap, the above small tips—performed after every single shopping session—will drastically reduce the amount of potential junk that you could be adding to your inventory.

Want some more quick tips? Open your inventory and search for the following:

That will cover a multitude of “delete me” unpacker scripts, bag-holding unpacker animations, pose/posing/adjustment stands, and “thanks for your purchase!” notecards. Delete with extreme prejudice. You don’t need them!

Go into your Notecards folder. Scroll down to the bottom. How old is the oldest one? Right, do you still need that notice about a 50% off sale from 2012? Thought not.

How about your Landmarks folder? Is that a heaving mass of once-was-a-store-but-is-now-estate-land-for-sale? Get rid of the lot. Next time you need to visit a store, right-click an item you already own from that store, go to the creator’s profile, and visit from their picks. Once you’ve been there, use your Teleport History option from thereon in.

Now… I just need to persuade someone  to stop shopping, get off his pert-but-lazy arse, and DO SOMETHING about this. 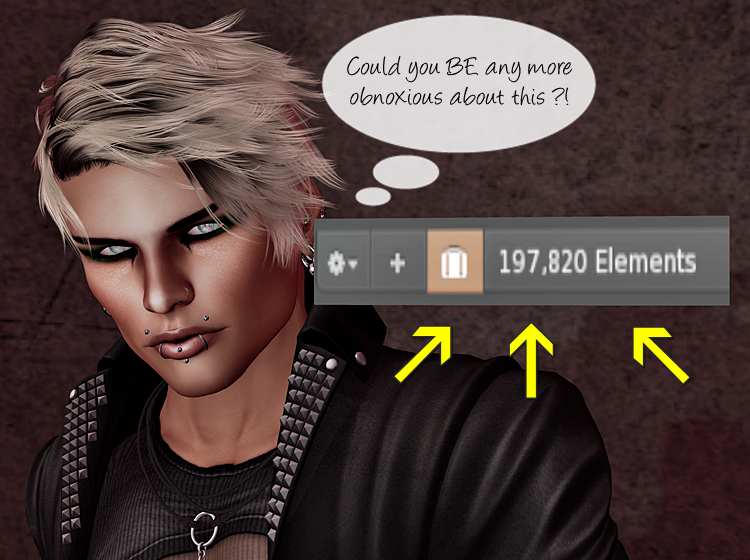 4 thoughts on “Lost in Inventory: One Avatar’s Battle Against Login Lag”