There was only one way this was going to go, once I’d got that white-collared shirt on and happened to try on the sunglasses as well… 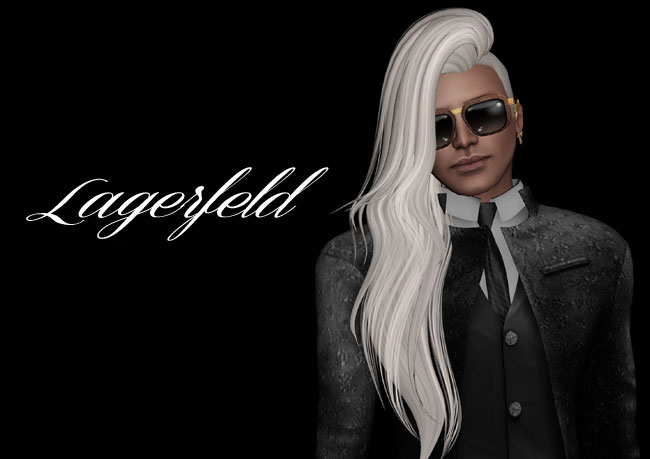 Yeah. A high-collared (well, high-ish, in this case) white shirt, and stylish shades only mean one thing to me: the inimitable Karl Lagerfeld. I originally had black hair when I tried on this look, and after a bit of squinting at the screen, I gave a delighted little howl at Daros, who was also trying stuff on with me:

Okay, details! This gorgeous jacket and shirt combo is a new release from A:S:S Decades, out at We <3 Roleplay this month. I love the hell out of this. It’s elegant and slightly starchy, but it’s got a buttoned-up sexy edge that really  appeals to me. 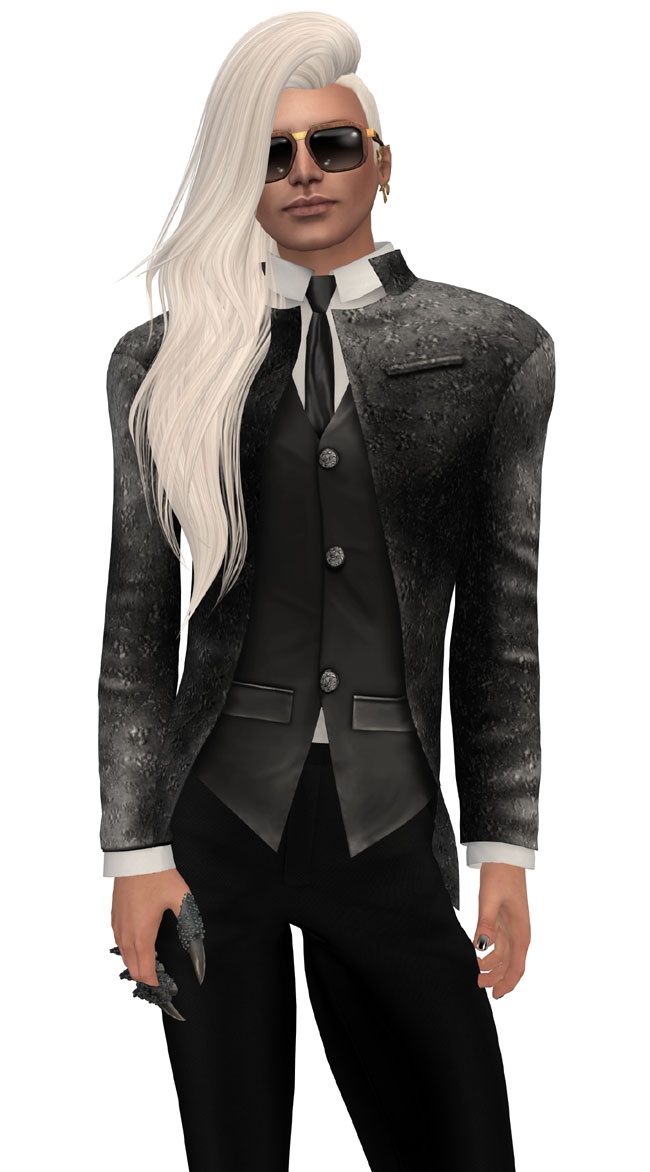 NOTE: If you’re not wearing waist-high pants with this jacket, then you’ll need some kind of shirt underneath it, as that little bit at the base of the vest shows bare skin otherwise. (I’ll admit that’s kind of hot, but for this look I wanted a little bit more formality.) I used a white jacket layer shirt that I had from SF Design and tinted it slightly darker, to match the shirt collar.

The shades are a current gift for SORGO group members, in group notices. The group costs L$150 to join, and these glasses come in four versions: clear glass and sunglasses, and in both display and wearable versions. This wood version is a preview from the full set that will be released soon. 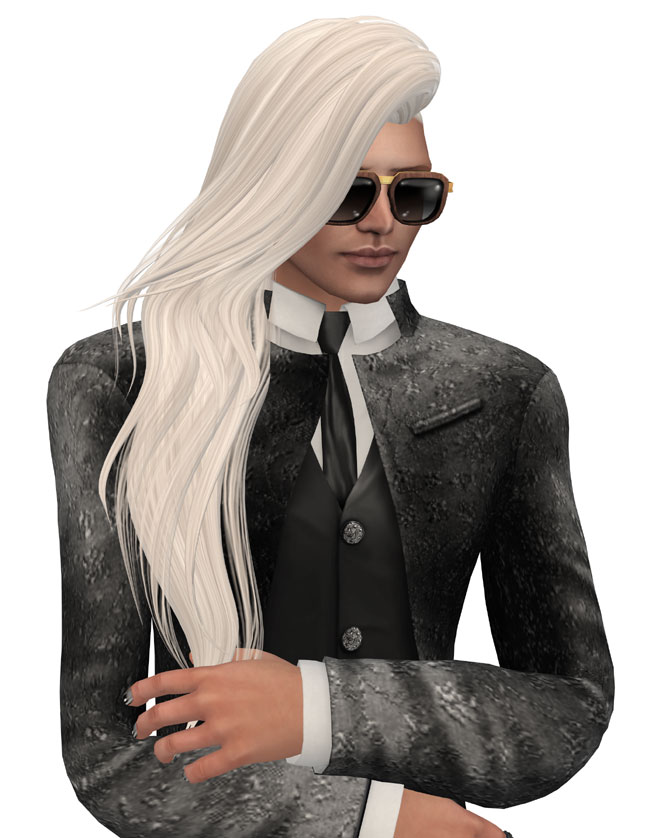 The hair is from Exile, and it was out at last month’s Collabor88, so it should now be in the Exile mainstore. I adore this style, and I’ve only taken it off my head in order to demo a few other hairstyles since I got it.

The (manually resizable) finger claws are from Goth1c0 at the Dark Style Fair (runs until May 31st). I highly recommend  this fair. It’s been absolutely crammed every time I’ve visited, but there is some awesome stuff available there, so it’s worth braving the lag soup to look around. You can find a map, store list, and SLurl here. Guys, the blokey stuff is even marked on the store’s signs, as per this gobsmacked pic I put on Flickr yesterday ;-) 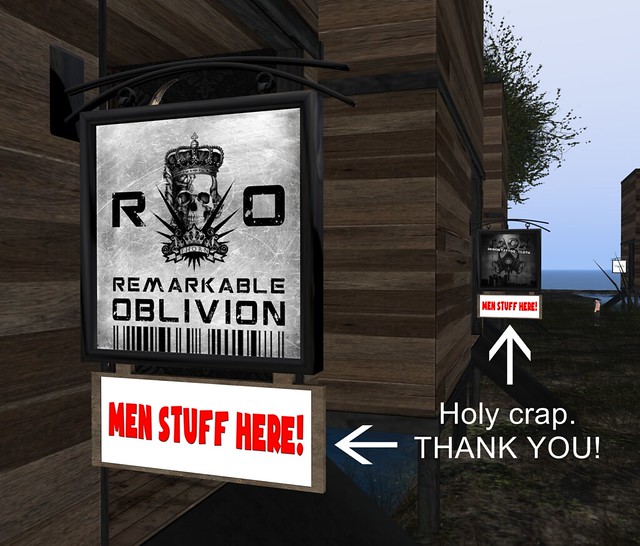 Be aware, though, that they have missed one or two stores that have male items, so—lag permitting—do poke your nose into each store just to check. From my personal experience, flying up above the build and camshopping is the best way to “get around”. On the ground, you’ll be rubberbanding like crazy.

Anyway, those claws! They’re individually resizeable (manually; edit linked parts and move/stretch/rotate each claw), and they’re unisex. All plus points, in my view.

The texture-change ear cuff is another item from Dark Style Fair. I ended up buying pretty much the entire contents of the Tabou Irresistible booth, and it was almost the highlight of the fair for me. They had some utterly fabulous  stuff. My one quibble with what I picked up is that (this ear cuff excepted) everything is script resize, and when it’s something as complex as a feathered-n-studded-n-chained epaulette… getting it to fit a big blokey shoulder can be a bit of a trial. But I’m nothing if not persistent when it comes to this shit. I’ll get it done ;-) 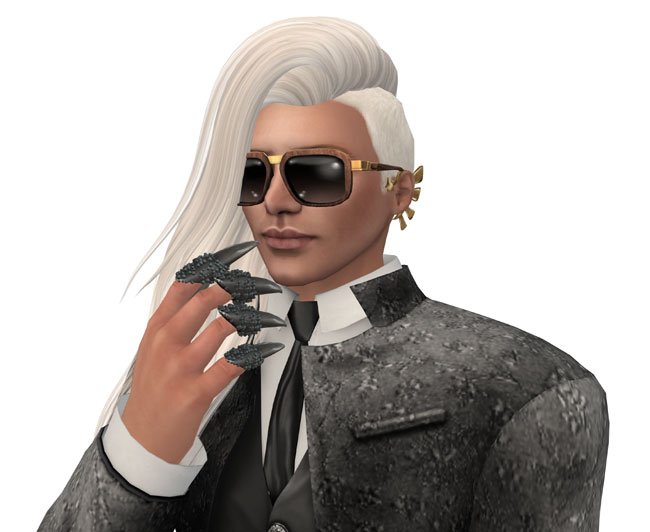 So then, of course, came the hunt for pants and footwear. I had these fabulous skinny-slinky unisex pants from United Colors that I picked up at February’s Mens Dept, so then it was down to footwear. I thought I might be a while trying stuff on, but whaddya know: the third pair of boots that I tried were perfect.  These boots from Pixel Box are script resize, and—while I couldn’t get a precise fit—the fit that I did get was perfectly good enough for me to be happy wandering around SL in them. 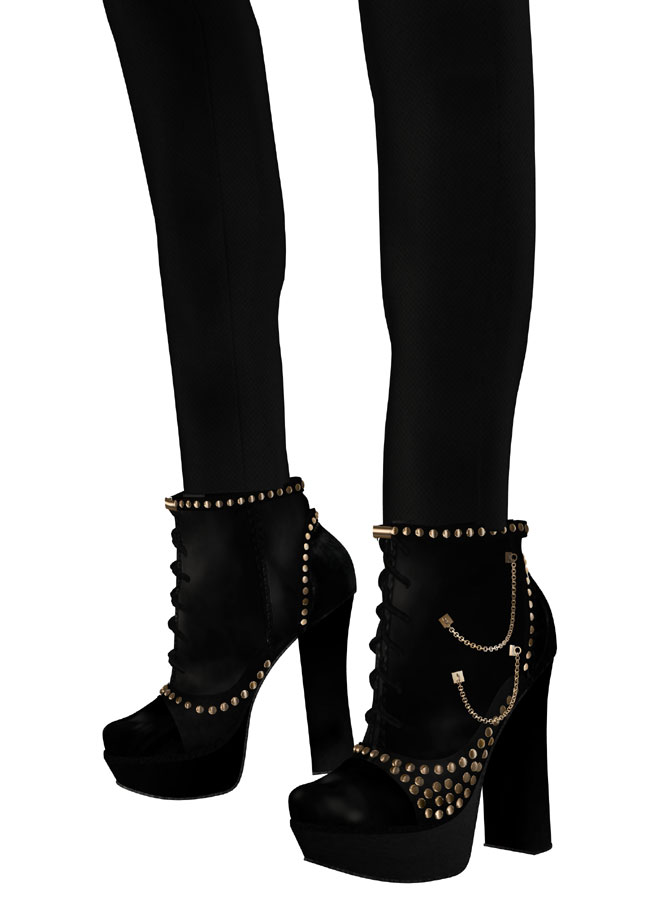 It’s been a while since I rocked the all-white hair. I was never out of it for about my first three years in SL. I feel like I’ve come home again ;-)

Hair: Exile – One Way or Another* [ kavar.cleanslate ] 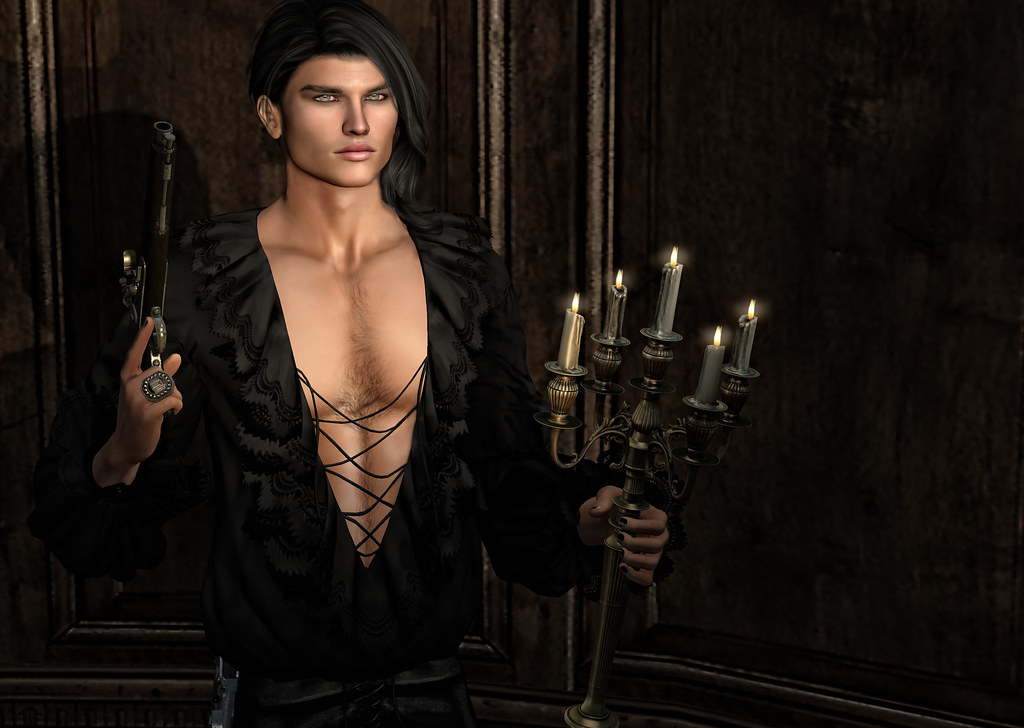 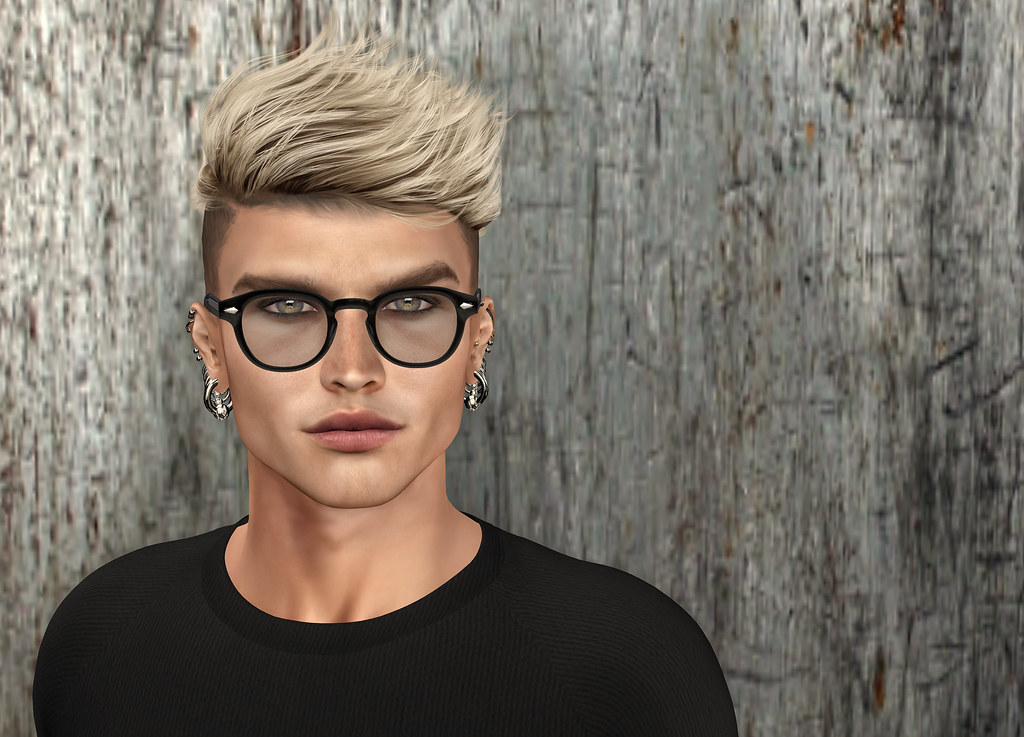 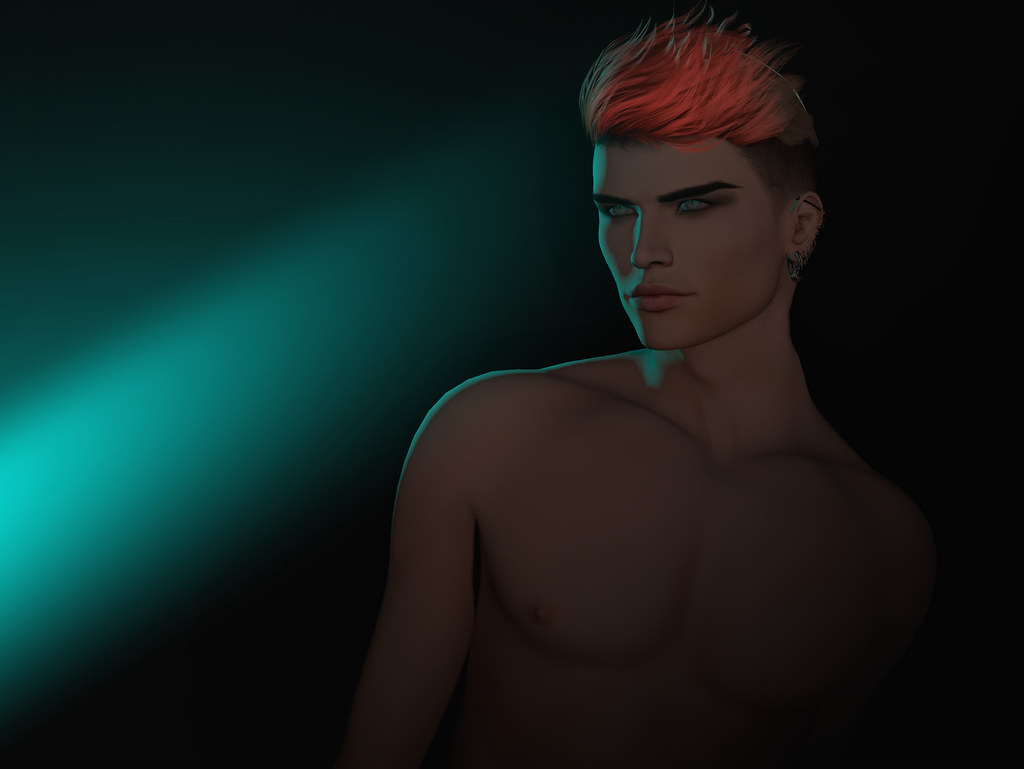 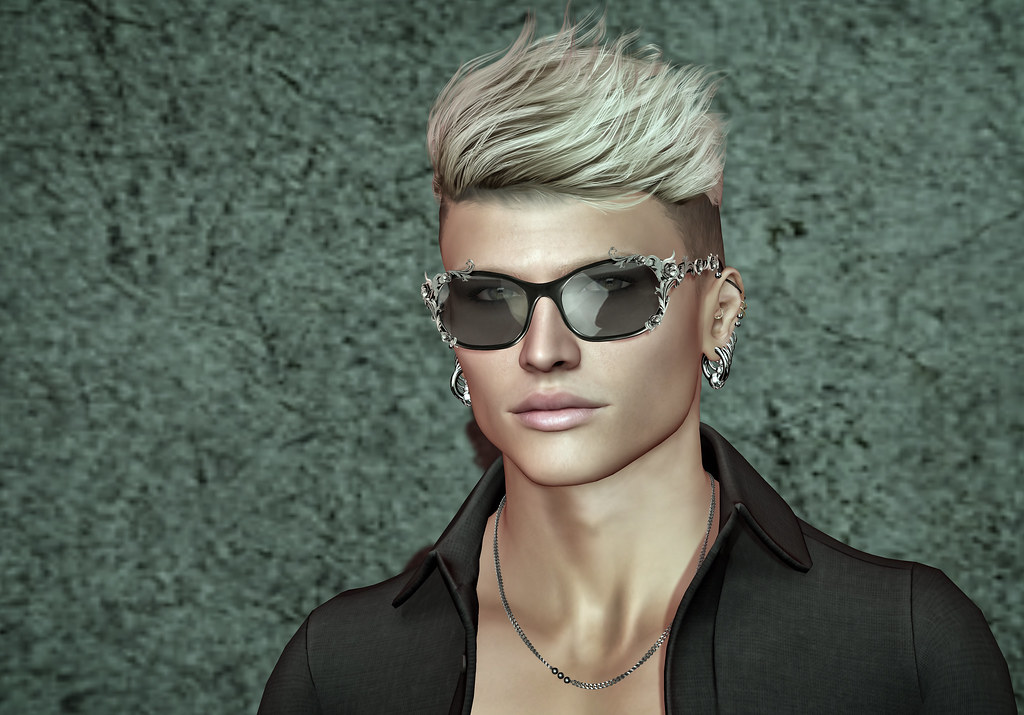 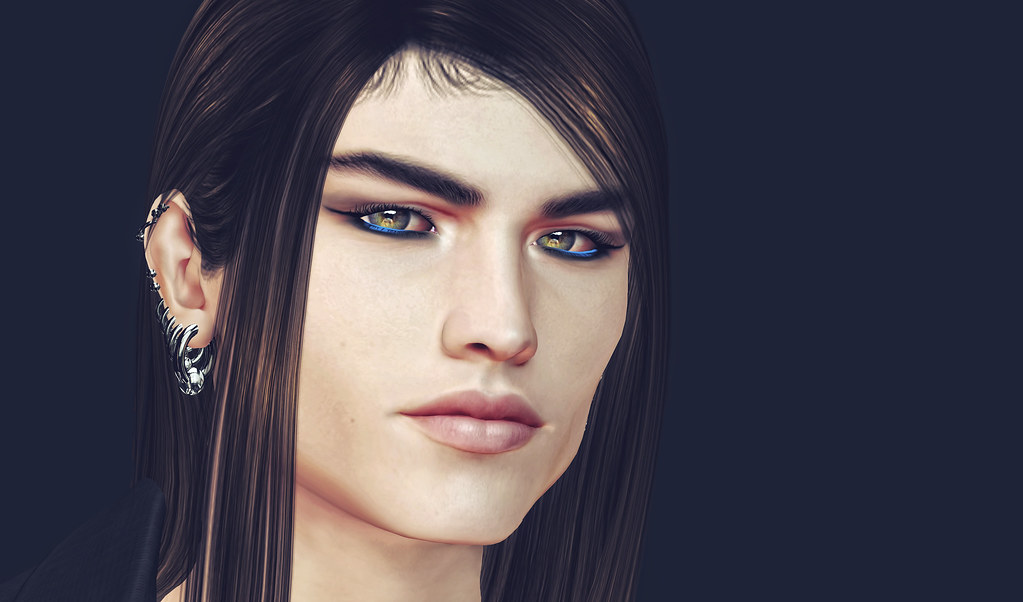 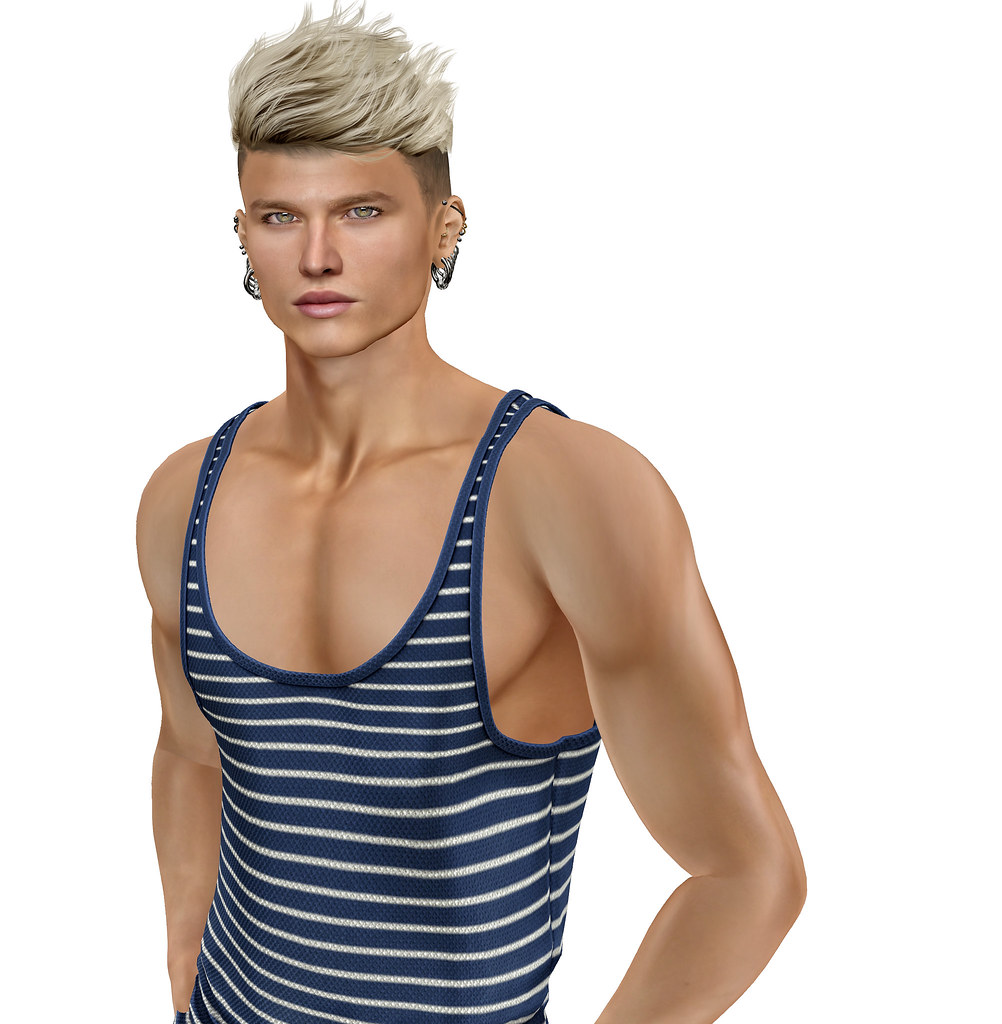 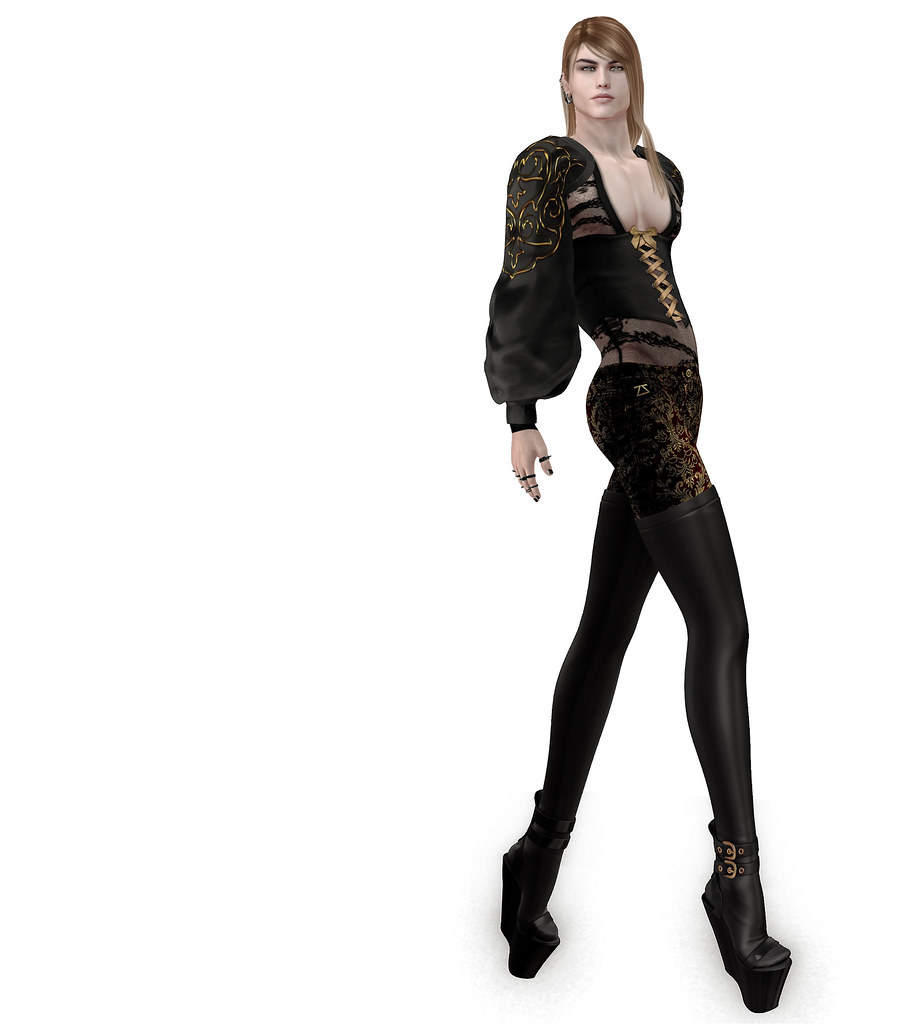