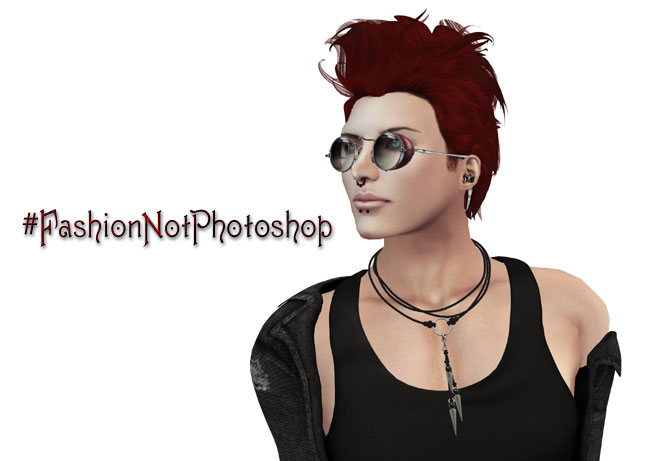 If you’re just here for the fashion, my sartorial darlings, then scroll down. I have a few words (okay, quite a lot of words) to say before I get to that, on the subject of blogging; specifically how I blog. This post will probably win me no fans on either side of the fence, but since when has that ever stopped me from opening my big gob and saying what I think? (Seriously, though: if this post makes you want to put me on some daft bloggers blacklist then I will laugh so damn hard  at you.)

There was a recent kerfluffle on Flickr between a designer and a blogger. In all honesty, and in my personal opinion, neither of them came out looking too handsomely from it all. The airing of dirty laundry in public – be it one’s own or that of someone else – is never the most elegant of things to do, especially when Linden Lab graced us with a ‘block’ button on every profile for the especial benefit of those that piss us the hell off. And, on the other hand, hassling for free stuff (and making veiled threats, whether or not you have any intention of carrying them out) because you have the privilege (yes, I said ‘privilege’) of being “official” ain’t too elegant, either.

Regardless, one thing I took away from that whole, somewhat unsavoury business was one sentence from the designer, in which it was mentioned that the blogger’s posts (and I paraphrase here, as I don’t recall the exact  terminology used) “hadn’t shown any improvement”.

Now look, my darlings. I know I’m only small beans in a big blogging stew over here, but – the classroom of basic technical skills aside – this ain’t a fucking final exam. Sure, as we continue to work we also continue to hone our skills with light and composition. We learn that – if our computers can manage it – taking 5000px snapshots is highly preferable to taking jagged-edge print screens. We – again, if our computers can handle it – wrestle with Windlight and Advanced Lighting to try and make our images as clear as possible (unless, of course, we’re going for dramatic effect). But do you know what we’re really  here for?

Fashion. Style. Playing dress-up. Whatever label you slap on it. That’s why I started getting heavily-involved on Flickr back in 2009. Once I got seriously into SL fashion there was no stopping me. I fucking loved  it. And almost all of my shots from back then were set against plain backgrounds. You know why? 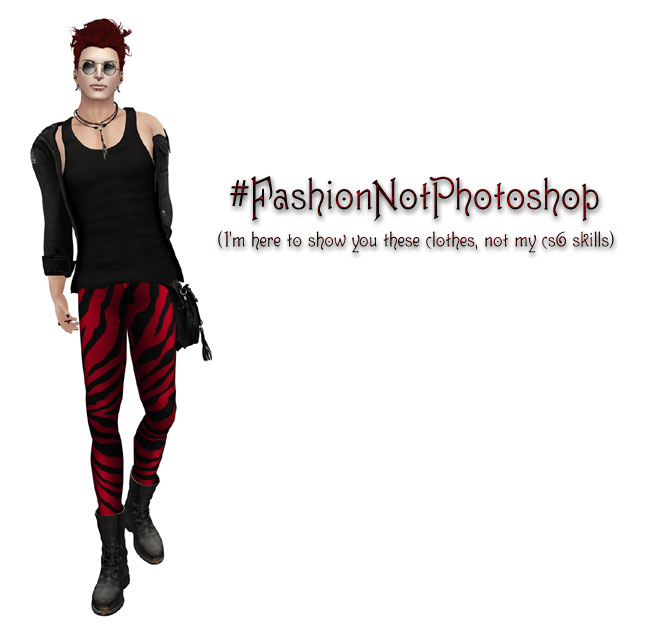 Yeah. I’m here to show you these clothes, not my CS6 skills. Not that I have CS6 (and that’s another thing that separates us small beans from the big stews) but I do what I can with my knackered old Photoshop 6.

(Keep reading, those of you that think I’m bashing bloggers who do  use a lot of Photoshop. I’m getting to that bit shortly.)

“Why don’t you upgrade, Skell?” – Well, yanno, I would, but you know how Photoshop costs about $700 in the States? Funny thing about tech, both hardware and software: what Americans pay in dollars, we Brits pay in Sterling. Right now, if I wanted to buy Photoshop CS6, this is what I’d pay for it: 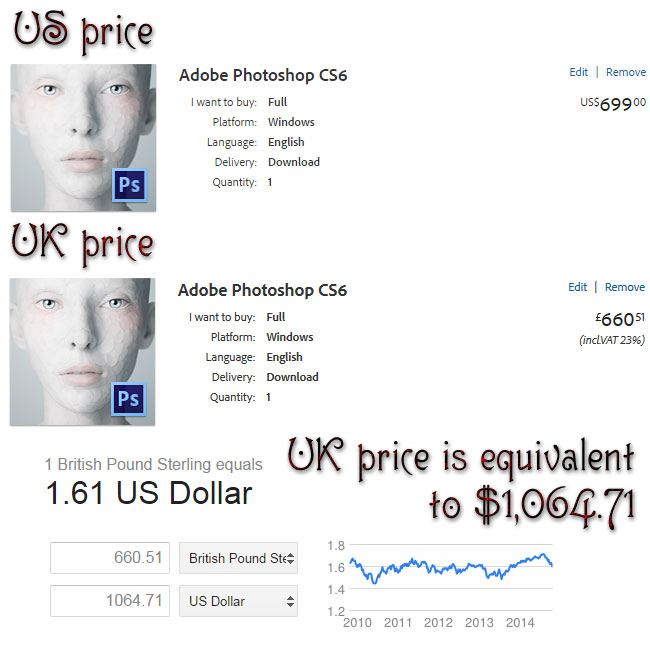 Yeah. I don’t think so. I’ve got better things to do with my money. Like pay my rent, put food on my table, and heat my house through the winter. Can’t sell my Grandma, either (both dead and the going price for corpses is really terrible  these days). And no, I’m not going the keygen route. Been there, done that in my sneaky past, and suffered the virus outbreaks that went with it.

This isn’t – by the way – an attack on those bloggers who have incredible Photoshop skills. I have nothing but admiration for the likes of Spyder Silverfall, who can make images so breathtakingly-real that I can’t hit the Favourite button fast enough on Flickr. It’s just that I sometimes feel that sometimes every blogger is being held up to that high standard; that – if we don’t constantly improve until we’re at that level – we’re not worth a second glance.

Let me just put that bit here again, in a quote box this time, because it’s the pivotal point of this post:

“It’s just that I sometimes feel that sometimes every blogger is being held up to that high standard; that – if we don’t constantly improve until we’re at that level – we’re not worth a second glance.”

Now, me personally? I don’t give a toss. You either take or leave what I have to offer, and what I mainly have to offer is fashion. Sure, sometimes I’ll come out with photoshoots that look pretty damn good. Sometimes I’ll write stories, play with shadows, set up backgrounds. But I’m here for the fun of fashion, not for the stress of spending hours  in an image-editing program, just to make one jaw-dropping image. I wish I had the skill. Moreover, I wish I had the time. Sadly, I have neither. My talents, such as they are, lie in chucking a bit of this and a bit of that together and coming up with an interesting look. Oh, and a lot of verbiage to go with it.

That’s just the way I do it. And, if that makes me not-worthy of a second glance, then look the other way. I’m over here, having fun and doing it myyyyy waaaa—

Uh, yeah. So, onto that fashion shit, okay?

Exile, oh Exile. Beloved Exile, whose strands I’ve had glued to my head for what feels like years. This is a new style for the current Mens Dept collection. Loose and mussy – just how I like ’em – it comes in more colours than you can shake a comb at (only please don’t; it’s too sexy to neaten up, ‘kay?) 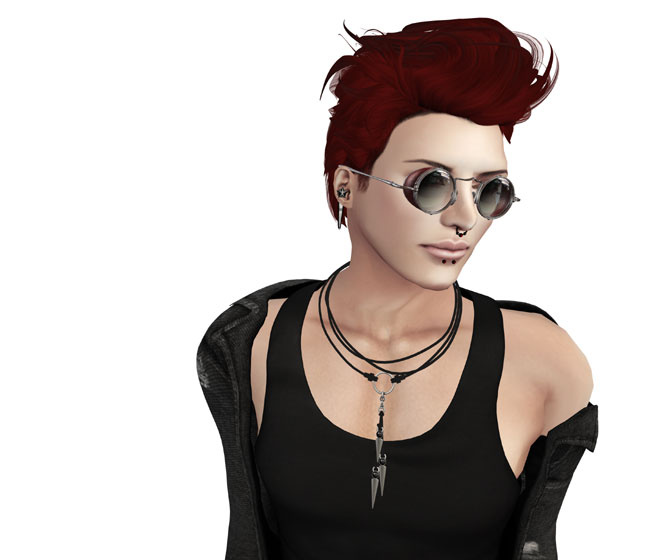 I seem to have these fabulous glasses from Haysuriza glued to my face lately, too. 80s Thompson Twins throwbacks with a vintage Gatsby edge, can we say fuckin’ awesome? I think we can. Same, too, about the Maxi Gossamer necklace (from last month’s collection at Uber, and now – hopefully! – in the Maxi Gossamer mainstore).

The jacket and tank combo is a recent release from A:S:S, with multiple colours available and a HUD to change the design on the tank. (Being Skell – Prince of Darkness [or something like that] – I had to have black, natch). And this ultra-cute little snake ring is by HandVerk, who just keep on getting better and better. I first discovered the store back in 2012, when I bought this fabulous silver arm fur, and I’ve continually bought little bits and pieces here and there since then. 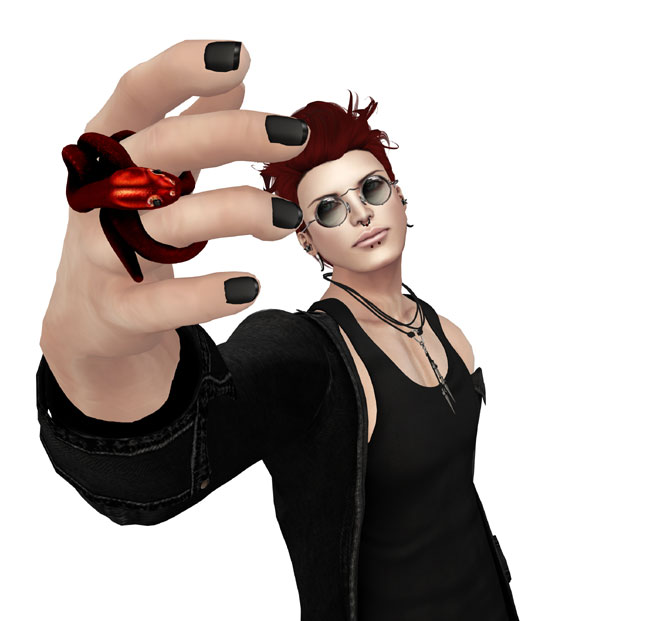 Yeah yeah, I know my FAQ says I don’t blog hipster stuff (seriously, guys, get rid  of that big fucking mesh beard. Yes, it’s an amazing bit of work, but my Flickr dash is starting to look like an episode of Captain Caveman) but hipster bags  are an exception. This little gem from Remarkable Oblivion was at a recent Mens Dept (and should be in the mainstore by now). Always good to have a pen handy, right? (Even if your Slink hands don’t have a ‘holding pen’ option, dammit.) 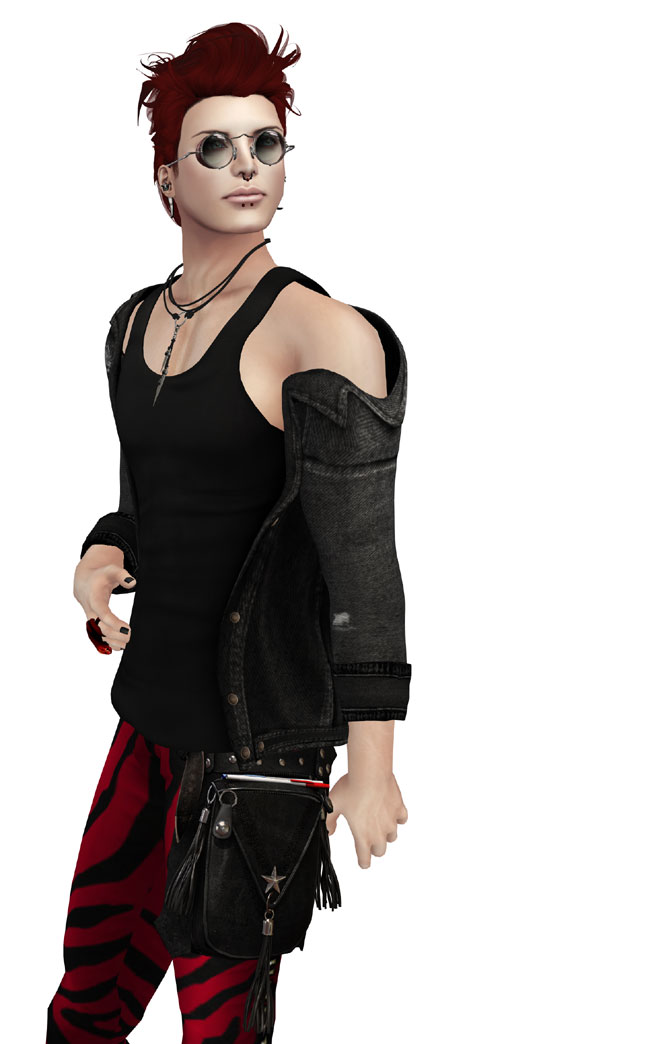 Pants, natch, from Sn@tch. I mostly skim Ivey’s notecards these days, as the majority of what she makes is mesh clothing for the ladies (and stunning stuff it is, too, don’t get me wrong). But every now and then Skell does a little seal-clap as system pants appear on the New Release list, and he legs it over to Sn@tch as quickly as he can. (And, believe me, that’s not a phrase you’ll hear said about him very often…) 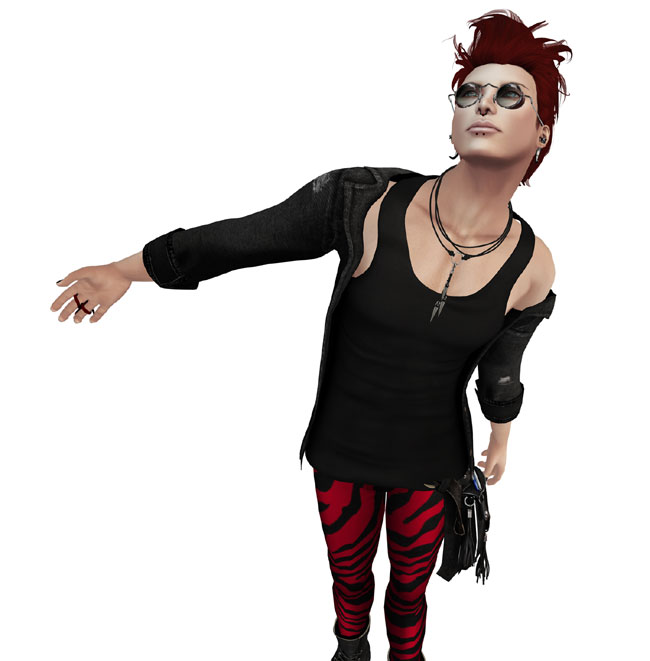 And, finally? Boots from Deadwool. I do appreciate a great pair of shitkickers, and these beauties have definitely been toeing through something unsavoury of late. Love the worn soles on ’em at the front. 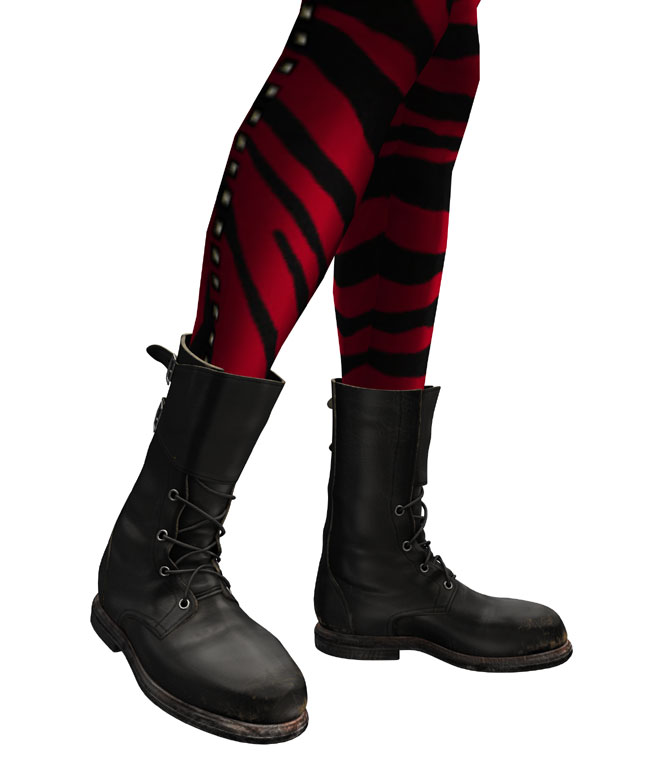 Yeah, lookit my lumpy legs. I can’t liquify with the best, but I can out-pout the rest ;-)