There’s an illness flowing through him
that’s there all the time.
And though he watches and he waits,
he knows he’s not to blame.
The face at the window, the hand under the bed.
Martin has hallucinations, dreams that he’s dead.
He finds the hunger’s at its worst when he’s in bed. 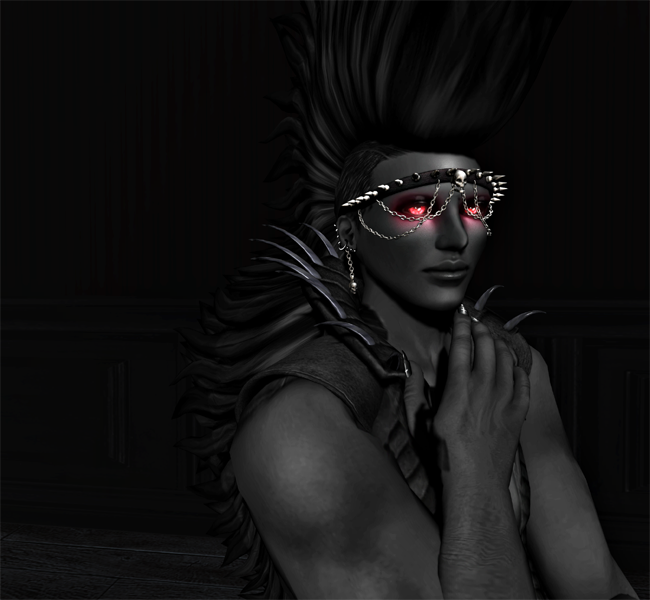 My internet connection is giving me FITS tonight. It keeps pausing and dropping and hanging and pausing. ARGH! Anyhow, hopefully it’ll stay up for long enough that I can make this bloody post (before I tear my hair out).

So, as I said in my preview image for this on Flickr: “I never stay normal for long”. Heh. I sure as hell don’t. This look was inspired entirely by the song I was listening to (before Spotify kept crapping out on me every couple of minutes thanks to that connection thing) this evening.

When Soft Cell first came out with The Art of Falling Apart  there was a limited edition gatefold sleeve that contained a second record (yes, my sartorial darlings; Skell is old enough to remember vinyl, and not the kinky kind). That second record was a 12″ single with a song on it that blew my fucking head off when I first listened to it – mainly because I first listened to it through headphones late at night and it freaked.me.the.fuck.out.

It was so scary and so terrifying and SO DAMN GOOD. And it was called… Martin. Yeah, I work with a Martin. Never looked at him quite the same way ;-)

We begin with this headband, which comes from a cheap-as-anything gacha machine at the Death Row Designs mainstore. I can’t remember how much it was (and – with my connection this crappy – I daren’t risk a teleport) but it was something like L$10 or L$20 per play. All the prizes are amazing. 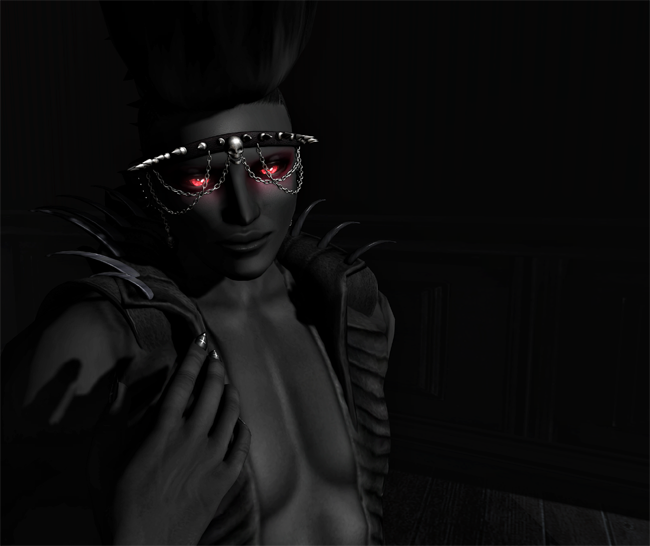 (Seriously, that pic just took almost a minute to load for me after I’d pasted it in. Ugh.)

Anyway, if you think the headband is awesome, I’m gonna pull back and give you a sneak look at the hair, which is… well… 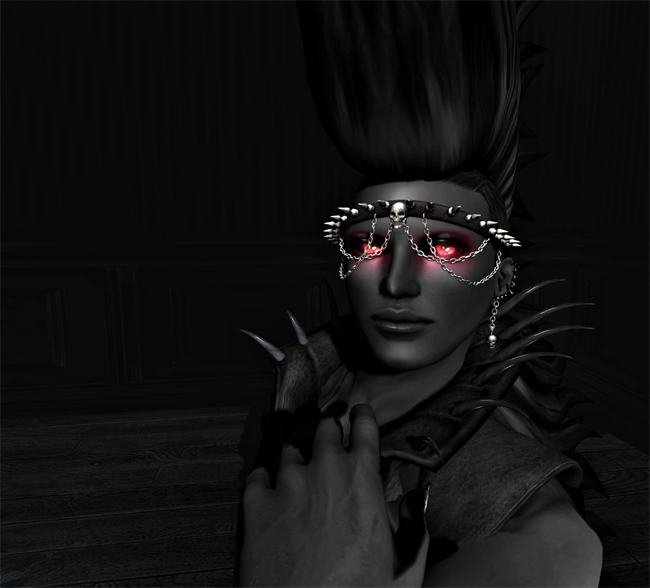 Yeah. It’s high :p You’ll see just how high in a second. But first, the eyes and skin.

Whenever I want creepy or unusual eyes, my first stop is usually Negaposi or Rue, and I bought the full pack of these Creature  eyes from Negaposi a while ago. They have an amazing glow to them. The skin was by Tableau Vivant at a recent Fantasy event. I quail at wearing a skin called Kevin  (sorry, all Kevins out there!) but there it is. I bought every colour that was at the event; they were that good. This one had red shading around the eyes (which is tempered slightly by the fact that I’m also wearing heavy eyeliner and shadow). They also all came with Slink appliers for hands and feet.

OK, the hair. You ready for this mind-blower? This. Is. Awesome. 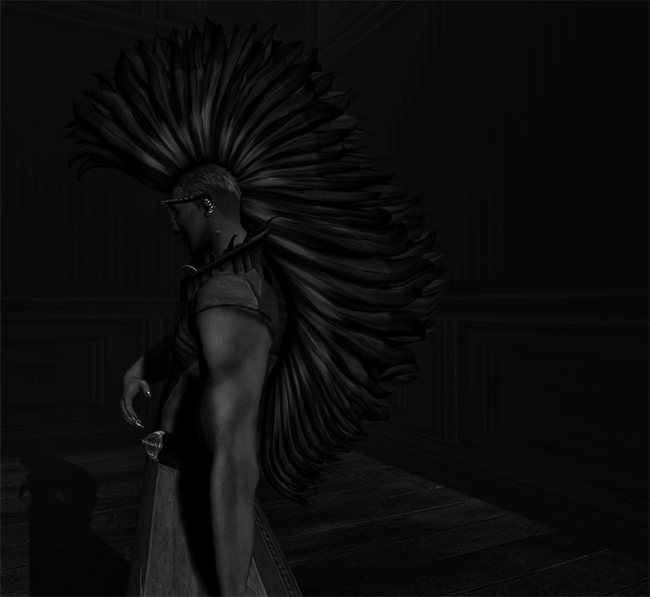 It’s Curio Obscura, it’s colour-change (loads of colours in just one style; simply click and pick), and it’s mesh, so it moves and curves with your spine. Oh my god, it’s inSANE.

The outfit is by Trap, and it’s good old clothing layer and sculpts. I picked it up at the Final Fantasy Fair a couple of months back. I love the open spiked collar and the flared, buckled pant cuffs (the latter of which I just realised I haven’t taken a picture of. Oy vey, and I’ve logged out for the night now, too. Doofus!Skell strikes again! Trust me; they’re great). 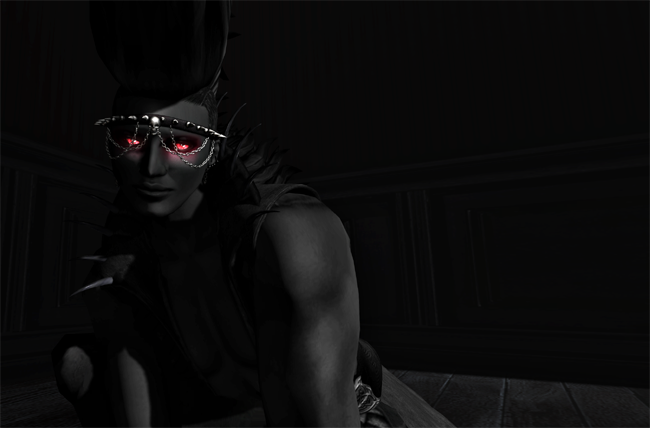 I’ve gotta give you another view of this hair. 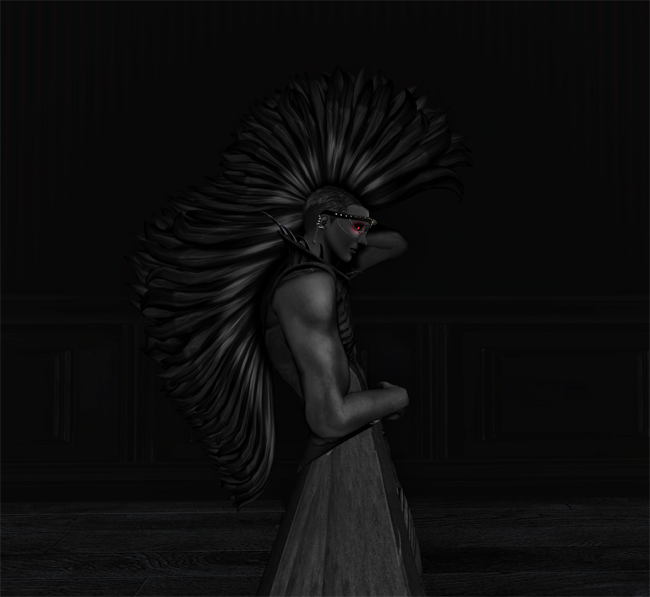 It’s rare for me to set the nails on my Slink hands to ‘pointed’, but this look merited it. Appliers are by *By Snow*.

Makeup: 22769 – Visage Guyliner [ mondra.kira ]
this is black; the redness around the eyes is on the skin itself

Here, scare yourself silly with creepiness and screaming ;-)