I came across Mr Freebie while I was in SF Design the other day. I meet him now and then, in various forms, but he’s most frequently in the guise of Mr Long-Haired McSteroid-User, bearing the following traits:

Massively-muscular torso and thighs
Tiny head (mainly because of the relative size to the rest of his body)
Too-short T-Rex arms (seriously, how does he pee?!)
Long, floufy black hair
Open shirt (often denim)
Undone jeans (oh god, just… no. Those freebie ones are NOT sexy)
Enormous boots, oversized to fit over his huge calf muscles
In-yer-face black tattoos all over his torso
That godawful ‘photorealistic Steve’ resell skin

And this chap wasn’t much different. I got only one screenshot, because his (freebie) AO kept him twitching and moving around all over the place: 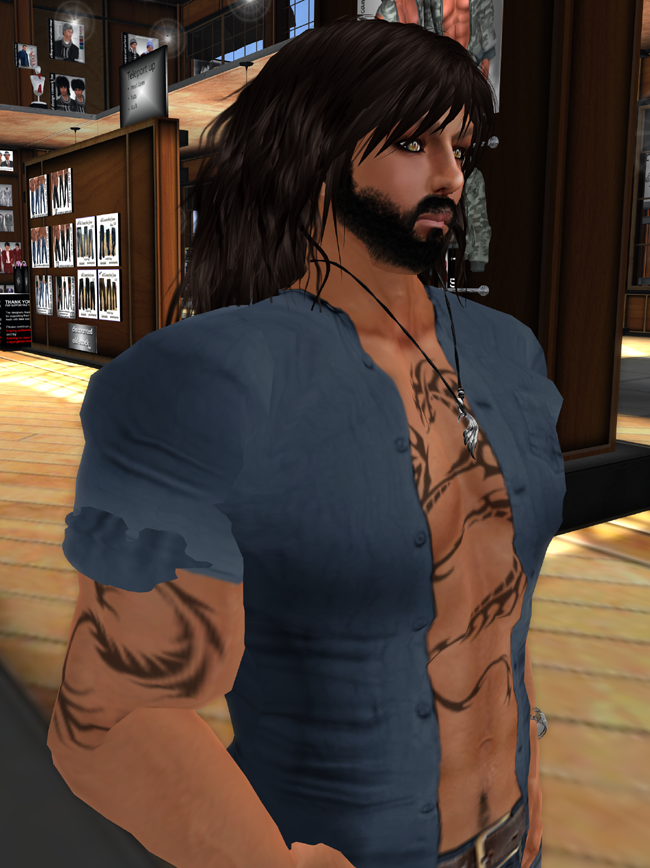 He actually looks better than most of his fellow Mr Freebies. His jeans are done up (and even have a belt) and he’s at least not wearing that ‘Steve’ skin (although the face on the skin he is wearing is very feminine and gives a strange contrast to the ultra-masculinity of his torso). He wasn’t all that new (several months old) but he probably has other things that concern him more than adjusting his prims…

The guy in the background of this shot (I recall that his avatar was about three years old at the time) is a far more typical (horrendous!) Mr Freebie than the one in the pic above:

Back to our first (less-awful) Mr Freebie, yes it’s all free stuff. The eyes are from a free KMADD pack at FabFree, the necklace is a freebie from Gabriel. The hair looks to be a Damselfly ripoff, and the tats are definitely free (at least they’re not those godawful jet black ones you see in resell stores).

Bless his heart, he’s trying, but I wishwishwish I could have just given him a hug, taken his hand, told him to dig up $10 from somewhere (forego a couple of morning coffees or his newspapers for one week) and taken him around a few stores. $10 would get him roughly L$2500, and for that he could have:

If he still wanted additional facial hair, then the mesh facial hair by Marcodigi Aeon (the one Skell wears a lot) is only L$105.

Total cost? Well, I gave some variants there, but no more than L$2347 for the most expensive option. Less than $10 and he could look bloody amazing. And yes, be the chick-magnet that he’s striving for in that image.

UPDATE – I quickly threw together a similar ‘hairy biker dude’ look from the items mentioned above. Total cost (not including shape, so if you grab one from BIG, add L$100 to the total cost) was L$2152. That’s less than US$9: 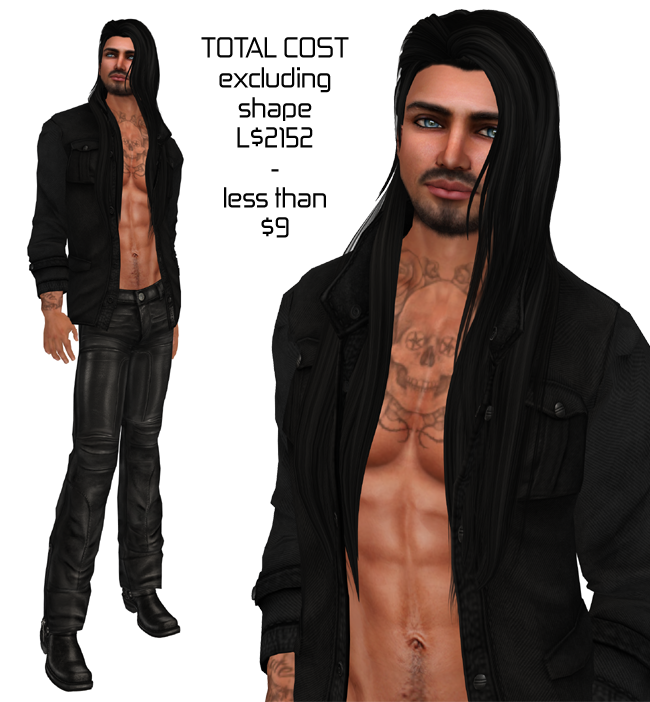 Quick Marketplace links for all that stuff:

I know, I know. Some people can’t afford even $10 for ‘a game’, and that poor guy is just wandering around and doing his best with the stores he finds. I may come across him again in three years time and he’s discovered mesh and all the amazing stores that you eventually learn about, and he’ll look amazing… but in my experience, the people who begin SL that way just carry on that way. And sure, if he’s happy with his freebie look then who am I to suggest he spends money to ‘look better’?

Yes, it can be done entirely free, and I have done it. I quickly logged in an alt that I kitted out, Goth style, entirely free (most of it from the Free Dove store, plus a couple of items from Marketplace; skin and shape are inventory starter avatar defaults). The only thing that I know is no longer available is the hair, but everything else? Still available, still free.

Still makes me heave a big sigh, though :-/