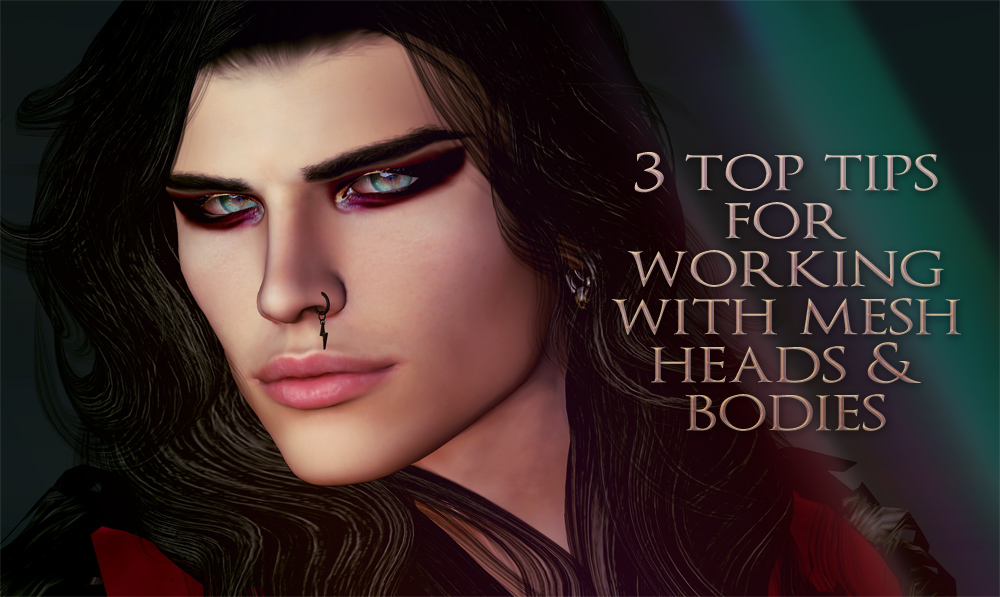 Since mesh heads and bodies first started appearing in SL, residents appear to have divided into several types: those who strike out and aren’t afraid to try new things and change things up constantly, those who struggle through getting their avatar set up and resolve never to touch it once that’s done, those who can’t face dealing with setting up their avatars themselves and who get someone else to do it for them, those who buy a mesh head and body and stick with all the default settings, those who tried mesh heads and bodies once and got so frustrated with them that they reverted back to system avatars, those who are a hybrid of system head and mesh body, and those who don’t want to know about mesh at all and would rather remain their system selves.

There are, of course, other ‘divisions’, and many of them cross-pollinate with each other. The person who struggled to get set up and vows never to touch their avatar once it is set up might also be the same person who sticks with the default settings, and so on. But, as someone who is in the first group, and who works on a regular basis with people who are struggling, I’d like to give you my three top tips for working with mesh heads and bodies.

These are three suggestions that I hope will quell some of the anxiety and stress that many SL residents feel when they’re trying to get to grips with mesh heads and bodies.

One thing that we see pretty frequently in the Catwa support chat is that many people are terrified of breaking their mesh head or mesh body. I’m here to give you Top Tip #1, and that is : Don’t be scared! You can’t actually break anything vital!

You honestly cannot break anything permanently* (we’ll get to that asterisk in a bit). Yes, you can accidentally do a lot of things that you might think will wreck your items. You can:

And many other things. Mesh heads, in particular, are pretty complicated things, and even the most basic of heads will almost always come with a HUD that might appear confusing at first. But even if you do all of those things, there are two simple fixes: reset and redelivery.

Almost every mesh head and mesh body (although this is far more common on mesh heads) will have a RESET option somewhere on their HUD. This can usually be found in the Settings tab, or maybe the skins or tinting tab. Add your HUD and go through each tab to see where your RESET button is. The RESET will restore your head or body back to factory settings; that out-of-the-box default look.

The only time that RESET won’t work is if you’ve managed to de-script the item. Many people remove scripts from their heads and bodies in the belief that they’re lightening their ‘lag load’. However, most heads and bodies are surprisingly light on scripts and don’t actually contribute as much as you might think toward your script load (in fact, your scripted AO might be far heavier). If you’re doing something that requires you to be as script-light as possible (for example: competitive sailing) then I would suggest putting together a system only avatar to do so. While region crossings have recently been improved immensely, the fewer ‘bits’ of you that the simulator you’re about to leave has to hand off to the simulator that you’re about to enter, the better. But, in general, the script load of a mesh head/body isn’t so bad that it will cause a lot of issues otherwise.

And, of course, it’s very easy to forget that you’ve de-scripted an item, and you might not realise that’s what you’ve done when you’re clicking around on your HUD and nothing is working!

So, what do you do when you’ve accidentally de-scripted?

Either visit the store where you bought your head or body and find the redelivery terminal, or (if you’ve kept it) unpack a fresh copy of the head/body from its original bag or box. I would recommend redelivery if it’s been quite some time since you purchased the item in question, as it may have received one or more updates since you purchased it.

In short: there is nothing that a reset or redelivery cannot fix… with one small caveat. You may have noticed the asterisk at the start of this section. Here comes the caveat that asterisk denotes:

*Caveat: if your mesh head or mesh body is a ‘no copy’ one (usually this is the case with gacha items) then you will not be able to redeliver. A ‘no-copy’ item is a one-off that you own. I’ve only ever seen gachas used for mesh heads, and only by one particular creator (Genesis Lab), so if your mesh head is a gacha one by that creator, do make sure you take extra care when customising it, because you will not be able to redeliver it.

Tip #2 is: Make copies for testing!

In the Catwa support group we frequently have people coming into the chat to say that they’ve tried a demo of a skin or some makeup and they don’t know how to remove it. While this is often simply a case of not knowing how to use the HUDs that come with a mesh head or body, these people can sometimes be in a bit of a panic, thinking they’ve ruined their avatar because they tried a demo skin and now have DEMO DEMO DEMO written all over their face!

When you’re new to a mesh head or body, one of the best things you can do is to set up a testing folder. Create this new ‘For Testing’ folder in the Body Parts folder of your inventory. Inside the folder, place copies of the following:

Make sure these are copies and not the original items. (You can make copies of items in your inventory in exactly the same way as you would copy a file on your computer: right-click > copy, and then right-click > paste the copy into another folder. The only things you can’t copy are, well… rather obviously, items that are designated by their creator as ‘no copy’.)

Then, whenever you want to try anything new, be that changing your shape or trying some demo skins or makeup, detach your everyday copies of your mesh head and body, and add/wear the ‘For Testing’ shape, head, and body. Play around to your heart’s content with those copies, safe in the knowledge that when you’re done testing, you can go back to your ‘everyday look’ without any worries.

Tip #3 is for those using Bento mesh heads: use the head’s starter shape.

One of the things that anyone who has been a resident of Second Life for more than a few weeks will want when they make the switch to mesh is to keep the look that they have already worked on and become familiar with. Those who have been residents for years can really struggle with this (I know that I did; boy, you probably don’t want to know how volubly I bitched about mesh heads until I finally got to grips with them!) and may never make the switch to a mesh head, long after they dipped a toe into the ocean with a mesh body. The longer that you ‘live’ in SL with a specific face on your avatar, the more that face becomes you inworld, and it can be hard to undergo what feels like avatar plastic surgery. I’ve seen many many residents (and was one of them myself) who say “I won’t switch to a mesh head until I can recreate my system head exactly“.

What does that have to do with using the head’s starter shape? Well, a lot of people will just put a Bento mesh head on over the top of their usual shape—the one with the system head that they so desperately want to keep—and it. will. look. bloody. terrible. That, alone, can put people off making the switch, right from the outset.

While it is possible to edit your original system shape to work with a mesh head, it takes a hell of a lot of work. And if you’re not used to the way that sliders manipulate mesh heads, it can be a daunting process. This is especially the case since some newer Bento mesh heads—such as Lelutka Evolution and Catwa HDPRO—now include additional HUD-based sliders that allow for further customisation, outside of the traditional system shape sliders.

To avoid all of that, it’s always recommended to wear the starter shape that’s included with your mesh head, and start tweaking that one.

But what if you don’t like the body that comes with the starter shape?

By doing that you will have the ideal head sliders from the head’s starter shape, together with your preferred body sliders. You can then start tweaking the head’s sliders to customise them and make them more unique to you. This is the very first thing that I do when I start working with a new mesh head, even at the demoing stage. Also, see the first of the below tips for an extra little hint to save you time when noting down those slider numbers.

Now get out there, poke those HUD buttons to find out what they all do, and don’t worry about messing things up! Getting a new mesh head and body is a new learning experience, but it can also be a fun playtime, if you let it. If you find yourself getting frustrated with it, STOP. Take a step back, take it all off, and go do something else. Come back to it when you’re ready to have another stab at it. Don’t give up, and don’t lose heart. You will get there eventually :-)