Take a look at this hair, my sartorial darlings. 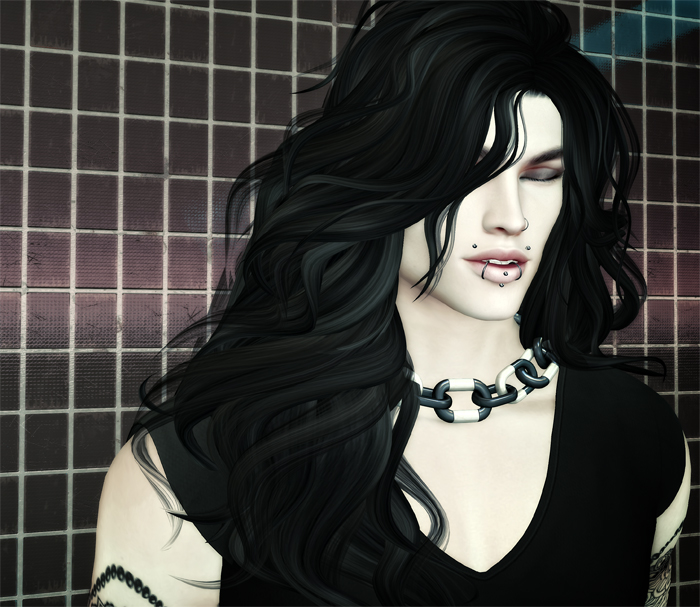 Is that not as delicious as sin?  My god, when I saw it at Uber I had to try it, but when I put it on I had to have it. It’s the new (yes, yes) female ‘Livia’ hair from Truth, but it looks fucking gorgeous on guys, and what’s more: it fits almost perfectly at the back, too (unlike many other female hairstyles). There’s a teeny bit of poke-in between the shoulders, but the rest of the hair is long, tousled, and voluminous enough to disguise that.

Add to this the fact that—as with all Truth hair—you get a multi-style HUD alongside the great colour HUD, and you’re onto a winner. With the style HUD you have options for which side of your hair is over your shoulders (or not) plus multiple options for those “you sexy muthafucka” bangs that drape so beautifully over your eyes. 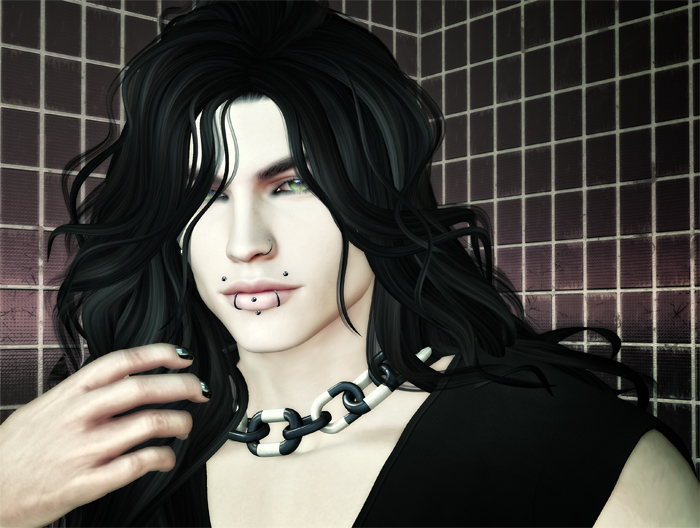 I swear, if you guys don’t grab this and then have a stab at perfecting your “come hither” looks, I shall be so disappoint, son. This hairstyle is just made for sending your partner (or prospective parter) weak at the knees, so don’t let the ladies hog it all to themselves! ;-) 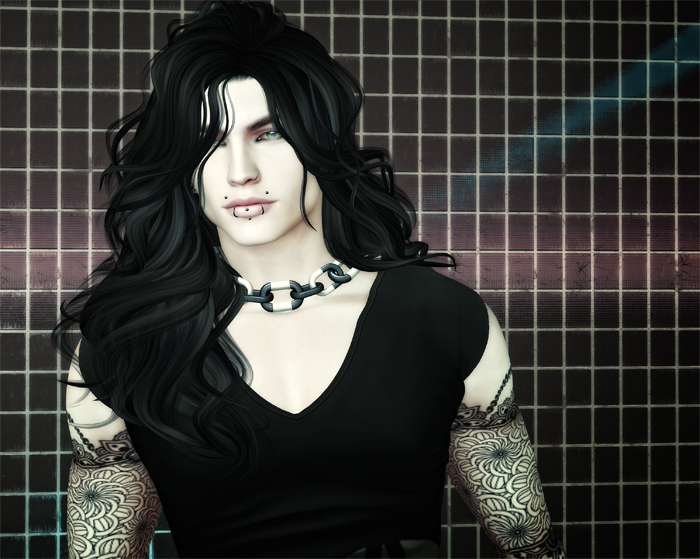 I, uh, guess I’d best stop waxing rhapsodic about Skell’s barnet and take a quick gander at the rest of him. *sigh*

In the words of Mary Poppins…

The necklace is new from Mandala, and also out at Uber. As with all Mandala items, there’s a fantastic customisation HUD allowing you to change each of the links in the necklace. Male and female fits are included in the folder, and the male one didn’t need even one iota of adjustment (which is a refreshing change from so much other jewellery in SL). 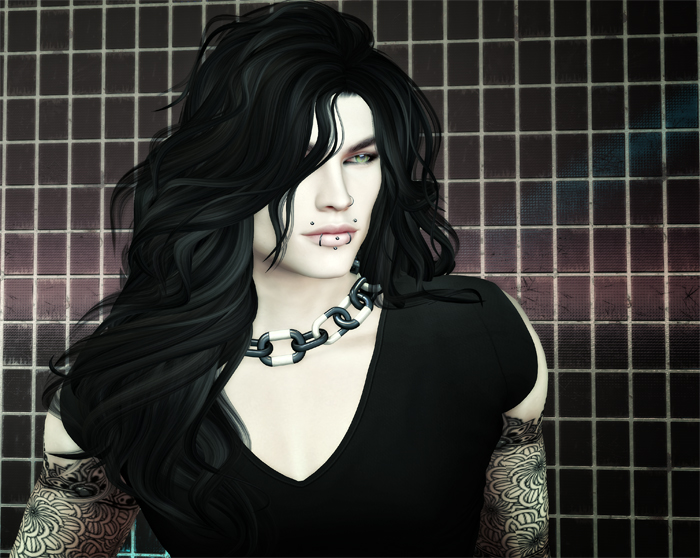 The eyes are stunners. Again, out at Uber, they’re by S0NG, and are available in a Catwa fatpack only. I will note here, that every applier that I’ve tried by S0NG appears to sit a little too high up on my Catwa rigged eyes. This is easily fixable with the Catwa Eyes & Tears HUD, which allows for fine-tuning of texture position and size, as well as specular and many other things. Added to that: it also contains a ton of free additional eye appliers by Catwa (and you can create copies of it to overwrite those with your own appliers, giving you one—or more, depending on your eye applier habit!—HUD with everything in it).

The lash appliers—though they’re not easy to see here—are from a beautiful hand-painted set by Stardust, at Uber. I picked up both the Catwa and Lelutka options. Definitely worth it, as they’re fine and delicate enough for male lashes, so they’re pretty much unisex. 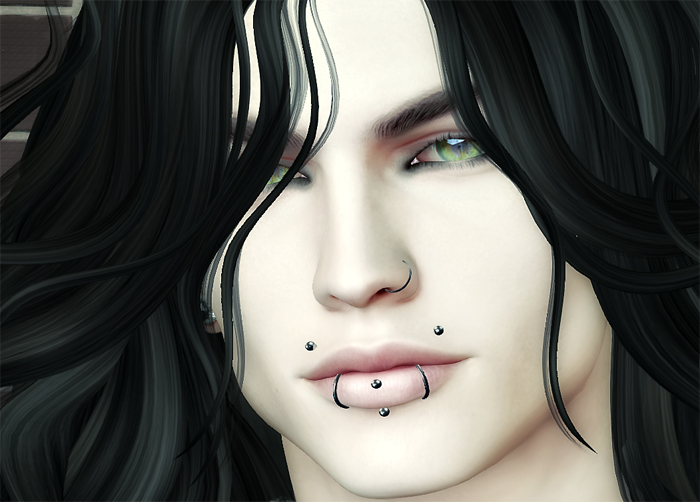 Yeah, you’re looking at that skin, too, ain’tcha? Well you’ve got Insol to thank for that, and please do  thank them, because they’ve started making some beautiful, porcelain-like male appliers at last! I’ve long envied the lovely female appliers that have been released from there, so it’s fantastic to see male appliers coming out, too. This one is ‘Tyson’ in tone 01, out at Kustom9. Matching body appliers can be found at Bold & Beauty (LM is in the Insol folder).

I’m going to note something here that did make me side-eye just a little, though. You know me: I speak out about what I love, but I’m also not afraid to speak out when something strikes me as wrong or unfair. And the body applier issue here is a little unfair. Bold & Beauty sell female body appliers to match Insol heads, too. And when I say they sell them… I actually meant they sell them… for FREE. Yep. The female Bold & Beauty body appliers, for multiple female bodies, are absolutely free at the store.

The male appliers? Hrrr… those are sold in fatpacks for individual bodies, and at L$350 per pack. I picked up the Omega version, since I was unwilling to shell out L$350 for the Slink appliers, followed by another L$350 for the Signature appliers, etc. So yeah: the ladies get their appliers free, but the guys have to pay. That said, though, they’re absolutely fucking fantastic appliers and—since I consider L$350 for a fatpack of body appliers a good price—it might seem that I’m griping for no reason. Rest assured: the gripe only comes because of the disparity in cost between male and female appliers. Why do the ladies get theirs free, while the gents have to pay?

Anyway, back to the fashion. This tank from Justice is out at the current Sense Event, and comes with fits for the four primary male mesh bodies (check out the credits for a full list) and several pattern options. It’s great to see more and more clothing being rigged for Signature Geralt, too. Keep that up, please, designers!

White Widow have the tattoo appliers out at Cosmetic Fair, with multiple colour options (sold separately) for the ‘gems’. They also have leg tattoos in a similar style that—rather wonderfully—look like garters. Didn’t pick those up, but I was tempted ;-)

The piercings were recently released by Catwa, in one massive pack for either men or women (L$460 each). Each pack contains rigged piercing sets for all Catwa Bento heads, with a huge customisation HUD that allows different metal colours as well as hide/show options for each piercing. My set here is quite minimal compared to the full option! 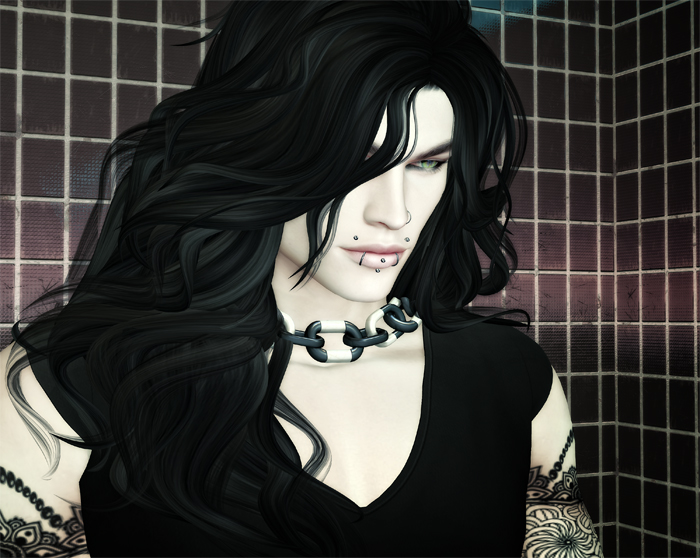 Get your arses over to Uber, lads, and let your hair down ;-) 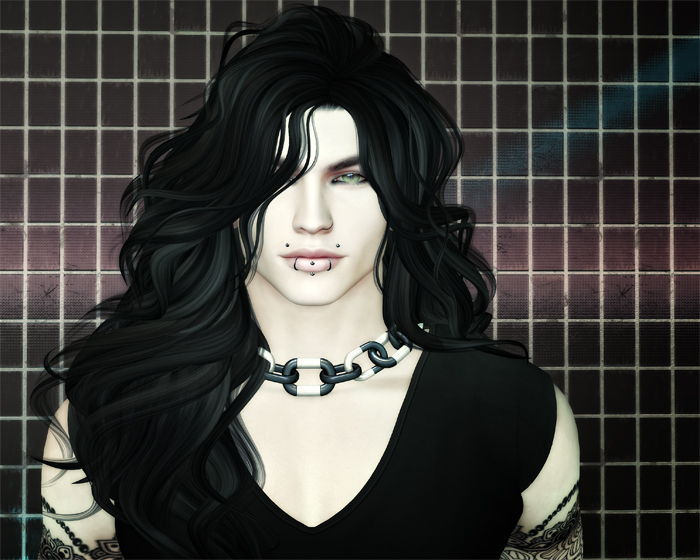