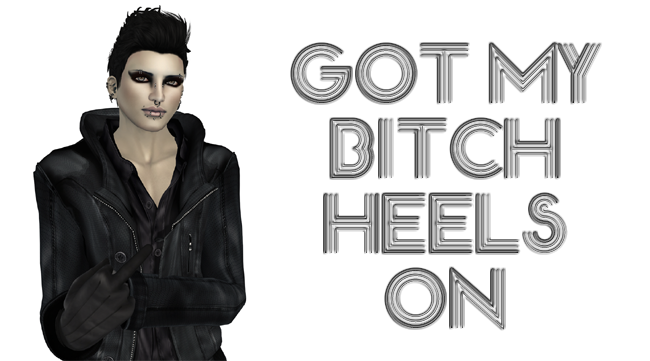 Admit it. You took one look at that title, shuddered, and nodded emphatically. If not, then take a little scroll through your immaculately-sorted inventory because, even if – unlike the rest of us heavy shoppers – you don’t have a pile of unsorted stuff waiting to be neatly put away, you must have at least one folder where **!!<<OMFG MY STORE IS AMAZING!>>!!** sits above COME SHOP AT MY PLACE.

One starts with the letter ‘O’, the other with the letter ‘C’. Unless you deliberately sort every single thing in your inventory in date-purchased order, rather than alphabetically, the fact that C should come before O is… a no-brainer.

Why do creators do this? I tried to come up with some reasons, and they boiled down to the following:

UPDATE (July 5th 2013) – Ruina makes a good point in the comments about branding, and I’ll admit that I was being kind of arsey in this post about that. She’s absolutely right (see my reply to her), so I’ve struck that point out. (Note: if I’m ever wrong here, you won’t see me delete shit. I’ll strike it out, but let it stand. The internet is forever, so if you’re an arse at any time, might as well let your arse-ishness stand, rather than try and cover it up.)

Any more suggestions as to why, drop a comment, because I am stumped, dear reader. Thing is, I love many of these stores, but I am getting heartily sick of having to constantly re-name their folders (so heartily sick that, clearly, I’ve procrastinated for too long and I now have a complete morass of folders to work through *sigh*).

As a creator myself I wouldn’t dream of it, because if there’s one thing I know it’s this:

Putting non-alphabetic (for me, this also includes numbers, and when people use the letter ‘x’ as decoration) characters at the start of a folder/item name means your item gets LOST in the scrolling to get PAST all that stuff to find the stuff that’s actually named normally.

I’m going to subject you to the mess that is the special-charactered miasma of my unfiled inventory folders right now. Be prepared for a L A R G E image, my little darlings. I don’t like to brag, but you might want a little lube over there, honey, because this baby is BIG:

The red lines denote points where the alphabet ‘breaks’ (ie: a much later letter comes before an earlier letter). In the case of folder names that start with the same letter, any breaks are taken from the second letter (thus there would be a break between ‘brown’ and ‘beige’ if the former came before the latter, since ‘e’ should come before ‘r’).

Now, find me the Æros ‘Miles’ avatar that I want to blog.

And, creators? The same thing goes for your inventively-prefixed landmarks…