Did you ever—?
Not so much that you could notice.
Well could you estimate how many—?
Eight or nine.
Will you do it any more—?
As soon as you walk out the door.
Well I just wondered, did you ever—?
All the time.

Nancy Sinatra, gotta love her (even if she did go all country on ya with this one).

It’s Monday Meme time again, and this week Berry is wondering Have You Ever SecondLifed?

Meme Instructions: Copy and paste the following questions and answers to your post, delete my answers and input your own. Don’t forget to leave a link to your post in the comments so others can come by and read your answers as well! 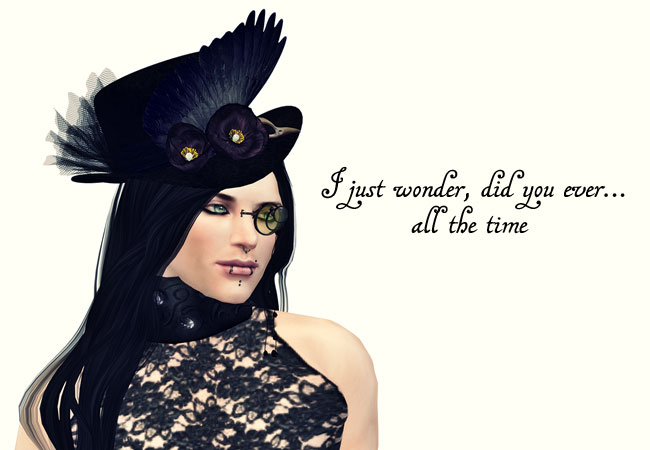 Have you ever owned a sim in Second Life? –

Not an entire sim in its own right, but between owning most of Jindalrae and a large plot on Star I do hold (and pay for) an entire sim of tier, with its attendant 20% VAT >.<

Yes, of course, and I’ve been doing so since pretty much my first year inworld. Together with Daros and Rannon I run the Gentlemen Bastards group of stores, with my stores being Domicile (homes and gardens) and—to a lesser extent—INDUSTRIA (piercings).

Have you ever driven a vehicle in Second Life? –

If it’s wider than a bike I won’t touch it. I’m a terrible  driver when it comes to cars, trucks, planes etc. Give me a sweet little motorbike, though, and I’m happy as a cricket because the road is more forgiving and I can drift to my heart’s content. 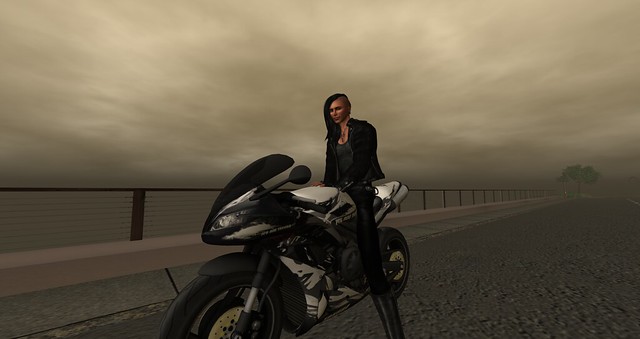 Have you ever gone sky diving in Second Life? –

I’ve fallen off enough build platforms to say ‘yes’ to that, but officially? I think I can remember going hang-gliding once or twice, but not sky diving,

Have you ever played a sport in Second Life? –

Have you ever gone clubbing in Second Life? –

In the past, yes, a lot more than I do lately. I honestly don’t remember the last time I put my gladrags on and shook my butt in an SL club, actually.

Have you ever fangirled/fanboyed someone in Second Life? –

Not seriously, no. I think we’ve all that that “Oh look, well-known designer/SLebrity in the pixel!” frisson when we spot them out and about, but I don’t necessarily fanboy them. I recall my first ever well-known designer-spotting episode, though: it was Tesla Miles, quite a number of years ago now.

I’ve been  fangirled, though. That was an… interesting experience, I can tell you O.o

Have you ever taken a picture of your avatar in water in Second Life? –

Haven’t we all? Numerous times. I took quite a lot when that mirror water hack was blogged about a few years back. Examples below: 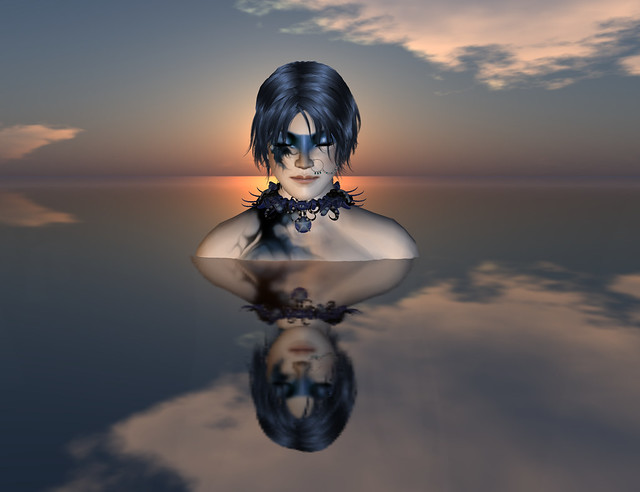 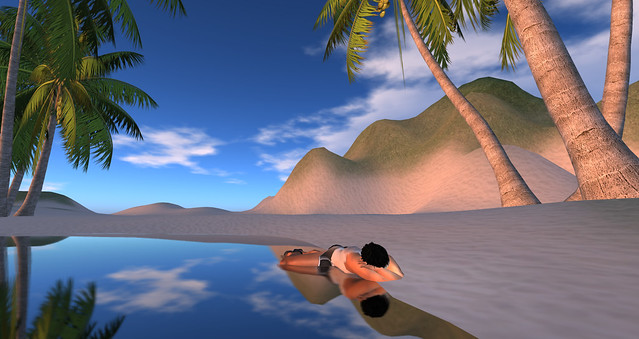 Have you ever taken a picture of a sunset in Second Life? –

Up until Windlight, no. After Windlight, yes. I still love catching those few seconds of a Windlight sunset over water, where everything just turns blazing hot pink.

Have you ever taken a nude picture of your avatar in Second Life? –

*side-eye* This is me you’re talking to. Of course I have. I’ve made whole porny slideshows in SL, but the only person who gets to see them is Daros :p

This is about as close as you lot will ever get to seeing Skell completely in the buff: 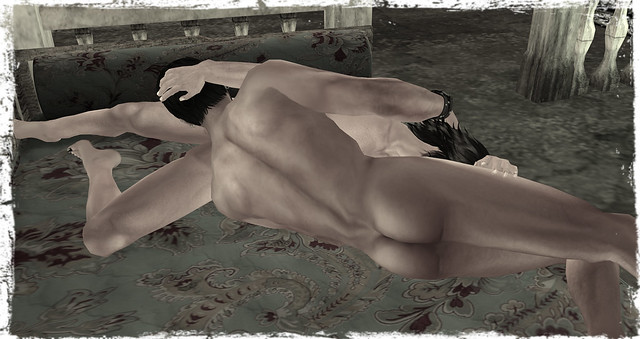 Have you ever dated in Second Life? –

No, because I came into SL with  Daros. I’ve never needed to date inworld.

Have you ever had or attended a wedding in Second Life? –

I’ve attended a couple, and of course Daros and I got married inworld, too. Ours was something of an, er, unconventional wedding, though. This was the invite (yes, featuring my butt in a miniskirt) – 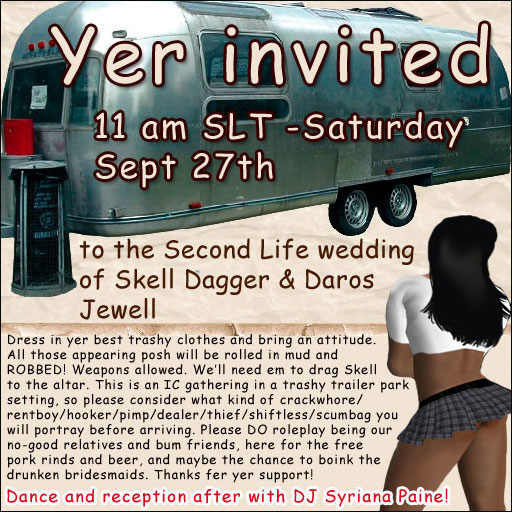 And, before I receive hate mail from those who live in (or grew up in) a trailer park; our wedding was intended to be a light-hearted little poke at the worst trashy trailer park stereotypes you can think of, not trailer park living in general.

And here’s the happy couple, solemnly approaching the altar. Thanks to Brann for these pics (I was too busy laughing my ass off to take many photos!). Yes, Skell was dragged to the altar by his hair. The guy marrying us was wearing a stetson and carrying a shotgun. I was Norma-Mae and Daros was Big Dawg XD 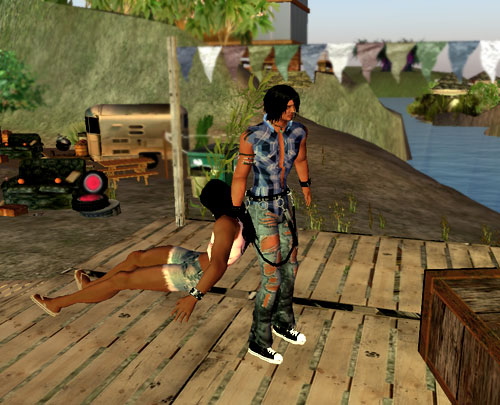 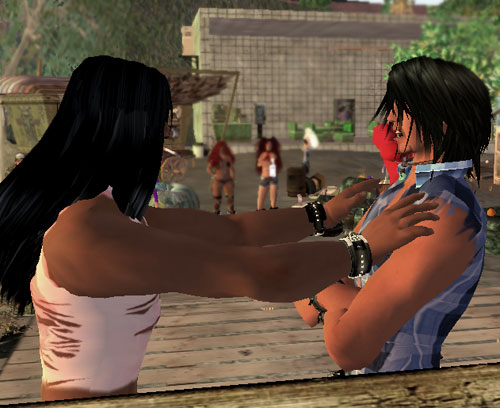 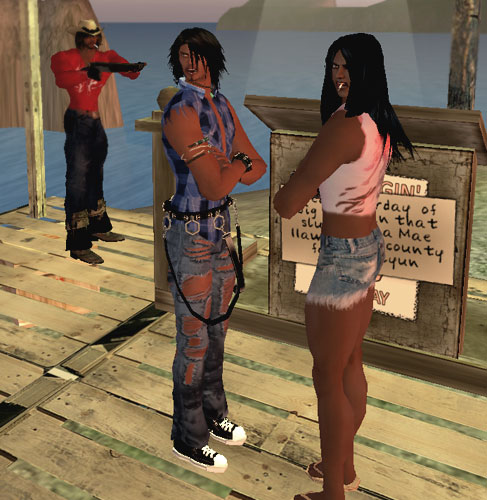 And here’s Maureen (who played the part of Ruby-Mae) gettin’ on down (sign-placement deliberate!) after the ceremony, with me and Daros having a slow-dance-smooch in the background – 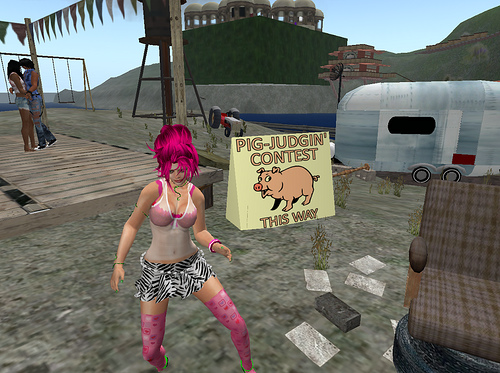 Have you ever drank, smoked or taken drugs in Second Life? –

Yes to all three. Interestingly, Skell smokes like the proverbial chimney, but I don’t smoke IRL.

Have you ever engaged in sexual activity in Second Life? –

I think this counts as a “Well DUH!” answer. Of course.

Aaaand Skell is embedding a country song  into a blog post. THE WORLD IS ENDING!