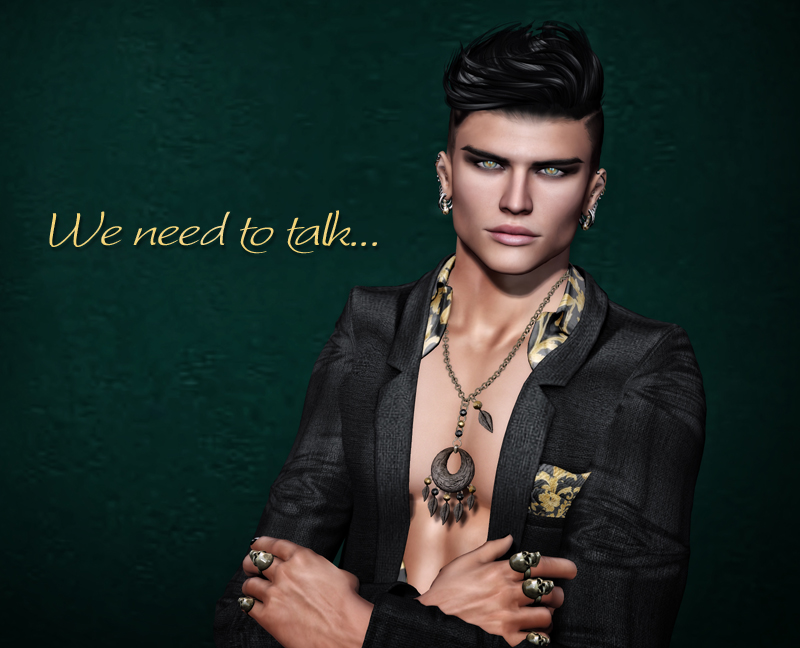 We need to talk.

It has come to my attention in recent months that more and more of you are creating ‘fatpack only’ exclusives. Initially these exclusives were only special patterns that may be more desireable than those offered singly, and to me that’s absolutely fine. If I really, desperately want that pattern then I will probably spring for the fatpack. I’ve even blogged about that in the past, including a shirt that contained a fatpack-only pattern that I simply had to have. But in all of those cases I could still have purchased individually all of the basic solid colours that I might want.

But this week I noticed two of you – both event sponsors at two separate inworld events – doing something new:

The first type of ‘fatpack only’ is something that’s a carry-over from that “black/white is always the rare” gacha mentality, but honestly… putting the two basic colours that people will probably most want into your fatpack only? I’m sorry, but when you’re selling individual items in blue, emerald green, tan, mustard, and wine (which looks more like a deep pink in your ad) for L$235 each, but I’m expected to pay L$999 just to get the ‘bonus colours’ of black or white then you’ve just lost a sale from me, and probably from many other guys as well. (Yes, I’m actually pretty pissed off about this, because finding pants that I really like is a rarity in these days of sweatpants and saggy jeans. I fucking loved these pants, but I don’t love them enough to fork out just shy of a grand for the single two colours that I want.)

But the second type of ‘fatpack only’ is – if anything – even worse. Not only are you hiding a basic colour of the item behind the fatpack price, you’re also hiding a basic function of the item behind the fatpack price. The clothing is priced singly at $299, but I’m not paying L$1,649 just to have a black tank top as well as the ability to hide it.

And then there’s the ads. Let’s talk about those ads.

What does the ad show? The black version of the pants. Nothing on the ad to indicate that those black pants are a fatpack-only option.

To be fair, you do have a prominent sign at the front of your booth, stating that both black and white are ‘bonus colours’ in the fatpack only. But – however much I love that particular clothing item (and believe me, I really did love it and I would have bought both the black and white pair at single prices, which would have given you L$598 from me) – I refuse to be forced to pay an additional L$401 just to get the two colours that I want, alongside five colours that I will never wear.

What does the ad show? The clothing with that underlying tank top both in place (single purchase option) and hidden (fatpack only option). Black tank top not shown. Nothing on the ad to indicate that the ability to hide the tank top is a fatpack-only option.

I clicked to get the demo of this, and immediately saw – before I’d even paid the L$0 to grab it – the notecard title shown below. Being a long-time jaded old bitch of an SL shopper, I knew what that meant. And I was right:

And – while the item looked great with a white tank top (and I actually preferred the look of the clothing with the tank top showing) – I deleted the demo without even trying it on, purely because locking a basic function of a clothing item behind a price seven times higher than the cost of the individual item didn’t sit well with me. Again, two sales lost to a total value of L$470, because I would have purchased both the black and white plain options of the top.

Additionally, this particular fatpack appeared to be a ‘megapack’ that also contained jeans. I’ve no interest in those jeans; they’re not my style. So yes, it’s a bargain to receive 9 tops and 6 pairs of jeans for L$1,649 but there is no way I’m paying that much just to have the ability to hide the tank top or get it in black while the rest of the fatpack just gets deleted from my inventory.

I don’t in all honesty expect you to listen to me. After all, I’m just another blogger in a sea of much bigger fish, and you very likely don’t give a shit about losing sales from one person who is a bit disgruntled at certain business practices that you’re indulging in. But I guarantee you that I’m not the only person out there who thinks that way, so who knows what the actual potential loss in sales is for you?