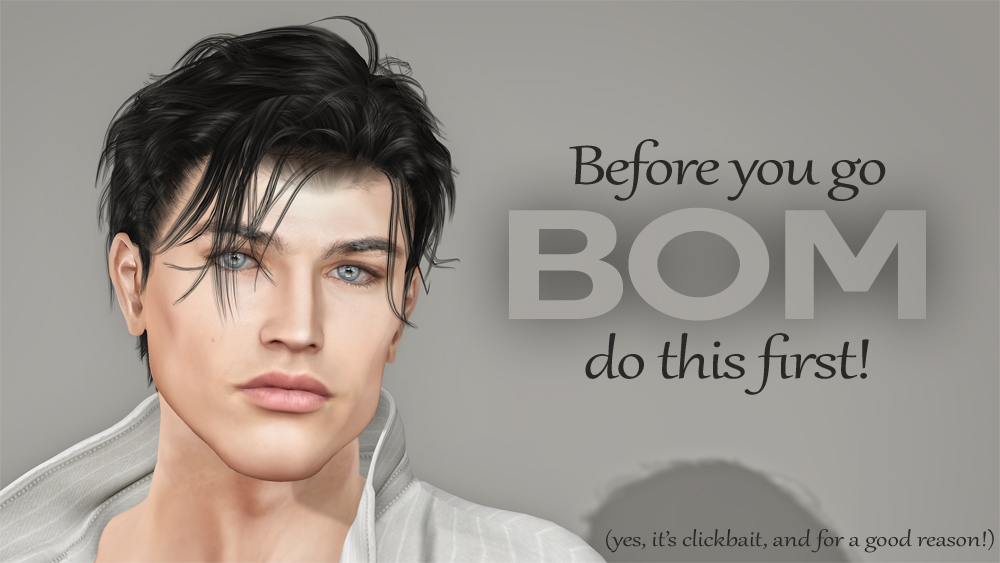 Are you ready for just a teeny bit more clickbait?

Have you spotted it yet? There’s a stonking great hint as to what the issue is, right there in the (admittedly somewhat obnoxious) text on that ^ banner image.

Okay, I’ll put you out of your misery. The words “enabled BoM” followed by “applied my skin” are the issue.

My sartorial darlings, the number of ‘double faces’ that I have been seeing on people who have “enabled BoM” and then “applied a skin” are absolutely skyrocketing. And the only thing I can put it down to is BoM being The New Thing, and people simply not understanding what BoM is and how it works.

What do I mean by ‘double face’? Well, brace yourself…

That… delightful look on the left is what will happen when you enable BoM on your head and then use an applier skin. Because BoM and applier skins are incompatible.

Many people want to use BoM, because it’s a big buzzword right now. ‘BoM’ stands for ‘Bakes on Mesh’ and here’s the most basic explanation that I can give you of that:

What BoM does, in essence, is it takes all of the stacked system layers on your underlying system avatar, composites them into a single texture, then sends that texture to your mesh body, which we call ‘baking’, hence the term ‘Bakes on Mesh’.

If you take off your mesh head and mesh body, and any other mesh items you’re wearing, what you have left underneath is your system avatar. We all have one, and for most of us in these days of mesh this-n-that it’s hidden away.

Now that we have BoM, we need to pay attention to that previously-hidden system avatar, because that’s the thing that our BoM skins, makeup, facial hair, brows, and eyes are all going on. BoM makes use of system layers. In order to use BoM we need to remove the alpha layers that hide our system avatars. We then need to enable BoM on our mesh heads and bodies (see my post here for how to do that) or we wear the BoM-only version of a specific body type (e.g. Slink Redux) or ‘BoM-hybrid’ HD heads (such as Lelutka Evo and Evo X, or Catwa HDPRO). We’ll get to what I mean by ‘BoM-hybrid’ in a little while.

I’ve explained across several posts how most mesh heads and bodies enable BoM. The ones that are not automatically BoM usually do this by means of a BoM activation button on their HUD, or a separate BoM activation HUD. And what that Bom activation does is it puts special textures onto your mesh head and body. You can’t see these textures, but a BoM-capable viewer (which pretty much all viewers are these days) will know what to do when it detects those textures. The special textures tell the viewer, Hey, grab all the texture layers on the system avatar, stick them all on top of each other, then squish ’em down into a single layer, and ‘paint’ that layer onto this mesh head and body.

These special textures are usually put onto the skin layer of your mesh head and body. Effectively, the BoM activation button on your HUD is a ‘skin applier’ and that ‘skin’ that it applies comprises the special textures. 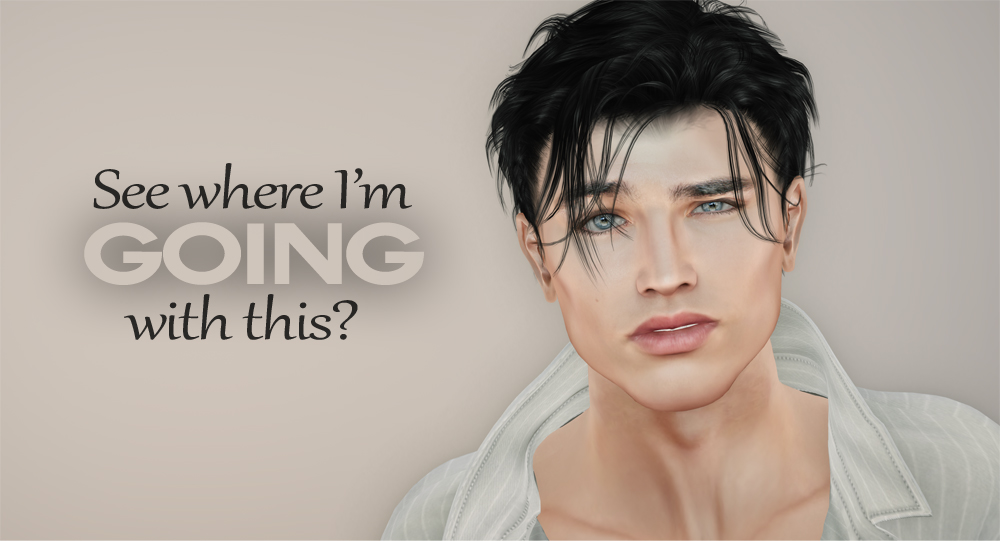 Sooooo… if you’ve enabled BoM on your mesh head and body by using those BoM activation buttons (which, remember, are effectively ‘skin appliers’ that apply the special textures to your mesh head and body) what do you think is going to happen when you try to apply your usual applier skin over the top of that?

Yep, it’s going to replace that ‘special BoM textures skin’. The BoM textures will no longer be on your mesh, so the BoM capability will stop. What you’ll be left with is a mesh avatar with applied skin, but with no alpha layer to hide the underlying system avatar (remember: that’s what we had to do when appliers were the only things we had). So that’s why you see ‘two faces’. Your mesh head is overlapping with your system head.

So how the hell do I fix it, Skell?

If you want to use BoM on your mesh avatar, you must start with a BoM skin. And that’s basically a system skin; a texture, not an applier. If you have to add a HUD and then click it to put the skin on, then it’s not a BoM skin; it’s an applier skin. A BoM skin is something that you wear or add directly from your inventory.

There are several different ways that different creators have made BoM skins:

BoM skins are mostly separated out into head and body, just as appliers were. You will need to locate a BoM head skin for your mesh head brand, as well as a BoM body skin for your mesh body brand. As mentioned above, that could be all together in a single system skin (in which case, focus on which mesh head brand it’s fitted for) but it’s more likely to be a combination of system skin and tattoo layer. You wear the system skin, and then add the tattoo layer.

After that you can layer on as much BoM stuff as you like. Want to wear 50 BoM makeups? You can. I mean, IRL your face would be absolutely caked in it, but in SL by god you can get some amazing effects from layering and layering.

A small, musing side note here, because something that I find both puzzling and intriguing is the number of long-time residents – those whose entry into SL was long before mesh was a thing – who struggle to understand BoM. Those are the people who started out with only system layers (and I was one of them, rezzing in 2007 as I did!) and who used only system layers for years. As SL added new technologies they learned how to stack system layers, so they could wear different tattoo layer makeups on their system skins. Of all people, those are the ones one might expect to take to BoM the easiest, as they spent years doing that layering! But try to get them to understand that BoM uses exactly that same method of layering that they used for years and years… and it’s as if you’ve asked them to solve the Voynich Manuscript or invent a new form of calculus. It quite honestly flummoxes me why some long-time SL residents view it as so difficult.

And now for some other important stuff

You cannot wear BoM makeup over an applier skin

BoM just doesn’t work that way. Previously, I’ve described it like this:

About those ‘BoM-hybrid’ HD heads

What do I mean by ‘BoM-hybrid’? I use this term to describe the new HD heads such as Lelutka Evo and Evo X, and Catwa HDPRO. These heads are combinations of BoM and special sections for appliers. Those two brands work slightly differently, so I’ll give a brief run-down of both:

The ‘hybrid’ part comes from the fact that the best way to use Evo, Evo X, and HDPRO heads is in a hybrid format: mostly BoM as far as you can, but then if you want you can add special HD appliers for certain sections of the head, such as eye makeup, lips, and ears.

Here is an example. This is a Catwa HDPRO head, with the base layer (for the skin) in white plus the additional HD applier sections (for the eye mask, lips, and ears) shown in grey: 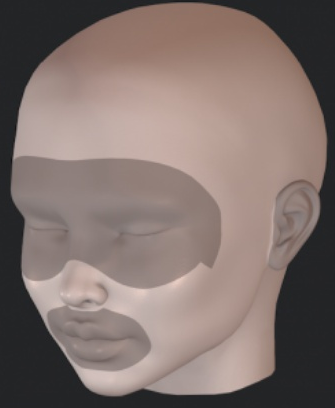 When we only had appliers, this was simple. You literally could not use an applier intended for one brand on another brand’s head. A Lelutka applier would not work on a Genus head, etc. But with BoM, you could (if you wanted to) wear any BoM/system skin on any head. The trouble is… it might not look good. And this is down to a thing called UV mapping.

A UV map is a texture map. It looks pretty weird and stretched out when you look at one on a flat plane before it’s put onto a mesh head, but what it does is show a skin or makeup creator where each part of the texture needs to go in order for it to fit correctly on a mesh head or body. To the untrained eye most texture maps are quite similar, the exception being the new Evo X ones, which are completely different, so if you add a BoM skin onto an Evo X head and look like some upside-down thing out of a horror movie, you need to either get an Evo X skin or enable Classic mode on your Evo X HUD.

However, where UV maps differ is in the way that they’re ‘wrapped around’ the mesh. Without getting into the kind of technical details that would be far too much for a blog post that’s trying to explain things simply, I’m going to explain using an ‘Origami analogy’ –

The simplest way to understand how UV maps work is to think of them as a square of origami paper. One person will fold that paper into a crane while another person will fold it into a flamingo, but it starts out as the same piece of paper. Lets say that the crane-folder is the Lelutka brand, and the flamingo-folder is the Catwa brand.

Now imagine painting the folded crane to look like a crane, and the folded flamingo to look like a flamingo. Unfold both of them and swap them over. Lelutka is now going to fold their crane with the flamingo-painted paper, and Catwa will fold their flamingo with the crane-painted paper. The end results will look a bit odd, because the painting was done for a differently shaped bird. That is why – while you can actually wear a BoM skin created for Catwa on Lelutka (or vice versa) – it won’t look right.

Hopefully this post has explained why the ‘double heads’ issue is showing for so many people, as well as how to fix it.

3 thoughts on “Before you go BoM, do this first!” 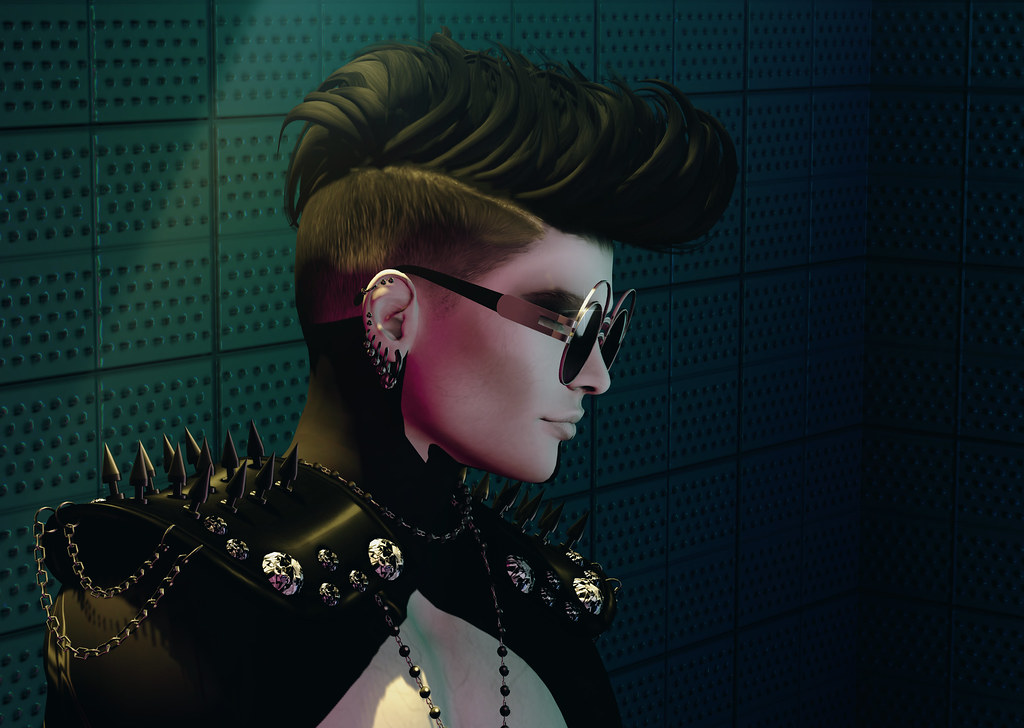 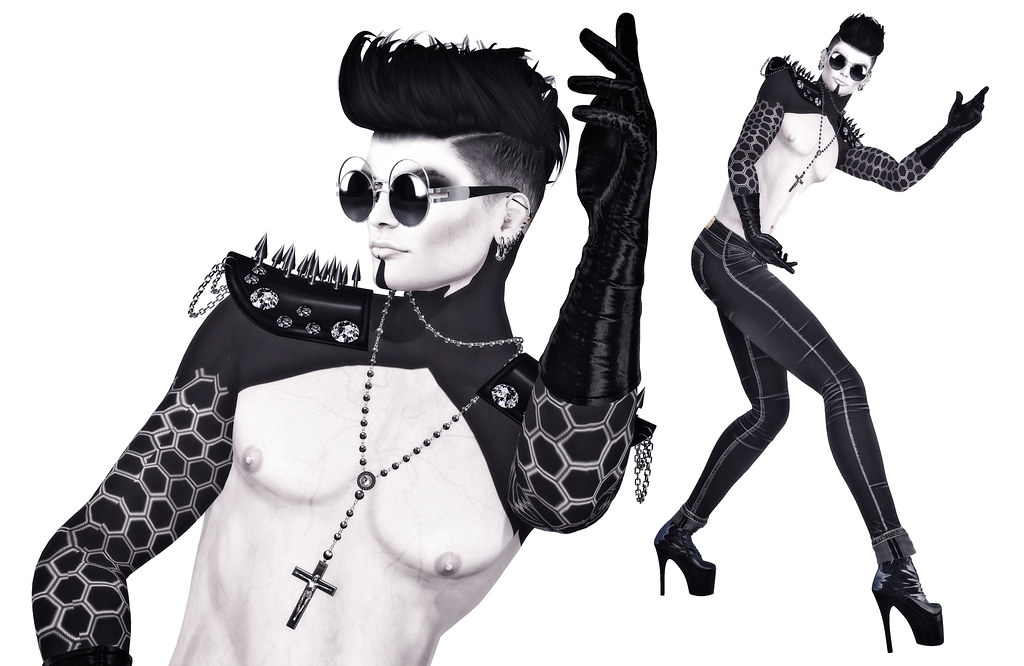 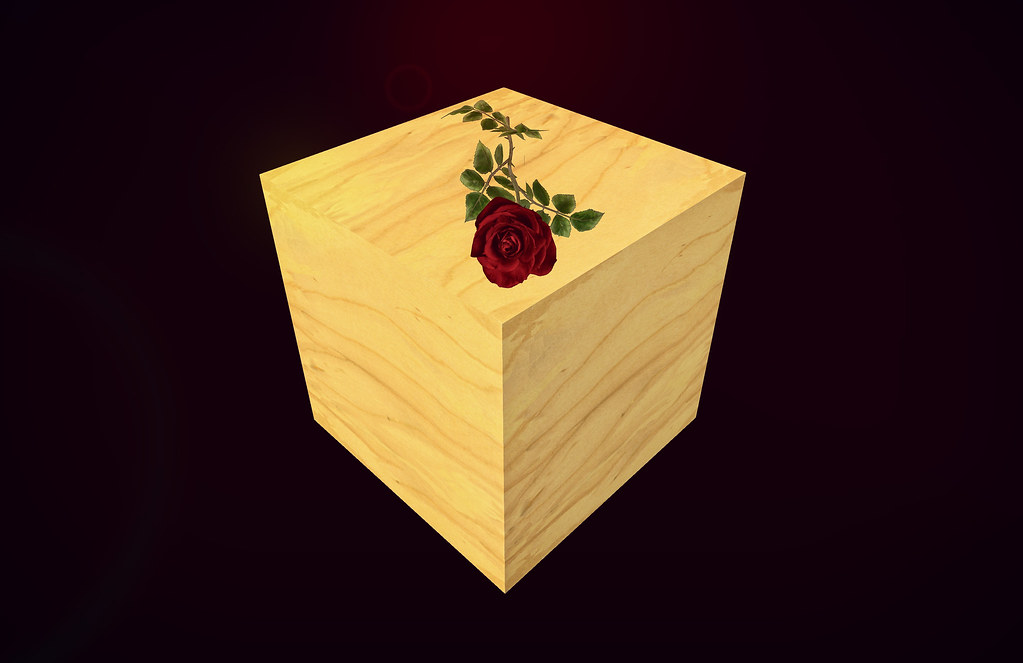 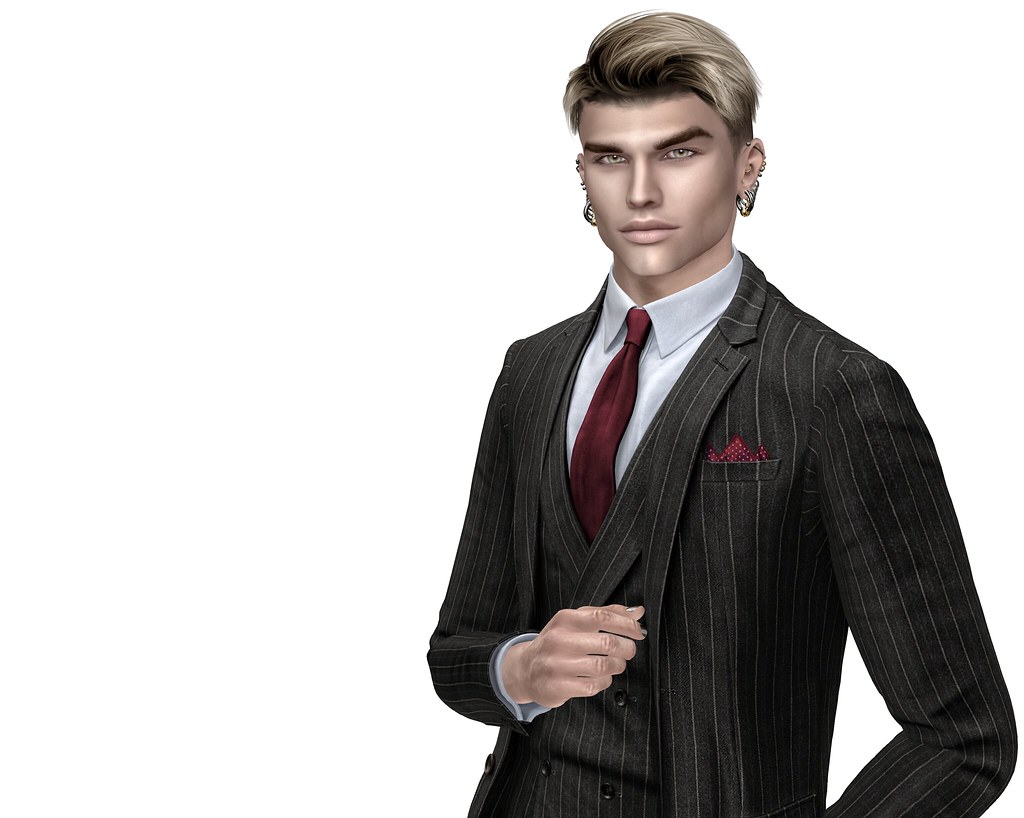 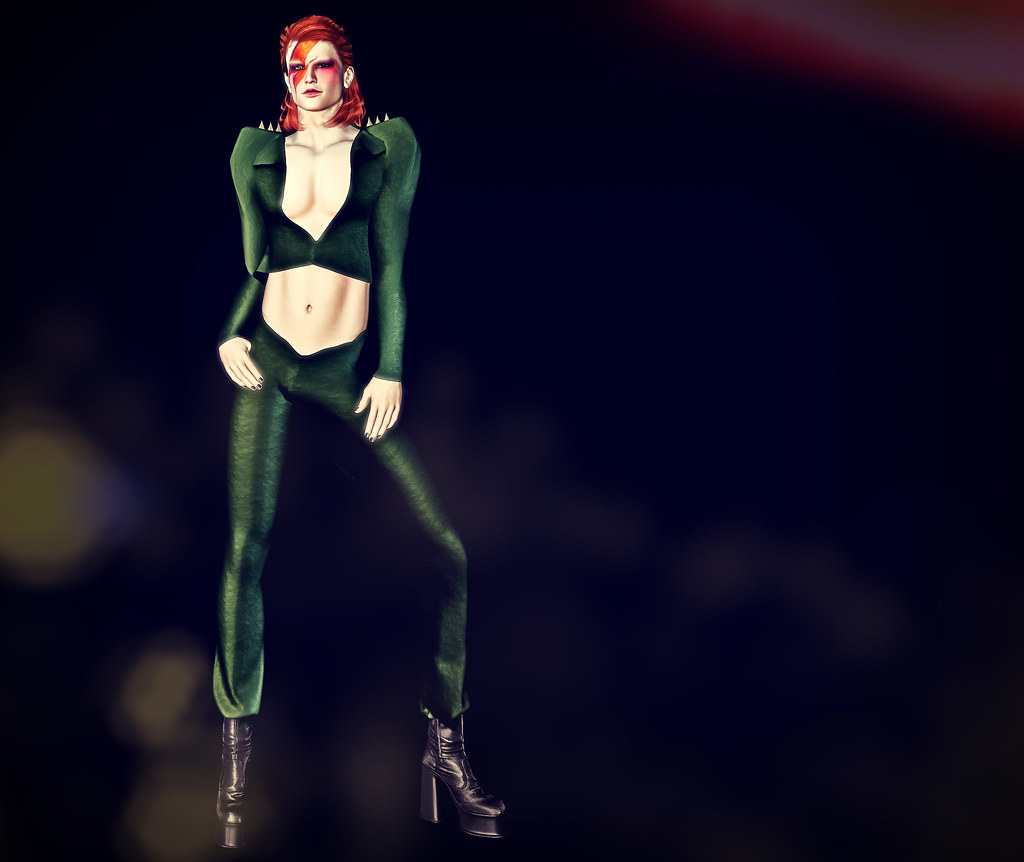 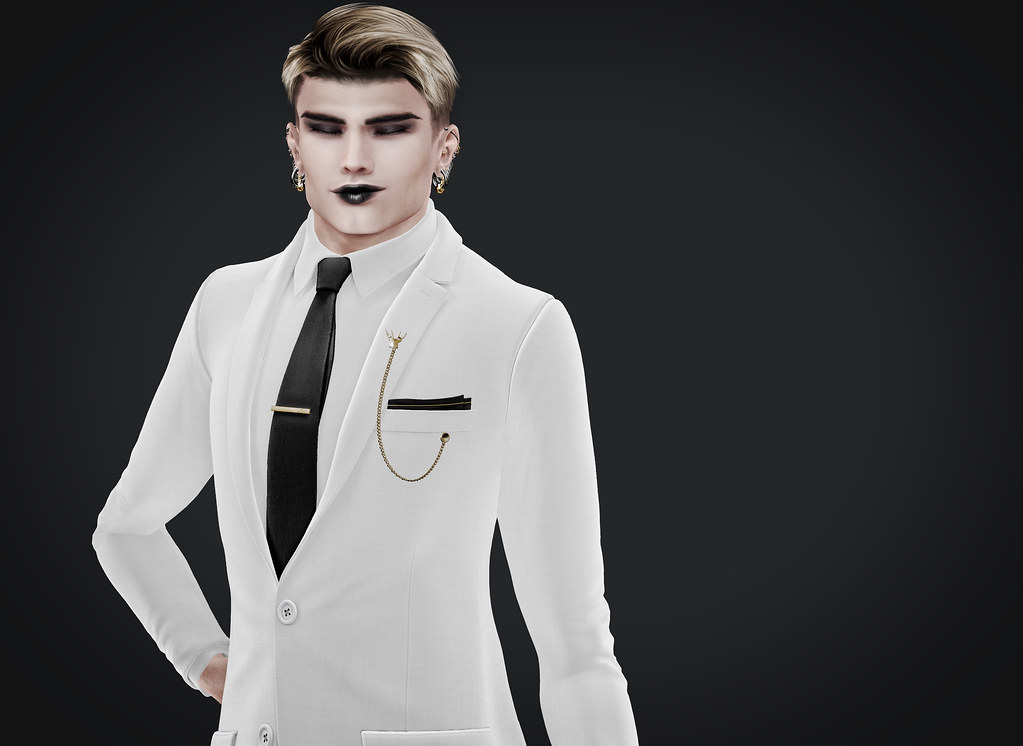