I don’t know about you, but I’ve accumulated a LOT of outfits over the years since the outfit option was introduced to Second Life. At last count I have some 300 or so system-based outfits tucked quietly away in an ‘old outfits’ sub-folder. Out of sight, out of mind, as it were. And on top of that I have something in the region of 150 or so mesh-based outfits.

Yeah, that’s a lot. And while I’ve been documenting on Flickr everything that I wear, it’s about time I broke down those older outfits as part of my Lost in Inventory series, wherein I try to reduce my somewhat insane inventory count. Okay, it’s something of a pathetic effort, to be honest. I reduce the count by 1,000 or so… aaaaaand then I go shopping again. What can I say?

I mostly use those old Flickr images as an aide-mémoire, to help me find stuff again in the morass of my inventory. I have a pretty good memory for which store I got something at—even going back some ten or so years—but what those things are actually called can sometimes escape me, hence referring to my Flickr images. But I have a lot of images on Flickr, and even though they’re organised into albums it can take a while to go through them all to find the exact item I’m remembering (not to mention Flickr’s predilection for hitting its users with Unexpected Bad Pandas when they most need the service to be quick and efficient, which ironically was happening when I was trying to put this post together).

So, what I thought might be fun, though, is to re-shoot those outfit images for the blog, starting with some of the older system, sculpt, and early mesh outfits. Some of them I do want to recreate with mesh and BoM, as part of my BoM Redux series, but for most of the outfits I’d just like to take a couple of clear shots in good light, against a white background, and add a credits list for my own reference before I break them down and get rid of the links. I may even add some commentary to them, since I’m sure at least one or two will fall into the “What the hell was I thinking?!” category. That said, there may be quite a bit of ‘normo’ stuff in here, since in my early days of SL fashion there weren’t as many amazing avant garde items available as can be found now. However, what I could do back then (and can now do again, thanks to Bakes on Mesh) is raid the ladies sections of stores for things like system pants, because I honestly never really gave a toss whether some hyper-macho dude pointed and laughed and snarked that I must be tucking. Bitch, please…

So, settle down for the start of a long journey through the depths of Skell’s closet. You won’t be seeing any mesh heads or bodies for a long time in this series, so it’s system phiz all the way. Kludgy system fingers will probably be a given (assuming it’s not a later outfit that features Slink mesh hands), and while I’ll edit out the worst of the thumb spikes and nose triangles (I have some sense of pride, damn it!) for the most part WYSIWYG.

Outfit 01. A hybrid can withstand these things

This is a later look, featuring Slink Dynamic (Bento) hands. I really liked this one at the time, although I was never happy with the boots. I remember spending bloody ages trawling my inventory for boots that would work with the tight cuffs of these pants, and after trying about 60 pairs these were the only ones that worked. This is one look that I may re-do as a BoM Redux. 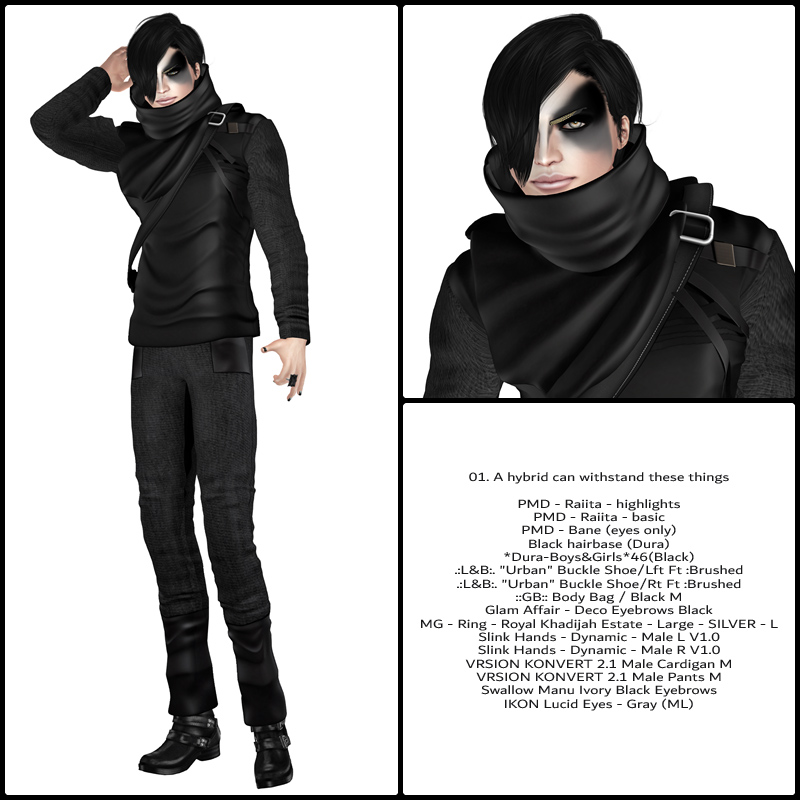 This was a simple look, designed primarily to display the crown of thorns (which has a rather staggering complexity of 41,538). But boy did re-wearing this outfit give me conniptions, because it was made using really old static Slink hands and feet, which were—to my chagrin—still unpacked in my inventory and hanging around years after they were updated. Um… oops? Trying to apply anything to them saw them admonishing me in local chat, to the tune of, “Updates for feet and hands required and now available in store”. 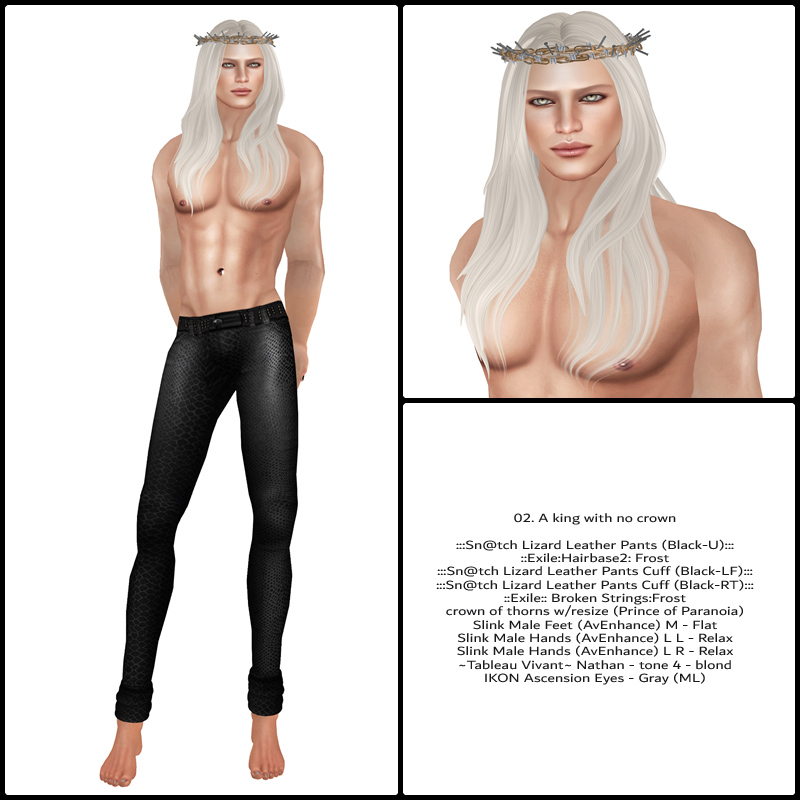 Here’s a little aside to those of you who have never known anything except mesh heads and bodies. This was what my torso looked like before I took that pic into Photoshop: 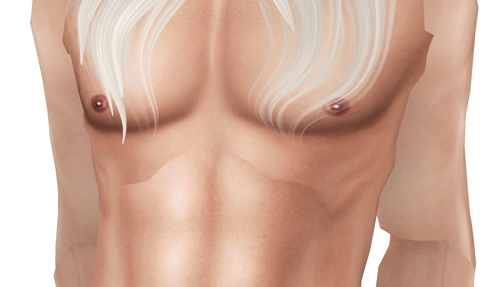 And you wonder why mesh bodies became so popular so quickly ;-)

Gah! I loved this when I put it together, and I love it still. That Schadenfreude male corset was an utter delight to find (it was one of my early mesh purchases). I’d love to rework this in a BoM Redux outfit, but I suspect the corset might not work with a mesh body. I’ll try it with Slink Redux and see how the alpha works against the torso. I later updated those fantastic Tamiron Forge outfits when they included Omega appliers, but I could easily use the BoM versions again. 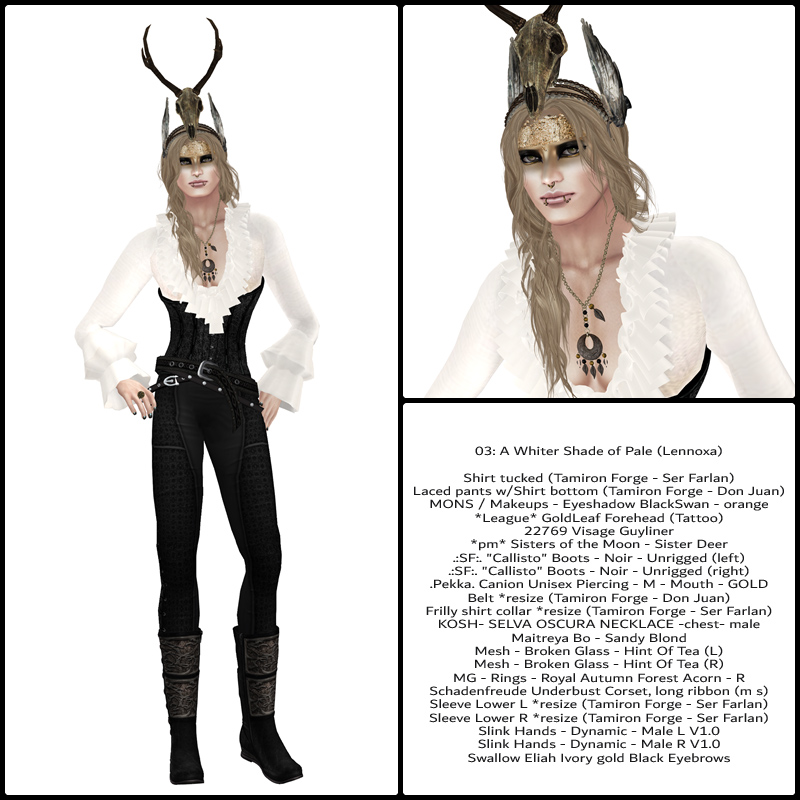 This is an interesting one; something of a hybrid. If I were to rework this now I possibly wouldn’t wear those jeans (amazing though they were and still are; DMC made the best system textured jeans in SL back in the day, and they still hold up in BoM format today). But I kinda like this one. I remember finding Noctis (still on the grid today and still making great gothic stuff, although with more of a focus on furniture) and when I found Pixel Box it turned out to be one of those rare stores where I spent a lot of money on my first shopping trip there, and even sent the creator a notecard thanking them for making such wonderfully unusual items.

Also, I wore those Lapointe & Bastchild belts to death (ironic, since this one is actually called ‘death belt’). They had a series of them—all sculpted—and I wish they would remake them in mesh, because at about 22,000 complexity they’re a bit high for everyday wear. They’re fantastic, though, for breaking up that ‘painted on’ look you get when wearing system clothing via BoM. 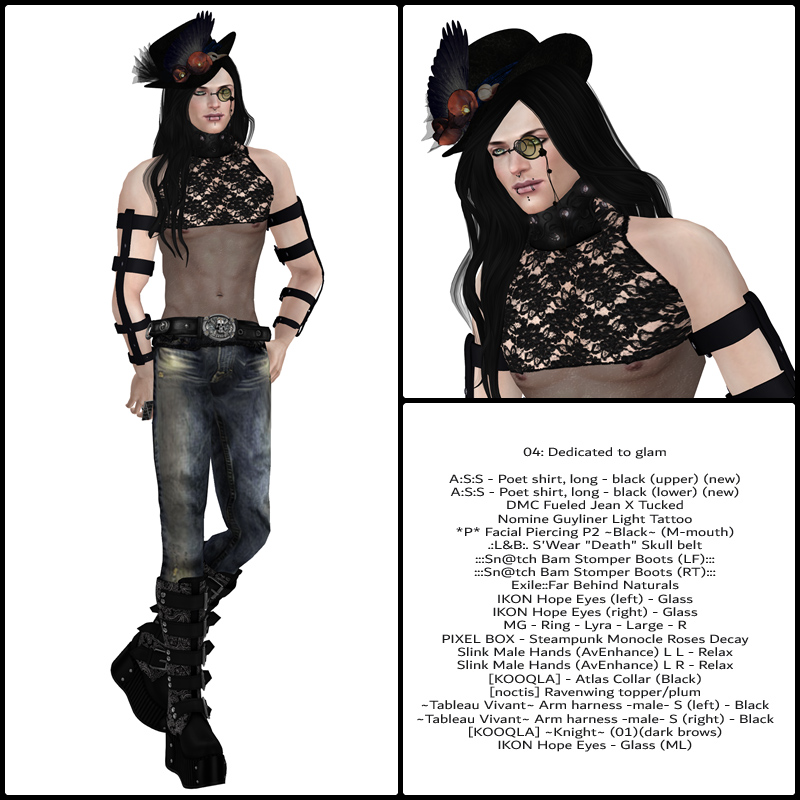 This one was so-called because it literally was me playing around with random stuff. I tried out layering two different hairstyles, as well as wearing female-rigged mesh pants on a male body (with the waistband covered by the jacket). Not one that I’ll ever wear again on Skell, but I’m going to make a point of trying those pants on Syd.

This one may be system, but it’s definitely very recognisable as the Skell of today. I think I pretty much lived in this Aeros skin for a year or so anytime that I was ‘off duty’ from the whole fashion thing. I tend to have a small selection of ‘go to’ outfits that I change into once I’m done with a fashion shoot, and this was one of them back in those days. Again with those DMC jeans, and the boots from J’s that so many people had and loved. This is another one I’m going to try a BoM Redux version of. 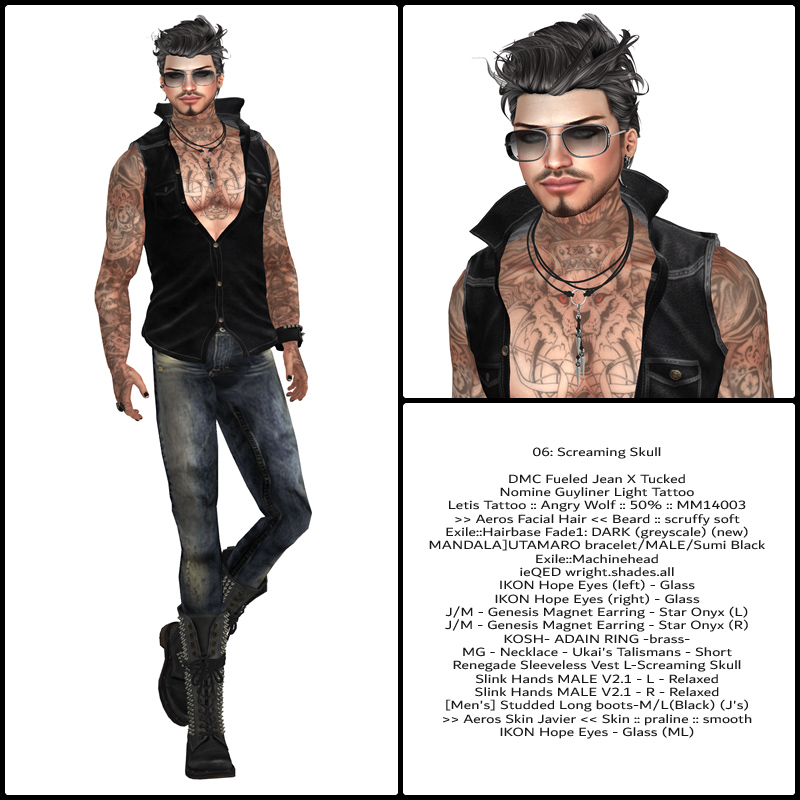 Yeah, I knew I was going to close this post with this outfit. Just like Mother Monster, I am still in love with Judas ;-) This outfit is a longtime favourite, and another one on the list to be given the BoM Redux treatment. It’s probably the oldest outfit featured in this post, since it doesn’t even contain mesh hands (lookit them thumb spikes and clonky knees and the hip/butt join! Eurgh…) and I layered like stink on it. Ah, those were the days, when a jacket comprised seven separate items! 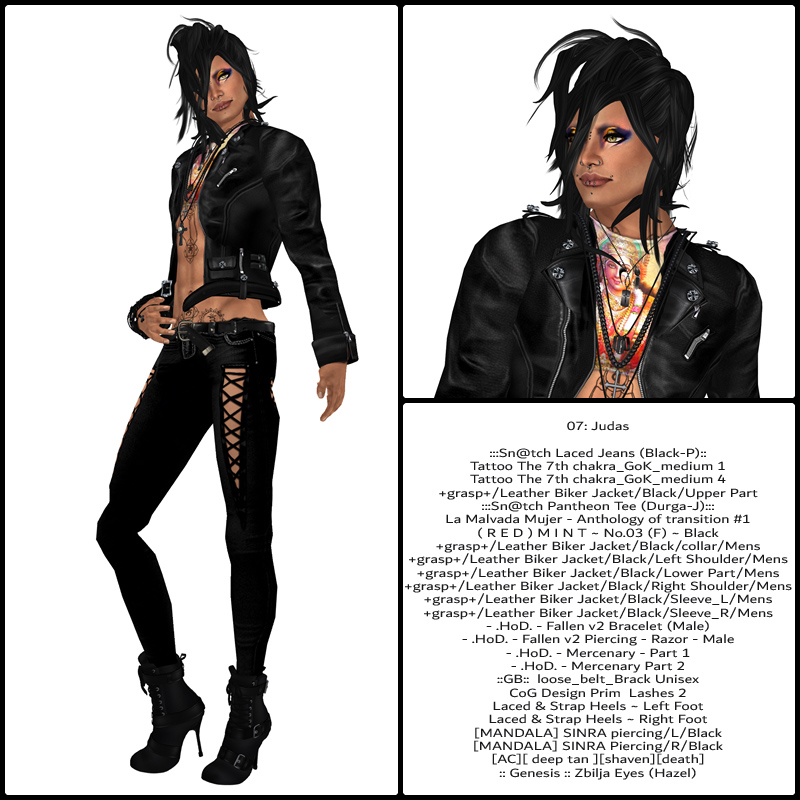 Hopefully you’ve enjoyed this little dig through my virtual closet. It was a little bit more hassle than I realised it would be, mainly thanks to the fact that so many older parts of the outfits had either been deleted or packed away, but also thanks to yet more asset server issues today. As I write these words, the post is almost ready to go, barring the header image. I need to rez a no copy, L$800 gacha rare in order to shoot that header image, and there’s no way I’m risking that when there are asset server issues and even trying to wear my Signature body gives me a ‘failed to rez object’ error, so I’m going to save the draft of this and come back to it tomorrow, when—with a bit of luck—everything will be sorted.

Once the grid is sorted and this post is published I’m going to go back into my inventory and check each item in those outfits, to make sure it’s not a No Copy one (which many of those earlier items were). Once each oufit is checked, I’ll be deleting all of the links. It’s going to be a slow process, but it’s long overdue (like… ‘since 2015’ overdue) and it’s one of those inventory-sorting tasks that I’ve been procrastinating on for too long, purely because it’s going to be a hassle. Time to knuckle down, though, and get stuck into it, and if I can get some blog posts out of it while I rediscover tons of great old system stuff, then that’s all to the good.